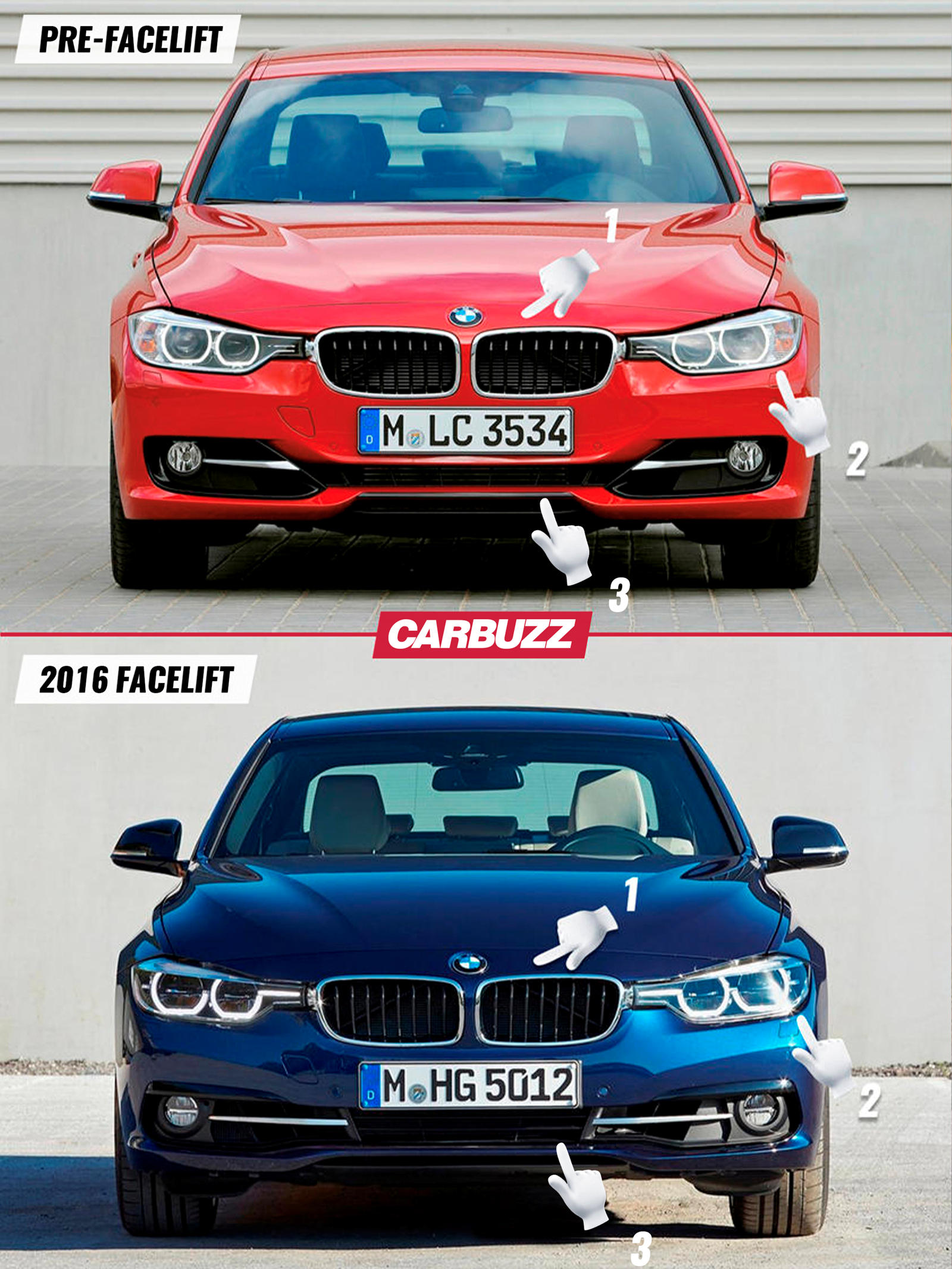 The Bavarian brand gave the 6th-gen BMW 3 Series a substantial update for the 2016 model year. On the outside, a redesigned front fascia includes wider kidney grilles 1 and redesigned headlights 2, making full-LED clusters available for the first time. The bumper is an all-new design with the "V" theme extending all the way down to the bottom in the M Sport-equipped trims, bisecting the lower air dam. The lower air dam on the base trim is bigger and doesn't narrow as much in the middle 3. The Wagon received the same treatment front and rear. 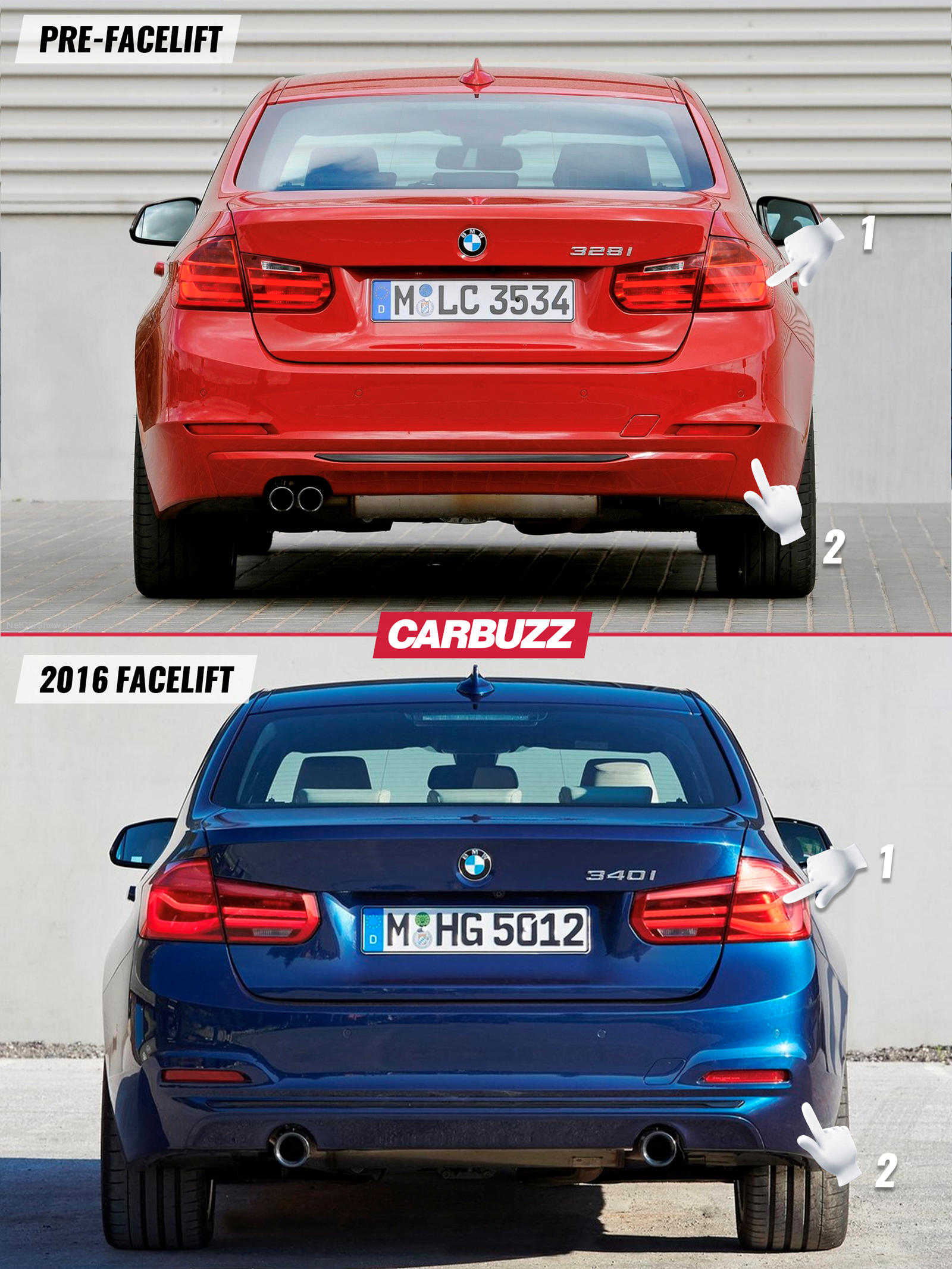 LED taillights can be found at the back 1, as can minor changes to the bumper design 2. The backup lights move from the top to the bottom of the trunk-lid-mounted clusters. New additions to the color palette include Mediterranean Blue Metallic, Platinum Silver Metallic, and Jatoba Brown Metallic. 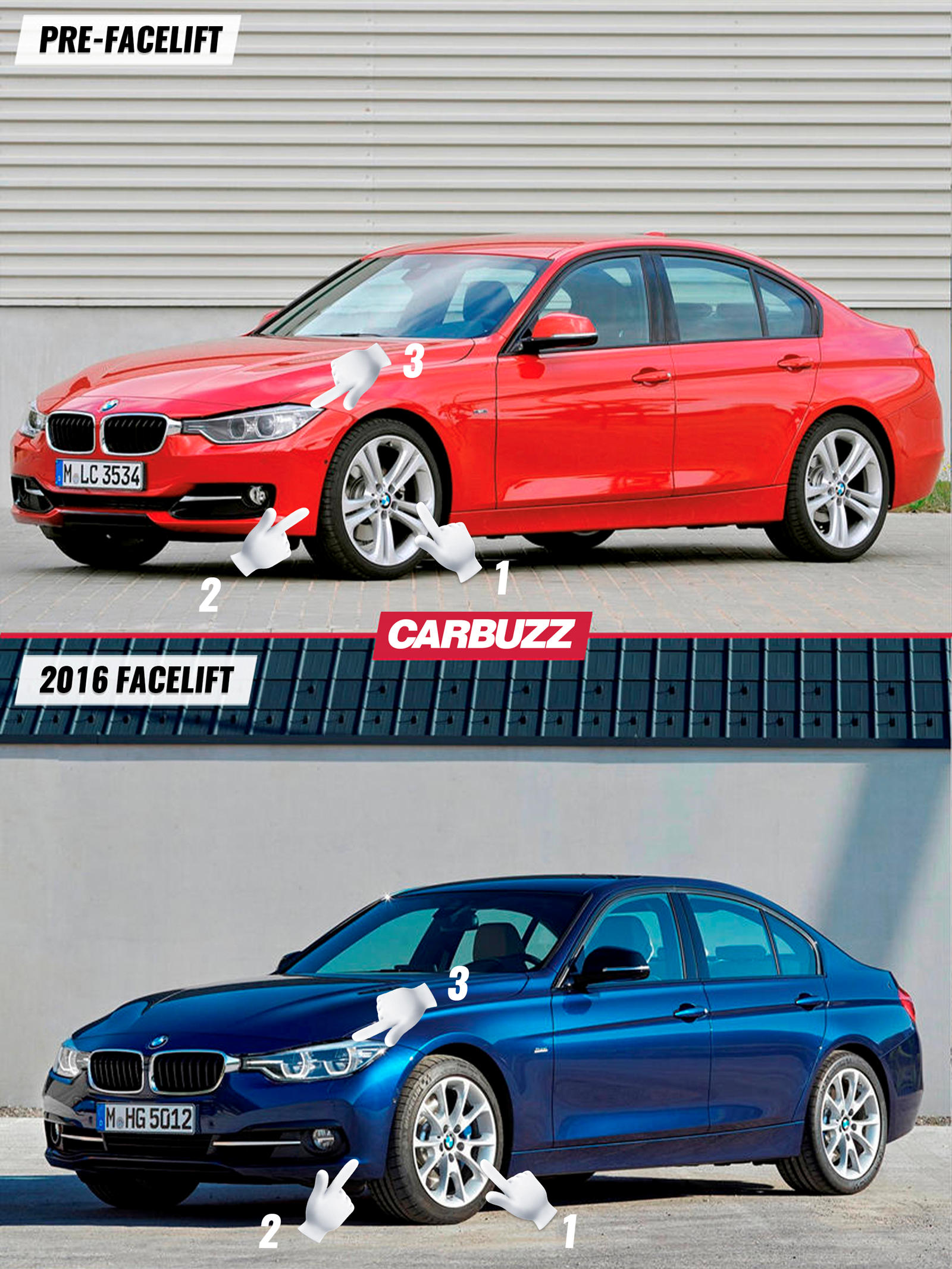 The profile is hardly changed at all and the only changes that can be spotted are some new wheel designs 1 and the changes to the front bumper 2 and lights 3. 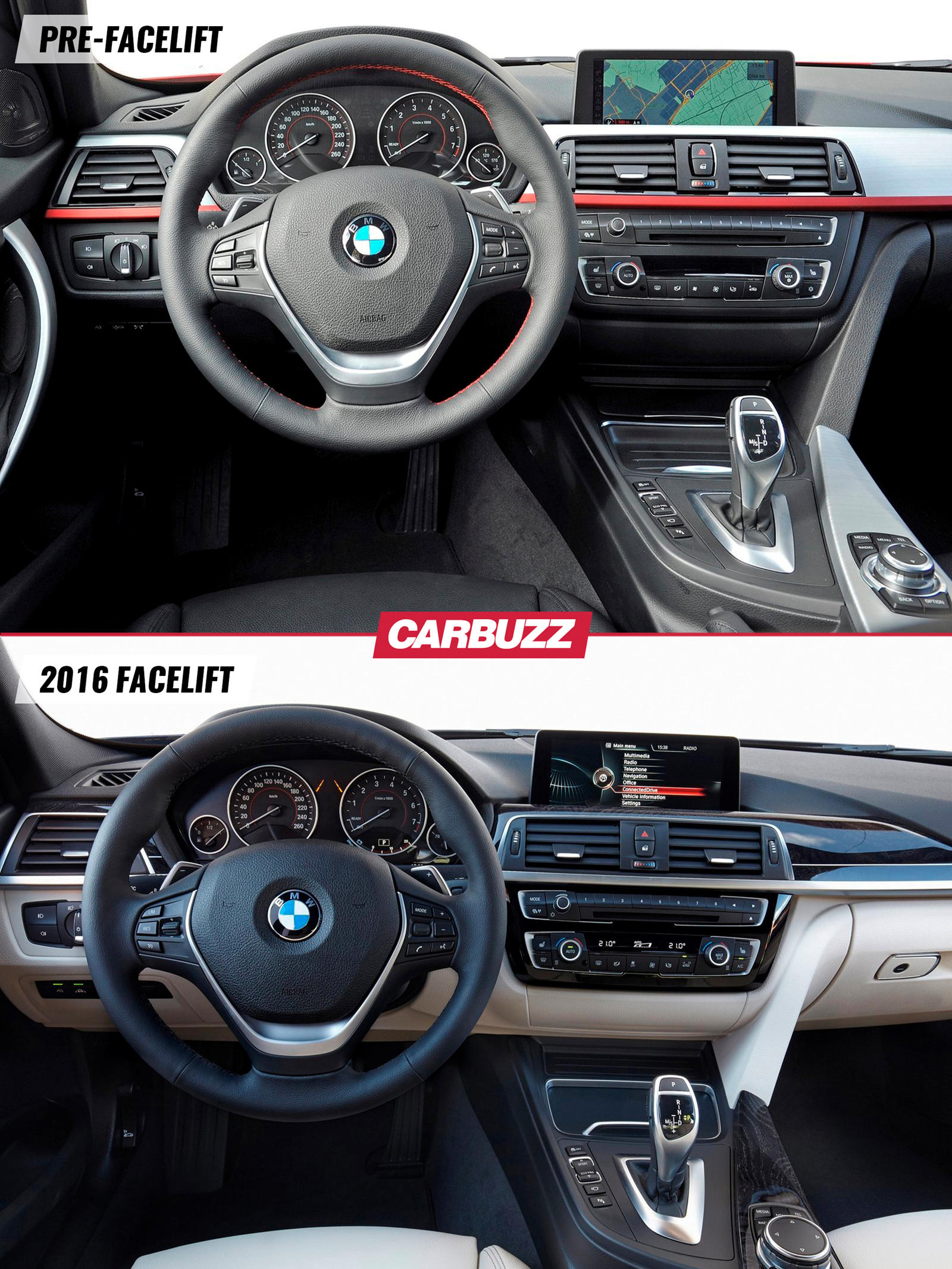 The last of the key changes center around standard specification, with the contents of the Sport Line specification included as standard. Leather availability was broadened, and the Premium Package is enhanced with Comfort Access, lumbar support, a power moonroof, and Sirius Satellite radio - all standard on the 340i.

The 6th-generation BMW 3 Series is available with several engine options. Not all the engines were available throughout the 3's lifecycle, as some engines were dropped, and others were added. The Wagon is only available with two engines. Pre-facelift models are equipped with either the turbocharged four-cylinder gas or diesel engine. The 328d remained throughout the Wagon's lifecycle, but the initial 328i was replaced with the more powerful 330i like the rest of the range. Most of the changes happened in 2016 when the 3 Series received a significant facelift. Beneath the skin, the changes are more substantial. The upgraded suspension includes new front struts, rear dampers, and a redeveloped electric power steering system. There's also an all-new family of engines, the B48 and B58 replacing the N20 and N55 engines, respectively. With this, BMW rechristened the 335i the 340i. The ZF eight-speed gearbox received revised tuning, while the six-speed manual on the 340i gets a dual-mass flywheel for smoother gear changes.

The available engine options for the 3 Series are as follows:

Looking at what's available on the used market, most customers chose to avoid the manual option available for the gas engines. The eight-speed automatic was a lot more popular, so we'll focus on that. Given the performance potential, all models come with impressive claimed EPA estimates and even more impressive real-life figures as you can see in the table below.

The Wagon is a little heavier than the sedan, but it makes no real difference to the fuel consumption figures.

German manufacturers tend not to include advanced driver-assistance systems as standard. Once you start shopping around, it's worth checking whether the previous owner added the Driver Assistance Plus Package (only available post-facelift), which came as standard with speed-limit information, active driving assistant, lane-departure warning, forward-collision warning, pedestrian warning, city-collision mitigation, active blind-spot detection, and side- and top-view cameras. The basic standard features you'll find on all models include automatic headlights, rain-sensing wipers, and active and passive safety features like six airbags, traction and stability control, and ABS.

Most models in the 3 Series range came with a baseline specification, such as climate control, a rearview camera, an infotainment system operated via iDrive, and the previously mentioned safety features. BMW did this so buyers could spec their own cars. This meant they could buy a 340i with fewer features at a reasonable price, or equip a 330i with loads of features while keeping the price relatively low. The 2015 F30 gets standard Bluetooth audio streaming across the board and the 2016 facelift has improved suspension to optimize the ride and handling. Packages and options were shuffled around every year, with most of them being available on the top trims. 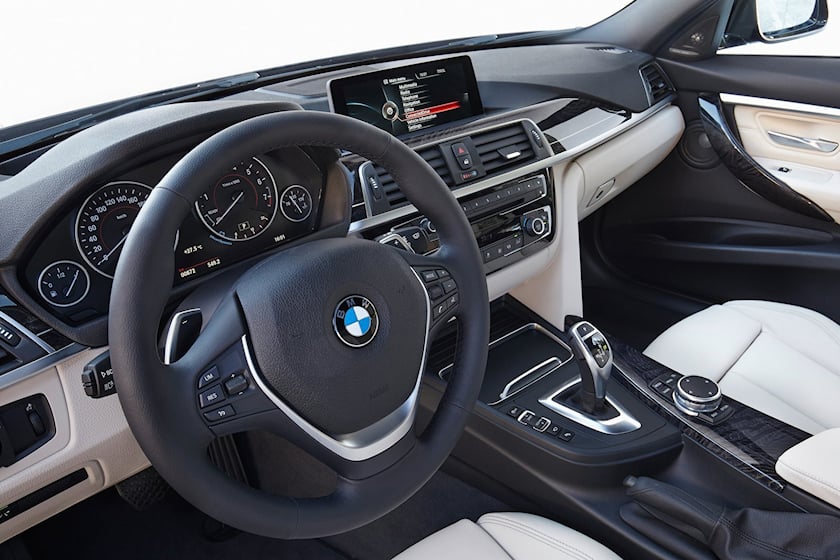 BMW kept the standard features on the 3 Series to a bare minimum, which means there's a good chance you'll find a 335i or a 340i with cloth seats. Most people opted for the optional leather, which was available in the standard black, white, tan, and red. The F30 3 Series does not have the best reputation when it comes to interior quality. BMW ensured that the surfaces you interact with the most are covered in high-quality materials, but if you look closer you'll spot some cheap plastic.

The 13 cubic foot trunk is a nice addition. It can easily swallow two golf bags, a week's worth of groceries for a family of four, or the same family's luggage on a weekend away. The latter will require some careful packing, however. While BMW marketed the car as a five-seater, it's not. The rear middle seat has no legroom, which makes this a strict four-seater. If you want the ultimate in practicality, look no further than the Wagon. You'll only find this model with the 328i, 328d, and 330i engines, which come with a premium. For additional useability, the Wagon is only available with BMW's stunning xDrive AWD system. Good luck trying to find one, as the average car buyer seems to be allergic to wagons, opting for a crossover instead.

The Wagon retains the trademark BMW interior but obviously adds a much bigger trunk. The 17.5 cubic feet of storage space behind the second row is extremely useful. Fold the second row forward, and you get 53 cubes to play with. Cargo is more exposed in the Wagon, but a cargo cover is included as standard. Ensure you get this cover if you decide to purchase the vehicle. It's one of those things the previous owners might have removed to fit a bicycle, and forgot to put back in. You don't want any prying eyes looking at your valuables.

BMW's dealer network is not that large, but there are hundreds of independent specialists all around the country. If you do plan on using an independent service center, ensure they have the right diagnostic equipment. An average annual service costs anywhere between $150 to $400, depending on where you go. A major service can cost anywhere between $1,000 to $3,000. According to the BMW forums, the average cost is around $1,400 to $1,700 per year. This is definitely one car where a third-party warranty is recommended. Warranties are available for cars that are less than 15 years old. If the car you're looking at falls within that bracket, go for it.

There is no standard tire size for the F30 3 Series since so many options were available. A 320i comes with a basic 16-inch rim, while the M Sport package adds larger rims and wider tires.

F30 models are infamously equipped with run-flat tires, but you don't necessarily have to go that route. Run-flats are notoriously stiff, so we recommend going with a basic tire repair kit and insurance with roadside assistance. We do recommend that you stick with the same tire size and wheels.

The various standard and optional tires for the F30 3 Series include:

These are the error codes you'll most likely encounter when shopping for a sixth-generation BMW 3 Series:

There are several known 2012-2019 BMW 3 Series problems, but there is one failsafe way to avoid most of them. According to various BMW forums, buying a used F30 3 Series with a full service history is the safest bet. Check that all fluids have been changed, especially the transmission fluids on earlier cars. Here's another hot tip: buy a model with services that took place before reaching the scheduled intervals. These cars preferred preventative maintenance instead of regularly scheduled maintenance. There were a few persistent problems with the earlier N-code engines and we list them below. The later B engines are all-new, with robust closed-deck engine blocks made for high-boost turbocharged applications and so far, they seem to last well, but they're still quite new and one would have to keep an eye on them to see whether they develop the same problems as the N engines.

We found a few complaints about AC or air conditioning problems, but not enough to be considered common compared to the number of cars BMW sold. It's worth keeping in mind that the very first F30 models are now more than ten years old, and at some point, the AC will need a freon recharge. There were some complaints about 3 Series steering problems, but in most cases, the car just missed a service where the power steering fluid needed to be changed. There were some fuel-pump failures on the four-cylinder engines, but too few to warrant great concern. Random electrical problems can occur and the iDrive can be prone to bugs, although this is usually easy enough to fix with a software update.

There are a few models to avoid. First and foremost, avoid the diesel. It had expensive problems, and you'll struggle to get parts for it. The N20 engine in the 328i and 320i is a bit fragile and we'd avoid it unless we had proof the timing-chain system has been replaced with updated parts. The ActiveHybrid 3 makes no sense, and the same goes for the 330e. The all-electric range is not impressive or usable, and the cost of replacing batteries after ten years or so is high and unlikely to be recouped in fuel savings.

For once, the fun model is the one to have. The 340i's upgraded 3.0-liter turbocharged six-cylinder is robust, and it's fun to drive. While most Bimmers of this era are sparsely equipped, BMW at least provided a power sunroof, LED headlights, satellite radio, and a premium sound system. Since it's a facelifted model, it also comes with Apple CarPlay, which you can use for live navigation via third-party apps. It's just a pity this engine was never offered in the Wagon because we'd have one of those in a heartbeat. If you can't stretch the budget that far, opt for a 335i. Just keep an eye out for a model that has been well looked after.

The 6th generation 3 Series was a big departure from all the 3s that came before. It lost a bit of its edge, especially at the bottom end of the range. The six-cylinder models still provide plenty of thrills, however. While there are a few models to avoid, the most fun model is the one to have. The interior tech will be one generation behind what's available these days, but Apple CarPlay and mobile data will make living with it so much easier. The F30 3 Series is also large enough for a small family, and practical enough for the daily grind. If you want something a little bigger and more stylish, it's worth having a look at the BMW X3 from the same vintage, as it used the same basic platform and engine options.