The big news this week from the lunatics at Bugatti is that the insane Bolide experimental hypercar concept was so often asked over by customers that the French automaker has elected to build a few for purchase. It's not just potential customers that love the Bolide either, as it was voted the most beautiful hypercar of the year despite being little more than a concept. As a limited edition with zero chance of being legal to drive on the road, the Bolide is not the kind of machine you would have expected to come to life, but here it is, so let's see what we might expect when it arrives in 2024.

The experimental study of the original Bugatti Bolide was created "as a racetrack-oriented hyper sports car" with minimal bodywork and maximum downforce. It's not all just for drama and headlines - this car's lightweight construction pays homage to Bugatti's motorsport exploits of the 1920s. It looks like a roadgoing Formula 1 car and has a dimpled scoop on the roof with a world-first morphable outer skin, a massive rear diffuser, and a crazy rear wing all built to enhance performance through better aero efficiency and thus traction. More exposed carbon fiber is visible here than on any other Bugatti, but there's still a traditional color split, of which various configurations will be available.

At the front, X-shaped running lights are unlikely to shine much light on the road ahead, but this is a racecar so that doesn't matter. Centerlock forged magnesium wheels aim to suck hot air from the ceramic braking system while the full-width wing at the rear extends past the highest point of the strip LED taillights that converge on a quad-exit exhaust finisher. This looks a lot like an enlarged Lego block or an alien cannon. The central fin that meets up with the wing is just as dramatic as the fact that the wheels are partially covered by the wing and have the diffuser taking up part of their width.

The whole thing looks mental and we hope there will be few changes if any in final production form. As a track car, we feel optimistic that the design will remain radical.

With the same 8.0-liter quad-turbo W16, all-wheel drive, and seven-speed dual-clutch automatic gearbox found in other Bugatti products, the Bolide experimental would have had plenty of grunt with a stock engine. However, Bugatti wanted more. In the concept, 1,824 horsepower and 1,364 lb-ft of torque are achieved with the aid of "among other things" 110-octane racing fuel. However, in production form, the Bolide will only have 1,578 hp and 1,180 lb-ft of torque on 98RON fuel.

Simulations run on the concept in full weapons-grade spec suggested the Bolide could do 0-62 mph in just 2.17 seconds and get from 0-124 mph in 4.36 seconds. Top speed is estimated to be "well above" 310 mph, and Bugatti claims that the Bolide should be able to go from rest to its top speed and back to a stop in just 33.62 seconds. Expect these figures to worsen slightly with several hundred horsepower less on tap in production form.

That all sounds incredible, but "Bugatti's designers and engineers are currently honing the aerodynamics and handling, and are developing the Bolide in line with international FIA safety standards." That means that we could see some changes to the final product, and with the original concept featuring titanium fasteners throughout and some components made from 3D-printed aerospace titanium alloy, it could make sense for Bugatti to simplify the design somewhat. We hope that the changes, if any are visible, will be minimal, but we highly doubt that the finished product will be anything but spectacular.

What we do know is that the production car will weigh 3,196 pounds and will boast an automatic fire extinguishing system, pressure refueling via a fuel bladder, six-point harnesses, and a HANS system for maximum driver safety.

The Most Basic Bugatti Interior Yet

We haven't seen so few garnishings in a Bugatti cabin since the race cars of the Twenties, but we wouldn't have it any other way. Bugatti doesn't tell us much about this cabin, but we do see a small screen ahead of the U-shaped steering wheel. Various switches and buttons adorn this wheel and the minimalistic center control panel leading from the dash, and we also see what we expect to be rearview cameras in the exterior wings, suggesting that all interior rearview mirrors will be screens. We assume that the hidden tech will be the most important, and it's quite possible that drivers will be able to access varying power levels as they gain confidence behind the wheel.

Thanks to no airbags, no climate control, and no media systems, a massive chunk of weight is cut out of the car and the by-product is a clean and focused appearance. With weight-saving the core focus of this car, we expect that the driver seat will be specially molded to the driver, with the pedals and steering wheel likely to be the only moveable parts. A recent Instagram video from serial special edition buyer Manny Khoshbin suggests exactly this when he mentions that the cabin of the experimental car would not suit his frame and that Bugatti will custom-build it to his specifications.

Since the Bolide will be a track-only creation, Bugatti has "decided to offer exclusive track days for this extreme vehicle in order to guarantee a safe environment at all times and gradually introduce customers to the Bolide's breathtaking performance," says CEO Stephan Winkelmann. As a result, there isn't really anything that competes with the Bolide and there will likely never be a real-world comparative test against other limited-edition track specials. If we had to make a comparison, the only things that come close in terms of drama, exclusivity, and price, are the Pagani Huayra R and Lamborghini's Essenza SCV12. Both are down on power but are no less special.

So what does the Bolide cost? At current exchange rates, the asking price of €4 million equates to over $4.7 million. That's quite a pretty penny, but with only 40 set to be built, you can bet that the lightest, craziest Bugatti ever will only appreciate in value.

The most popular competitors of Bugatti Bolide: 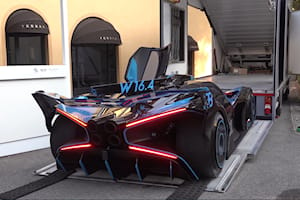 Video
15
Listen To The Unholy Sound Of The Bugatti Bolide's 1,850-HP Engine
This is just insane. 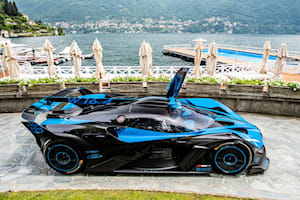 Concours d'Elegance
1
Bugatti Bolide Wins Another Award Before It's Even Launched
The French brand's classic cars also achieved greatness this past weekend. 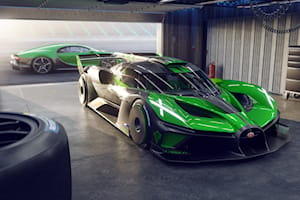 Supercars
5
Extreme Bugatti Bolide Is Already Sold Out
And that's not all that happened for Bugatti in 2021.