The 3rd-gen Chevy Silverado 1500 had a fairly short lifecycle, lasting only four years. That does not mean it's a bad truck. Nobody expected it to be replaced, but Chevrolet introduced the 4th generation as part of Chevy Truck's 100-year anniversary celebration. Thankfully, there was enough time for a facelift, which followed two years after the 2014 introduction. 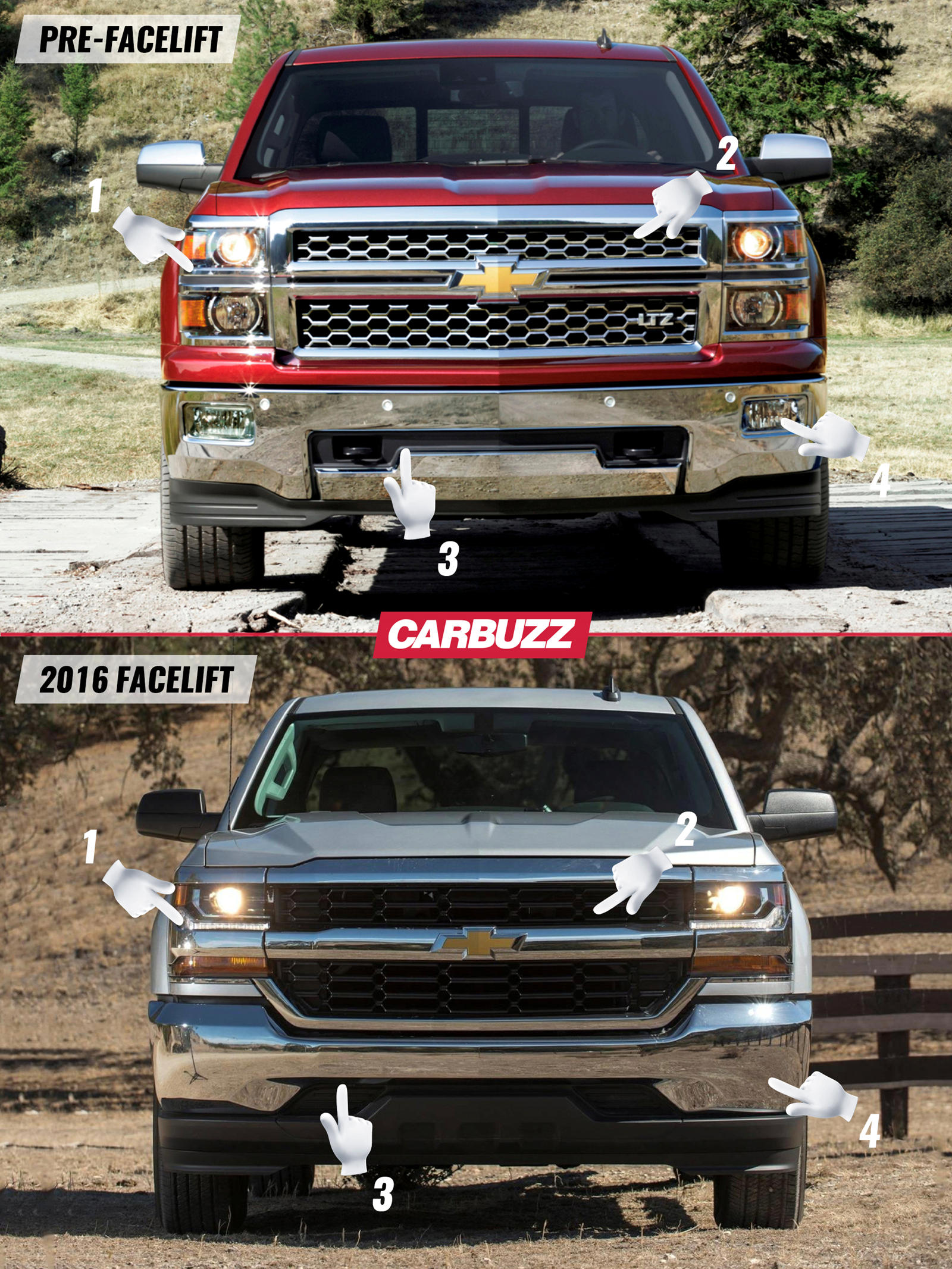 The design changes brought on by the facelift are most notable at the front of the 3rd-generation Silverado 1500. It has new front lights 1 and various different grille designs depending on the model you choose 2. Whatever the grille design, it cuts down lower into the front bumper than before 3. The pre-facelift's headlights use four identical units, with two above and two below the signature Chev grille crossbar containing the bowtie. The facelift makes the upper headlights the main units, with LED daytime running light strips set into their lower edges. In the lower slots, nothing but another DRL strip remains. Models with front fog lights have new upright units set higher up into a new bumper molding on either side of the lower air dam 4. 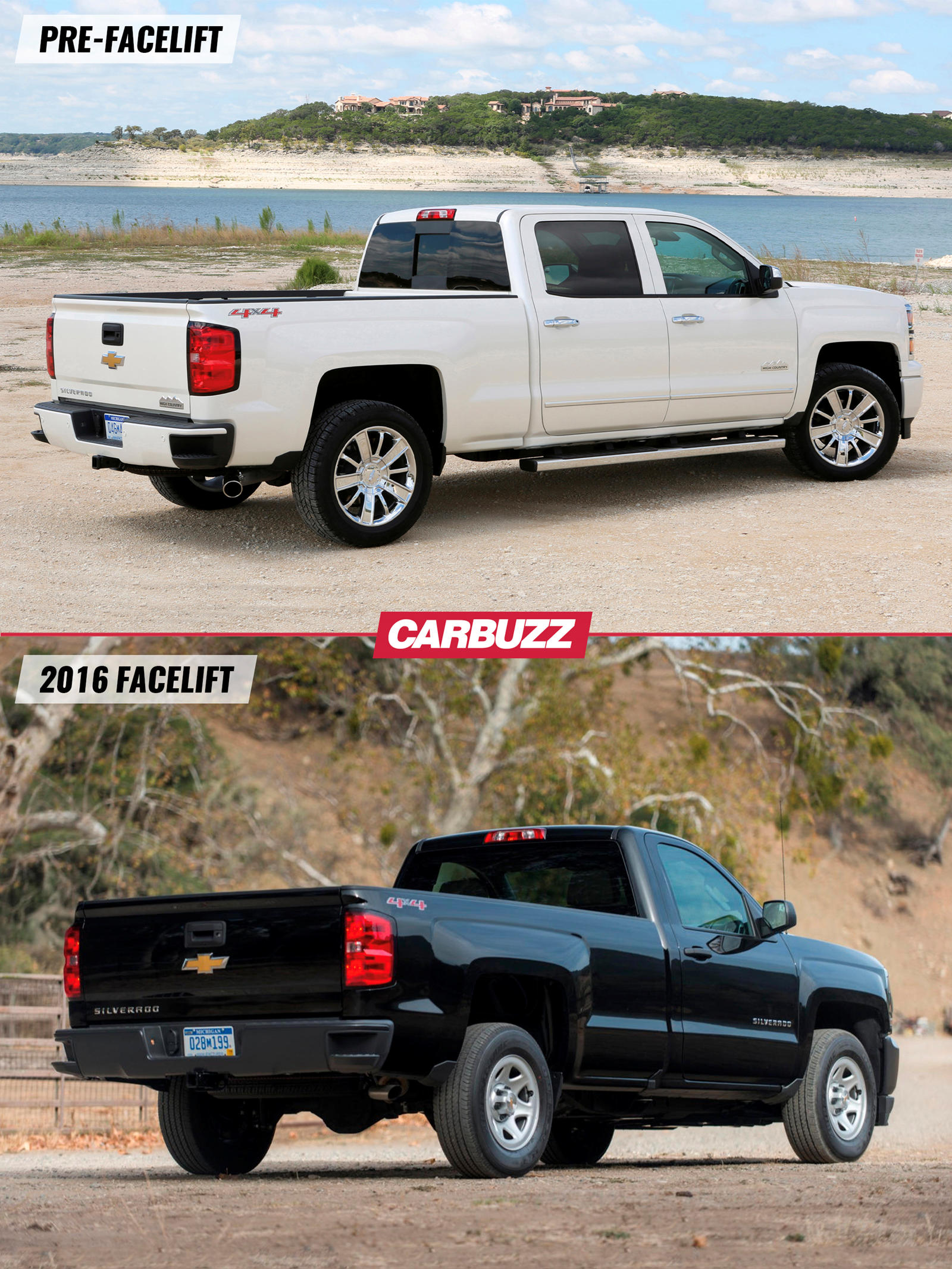 There are no changes to the rear of the truck and it is left essentially the same after the facelift and indistinguishable from the pre-facelifted model. 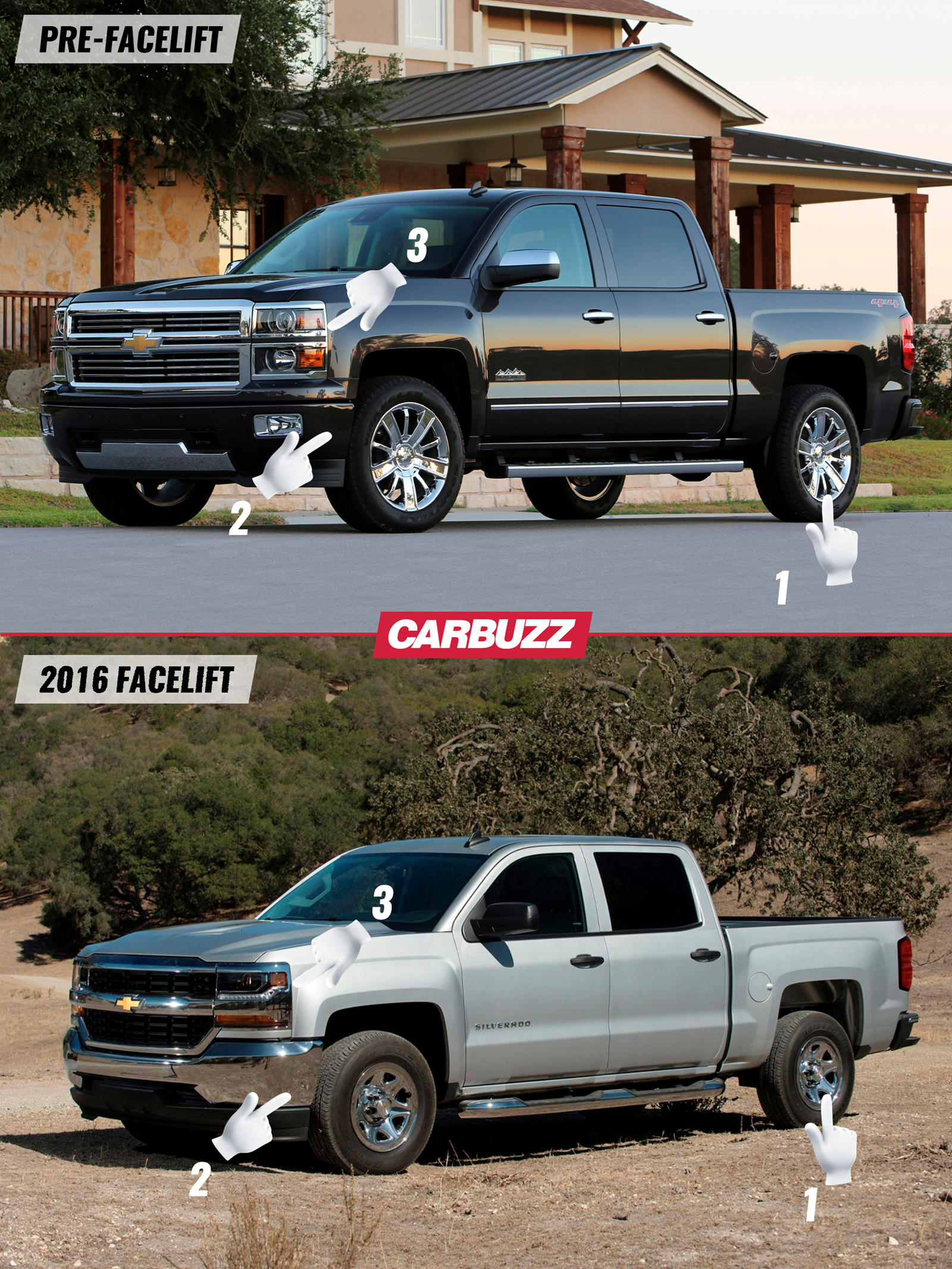 Chevrolet includes some new alloy wheels 1 and model-specific stickers for the Z71 package. No other changes are visible from the side except for the mentioned changes to the front bumper 2 and headlights 3. 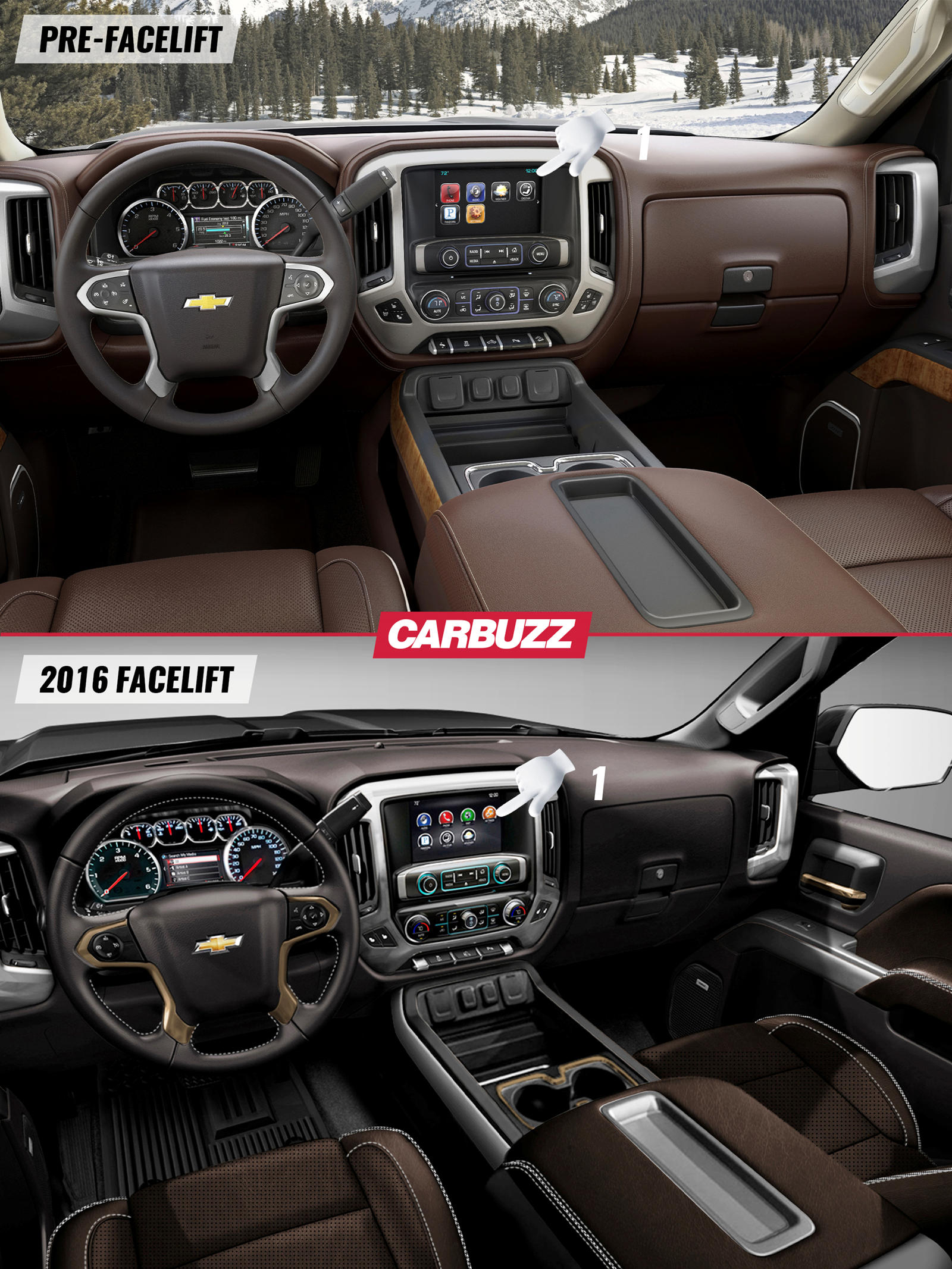 The look and layout of the facelifted model's interior are the same, but Chevy makes some software updates. All post-facelift models have quicker-reacting touchscreens capable of running Apple CarPlay and Android Auto 1.

It's also important to note that Chevy makes some important improvements after the facelift. Final-year models are all equipped with the larger seven-inch touchscreen interface, while the eAssist Package for the 5.3-liter V8 went nationwide following a slow rollout that started in California.

Before you even get to the trim section, you need to decide what kind of truck you want. Chevrolet offers a vast selection of models, starting with the basic body style. You can choose between Regular Cab, Crew Cab, and Double Cab. The Regular Cab is a workhorse with a 6.5 or eight-foot bed. The Crew Cab comes with four doors, seating for six, and a 6.5-foot bed. The Double Cab doubles as a workhorse and a family car, thanks to a luxury interior and 5.8-foot bed.

All models are available with 4x2 (RWD) or a part-time 4x4 system. There's no shortage of either on the used market. Explaining the engines is a bit tricky. Two are offered as standard, and one was optional. A 4.3-liter V6 is the standard engine, but a 5.3-liter V8 is an optional extra available to the entire range. From the top-spec LTZ trim, the 5.3-liter V8 becomes standard and a 6.2-liter V8 is optional. The V6 is mated to a six-speed automatic transmission. The 5.3 V8 is mated to either a six-speed or eight-speed automatic transmission, depending on the model year you choose. The optional 6.2-liter V8 is also available with a six-speed or eight-speed automatic, depending on the model year.

A big truck like this was never going to be fuel-efficient. The large capacity engines, wind resistance, and gearing all work against it. It is nice to see the V6 doing better than the EPA estimated, but that's just about the only good news available. There's no use looking at every single configuration's fuel consumption figures, so we'll rather look at all the engines in 4x2 and 4x4 guise to give you a general idea of what to expect. As for the mild-hybrid 5.3 V8, it only saves one mile per gallon on the combined cycle.

Most model years include the basic safety features, such as ABS, traction and stability control, and a host of airbags. On all but the work trucks, Chevy offers a safety package that consists of a rearview camera, park assist front and rear, lane departure warning, and blind-spot assist. The High Country comes with all of these features as standard. It's worth finding a car equipped with this package. The front and rear sensors make it easier to park a big truck like this.

The Chevy scored decent safety points without the optional safety equipment - the full five points in all but the rollover test. These scores are applicable to all models, including the work trucks.

Once you've settled on a body style, engine, and drivetrain, you need to select a trim. Thankfully, the trim levels are easier to understand and applicable to most cars. Some trims are limited to certain body styles. You can't, for example, have a Regular Cab in High Country specification. 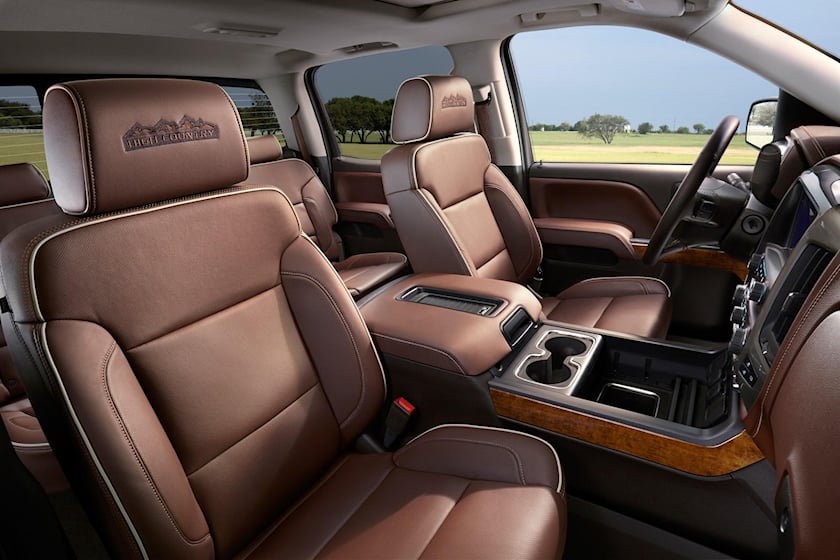 There are nearly as many interior configurations as models. The Regular Cab and Crew Cab both have the option of a three-seater bench or two separate seats in the front. That means you'll find both five-seat and six-seat Crew Cabs out there. Interior space is acceptable on all models. The rear legroom in the Crew Cab is a little tight, but that's why the Double Cab exists.

Naturally, trucks are practical by nature. Chevy's selection of optional accessories for the bed isn't great, but there are several third-party companies that will sell you all sorts of stuff to make the bed easier to access and live with. All models haul a proper load, and the High Country with the short 5.8-foot bed has the lowest load rating at 1,770 lbs. If you are looking at buying a truck for work and family life, it's worth noting that the rear seats in the Crew and Double Cab models can fold forward to create a safe interior space

The Chevrolet Silverado is one of the cheaper trucks to service thanks to locally sourced parts and a large dealer network. It's still a truck, though. During the first six years of its life, the routine services cost between $343 to $900, depending on what needs to be done. Following that, you get hit with big bills for more labor-intensive services. A major service, where parts like the serpentine belts have to be replaced and the clutch has to be lubricated, can cost up to $2,300. These hefty bills only come around every six years or so, so you'll want to buy a car with an up-to-date service history where the previous owner took the knock for the big service items. The automatic transmission's oil should be replaced every four years or 45,000 miles.

There are four tire sizes related to the 3rd-gen Chevy Silverado. The size depends on the trim. For the purposes of this article, we removed the eco tire option and focused on the all-seasons. Chevrolet equipped most models with General Grabber ATs straight from the factory.

There were plenty of recalls for the 2014-2018 Chevrolet Silverado 1500. All models produced between 2014 to 2018 were recalled in 2021 for a driver's seatbelt tensioner cable that may separate. All models were also recalled for a software error that may cause unintended braking and a vacuum pump that may decrease power brake assist.

Models produced between 2014 to 2017 were recalled for front airbags that may not deploy, and a temporary loss of electric power steering. 2014 to 2015 models were missing a compressed natural gas sticker and an ignition lock actuator that may bind.

Early 2014 models were recalled for contamination of the chassis electronic module, front seats that may not remain anchored, a transfer case that may shift to neutral, floor mats not being properly secured, missing warning chimes, tie rod separation, a transmission oil line that wasn't properly seated, an incorrect transmission position indicator, substandard head restraints, and a passenger airbag that may not fully inflate.

2015 models have the same problems, with the addition of a brake pedal that may come loose. The 2016 MY was recalled for upper control arms that may have insufficient welds and intermittent failure of the audio warning system. The 2018 model is the least problematic. No new recalls were issued for this model year, and all of its recalls were only issued after the model had gone out of production.

Silverados produced in 2014 were recalled for exhaust components that may overheat and melt plastic components installed nearby and for a faulty transmission oil cooler line that could leak. 2015 models were also recalled for a transmission position indicator fault that may not show the truck has engaged first gear, thus limiting the speed.

Silverado models built from 2015 to 2016 were subjected to a recall for the roof rail airbag inflator that may rupture and an inflator endcap that is at risk of detaching. Certain 2016 models were subjected to a recall for an airbag computer housing that is susceptible to fracturing and may obstruct the deployment of airbags in the event of a crash.

Since the 2014-2018 Silverado was subjected to so many recalls, you want to pay extra attention to ensure that previous owners returned the car to the dealership to have everything fixed. There is just one error code you'll most likely encounter when shopping for a 3rd-generation Chevrolet Silverado 1500:

There are no serious Chevrolet Silverado 1500 4.3 V6 or 5.3 V8 problems beyond the recalls. A few owners complained about excessive oil burning and serpentine belts wearing out early, but when you compare the number of models sold against the complaints, these count as less common problems. The only other problem that popped up is a TPMS problem, otherwise known as a tire-pressure monitoring system. 4x4 models may also struggle with a poor transfer case position sensor that may fail. This would bring up a message saying that the system needs a service, but the sensor will just need to be replaced. It's also possible that the speedometer and other displays on the instrument panel may work erratically. If this is the case, you'll need to repair or replace the unit. Low-speed brake failure may also be a concern for some Silverado models. It is understood that this is due to a brake vacuum pump.

Since most of the automatic transmission problems are related to the six-speed gearbox, we'd avoid that and find a model with the newer eight-speed transmission. The V6 is probably going to be inadequate if you plan on hauling and towing big loads, while the 6.2-liter V8 is probably overkill for all but the most strenuous tasks - and it will also be more expensive.

With the six-speed transmission ruled out, that leaves the facelifted LTZ, High Country, or Z71. The 5.3-liter V8 is fine, but the 6.2 V8 is obviously a lot more entertaining. The former engine is more readily available, but it's worth looking around for the larger one. The LTZ and High Country trims are way more luxurious than the rest of the range. If you're looking for a work truck, we'd also stick with the facelifted model. The safety and comfort features included as standard from the facelift onwards are well worth the extra cost.

The 3rd-gen Silverado is one of the most sought-after used vehicles there is, and it reflects in the pricing. Prices haven't dropped that much from new, but you will still save a decent amount. The only real mechanical problem you need to avoid is the gearbox, and that's simple enough. It's easy to see why the Silverado is one of America's favorite trucks, as it ticks all the right boxes.