The second-gen Durango received its sole facelift in the 2007 model year and the changes were most noticeable at the front, which was quite substantially changed. 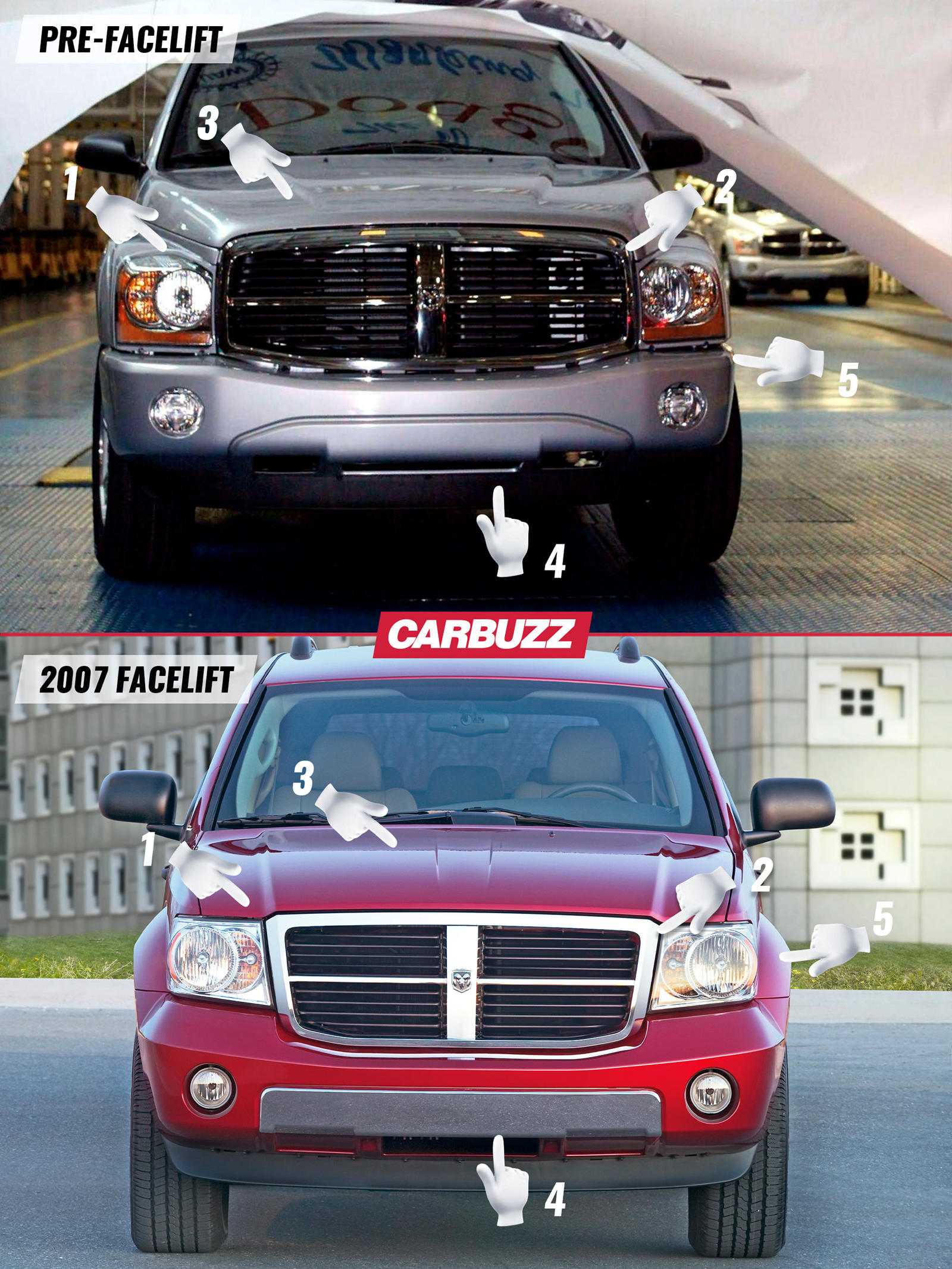 The 2007 model's front end is cleaned up and the bug-eyed headlights of the pre-facelift are replaced with higher-mounted, more squared-off units with round outer headlight reflectors 1. The grille has a thicker border and cuts into the bumper more sharply 2. The clamshell hood is gone and its shut lines now sit on top of the fender 3. The bumper is also new, with sharper creases and a more pronounced and angular plastic panel in the lower valance 4. The new front fender treatment can be seen clearly from the front, with the front wheel-arch flare now mirroring the rear one by curving down into the bumper 5. 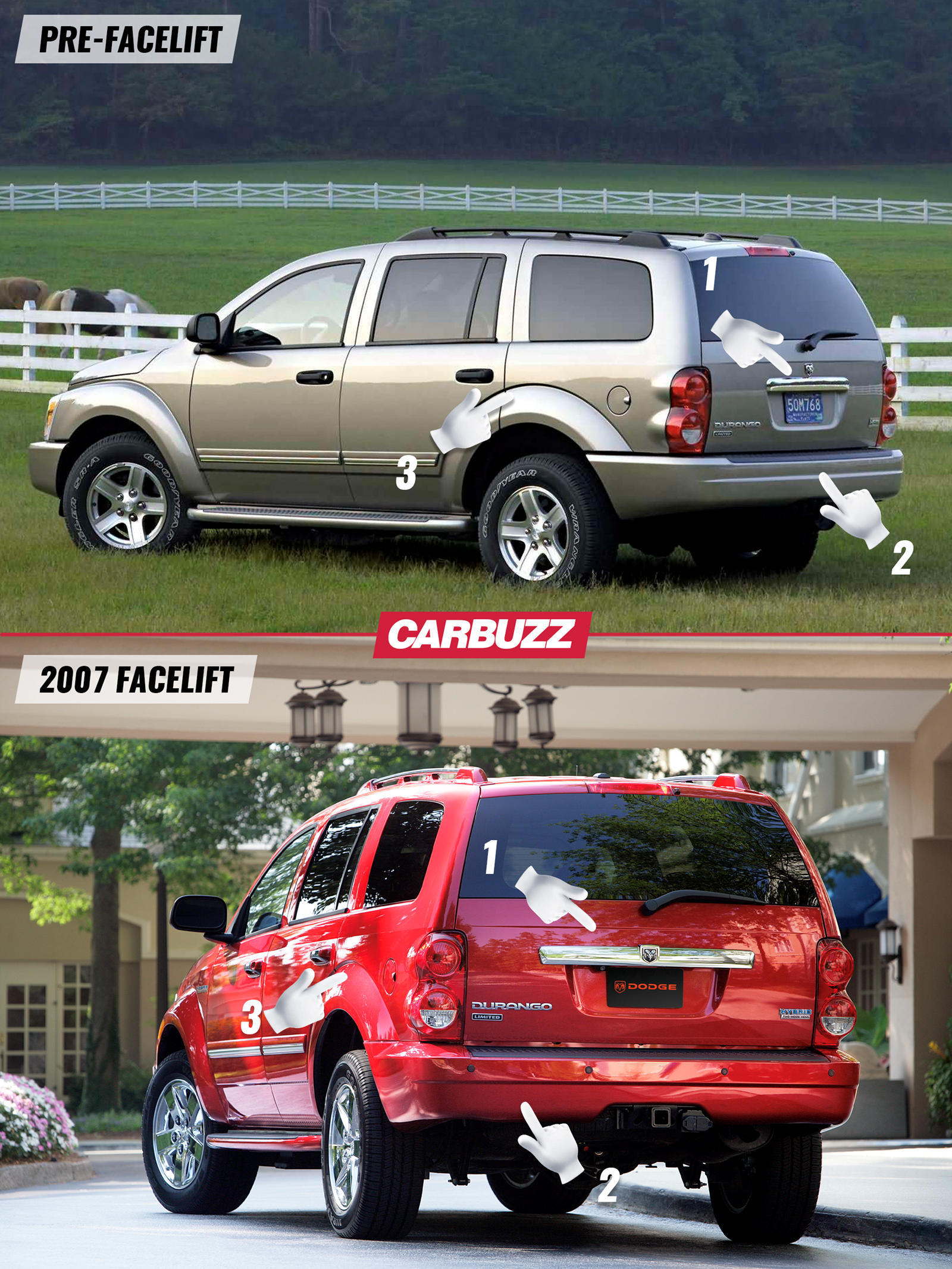 Having gone to town with the front, Dodge has not changed the tail end of the Durango much. A longer chrome garnish above the rear number-plate recess 1 and a restyled bumper 2 designed to flow into the rear wheels' wheel-arch flares are all that differentiate it 3. 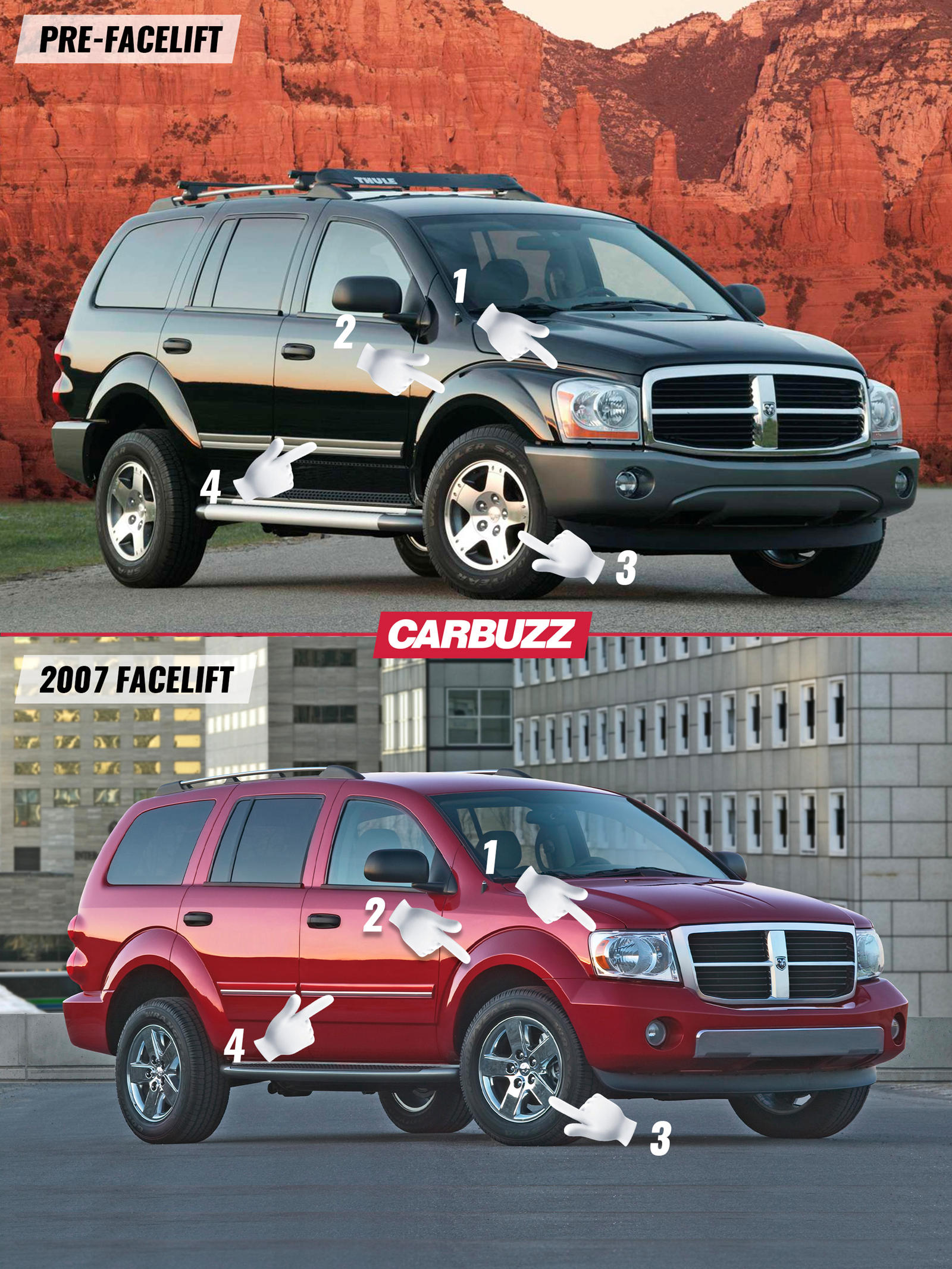 The changes are clearly visible in profile, especially the higher-mounted new headlights and the cleaned-up styling in the front-fender area 1. Both wheel arches are crisper and more defined, all the way down to where they reach the bottom of the doors 2. There are, of course, the obligatory new wheel designs, as well 3. The protective door strips are also higher up and narrower than before 4. 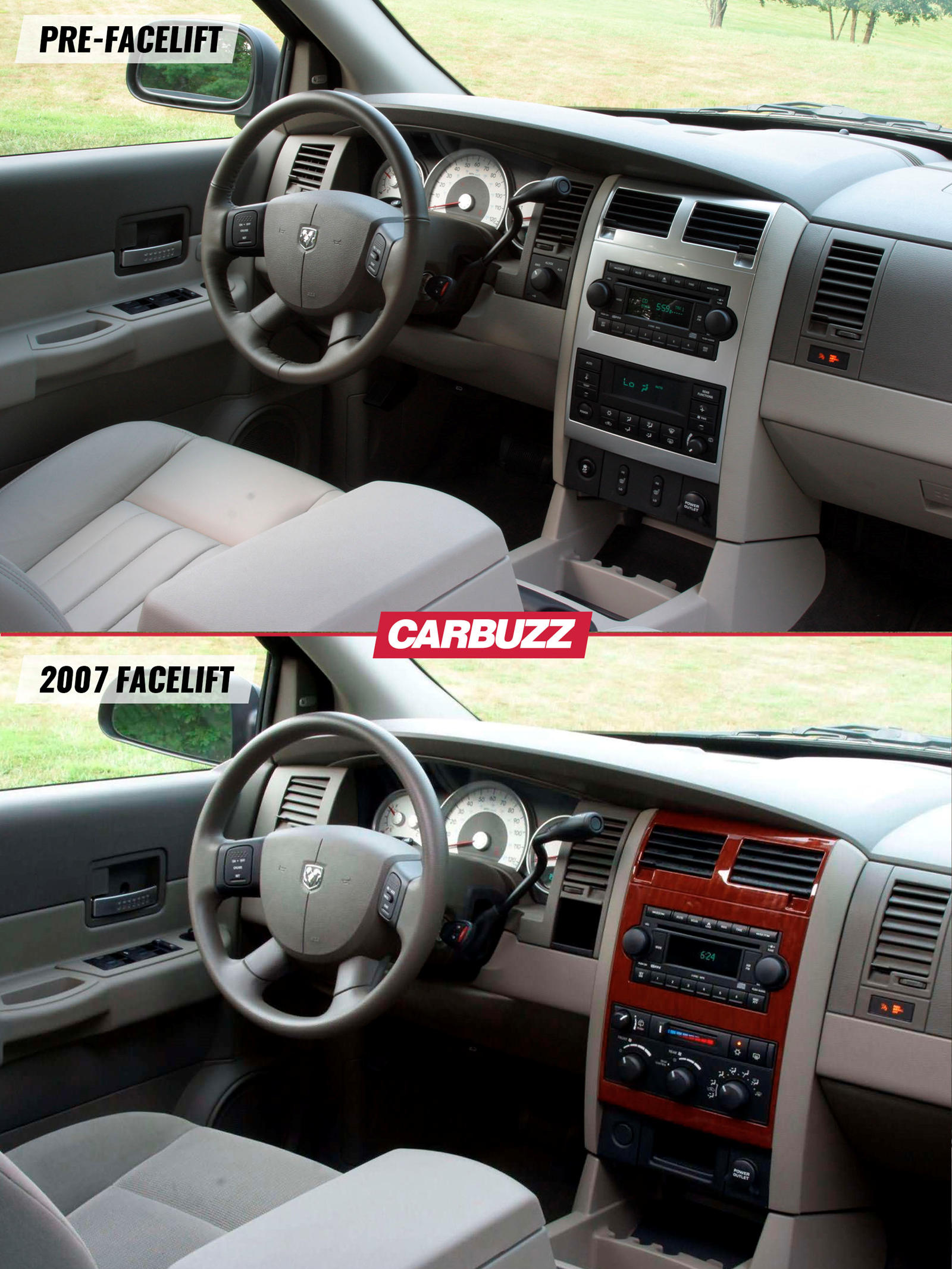 The interior remains very similar and the overall design of the facelift's dash is unchanged, save for different trim and color choices. The center stack's controls are improved, with new radio/infotainment head units on some trims making allowance for increased infotainment screen sizes.

The Dodge Durango 2nd generation makes use of V6 and V8 gas engines. The 3.7-liter V6 and 4.7-liter V8 engines are from the PowerTech/Magnum engine family and virtually identical apart from the number of cylinders. A larger 5.7-liter Hemi V8 engine is also available. The base V6 is only offered on the ST and SXT trims and comes with a four-speed automatic transmission, whereas the V8s get a five-speed automatic. All trims are available with RWD or 4WD, except for the RWD-only ST.

There isn't a single thrifty 2nd gen Dodge Durango and the best of the bunch is the very rare hybrid. From the EPA estimates, it is surprising that the 4.7-liter V8 doesn't offer any fuel saving over the 5.7-liter V8 and is consistently slightly worse. Even owners' real-world consumption figures seem to support this. All trims have the same 27-gallon gas-tank size, which means that the Durango's range on a full tank varies from 378 to 567 miles on the EPA's combined cycle.

Standard features across the board on the 2004 Durango include only automatic headlights, ABS brakes, side-impact door beams, and two airbags. The 2007 facelift has one-touch turn signals, side airbags, and curtain airbags covering all three rows. 2007 Limited and SLT trims have standard rear parking sensors and a tire-pressure monitoring system, as well. Stability control is standard on the 2007 Limited and optional on all other Durangos. All 2008 Durangos receive standard stability control.

Being an old pre-2011 model, the NHTSA never comprehensively crash-tested the 2nd-gen Durango and its testing criteria were also less strict at the time. For what it's worth, the Durango gen 2 scored five stars for the frontal impacts. The 4WD scored four stars in the rollover test and the 2WD, three stars.

There weren't many changes to the Durango's trims over the years. It kicked off with the base ST for the 2004 model year, as well as the SLT and Limited trims. For 2005, the SXT was added between the ST and SLT, for 2006, the ST trim was dropped, and for 2008, the Adventurer was added. 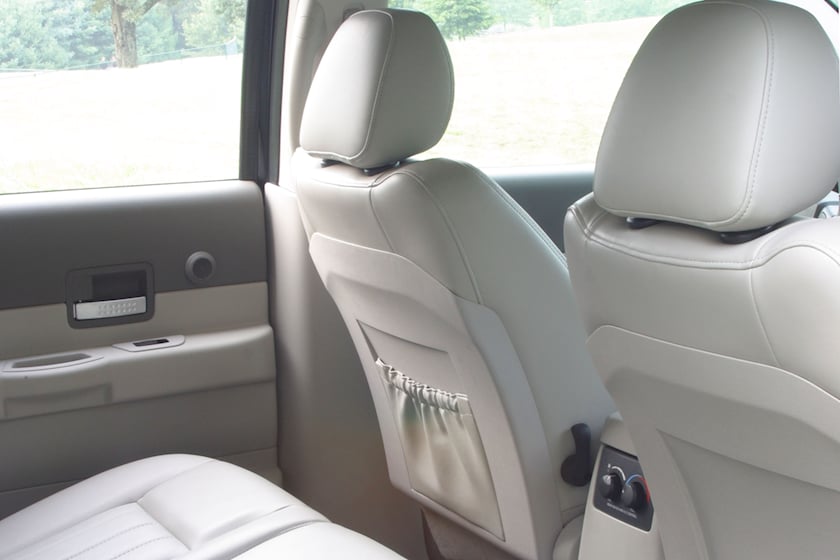 The 2nd-generation Durango is not as versatile as more modern SUVs and the packaging is a compromise. The middle row - the important one when using it as a five-seater - is too cramped in terms of legroom, while the least-used third row is actually quite roomy and offers more space than a Chevrolet Tahoe of the same era. Still, besides in the very biggest SUVs, the third row is rarely where you want to spend time, so that leaves the midsize Durango with an odd space allocation that could have leaned more towards the second row's comfort rather than leaving everyone wanting. With the third row folded, there is at least plenty of luggage space, with a generous 68 cubic feet available - and more than 100 cubic feet when all the seats are down.

Interior quality is another sticking point and neither the design nor the materials scream class or quality. The leather seating surfaces of the Limited and the various entertainment and technology options do modernize the experience somewhat, but it could never be described as upmarket. And the living space will never be confused with that of a European rival. Still, at its price, the Durango can be considered perfectly adequate.

Preventative maintenance is always recommended, but it is even more important on the Durango. Oil-change intervals are set at 6,000 miles and we would not exceed that, given the engines' propensity for developing problems with their cylinder heads and with oil sludge. These lube services shouldn't cost more than $200 at an independent dealer. Spark plugs don't last long and must be replaced every 30,000 miles, along with the air filter; these services can cost $550-$650 on the 5.7-liter V8 and the 2008+ 4.7L, because these engines have 16 spark plugs. It is prudent to replace the transmission oil every 60,000 miles to get a long and trouble-free service life out of your transmission, even though the manufacturer prescribes 120,000-mile intervals. Expect to pay $220 to $260 for a transmission oil change. At the same time, we would flush the cooling system and replace the coolant, especially on the 4.7-liter engine, which is prone to cooling troubles as it ages.

Some of the minor 2004-2009 Dodge Durango problems include a tendency for failure of the cam-position sensor on the 5.7-liter V8 engine, causing poor running and the Check Engine light, as well as stalling and a refusal to start. The sensor only costs around $100. There was a flurry of flat batteries on 2004 Durangos and all owners weren't equally fortunate in tracing the problems. Earlier 2004 and 2005 Durangos also seemed to have an odd glitch with 4WD being selected uncommanded. Rust problems pop up now and again, predictably most often in the rust-belt states. Just make sure you inspect a used Durango thoroughly for rust and corrosion of the underbody and the tailgate. Despite a fairly long list of issues, 2004-2009 Dodge Durango fuel-pump, headlight, sunroof, power-liftgate, radio, catalytic-converter, fuel-gauge, power-steering, and transfer-case problems seem to be few and far between in general.

As you can see, the 2004 and 2005 Durangos should be avoided. They suffer the most engine failures, the most recalls, and the most problems in general. We'd also give the weak 3.7-liter V6 with its old-fashioned four-speed automatic transmission a miss, especially if you want to get up to speed in a hurry or contemplate hauling or towing anything at all. The 4.7-liter V8 might seem like a good buy, especially the later, more powerful version, but it is still of the Magnum/PowerTech family and, therefore, prone to all the same problems that this engine family suffers from - which can be numerous. Plus, it's no more economical than the 5.7L, calling its existence into question.

There is no question that the 2008 and 2009 model years are ones to go for. They have an acceptable level of safety features across the board, such as stability control and curtain airbags, and these are also the years with the fewest problems by far. The facelift is also better equipped and looks better. The 5.7-liter V8 is a no-brainer, too. These cars are now old enough to be affordable and a 2008 or 2009 Durango Limited 5.7-liter V8 will give you most of the advantages of modern SUVs, an acceptable level of safety, and strong performance, all in one package.

It's not all moonshine and roses if you are shopping for a used 2nd gen Dodge Durango and you would do well to avoid the earlier models at all costs. In its last form, it is a decent SUV that is easy to drive and live iwth. Properly looked after, it can last a long time and offer you V8 SUV motoring at a fraction of the cost of a new SUV in the same class. Be sure to avoid all the pitfalls and problems areas we outlined so you don't buy yourself a money pit, because this can easily happen.