The F-150 received a fairly substantial refresh for the 2018 model year with new front and rear lights, a new grille design, and new wheel options. Several design elements were taken from the Super Duty and additional new appearance packages became available for the XL, XLT, and Lariat. 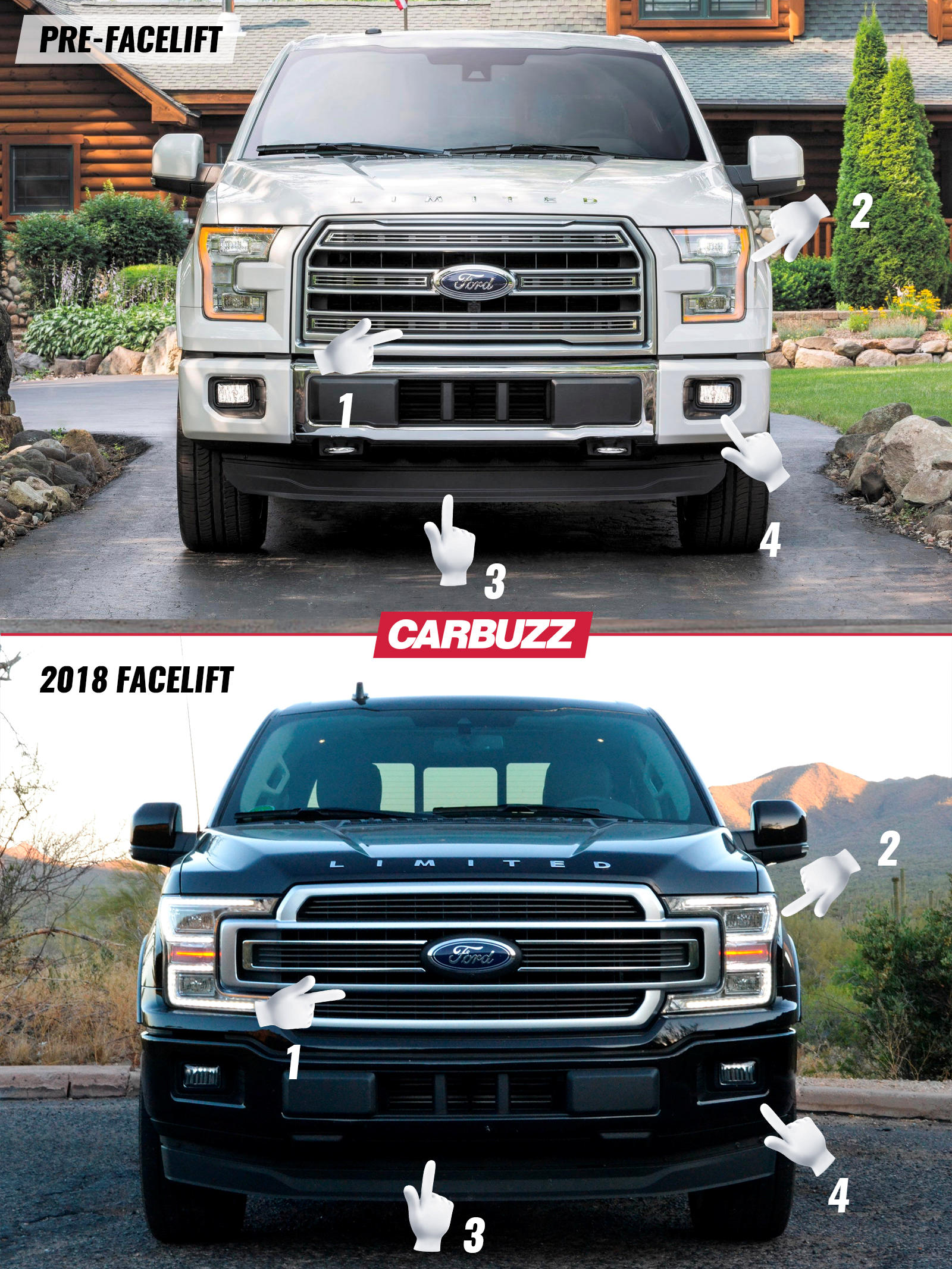 A new octagonal grille replaces the old trapezoidal one with a larger Ford logo and two wide horizontal bars 1 extending right into the newly updated headlights 2, replacing the previous three-bar grille. A restyled bumper that dips down in the middle to accommodate the new grille rounds off the frontal changes 3 and it has larger fog-light slots too 4. 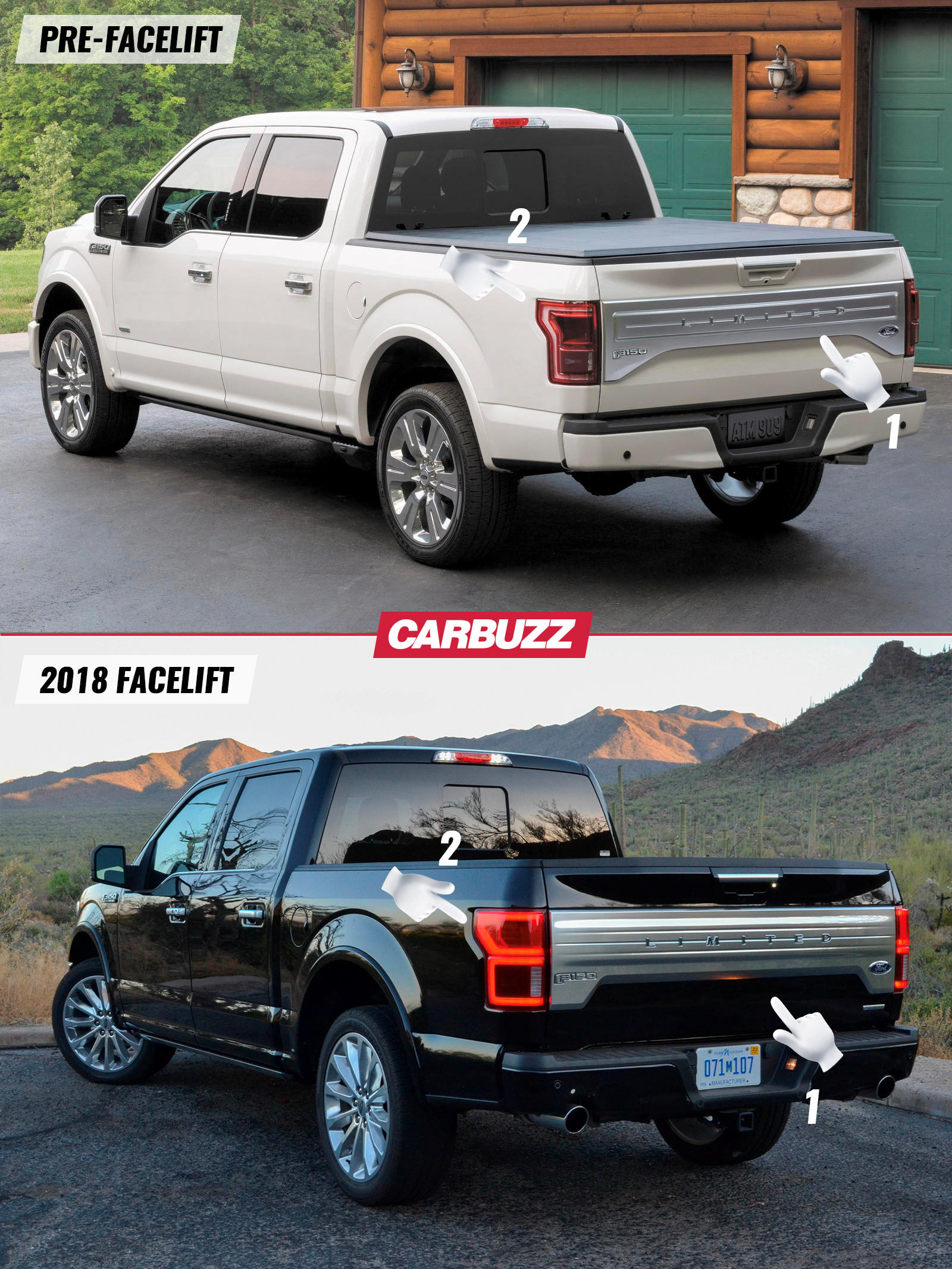 The tailgate is not only visually changed 1; it also adds functionality and is available with a pull-out step. In line with 2018 federal regulations, part of the rear-end changes includes a standard backup camera. The tailgate receives a new embossed "F-150" emblem stamped into the metal and a revised tailgate pressing. The taillights are also redesigned to be edgier 2. 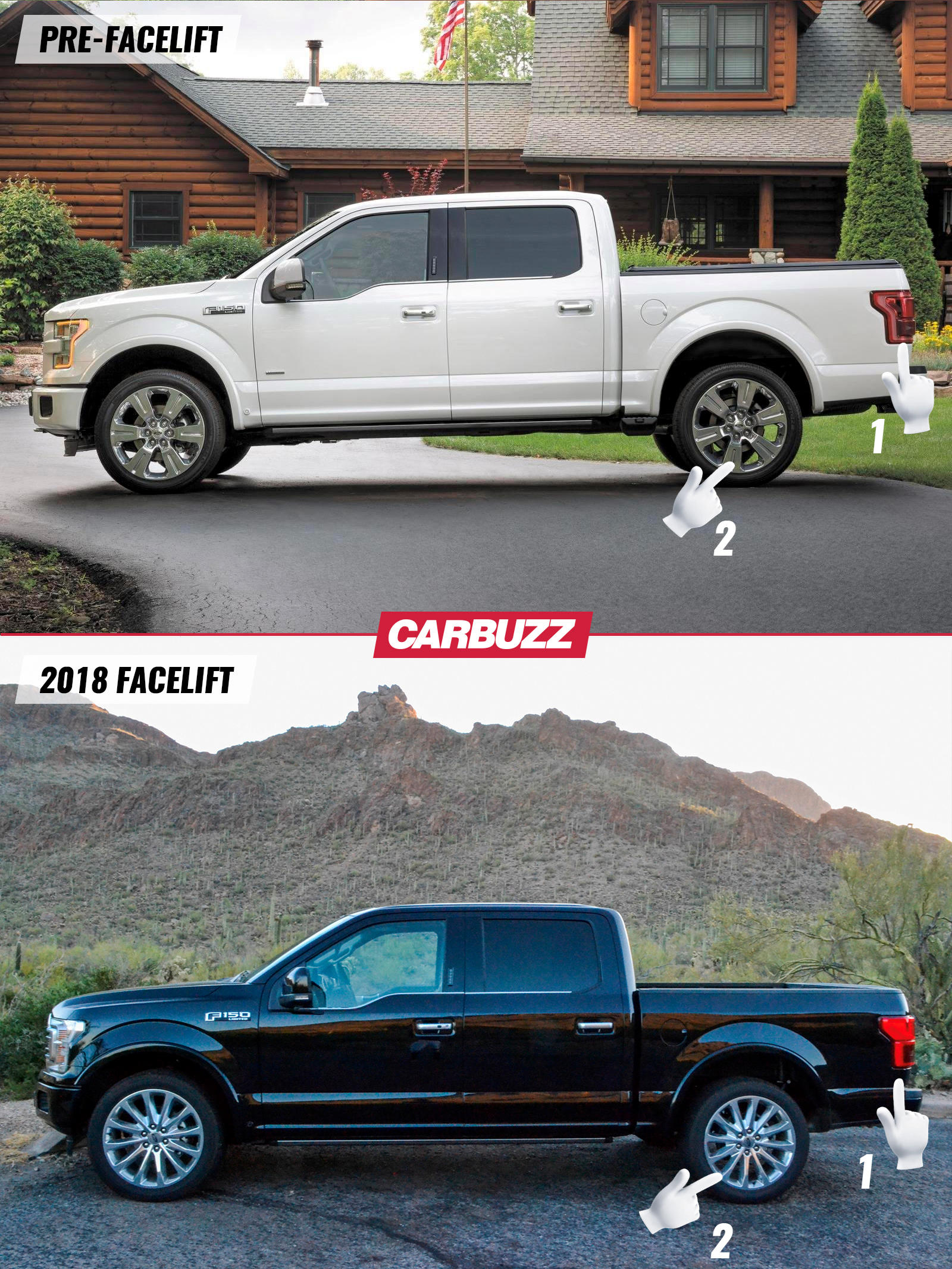 The side view sees the fewest changes, with the most obvious ones being the slightly different wrap-around taillights 1 and the new available wheel designs 2. 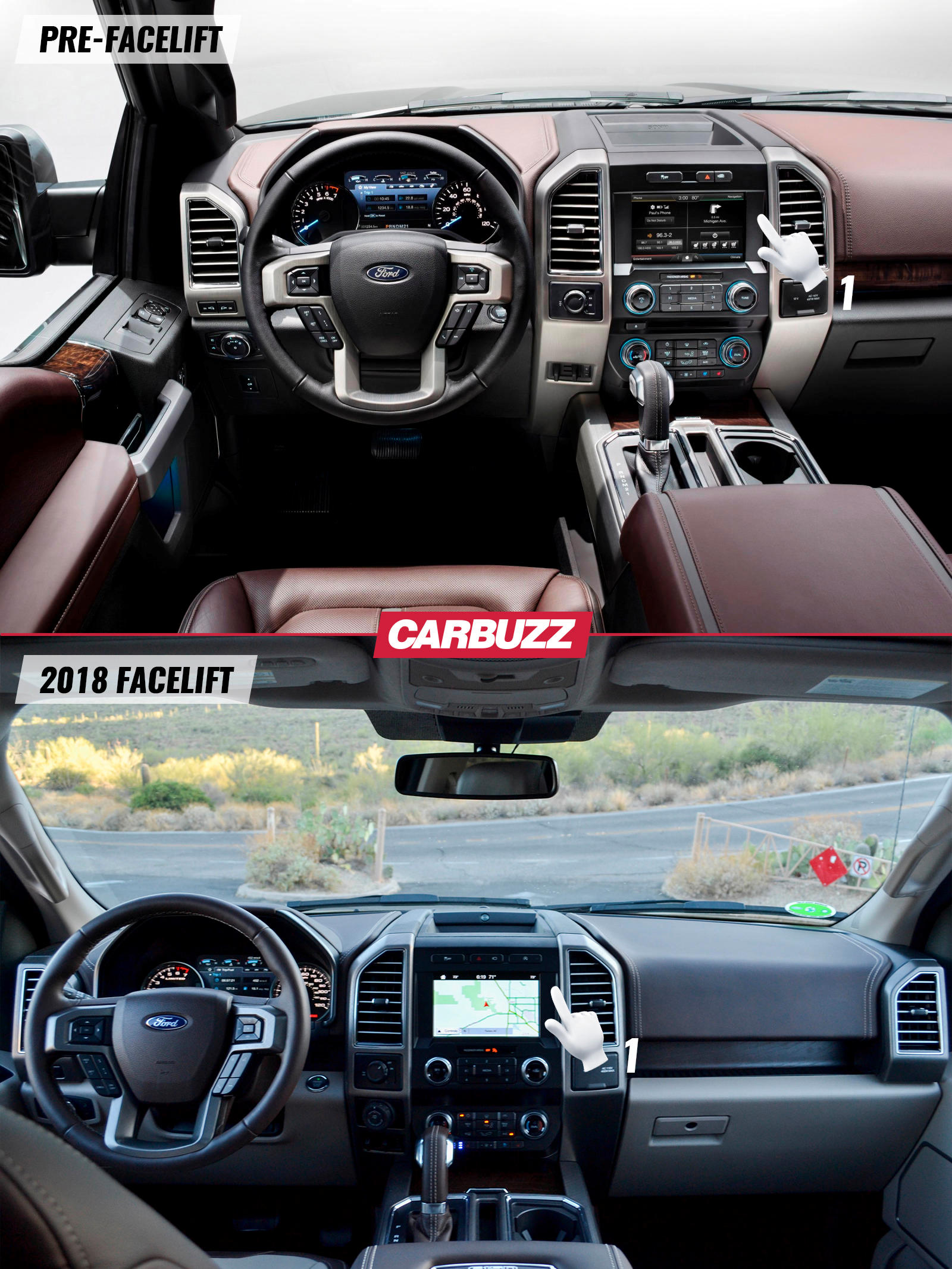 The interior, which was criticized for a lack of quality finishes, only receives minor updates, most notably the adoption of the Sync 3 infotainment software that provides additional features such as remote access, Wi-Fi connectivity, and other vehicle-related information on certain trims. Some trims do get upgraded materials, new color schemes, and additional options. SiriusXM became standard on the XLT trim and the top-end audio system option changed from the previously used Sony setup to a Bang & Olufsen system 1.

Additional safety features are also fitted, including available adaptive cruise control with pedestrian detection and forward-collision warning, as well as a backup camera.

Initially, four engines were available from the 2015 model year and they were all gas engines - a naturally aspirated 3.5-liter Cyclone V6, a turbocharged 2.7-liter Nano EcoBoost V6, a 3.5-liter EcoBoost V6, and a naturally aspirated 5.0-liter Coyote V8. Outputs vary from 282 to 385 hp. Allied to the lowest curb weight in its class, even the base F-150 with the 282-hp engine provides sprightly performance. All engines are mated to a six-speed 6R80 automatic transmission. The most frugal engine in the lineup is the 2.7-liter EcoBoost V6 with EPA-estimated figures of 19/26/22 mpg on the city/highway/combined cycles.

For the 2018 model year, the engines and transmissions were refreshed with the debut of the ten-speed automatic transmission, which was eventually rolled out across the range. All engines received a power bump, the base engine now displacing 3.3 liters and developing 290 hp, and the high-output 3.5-liter EcoBoost putting out 450 hp. A new PowerStroke turbocharged 3.0-liter V6 diesel engine was added with 250 hp and 440 lb-ft of torque.

As vehicles get older, the EPA publishes real-world fuel-economy statistics in order to compare with claimed and EPA-estimated results. More often than not, turbocharged engines perform relatively worse in the real world, as they consume as much or more fuel as larger naturally aspirated engines under high loads. This is true of the 3.5-liter EcoBoost V6 in the F-150, which seems to hover between 16.2 and 16.5 mpg overall in actual driving, compared to the combined EPA figures of 19-20 mpg. Interestingly, the 2.7-liter engine does a lot better and actually matches the EPA's 20-22 mpg on the road. Somewhat predictably, the 5.0-liter gas V8 beats its estimates handsomely - by up to 5 mpg, in fact. Its real-world figure sits between 19 and 23 mpg compared to the claimed 17-18 mpg.

Safety takes a step up with the 2015 Ford F-150, which received a full five-star crash rating at the NHTSA upon launch. The 2016 model earned a Top Safety Pick award at the IIHS. Standard safety features on the base XL trim for the 2015 model year include ABS, stability control, tire-pressure monitoring, and six airbags. A backup camera only became standard for all F-150s from the 2018 model year but from launch, it is fitted to the Lariat trim and up. The 2018 facelift also gets pre-collision assist with pedestrian detection and optional adaptive cruise control. So even the base XL had a reasonable safety specification for a truck.

There were initially five trims of the Ford F-150: XL, XLT, Lariat, King Ranch, and Platinum, joined by the Limited from the 2016 model year and the Raptor from the 2017 model year. 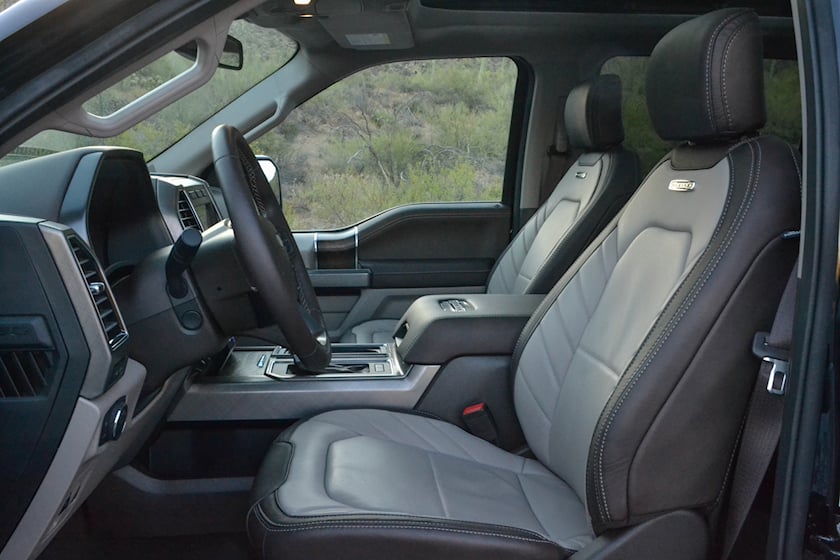 The F-150 is available in three bed lengths. The 5.5-foot bed has a volume of 52.8 cubic feet, the 6.5-foot bed has 62.3 cubic feet, and the eight-foot bed has 77.4 cubic feet. Not all beds can be mated to all body styles. The Regular Cab accommodates three people on a bench, but SuperCab and SuperCrew models add an extended cabin with rear doors and a second three-seater row of seating. These two body styles can also be optioned with a spacious front center console, which deletes the front center seat. Interior space is generous, even in the rear, with enough space for all occupants to stretch out in, even when the front seats are moved well back. Ingress and egress are eased by grab handles and, from the Lariat level and up, also by running boards.

The five core trims that have always been available are XL, XLT, Lariat, King Ranch, and Platinum. The Limited trim arrived for the 2016 model year and the Raptor reappears after a hiatus of a few years as a 2017 model. The base XL is little more than a work truck with a minimum of luxury and safety features, a tiny infotainment screen, and no smartphone integration. It becomes a lot more liveable from the XLT up, with a proper infotainment system, power accessories, and the like. It provides the bare necessities of truck life and can be optioned up to a higher level, which makes this a sensible trim and the reason why the off-road-focused Raptor is based on the no-nonsense XLT. But for lots of family-friendly features, you have to look at the Lariat. It's all the F-150 you'll ever need, with an upmarket ambience thanks to leather upholstery, heated and ventilated front seats and more safety features.

Since the F-150 is the top-selling vehicle in America and Ford has a massive local footprint, you'd be pleased to learn that there are around 3,000 Ford and Lincoln dealerships spread across the country. In fact, around one in six of all dealership outlets in the US falls under the Blue Oval's umbrella. So you are sure to find one near you.

The F-150 should be serviced every 10,000 miles, which requires the engine oil and filter to be replaced every time. Only the manufacturer's recommended synthetic oil should be used. If you use your truck in harsh conditions, for towing, on dirt roads, or in sub-zero temperatures, it is advisable to replace your oil more frequently. At the standard services, the dealership will also thoroughly inspect the braking, exhaust, and cooling system. For the first 100,000 miles, the standard service is repeated, but at this mileage, the dealership will also replace the spark plugs, accessory drive belt, and coolant. At 150,000 miles, Ford recommends that you replace the rear axle's oil and the automatic transmission's fluid, but for the latter, prudent owners often prefer to halve this distance for peace of mind. The dealership checks the transmission fluid at every service and should advise you if it needs to be replaced before the stipulated interval. Enquire with your dealer about opting for high-miler oil when your truck has covered a great distance and check your oil level frequently, as old engines tend to consume more oil. Keep in mind that new engines also often consume oil, so don't assume that you only have to check your oil at services; check it at least weekly.

The average annual cost of maintaining a Ford F-150 hovers around the $770 mark. It is a little more expensive at a Ford dealership and a little cheaper at an independent one. Thanks to the sheer volume of F-150s on the road, maintenance costs are reasonable and the long-lasting rear brake shoes on a 2019 model 3.3 V6 would typically cost you around $330-$450 to replace at a Ford dealership, as an example. An independent dealership can often do this type of work for less than $300. Edmunds' cost-to-own breakdown of the F-150 shows a spike in years four and five, when the expected maintenance costs will likely exceed $2,000 per year for a gas model, dropping again until major items become due again, such as a transmission service. Repair costs tend to slowly increase every year as a vehicle ages and more parts wear out and fail.

There is no standard tire size for the F-150, because there are so many trims with wheel sizes varying from 17 to 22 inches. Typically, 2WD models use all-season tires and 4WD ones all-terrain tires. Models such as the Raptor use specialist off-road tires that could cost you well over $1,300 for a set of four, but the typical mid-range trim should not exceed $1,000 on average for a set.

The base XL with its basic infotainment system, manual windows, and dearth of features is best avoided for any type of family duty. It's a no-nonsense work truck. As is usually the case, the earlier the model, the more numerous the problems. Although most of these should have been fixed, you'll have to be on the lookout for rough transmissions and engine noises. Walk away if an early model's engine taps or ticks, because either cam-chain or cam-phaser issues will set you back a fair bit. Early transmission problems blighted the F-150's image somewhat and if you're in it for the long haul, the pre-facelift models' EcoBoost engines that require somewhat costly periodic valve cleaning should be avoided.

The XLT is the minimum entry point to have a reasonably comfortable driving experience. The Lariat is the ideal family vehicle if the budget stretches that far, but the XLT with a few options will do nearly the same job. The best V8 to buy is the older 2015-2017 version before the facelift because it doesn't have the potential oil-consumption problems of the later engine. Lacking direct injectors, it should idle quietly, with no clicks or taps that may spell expensive cam-drive repairs. The best EcoBoost engines are those belonging to the 2018 facelift, as the teething troubles have been sorted out and the manifold injectors give peace of mind because they eliminate long-term carbon build-up on the intake valves. Just be sure that all the recall work has been done and the transmission software is the latest version. A facelift 2018 2.7-liter EcoBoost probably provides the best combination of power, economy, and reliability.

The 13th-generation Ford F-150 is generally durable and dependable and should give many years of good service if it is properly maintained. Keeping in mind the caveats mentioned above, you will find one that suits your needs at a reasonable price, but it might not be a bargain, because the F-150 retains its value well. However, this is good news for when it becomes your turn to sell it. The earliest models are best avoided unless the relevant repairs have been made. A well-looked-after F-150 with a full service history should give years of trouble-free service.