There were notable upgrades along the way. In 2013, Ford added a Platinum trim for ranch owners and upgraded the brakes. In 2015, it improved the diesel powertrain with more power and better fuel economy. 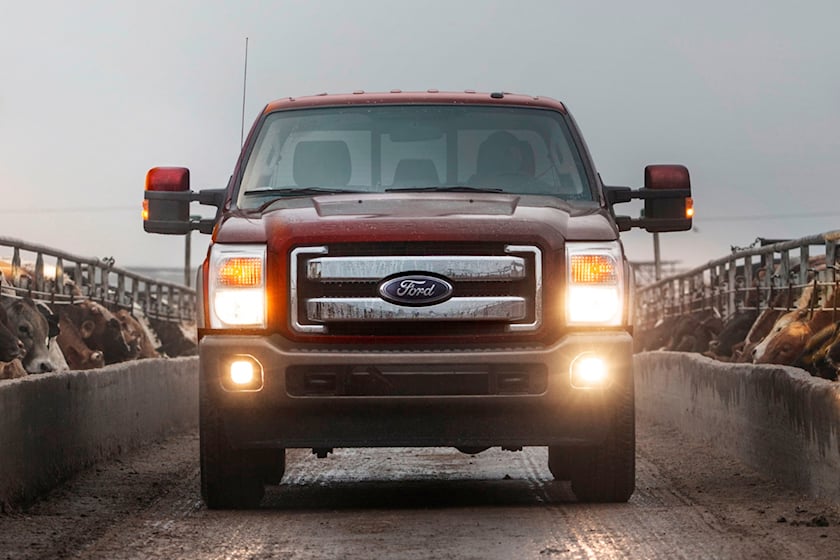 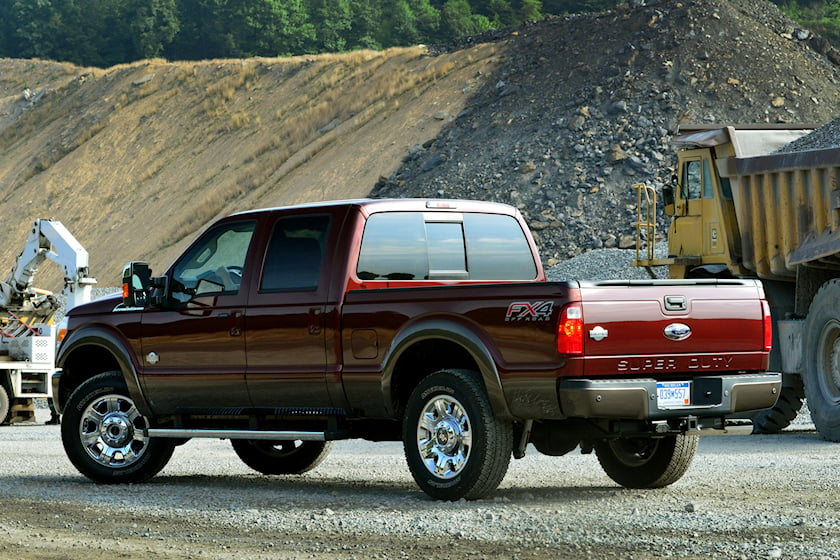 There are two engines available, both of them brutes. Each Ford F-250 third-generation engine is mated to a six-speed automatic transmission and RWD as standard. A part-time 4WD system was an optional extra on all models. The gas engine is a traditional large capacity 6.2-liter V8, while the diesel option is a turbocharged 6.7-liter V8. The diesel made 390 hp and 735 lb-ft of torque when it was new, but Ford introduced a software upgrade in 2015 that boosted the outputs to 400 hp and 800 lb-ft. The good news is that this upgrade is still available for free at Ford dealerships.

The EPA doesn't provide estimated consumption figures for this class of vehicle, but various online resources have databases on user-submitted real-world figures. As you'd expect, the F-250 isn't ashamed to decimate a tank of gas. The diesel's combined consumption is significantly better. The gas models' figures vary from 11 to 14 mpg on average, with the bulk of the figures concentrated around the 12-mpg mark. Almost no users could do better than 16 mpg at best and the worst figures hovered around 6-7 mpg. The diesel varies between 13 and 17 mpg, with the biggest concentration of submissions claiming 15 mpg - 3 mpg better than the gas engine. Almost no users could get any better than 19 mpg in light running and the worst figures were around 10 mpg.

The first model years are a bit too old to boast any advanced safety features, but all 2011 models come with the obligatory ABS brakes, traction and stability control, trailer-sway assist, hill assist, a post-crash alert system, and six airbags. XLT and higher trims have an integrated trailer-brake controller, while the Lariat and higher have rear parking sensors and an auto-dimming rear-view mirror. Even a rearview camera was an optional extra on XLT and Lariat models, with only the King Ranch having it as standard equipment. 2012 models come with upgraded brakes, and that's about it. It's worth remembering that high-end models all have rear park assist, and you might want to keep an eye out for an F-250 with a rearview camera.

The F-250 has a decent safety rating, scoring four out of five stars overall.

The Ford F-250 third generation is available in five trims, with the top-spec Platinum only available from 2013. The five trims are XL, XLT, Lariat, King Ranch, and Platinum. Before you get to the trim, you first need to select the body style. The F-250 is available in Regular Cab, SuperCab, and CrewCab. The Regular Cab comes with an eight-foot bed, while the SuperCab and CrewCab are available with a 6.8 or eight-foot bed. If you want a King Ranch or a Platinum, it's going to have to be a CrewCab. The most luxurious workhorse is the Lariat in the SuperCab body style. Trims generally follow on each other, with each successive trim sporting all the equipment of the preceding one, unless otherwise noted. 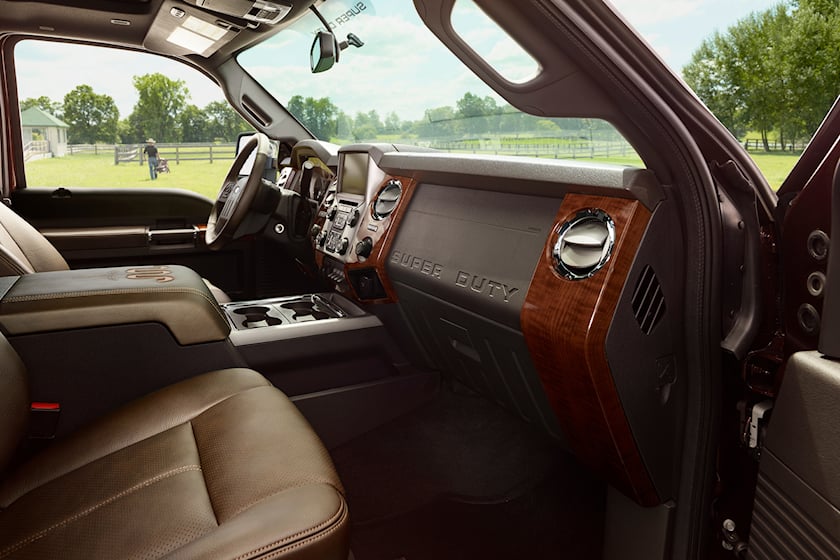 The F-250 is a massive truck, no matter what body style you select. It obviously limits the seating, but Ford gets around this by offering a three-seat bench in the front row. Combined with the three-row bench in the second row, you get seating for six. From the Lariat trim, two front bucket seats are standard, taking the total seat count down to five. The extended or SuperCab has rear-hinged small doors to make access to the rear bench easier, but it's still not as practical as the CrewCab.

Interior quality is not the best, especially on the basic Regular Cab. The vinyl seats don't age well, but the cloth and leather on higher-trim models do add an aura of luxury. The buttons also feel cheap, but at least the layout is easy to understand. The dial for the part-time four-wheel-drive system is within easy reach, as is the traction control button.

Being a truck, it is extremely practical. Even CrewCab models can be had with the larger eight-foot bed with a maximum load capacity in excess of 4,000 lbs.

There's no shortage of Ford dealers or third-party workshops that will look after the F-250. Like most vehicles, you can expect to pay $150 for a basic oil change on the gas model. It will be at least double that for the diesel because it has a huge 13.1-quart oil capacity and an expensive filter to keep the huge twin-turbocharged 32-valve unit properly lubricated and protected. A lubrication service every 7,500 miles costs around $160 at an independent shop and around $200 at a Ford dealership (around $210 and $280, respectively, for the diesel). Replace the oil every 5,000 miles if the truck does a lot of towing or is operated in freezing environments.

There are surprisingly few 2011-2016 Ford F-250 Super Duty recalls. All model years were recalled in 2020 for a steering system that may lock up. This recall was limited to just 102 units, however. Early models were also installed with the incorrect body control module, which was a fire risk.

There was an early transmission recall. The driver could shift out of park without pressing the brake. The 2013 and 2104 model years are recall-free, while the 2015 MY was recalled for an incorrect rearview camera display and a transmission calibration error. The latter affected less than 4,000 cars.

During its final year on sale, the 2016 MY was recalled for possible damage to the tire inside wall. This also affected less than 2,300 units.

There are reported brake problems on earlier models, but not anything dangerous. The brakes just tend to wear out quickly or the rotors warp and start to shudder, which are not uncommon problems on big trucks like this. The occasional Boss gas engine has been known to eject the odd spark plug, damaging the thread in the process and requiring a cylinder head replacement to the tune of $400 or more. There are 16 spark plugs; treat them gingerly. Delaminating fuel tanks can clog the fuel system and replacing the tank can cost over $2,000, in addition to repairs to the rest of the system. Thankfully, it's not too common.

While there are known trouble spots, the following systems are generally very reliable:

The fact that Ford upgraded the brakes for the 2013 model year is sort of proof that more powerful brakes were justified. For that reason, we'd avoid the 2011 and 2012 models.

As for the Scorpion diesel engine, we'd stay well away from all 2011 to 2014 models. The initial teething issues can become extremely expensive to fix, and it's a much better idea to avoid them completely. 2011 was by far the worst year in terms of the overall number of problems owners encountered.

It depends entirely on what you want to do. If you're here for towing, you can't go wrong with the V8 diesel. The engine is epic and it provides giant lumps of torque. Just stay away from the earlier models, but a post-2014 model should be reliable. The 2015 and 2016 diesels are also significantly more powerful - by 40 hp and 60 lb-ft. For everything else, the gas V8 should be fine. If you want a work truck, get a Lariat in the body style that suits your needs with a V8 diesel engine. If you want a mix between ruggedness and luxury, find al Platinum with either engine.

The 3rd-gen F-250 Super Duty is a decent truck with a strong reputation. It has some minor problems, mostly related to its inherent flaws as a truck. It can tow with ease, the V8 diesel is an absolute powerhouse, and the ride is refined. The F-250 works as both a work truck and a lifestyle vehicle, or a little bit of both.