The Honda Pilot 2nd generation has two internal codes: YF3 and YF4. These are simply pre and post-facelift classifications. Honda chose 2012 to introduce the facelifted model. We prefer the 2nd generation's chunky styling over the mundane 3rd-gen Pilot. 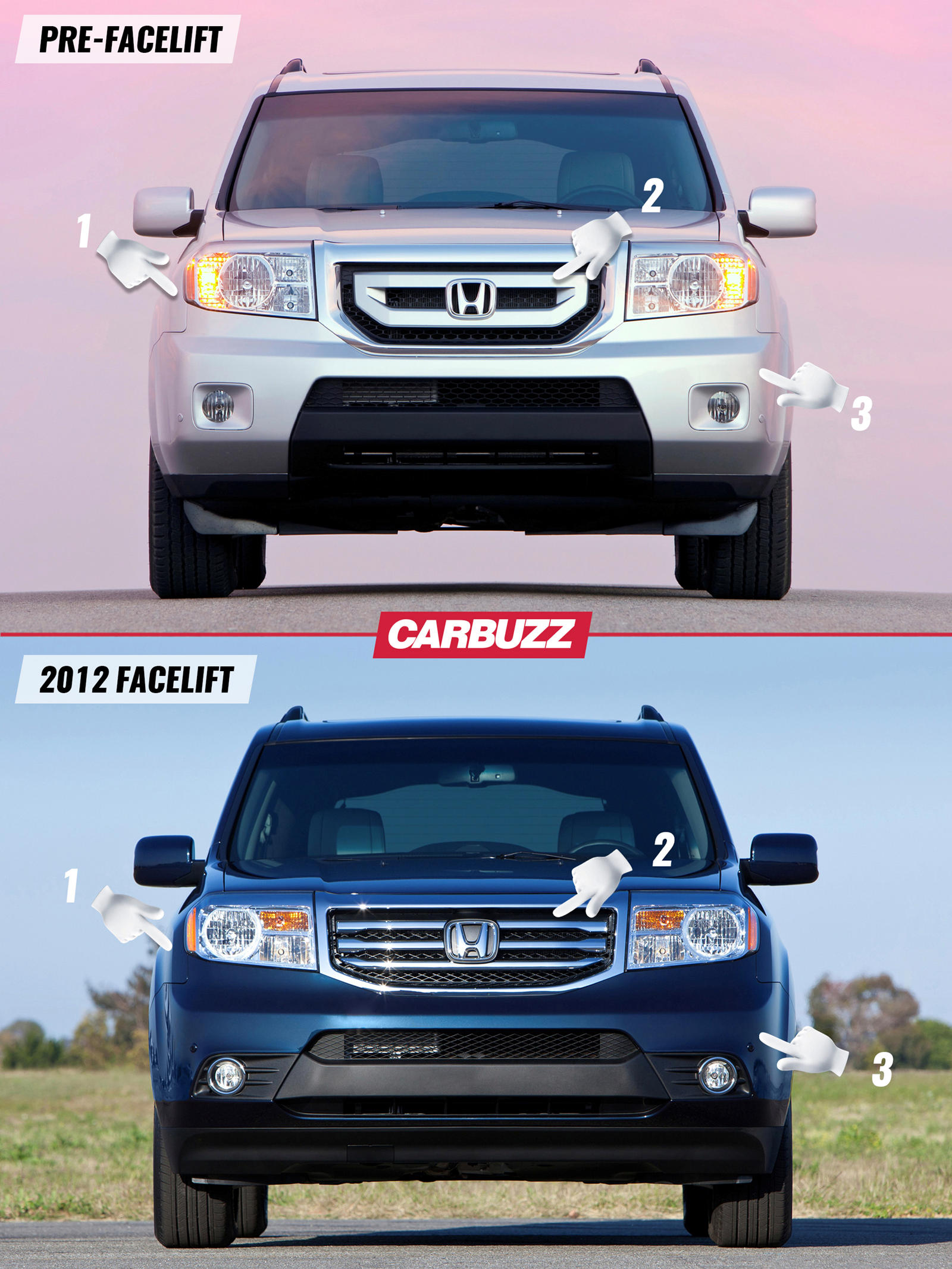 At the front the 2012-2015 Pilot has redesigned headlights 1 that retain the same overall shape as the old ones. However, the indicator that used to sit in the outside of the cluster up against the side marker light moves to the upper inside position, next to the grille, allowing the main round headlight reflector to move out to the edge. The oddly squared-off grille-within-a-grille 2 of the old car is substantially revised, with a far thinner chrome outer grille frame and three chrome slats inside. The darkly contrasting lower fascia that contains the lower air intake now runs the width of the vehicle and the round fog lights are now at its far ends and no longer in squared-off housings in the previous body-color bumper sections that used to reach down into the lower bumper on either side 3. 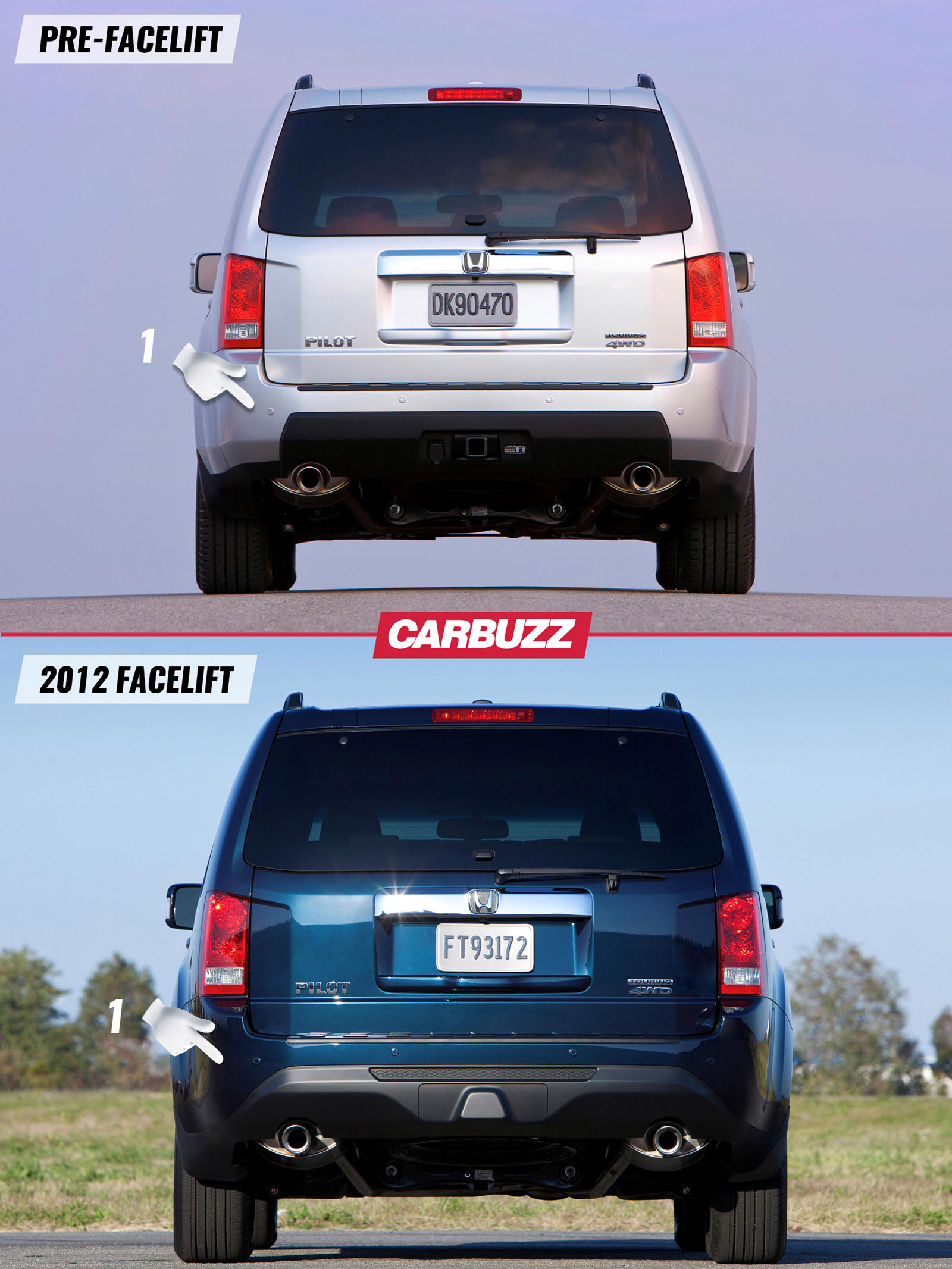 The black contrasting lower rear bumper follows the example of the front by extending further to the sides and tapering down more smoothly than the sharp-edged previous one 1 . Nothing else changes. 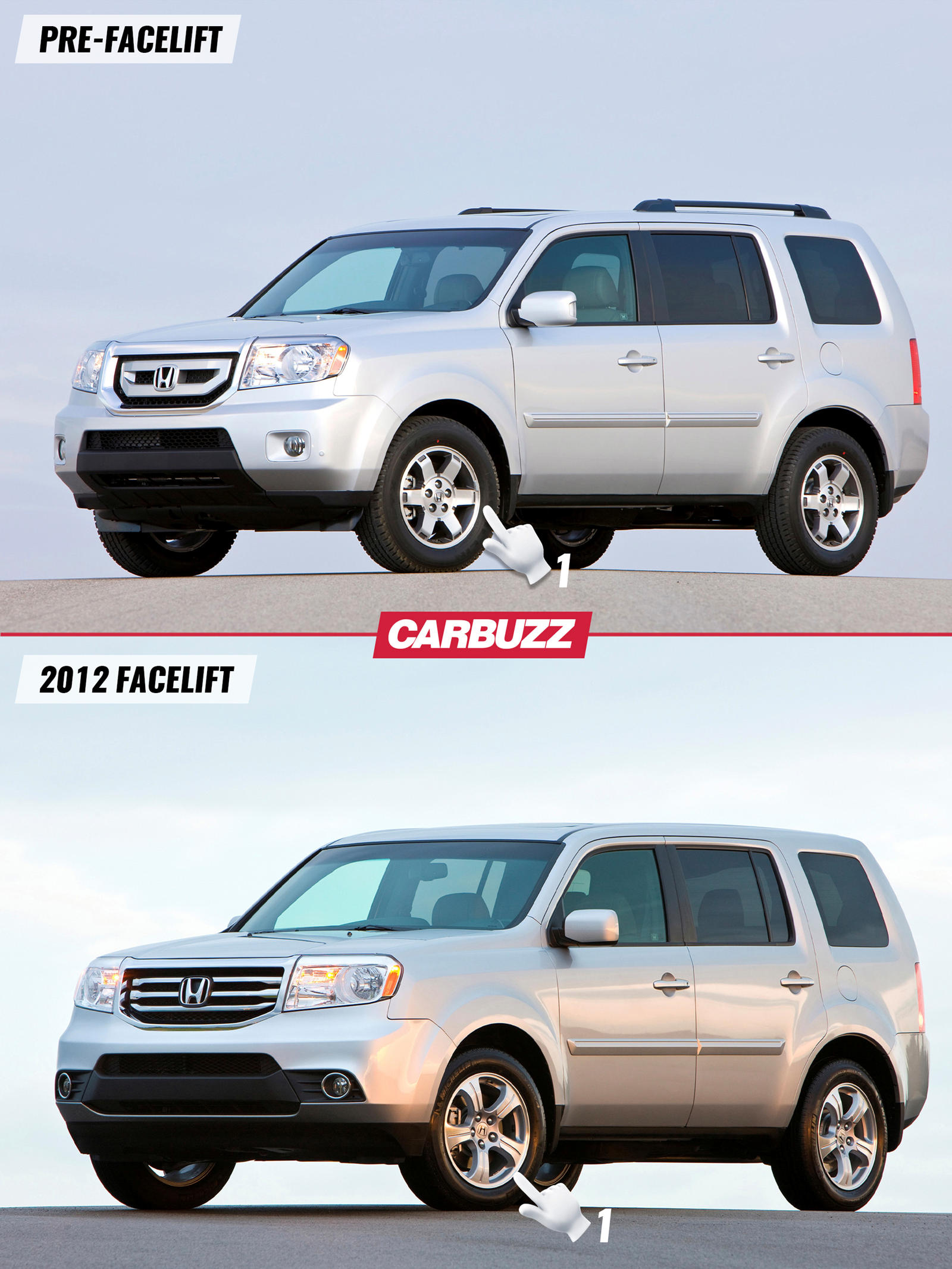 Besides the hardly noticeable changes to the front bumper, the only changes in profile are the new alloy wheels 1 on offer. 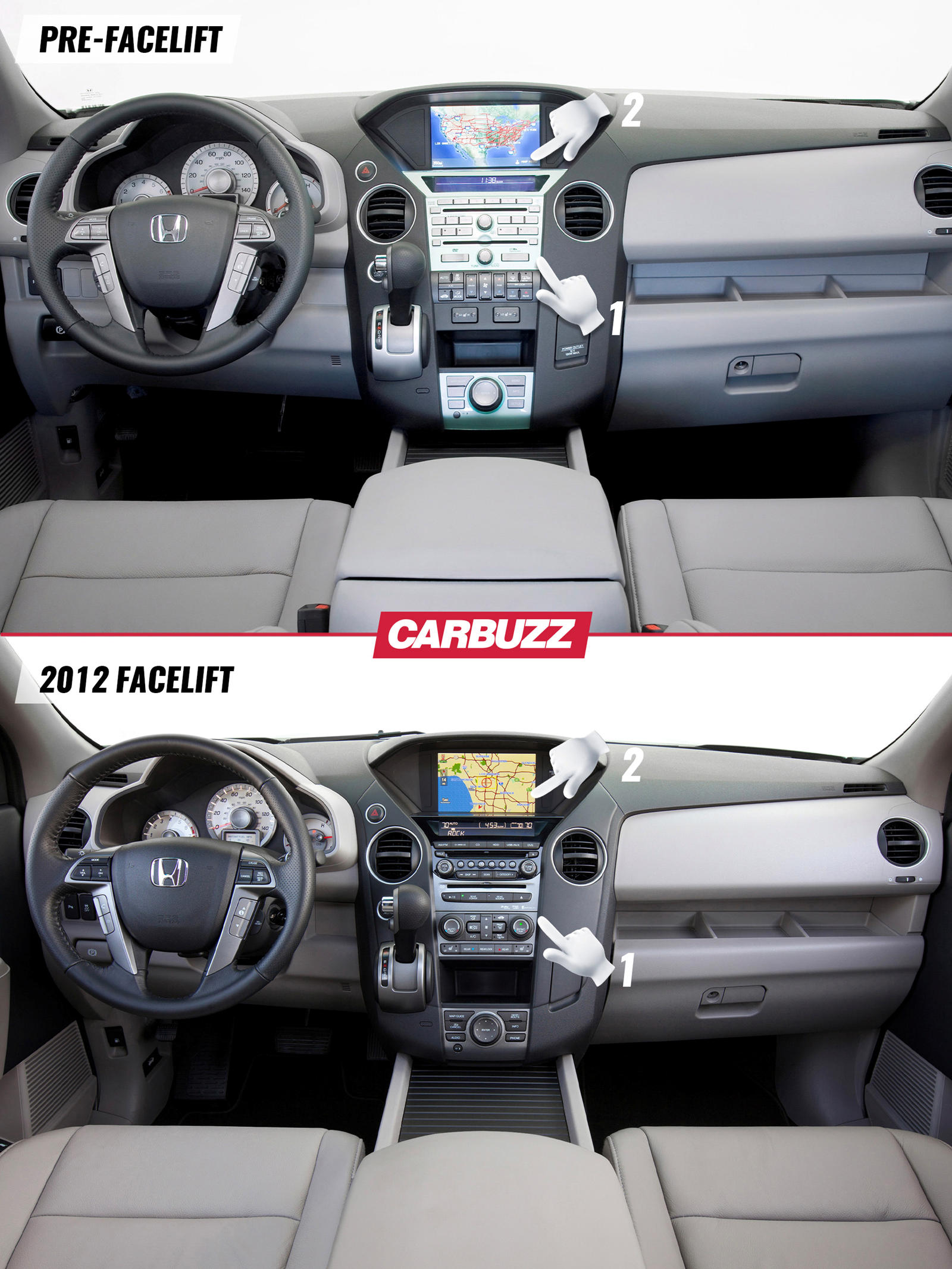 Pilot owners are not fans of the pre-facelift model's center console button fest. So Honda added even more buttons. In all honesty, the facelifted model's center console is a bit easier to work with, but it still feels like a lot. At least Honda replaced the most-used climate-control buttons with dials, which work a lot better. The facelifted model also has better sound insulation and higher-quality materials. Honda has also upgraded the navigation system.

The Honda Pilot 2nd gen is only available with one engine and gearbox combination. Front-wheel drive is standard, while AWD is an optional extra. This is worth keeping in mind if you live in a cold-weather state, but it doesn't add to the driving experience. The Pilot is equipped with Honda's tried and tested 3.5-liter J35Z4 V6 and here it has a power output of 250 horsepower and 253 lb-ft of torque. All models send the power to the wheels via a five-speed automatic transmission.

One of the main complaints owners have is the high fuel consumption. Most of the used cars we review post better fuel consumption figures than the EPA-estimated figures, but the Pilot is not one of them. It seems there is some merit to the complaints about the Honda's thirsty nature. However, this is par for the course for a large-capacity naturally-aspirated V6-engined SUV and compares favorably with like-minded rivals at the time, such as the Toyota Highlander 3.5 V6.

The Pilot is a fairly basic car when it comes to safety. Models with infotainment screens have a rearview camera, but that's it as far as modern technology goes. The rearview camera became standard on all trims for 2013. It does have the basics covered, as all models have ABS, traction and stability control, dual front, side, and curtain airbags.

Like most Hondas of this era, the Pilot has a simple trim structure. From 2009 to 2015, it is available in LX, EX, EX-L, and Touring specification. During its final year on sale, Honda included the special edition SE trim. Each successive trim has everything the preceding trim has, plus new equipment, so we won't repeat every item for every trim. If a trim receives new features in a certain year, the higher trims also get these features if they didn't already have them before. 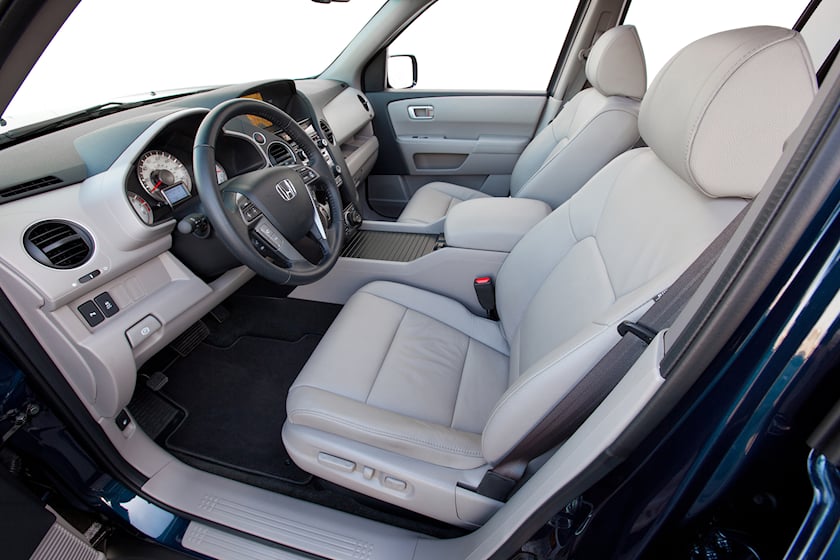 The 2nd-gen Pilot is basically a box on wheels, and it's as spacious as it looks. Honda somehow manages to fit three rows large enough for adults, while still retaining a large trunk. The third row has less hip room, but the head- and legroom are superb. The Pilot has the same sort of Magic Seat arrangement made famous by the Honda Fit. The seats don't just fold forward, but they fold completely flat, giving you a huge amount of easily accessible cargo space. With the second and third rows folded flat, you get 87 cubic feet to work with.

Depending on the position of these benches, you get between 16.5 and 18.5 cubic feet of cargo capacity with all the seats up. That's enough to fit all the kids' schoolbags and some weekly groceries, to boot. With the third row stowed, the Pilot has 47.7 cubes. You can easily fit a month's worth of groceries back there. The interior quality is typical Honda. The plastics look and feel hard, but the interior is bolted together properly. You can just feel the quality while riding in a high-mileage 2009 model with zero squeaks and rattles. The facelifted model is even better thanks to material upgrades and more sound dampening. The pre-facelift model doesn't feel like an ox cart full of empty cans, but the difference between the two models is noticeable.

Honda has just over 1,000 dealers in the USA, mostly scattered around the major hubs. You won't struggle to find an independent dealer that will look after the car for much cheaper, either.

The Pilot is a fairly affordable car to service with an estimated cost of roughly $7,500 to $8,000 during the first ten years of its life. A basic oil change service will cost roughly $150, while a major annual service is roughly $550.

It's worth noting that Honda's service regimen is fairly strict, as the technicians are trained to start with major inspections at 15,000 miles. Most manufacturers tend to do thorough inspections at 60,000 miles. You can expect a $1,500 service at around 100,000 to 120,000 miles. The 3.5 V6 in the Pilot uses a timing belt, which needs to be replaced at 105,000 miles. It's a labor-intensive job, which is why the bill is so big. You should probably replace the water pump at the same time to save on labor because it runs off the timing belt. The entire job of replacing the timing-belt kit and pump shouldn't cost much more than $550.

The 2009-2015 Honda pilot problems and recalls are mostly minor. The most well-known is the Takata airbag recall, which also affected several other manufacturers and millions of cars. The airbag problems include missing rivets, incorrect installment, and propellant degradation.

Other common problems and recalls include incorrect seatbelt stitching and improperly tightened left and right front damper brackets. There are only two known engine recalls, though the first is more related to the fueling system. The vent shut float valve in the fuel tank did not meet specifications, and Honda recalled around 9,000 Pilots because of the possible fire risk.

The second engine recall was for premature piston wear due to the incorrect heat treatment during the manufacturing of the pistons. It's also commonly known as the Honda Pilot misfire recall. Honda picked up on the problem quickly and, as a result, only 270 cars had to be recalled.

These are the model year error codes you'll most likely encounter when shopping for a 2nd generation Honda Pilot:

The Honda Pilot is generally a robust car, but there are some complaints from owners. We researched every complaint and, in certain cases, it was just two people per year complaining about sunroof, moonroof, and driver's seat problems. The latter was a complaint about an uncomfortable seat, which is an extremely subjective thing. It would not be fair to Honda to call these common flaws, but we put them here anyway so you have a full list of things to look out for. A rare engine problem is the loosening of the bridge bolts holding down the rocker arms, which will develop play and may emit a ticking or chattering sound. They have to be retorqued to the correct value. Wheel bearings can also sometimes wear out, causing a humming sound. These can cost as much as $380 per bearing to replace.

While it's not a typical flaw, at least five people per year complained about air-conditioning - or AC - problems. It seems the AC is not powerful enough for such a big car, but the problem was solved when Honda introduced tri-zone climate control in 2012. Look out for batteries draining too quickly, which is sometimes caused by a sticking AC relay - and is cheap and easy to fix. The odd AC compressor failed beyond 100,000 miles and that costs $1,500 to replace. Owners also reported electric problems. These problems range from rats chewing through the soy-based wiring to door lock problems because of a key fob battery or a blown fuse.

Some 2009-2015 Pilots experience failure of the low-beam headlights, often in short succession of each other. The problem is with the wiring harness connection at the headlight stalk where the lights are switched on and off. This connection overheats and can even melt, causing the headlights to fail. Sometimes, sunroofs just won't open and it's usually the control module powering the sunroof that is at fault. In fact, software reprogramming most often fixes the problem without the module having to be replaced.

Some owners even complained about suspension problems, calling the Honda unwieldy. Since it's a crossover, we don't expect it to handle like an S2000. The handling is also not so bad that it ever feels like it's going to topple over. However, there was an issue with the lower control arms according to TSB 15-045 and Honda extended the warranty of affected Pilot models. These control-arm bushes cost around $600-$700 to replace. The 2nd generation Pilot never had the best infotainment system, so owners complained about the backup camera, radio, and Bluetooth problems. There are also a few tailgate problems. We can't blame Honda for this one, as it's a common problem with almost every used SUV and minivan. The tailgate struts eventually start leaking and then fail. You can buy a set of durable replacement struts for $25. Lastly, the interior trim does not always hold up well and there were several reports of the seat trim and leather upholstery wearing out prematurely and looking shabby.

We'd avoid the pre-facelift models if only because of the trim updates and improved sound dampening. The facelifted models also have more standard features. We wouldn't go for the base LX trim unless you own a taxi company. While it has nice features, the Pilot is only really suitable for a family from EX trim and upwards.

The facelift EX trim offers the best balance. It comes with tri-zone climate control, a power-adjustable driver's seat, and a nicer infotainment system with Bluetooth connectivity. We'd go the extra mile and look for one of the final year SE models, which add 18-inch model-specific alloys, a sunroof, and a rear-seat entertainment system. The 2015 model year is the least troublesome of all.

The 2009-2015 Honda Pilot is a Honda, which means it will likely outlast you if you take care of it. Most of the common problems mentioned here are easily avoidable by sticking to the regular service intervals. There's no shortage of 2nd-generation Pilots available and the good news is that the initial buyers tended to go for the top-trim models because they were so affordable. Yes, it doesn't have the same modern technology as a new car, but a used Pilot gives you a lot of practicality, space, and comfort at an extremely reasonable price.