The 1st-gen Nissan Titan was treated to a light restyling for the 2008 model year, with no body panels changed and only some front-end tweaks to the grille, bumper, and headlights. After that, nothing of note changed again until it was replaced for the 2015 model year. 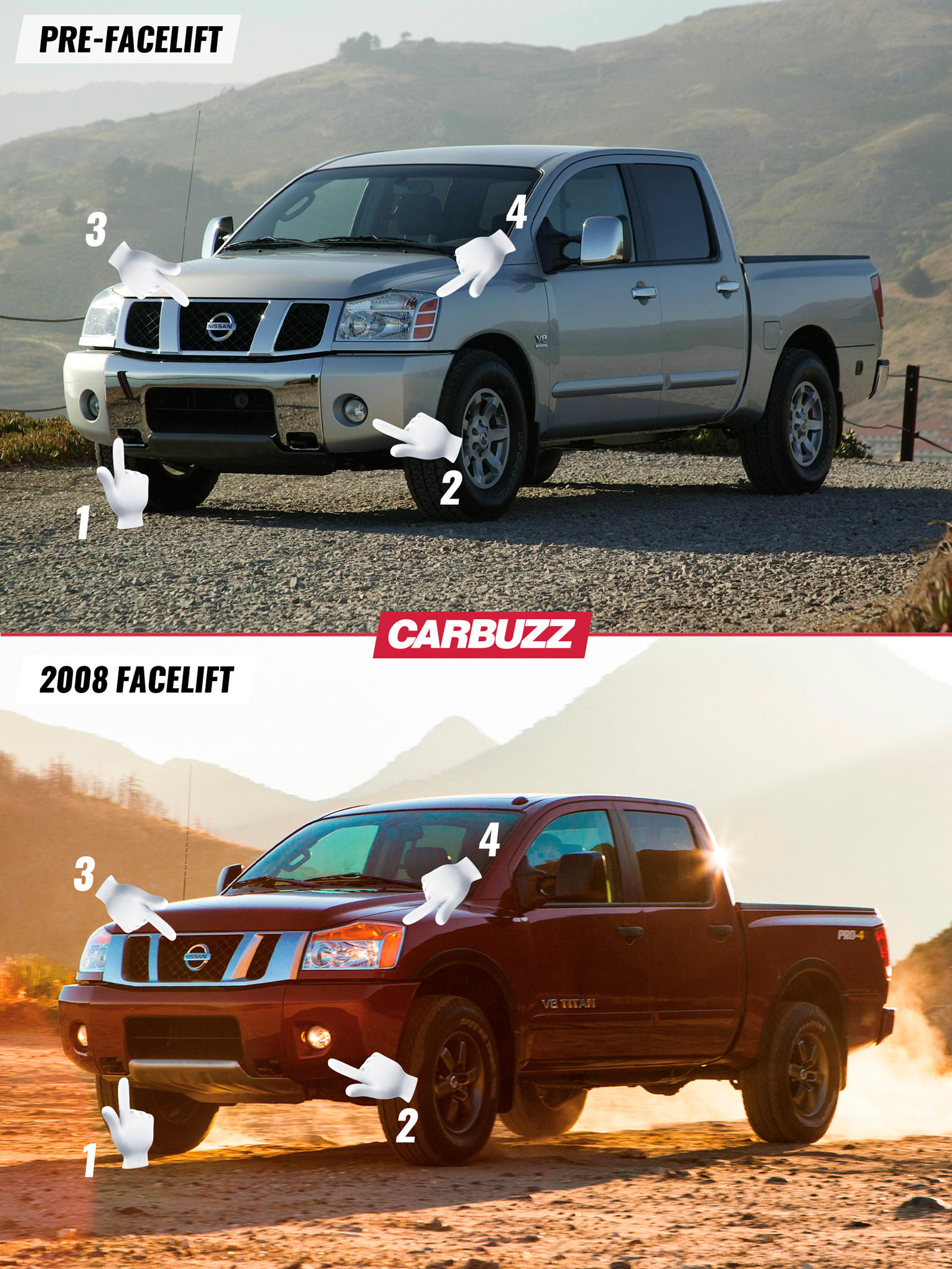 The 2008 facelift is given a new front bumper with a slightly larger air intake 1. The fog-light slots are D-shaped 2. The outer vertical grille bars adjacent to the headlights are much thicker and the inner "V" bars thinner 3. The redesigned headlight lenses retain their overall shape, but the vertical side marker light and horizontal "eyebrow" turn signal above the headlights join each other to form a distinctive "L" shape 4. 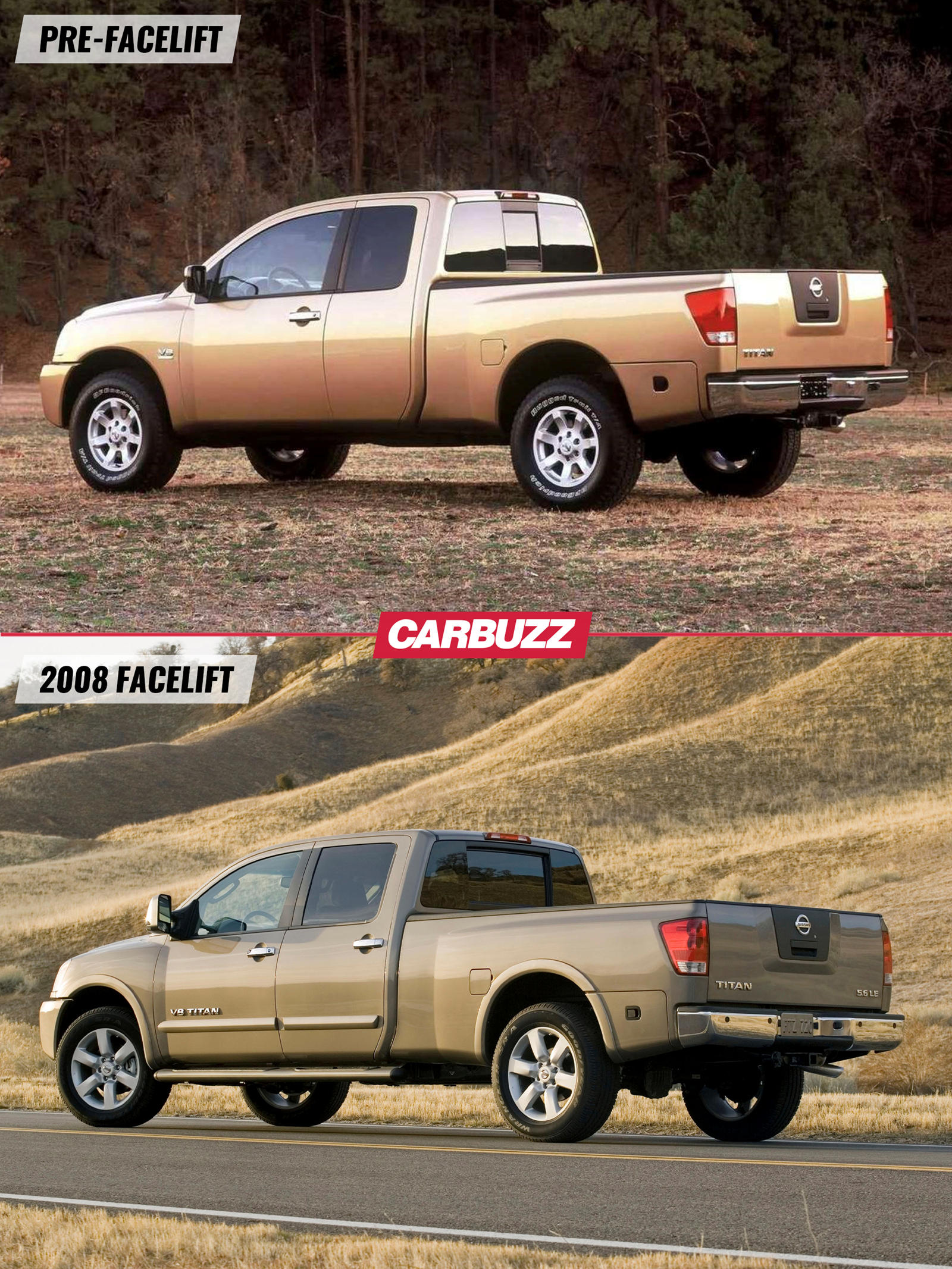 The 2008 facelift receives no rear-end changes whatsoever. In fact, the Titan looks the same from behind for its entire 12-year production run. 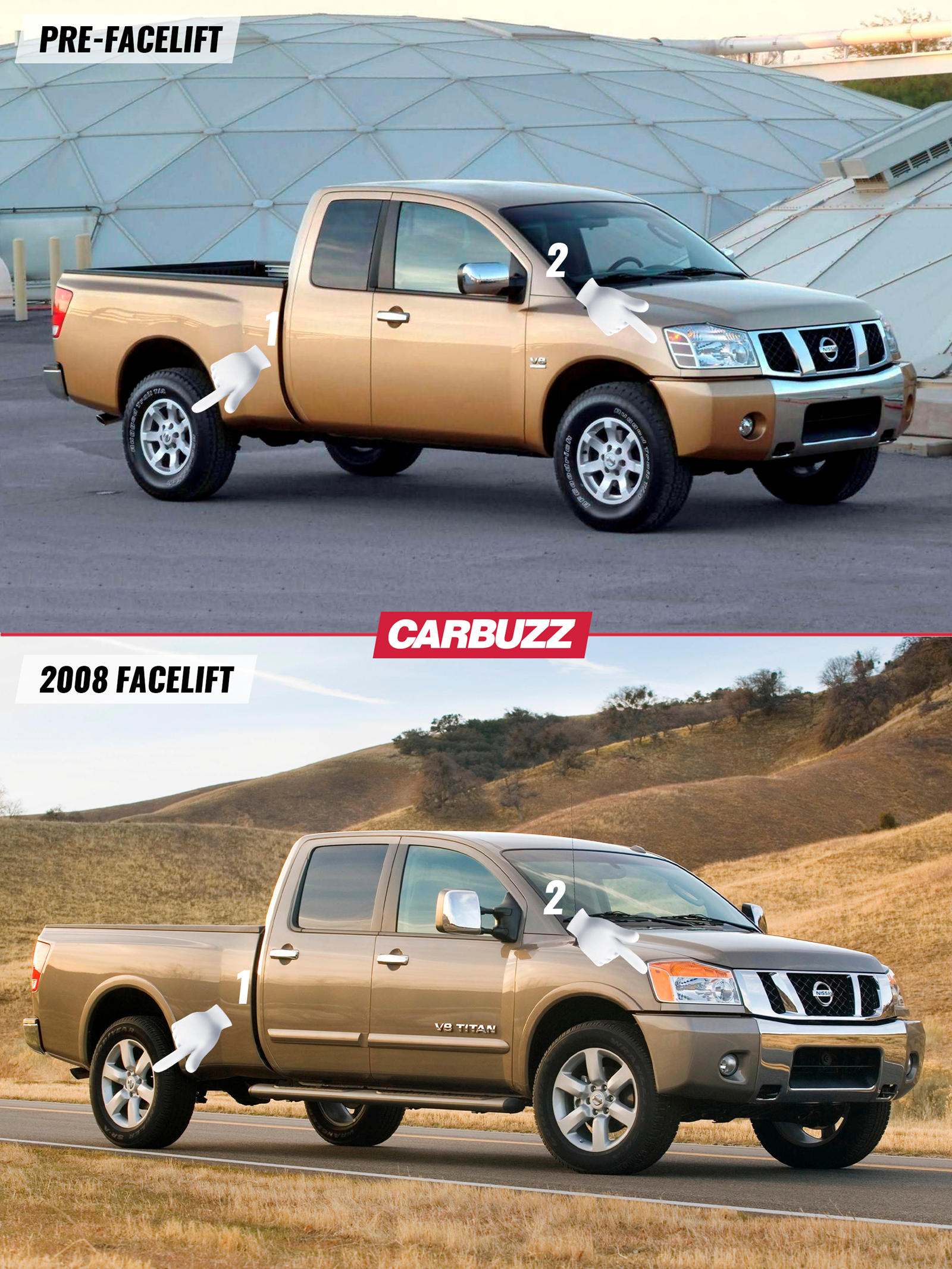 Despite the obligatory new wheel choices 1, nothing different can be spotted on the side of the 2008 facelift except the distinctive orange side marker lights in the new headlight clusters 2. 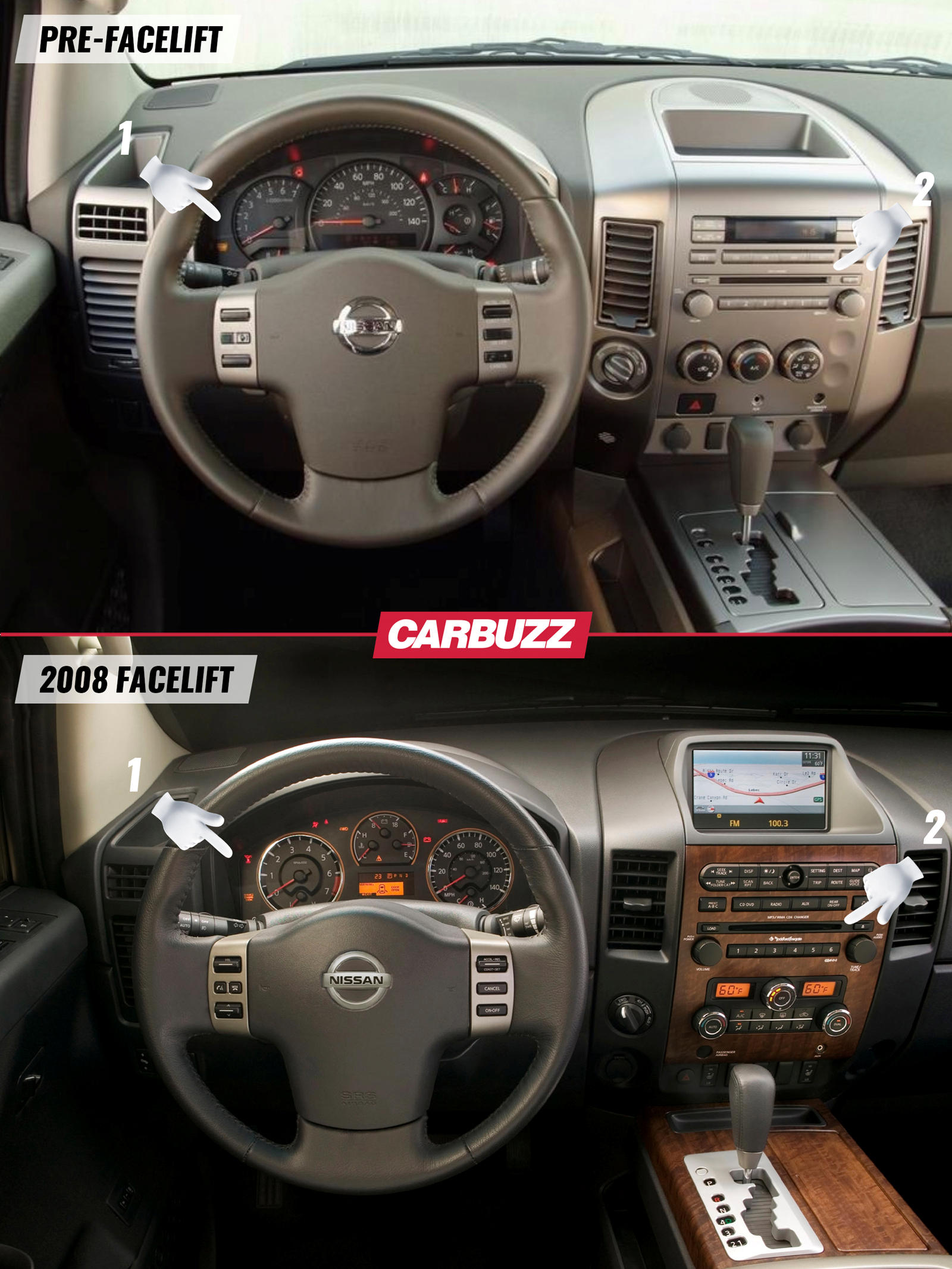 For 2008, the semi-circular gauges are replaced with a new gauge cluster featuring restyled, round gauges. The speedometer of the 2008 model no longer dominates the display and moves from the center to the left, while the identically sized rev-counter mirrors it on the right, with the auxiliary gauges no longer scattered around the cluster, but arranged in a circle between the two main gauges, above the new driver-information display 1. Some colors and materials are different, but the interior retains the pre-facelift model's design and layout. The previously integrated audio systems make way for squared-off double-DIN-sized units 2. Redesigned seats provide better comfort and support.

The first-generation Nissan Titan was only ever offered with a single engine and transmission. The 5.6-liter VK56DE V8 gas engine develops 305 hp for the 2004-2007 Titan and is uprated to 317 hp for the 2008 facelift. The only transmission is the Jatco RE5R05A five-speed automatic. This durable combination is undermined a little by a fragile cooling system, with a radiator prone to cracking being the main culprit. Besides the obvious damage that can occur to an engine if the coolant system does not work properly or leaks, the transmission cooling lines also run through this radiator and when the radiator fails, the coolant can enter the transmission cooling lines and find its way into the transmission, quickly ruining it.

Even though it couldn't rival home-grown competitors in terms of sales, the 1st-gen Titan competed in the high-volume truck segment. Therefore, the EPA has received many reports of drivers' real-life fuel consumption, which it publish esalongside its estimates for comparison's sake. Either way, the Titan is not a frugal vehicle:

The 2005 first-gen Titan was the first one tested by the NHTSA and only front crashes for the driver and passenger were performed, for which the Titan was awarded five and four stars, respectively. For 2006, rollover tests were added, for which the 2WD Titan scored four stars and the 4WD model three stars. The NHTSA never crash-tested the Titan against its stricter 2011+ criteria and its rollover scores remained the same throughout its life. Over at the IIHS, the original 2004 Titan's moderate overlap frontal crash was rated "Good", but its original side impact only "Marginal" with the optional side airbags fitted - and "Poor" without them. Roof strength was rated "Adequate".

Not many safety features were fitted at launch and the only standard ones on all trims are dual front airbags, ABS brakes, and a tire-pressure monitoring system, while side airbags and stability control were optionally available on upper trims. The 2005 Titan receives active front headrests and for 2006, auto-dimming side mirrors become standard on top trims and optional on others. For 2010, safety is substantially shored up with stability control, side airbags, and curtain airbags becoming standard on all trims. A backup camera is made standard on select trims for 2013.

The three main trims at launch were the XE, SE, and LE. For the 2008 facelift, an off-road-orientated Pro-4X trim was added. For the 2010 model year, the trim levels stayed essentially the same but were renamed, with the XE becoming the S, the SE becoming the SV, and the LE becoming the SL. 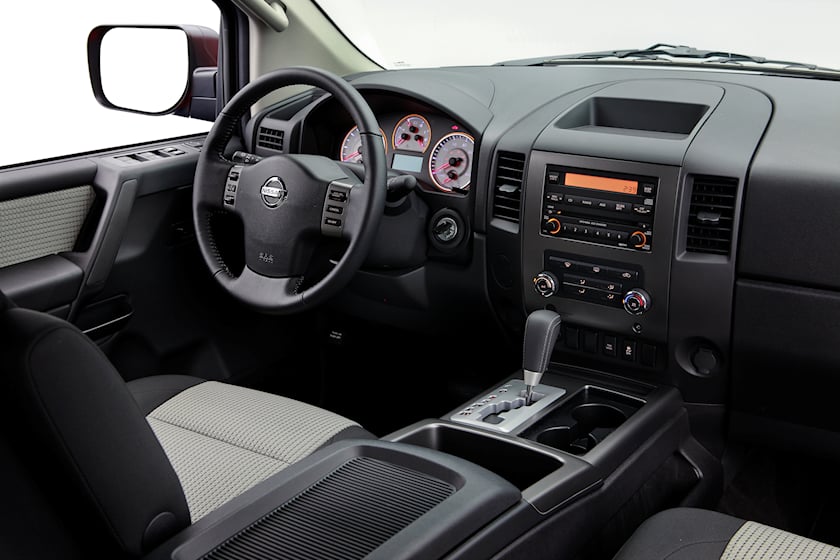 The King Cab is not really meant for transporting adults in the back, with only 33 inches of legroom available. The Crew Cab, however, is truly spacious, with over 40 inches of headroom and legroom available in the second row. The Titan Crew Cab can seat up to six people with the front bench fitted, or five with the front captain's chairs, which replaces the center front passenger's space with a center console. The seats of most early models were trimmed in Graphite, Titanium, or Steel cloth, with Almond and Charcoal becoming the default cloth color choices from the 2008 model year, with velour inserts on SV and Pro-4X trims. Colors were further reduced to Charcoal only by 2015 on trims with cloth seats. The LE and SL trims sport plush leather upholstery. The predominantly black instrument panel is relieved by satin-silver accents on the steering wheel, around the gear shifter, and on the center stack.

The VK V8 engine is a tough beast and, considering that Nissan specifies oil changes every 7,500 miles, it should last almost forever if you stick to the service schedule. At the time of this basic lube service, a Nissan dealership would also rotate the tires. Besides the lube services every 7,500 miles, more comprehensive services are performed every 15,000 miles, which include replacing the cabin air filter and checking and inspecting all the other fluid levels, as well as the troublesome axle shaft oil seals. The engine's air filter is replaced every 30,000 miles but might require replacement sooner if you frequently traverse dusty roads. The coolant system should also be drained, flushed, and refilled at 30,000-mile intervals. Even though Nissan doesn't specify it, most experts agree that the transmission fluid should be changed every 30,000 miles. The spark plugs should be replaced every 105,000 miles.

The problem with the first-generation Nissan Titan A60 is not the basic design and durability of the engine and transmission - which are very good - but other systems that may cause these components to fail. The biggest problem by far is the radiator, which is prone to cracking. Furthermore, sincethe transmission oil's cooling lines also run through the radiator, when the radiator fails, the coolant can get into the transmission and quickly ruin it. Unfortunately, the poor design of the rear axle's breather system also means that it clogs easily, causing excess pressure to overwhelm the axle seals, leading to oil loss and eventual axle failure. Aftermarket fixes are available for the breather system, which should ideally be done with fresh axle seals in place.

All models in the 2004-2015 Nissan Titan 1st gen have the same understressed V8 engine and traditional torque-converter five-speed automatic transmission, both of which are tough and durable and should last a long time if they get clean oil on schedule. However, the cooling system is not quite as tough and needs to be watched closely. A cracked radiator could not only cause overheating, but it can allow coolant into the transmission, which could ruin it. Therefore, it is recommended that you always keep a close eye on the cooling system and transmission to ensure that there is no coolant in the transmission and no transmission fluid in the cooling system. Failing axle seals are an issue, too, which can be avoided by retrofitting a proper aftermarket axle breather system.

A few 2006-2008 Nissan Titans suffered from broken clock springs, while pre-2008 models suffer from rapid rear and tear of the interior plastic trim. There are some 2008 Nissan Titan power window problems and some 2005 Titans' door mechanisms had to be replaced because the doors could no longer be opened.

Generally speaking, there are very few significant Nissan Titan starter, 4 wheel drive, CD player, or cruise control problems to report - these systems all being quite trouble-free. 2008-2015 Nissan Titan Pro-4X problems are no more numerous than other Titans despite having more specialized systems.

Here are a few common OBD2 error codes to be on the lookout for:

Some of the biggest recalls on the Titan were for a failed ECM, problems with airbags and restraint systems, and for a faulty fuel gauge. Here is the full 2004-2015 Nissan Titan recall list:

In the 2004, 2005, and 2006 Nissan Titan IPDM recall, Titans were recalled for a faulty electronic control module (ECM) in the intelligent power distribution module (IPDM) that may cause a stall. Be wary of codes P1065, P0430, P0420, or P0421 on the 2004 Nissan Titan gas or flex fuel 5.6L as they may still be suffering from the problem. More than 30,000 Nissan and Infiniti models were recalled for faulty labels and the Titan was also affected. Some 2004-2010 Titans may have lower improperly welded control link assemblies in their suspension systems. Some 2004-2006 Titans that were fitted with a Hopkins trailer brake controller may have an incorrectly placed wire in the controller's harness that leads to the improper routing of the wires to the vehicle's control system. A number of 2004 Titan Crew Cab models were recalled to replace a center rear seatbelt, of which the retractor spool may lock in the retracted position. Many 2004 Titans were recalled for rear pillar seatbelt anchorages that do not comply with energy-absorption requirements. There was a recall for faulty wiring that may affect pretentioners and airbags as well, plus the Takata airbag recall that affected 2013-2015 Titans.

There were a few 2004 and 2013 Nissan Titan shifter problems that resulted in recalls. In two separate but similar gearshift lever recalls for 2004 and 2013 Titans, damage that may have occurred to the gearshift lever during assembly may cause the lever to slip out of Park or allow it to be shited out of Park without having to apply the footbrake. Some 2005-2009 Titans were affected by a recall for a faulty fuel gauge. Take note that, for the first-gen 2004 Nissan Titan V8, engine error code P0463 may be present in such a case. In the 2005 and 2006 Nissan Titan AC recall, a Visteon air-conditioning condenser fan may have been improperly sealed, thereby letting in moisture, leading to overheating and increasing the risk of a fire. There were recalls for 2006 door latch failures, 2008-2010 brake pedal problems, and 2008 seat problems too. The 2013 Nissan Titan brake recall was for a brake master cylinder that may intermittently reduce the braking assistance applied to the front wheels.

The pre-facelift 2004-2007 Titans were by far the most problematic and subject to the most recalls. They also have less equipment and worse safety. In terms of wallet-breaking mechanical problems - mostly related to the cooling system and axles - they are the biggest risk, on top of being the oldest, too. Unless you specifically want a no-frills work truck, we would avoid the drab XE/S too, with its steel wheels and workaday spec.

The Titan was substantially upgraded with stability control and side and curtain airbags as standard for the 2010 model year, so it really can double as safe, modern transport, even today. There were still a few niggles up to around the 2011 model and the 2012 model seems to be a particular sweet spot, with all the latest upgrades and safety features, yet with the excellent reliability and very few issues. The mid-range SV was always the most well-balanced in the range, with the sensible 18-inch tires of the base S, but with alloy wheels and a lot more equipment, making it proper modern, safe, family transport.

The first-generation Titan was a solid effort from Nissan as a full-size truck and it avoided the mistakes Toyota made with the first Tundra, namely making it too small. It was also less rust-prone than its contemporary Tundra rival. That said, Nissan took a while to sort out the Titan's problems and a $400 radiator can cost you dearly in the end, potentially ruining both the transmission and engine. Therefore, stick to a later 2012+ model, give it a thorough once-over, and make sure it has a full service history.