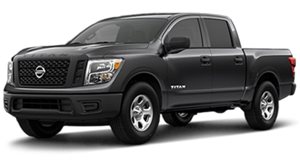 In many aspects the Titan is right in between the Silverado and the F-150.

Nissan is now two years into the Titan's second generation. It's been re-designed from the top down, offers simple choices of models and one engine. It seems though, that with entering the full-size truck realm amongst competitors like the F-150, Silverado 1500 and Ram 1500, Nissan didn't want to step on any toes. In many aspects the Titan is right in between the Silverado and the F-150. This can be good; it means Nissan wants its Titan to just be a part of the full-size truck circus, to prance around like the rest of them and live a happy care-free life. It can also be bad: the Titan is not innovative, so it's not going to wow its competition. This will hurt sales, sure but more valuable is the long-term. The future of the Titan may be at stake, if Nissan doesn't come up with a reason for people to buy it. That being said, for the moment the Titan seems like a solid truck that offers a range of mid-level features and holds its own in its class. 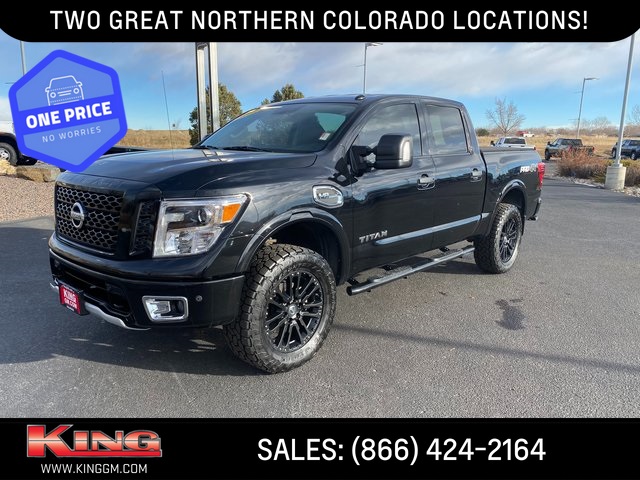 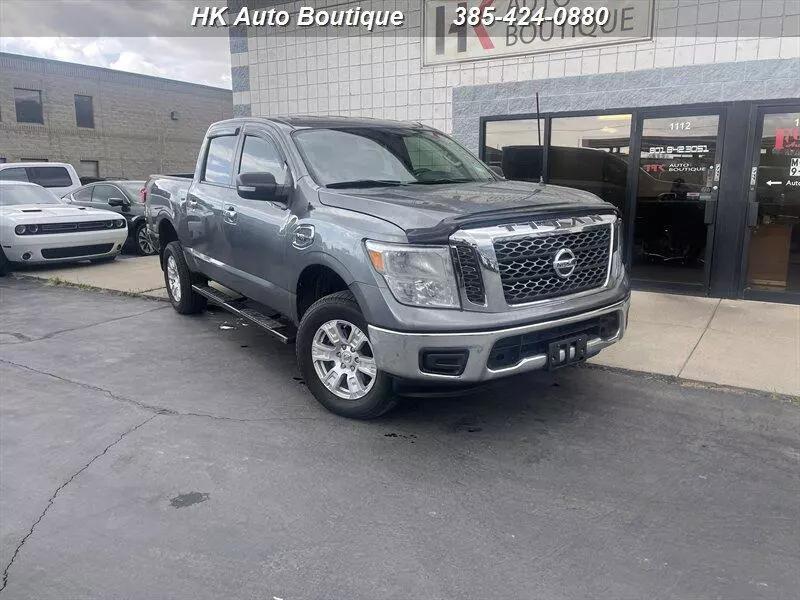 Interior: Just like the F-150, except not as big

The back seats in the crew cab are big and comfortable, with plenty of legroom for a whole family.

Just as stated, the Titan doesn't step on any toes and this more apparent when stepping inside. Obviously heavily influenced by the new F-150, the Titan very nearly matches the size and convenience of the Ford with a few exceptions. The Titan offers a 7-inch touch screen, which is a tad on the small side, and it makes the buttons that much smaller. Otherwise, leather seats and the sporadic wood paneling offer almost a log cabin-like feeling. It's big on the inside like the F-150, with a gigantic armrest and cup holders large enough to fit a 7-11 Big Gulp. The back seats in the crew cab are big and comfortable, with plenty of legroom for a whole family.

This doesn't do much to dissuade the argument that the Titan isn't really offering anything new. The exterior is fairly similar to the F-150 as well, with a giant grill spanning a couple feet tall and about the size of a radiator. It does have its own accents, like the shape of headlights and that big "Nissan" logo in the center. It has more form-fitting curves spread out over the body, and it looks like a normal sized truck. Standing next to the Ford almost feels like standing next to a semi. In a way driving the Titan may be easier than driving most other trucks. Assuming standing next to it isn't an intimidating experience, the Titan doesn't invite an uneasy feeling while driving it, like fear of hitting everything on the road. It's approachable, if nothing else.

Car Culture
Cars And Manufacturers With A Horse Logo

Industry News
BMW Starts Building The Most Unique X5 Ever

Handling: The Titan moves better than most trucks

When it comes to handling, the Titan again holds its own against the competition. Sharp steering, stiff brakes and quick acceleration make for a smooth ride. Of course it's important to remember that it's still a truck, and probably shouldn't participate in any unofficial mountain drifting competitions. The Titan doesn't seem to be entering, or discovering any new frontiers with its handling or the way it drives. New trucks feel solid as it is though, so apparently Nissan haven't made the Titan any worse than its competitors, which is good. Just the opposite in fact: Nissan boasts better handling and braking than the F-150.

The Titan has double wishbone suspension in the front, but then so do all the other big trucks in its class.

Drivers are also reporting a very light steering system, much like the F-150. Dodge Rams have a tendency to feel a bit bouncy through corners, and even the F-150 is easily startled when given a sudden jerk of the wheel combined with sudden acceleration. This does not seem present with the Titan, which stays calm and cool through a corner. It helps that the Titan has double wishbone suspension in the front, but then so do all the other big trucks in its class.

The roar of the Titan's V8 has a unique, somewhat high-pitched purity that is its own sound.

Engine options for the Titan are limited, but it keeps things simple. The Titan's 5.6-liter V8 produces 390 horsepower and almost 400 lb-ft of torque, which isn't going to break any records but it's enough to move this 5,000 pound steel beast through just about any circumstance. The Titan moves without hesitation, plows through any situation and besides that it sounds pretty. The roar of the Titan's V8 has a unique, somewhat high-pitched purity that is its own sound. Ford's F-150 has a moment of hesitation before the power kicks in, but before long the journey to 90 miles per hour comes to an abrupt end. The Ford's V8 has a distinct deep sound, much like the deep throaty Dodge and the hollow sound of the Chevy. A different engine option is available, but only if you're willing to fork over an extra $11,000 for the Titan XD. It's the super duty version of the Titan, and if desired can come equipped with a 5.0-liter Cummins turbo diesel V8. Producing a bit more than 300 horsepower and 555 lb-ft of torque, it's not going to break any records, or even come close to the Ram's 445 horsepower, over 900 lb-ft diesel engine. The important thing to take away from this is, that there is a diesel option available for a Nissan truck. However this puts the Nissan in a different class altogether, what's called the "super-duty" class. With the XD starting at around $36,000 (gas engine), the XD is more expensive than the Silverado 3500, and can tow about half as much weight.

The Titan comes with a 7-speed automatic transmission.

The Titan comes with a 7-speed automatic transmission, and when the throttle is shoved to the floor the transmission doesn't hesitate to downshift and deliver a ton more power. The truck doesn't seem to run out either; there's always more power to spare. This is a nice aspect of the Titan as opposed to Ford's automatic transmission, which does not offer seamless gear shifting. What's interesting is, with the extra gear how the Titan manages to get such poor gas mileage. Ford has a transmission in its F-150 that has only six gears, though the argument can be made for it being possible for a transmission to have too many gears. Case in point: the 10-speed automatic gearbox that's bolted to one of the Ecoboost V6s.

Negatives: Some interesting choices by Nissan…

There is no V6 option for the Titan, unlike the Chevy and Ford.

The Titan's starting price for the single cab model starts at around $29,000, about $3,000 more than the F-150. It's a tough price to make sense of, as the Ford makes only about 5 less horsepower out of its 5.0-liter V8, and offers a few V6 options including an Ecoboost, which offers more horsepower and miles per gallon. The Titan gets around 15 mpg in the city and 21 on the highway, less than the V8 options offered in its competition's base models among the F-150, Silverado and the Ram 1500. Another thing to consider is that there is no V6 option for the Titan, unlike the Chevy and Ford.

It can't tow as much as the other trucksand offers virtually nothing unique.

It's painful to see that Nissan have made a very decent truck, with not the greatest potential. It's expensive; it can't tow as much as the other trucks (around 9,300 pounds towing vs the F-150's 10,400), and offers virtually nothing unique. Well, except for the sound of its gas V8. That aspect still belongs to the Titan. A good thing to take away from this truck is that it doesn't encourage brand loyalty: the Titan doesn't step on any toes nor does it come very close to other trucks' abilities but it's certainly no slouch. The Titan seems like it's the truck for people who don't want one but maybe need one, like snowboarders as opposed to construction workers.

Conclusion: The truck for non-truckers

Nissan claim an award, stating that the Titan has better handling and braking than the F-150.

What Nissan have made is a very good contender in the world of pickup trucks. It does the truck job very well. However, Nissan have made the Titan with one massive flaw: there's no real reason to buy one. With the F-150 being affordable performance, the Silverado a tried and true (cheap) workhorse, and the beastly powerhouse that is the all on the truck podium, the Titan doesn't have a real place to stand. Even Chevy has made strides with its V8 to be able to run E85, a fuel mixture that is 85-percent ethanol and therefore produces cleaner emissions. If Nissan decide to contend with the big American trucks with its XD that's not going to help either. The XD is outclassed, in almost every way by the numbers, by the heavy-duty Chevys and Dodges, and the super duty Fords. Nissan claim an award, stating that the Titan has better handling and braking than the F-150. Are they trying to make a sports-truck of some kind? All the hate aside, there's nothing wrong with making a comfortable, maneuverable and decently quick truck that has all the basics down pat. Where the truck fails though, is competing with cheaper, more capable trucks. The Titan does apparently come with the best warranty out of any other truck. Currently Nissan is offering five years or 100,000 miles, bumper-to-bumper. 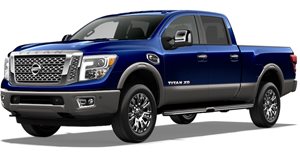 The most popular competitors of 2017 Nissan Titan: 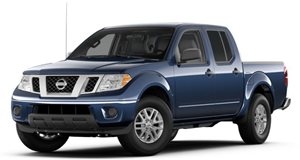 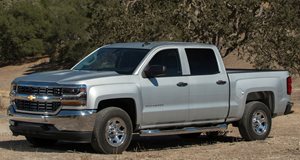 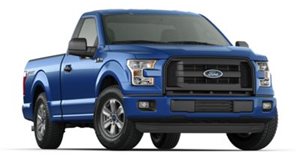 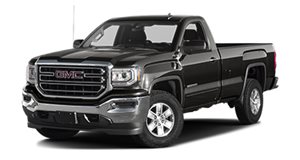 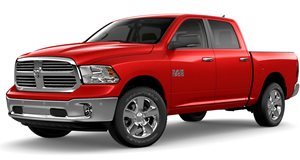 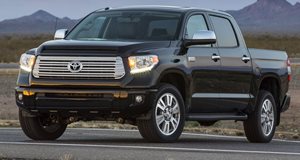 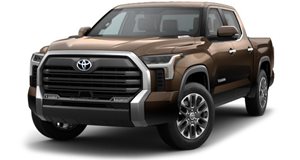 Check out some informative Nissan Titan video reviews below. 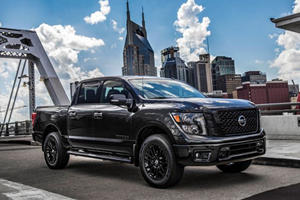 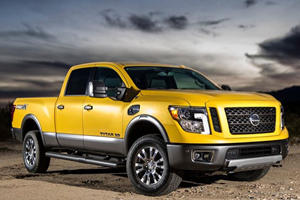 Nissan Titan
24
Nissan Has A New Plan To Sell More Titan Pickup Trucks
Because the current one ain't working. 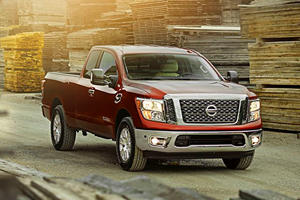 Reveal
38
Nissan Completes Titan Lineup With King Cab Harpoon At Ford
Thought the F-150 had too many options? Just look at the Titan lineup now.