After months of waiting, it has finally arrived. The new 2021 Ram 1500 TRX is officially the world's fastest, quickest, and most powerful factory-built pickup truck in the world. Starting with the already impressive Ram 1500, Fiat Chrysler Automobiles decided it needed the 6.2-liter supercharged Hellcat V8 along with a number of impressive off-road modifications. Why does such a vehicle need to exist? Because Ram was tired of the Ford F-150 Raptor getting all of the attention, not to mention customers.

It's important to understand Ram didn't simply just drop in this engine and call it day. A major engineering overhaul was conducted in order for the full-size truck canto handle the additional power without ripping itself apart. Aside from its impressive performance and off-roading capabilities, the Ram 1500 TRX is a true luxury vehicle equipped with lots of premium features and technologies for driver and passenger comfort and convenience. It's the best of all worlds and it actually comes with a reasonable starting price, all things considered.

The Ram 1500 TRX has a bold appearance that sets it apart. It's eight inches wider compared to a standard 1500 and its composite flares help to increase track width by six inches. The front axle was moved 20 millimeters forward in order for the massive 35-inch Goodyear Territory All-Terrain tires to fit. These tires are also offered with 18-inch beadlock ready wheels. The front bumper features LED clearance marker lights while a newly designed aluminum hood boasts LEDs integrated into the functional hood scoop. Other notable exterior elements include an optional full-length rock rail, power-coated aluminum running boards, and body-side and hood graphics.

The truck's box outers are not only wider than those on the regular 1500, but are also made from steel. There's even a cool bed-mounted spare tire carrier in addition to the full-size spare tire located below the bed. LED headlights and taillights are also present. The instantly noticeable R-A-M badge is found on both the tailgate and front grille, which also has a new design for improved air flow. Also take note of the oversized tow hooks at front and back, and the integrated 5-inch dual exhaust pipes.

A Brilliant Interior Made Even Better

The TRX manages to improve upon the Ram 1500's best-in-class interior, using high-quality materials throughout such as optional hand-wrapped leather instrument panels. Customers have a choice of three interior options: premium cloth and vinyl, leather and suede, or leather and suede with red and carbon fiber accents. Interior features are based on the Ram Rebel, but buyers can choose from a number of equipment packages for added luxury, including heated and ventilated premium Natura Plus leather front bucket and rear bench seats.

Other notable features include a head-up display, new front seats with even tighter bolsters and embroidered logos, a 12-inch Uconnect touchscreen, and a custom plate located on the console lid listing the type of supercharger, boost output, horsepower, and the VIN.

True Off-Roader With Performance To Spare

Under the TRX's hood lies the same 6.2-liter supercharged Hellcat V8 found in the Charger and Challenger Hellcats, now producing 702 horsepower and 650 lb-ft of torque. Zero-60 mph in just 4.5 seconds is possible thanks to Launch Control and 100 mph happens in 10.5 seconds. The quarter-mile takes 12.9 seconds while top speed is 118 mph. The TRX manages that massive power thanks to an eight-speed TorqueFlite 8HP95 transmission.

Ram spared no expense for off-road upgrades. The TRX has its own unique suspension system with active damping inspired by desert racing trucks. It has forged aluminum front upper and lower control arms coupled with an independent front suspension. A Dana 60 solid rear axle with a 3.55 ratio featuring full-floating hubs and a rear differential are standard. A new Jump Detection system senses when the truck is airborne to prevent driveline-damaging power spikes. Five driving modes are available for normal conditions while Mud/Sand, Rock, and Baja off-road modes are there for more extreme situations.

The 2021 Ram 1500 TRX will carry a base price of $69,950, not including the $1,695 destination charge. The Launch Edition, limited to just 702 examples, will set you back $90,445. Meanwhile, a fully-loaded truck will pass the $100k mark. Bear in mind there are over 100 additional parts and accessories offered by Mopar, such as off-road lights, off-road rock rails, and the RamBar. Sales will get underway in the very near future while production will take place at the Sterling Heights Assembly Plant in Michigan.

The competition? Look no further than the Ford F-150 Raptor. To compare, the Raptor dishes out a maximum of 450 hp and 510 lb-ft of torque, 252 hp and 140 lb-ft less than the TRX. But the Raptor is also significantly less expensive, beginning at $52,855. However, it's also important to know an all-new F-150 Raptor is just around the corner, based on the just-introduced new F-150. Ford has been mum on details but we expect improved power, performance, and off-roading capabilities. It could also pack a V8.

In the meantime, the Ram 1500 TRX is the most extreme half-ton pickup truck you can buy today. 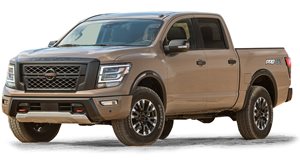 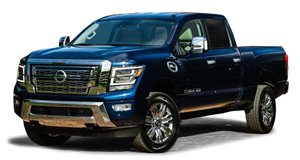 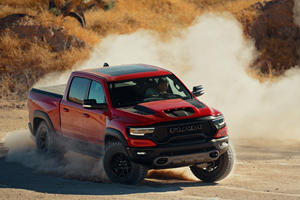 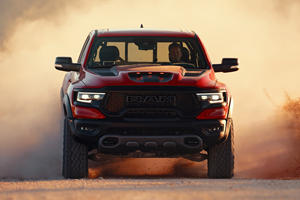 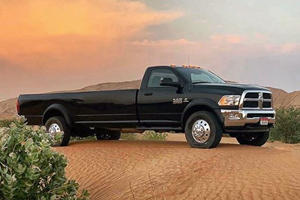 Trucks
17
This 16-Foot Ram 4500 Doubles As A Jacuzzi
This could be the greatest party truck of them all. 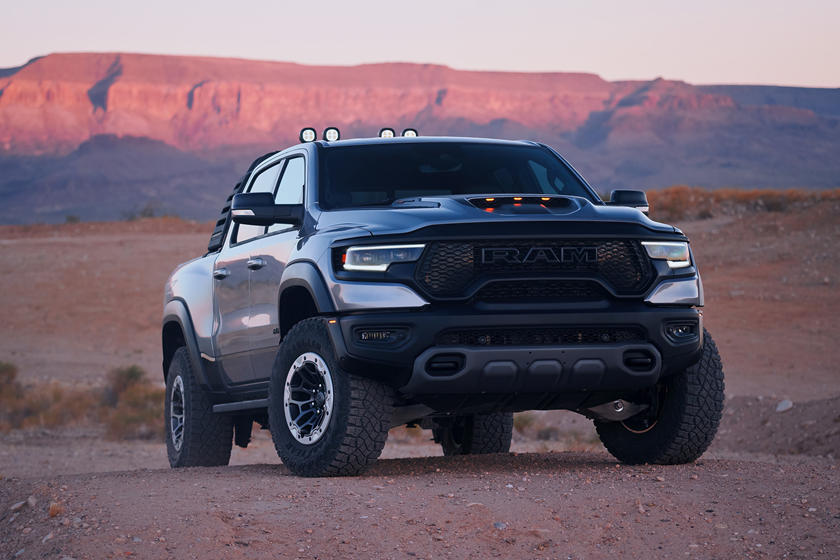 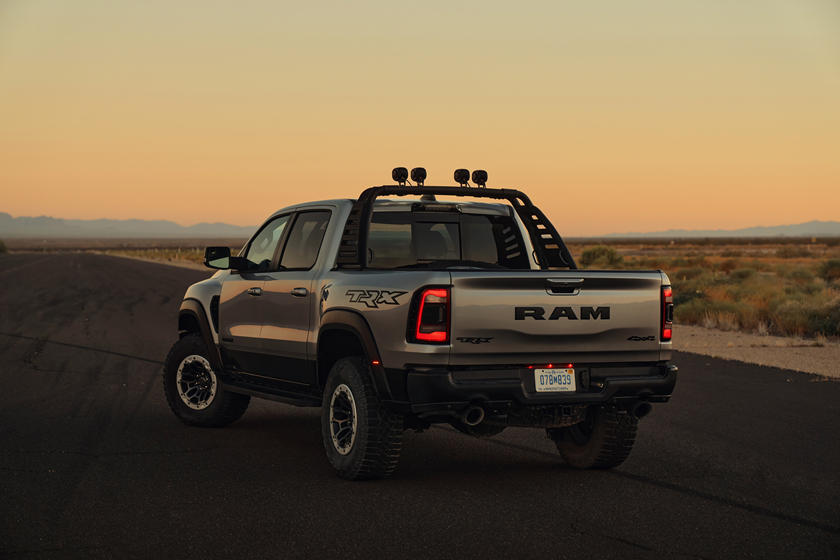 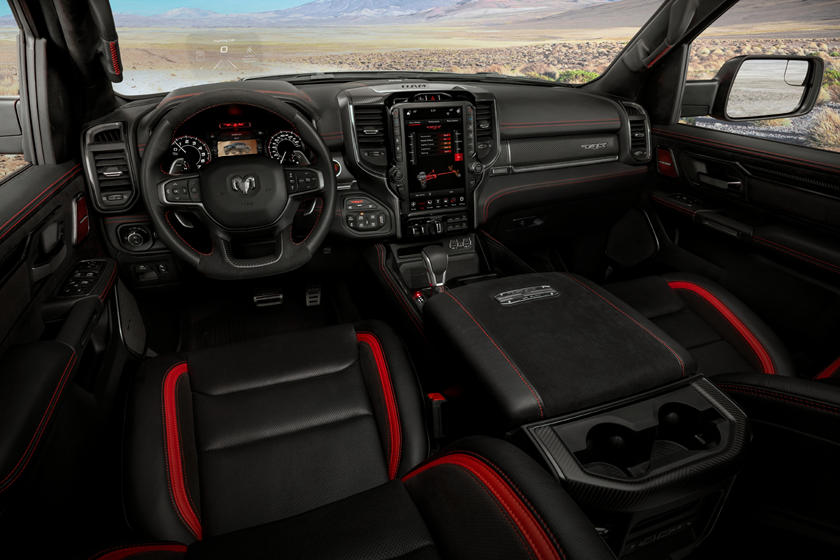 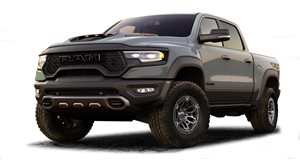