When Ford introduced the F-150 Raptor more than a decade ago, no other truck builder dared challenge it with a competitive off-road model. But why challenge the Raptor when you can obliterate it with a 702-horsepower nuclear explosion? Enter the 2021 Ram 1500 TRX, a Ram pickup truck powered by the same 6.2-liter supercharged Hemi V8 used in Dodge's Hellcat models. Ram hasn't just upped the ante here, it's torched the other players' cards.

Based on the full-size Ram 1500 Crew Cab, the TRX (pronounced T-Rex) was built for the sole purpose of outclassing the F-150 Raptor in every category. With 702 horsepower, a 4.5-second 0-60 mph time, and Bilstein Black Hawk performance shocks providing capable off-road performance, the new Ram 1500 TRX sets new benchmarks for the pickup truck segment. In fact, the TRX spawns a new category of supertruck, the likes of which the world has never seen before.

The Ram 1500 TRX is the 1500's brand-new halo model. It's officially the world's fastest, most potent factory-built pickup truck on the planet. Powered by the 6.2-liter supercharged V8 from the Hellcat, the TRX can complete the quarter-mile in 12.9 seconds at 108 mph. To cope with all that power, Ram had to revise the underpinnings completely with new suspension and larger brakes. As a halo model, the TRX comes as standard with most of the luxury features available lower down in the 1500 range, though it also comes in a lighter base model. It also looks far more aggressive than other 1500s thanks to fender flares, a functional hood scoop, and several other visual enhancements. 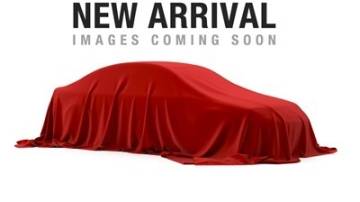 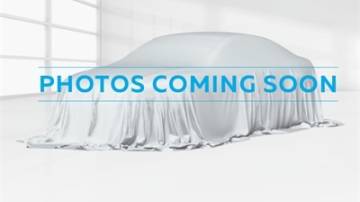 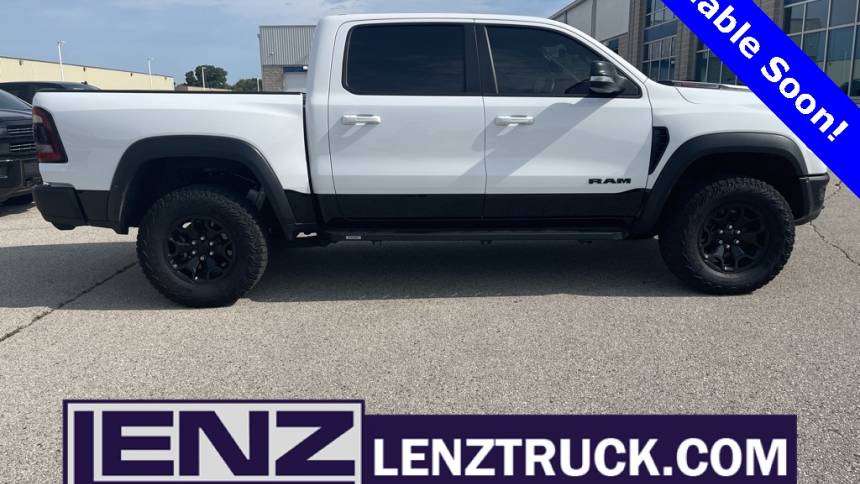 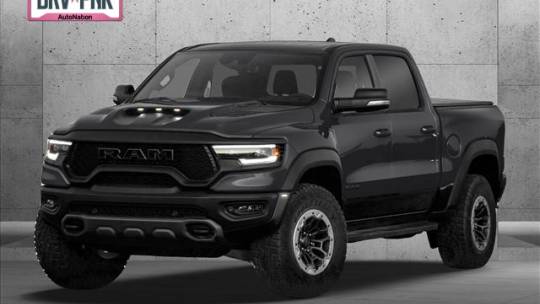 The term "rides like a truck" gets used a lot these days, but rarely to describe the Ram 1500. Even with all of the off-road upgrades, the Ram 1500 TRX pickup retains its civil demeanor. Though it can't match the pillowy softness of the Ram Limited's air suspension, the TRX never feels too upset when riding on rough roads. That's likely because this truck was built to tackle dirt at high speeds; potholes are meaningless to the TRX's 35-inch Goodyear Wrangler Territory tires. The TRX mostly retains the Ram's excellent highway manners too, though the chunky tires and supercharged engine intrude into the cabin a bit.

It's incredibly fast in a straight line, but the TRX still can't defeat physics. At over 6,000 pounds, the TRX feels every bit of its curb weight in the corners, making it tougher to hussle this truck on a back road. The massive power is easily accessible, but you need to plan your stopping zones ahead of time so as to not overwhelm the brakes. Ram says the TRX boasts the segment's largest brakes at 15 inches up front with two piston calipers, but even these massive stoppers struggle at higher speeds. With somewhat lackadaisical steering and such massive size, the TRX is best enjoyed in short light-to-light spurts.

Off-road, the TRX shines with outstanding capability. 2.6-inch Bilstein Black Hawk e2 adaptive performance shocks were developed specifically for the TRX, and help take big impacts with ease. The shocks provide excellent heat dissipation, helping them function over 100 mph, and each wheel gets 13 inches of travel. This truck even includes Jump Detection, which prevents drivetrain damage when airborne. A Dana 60 rear axle with a rear locking differential helps the TRX traverse rocky terrain, but this truck feels happier at higher speeds rather than slow-speed crawling. Ram includes three off-road driving modes, including Mud/Sand, Rock, and Baja. We found the latter to be the most entertaining, blasting down dirt paths at triple digit speeds. No street-legal production vehicle will keep up with the TRX off-road, and few off-roaders offer so much compliance on the road.

We can say unequivocally that the 2021 Ram 1500 TRX is the most fun we've ever had in a pickup truck. A Ford F-150 Raptor offers excellent on-road and off-road performance, but it's twin-turbocharged EcoBoost V6 can't hold a handle to the TRX's supercharged V8. With easter eggs of a tyrannosaurus rex eating a velociraptor scattered throughout the truck, Ram made it no secret why the TRX exists. We are here to say that those easter eggs aren't just a cheeky dig at Ford; the TRX's bark matches its bite.

No pickup truck even comes close to outmaching the Ram TRX's 702-hp rating. Ford has already announced an all-new Raptor using the same EcoBoost V6 found in the outgoing model, though a V8-powered Raptor R model is in the works and could possibly exceed the TRX's output using the GT500's supercharged Predator motor. Even if Ford does outdo Ram, we bet there's an even more powerful TRX skunkworks project using the nearly 800-hp Hellcat Redeye motor. It's a great time to be a truck lover.

Check out other Ram 1500 Styles

The Raptor is the high-performance pickup truck that kickstarted a segment. The question is, is it still the daddy? The F-150 Raptor is now entering its third generation, still powered by a 3.5-liter twin-turbo V6 engine. With the V8-powered Raptor R on the way, the current Raptor's specs of 450 hp and 510 lb-ft means it is comprehensively outgunned by the TRX. However, both are superb off-roaders and the Ford beats the Ram in some key areas here, such as with its better approach/departure angles. The Ford can tow a little more and it has a better payload figure, but it will be left behind in a traffic light sprint. For now, the bonkers TRX remains the king but its time at the top may be short-lived once the Raptor R arrives.

The 1500 TRX represents the apex of glorious internal combustion power in a truck, but its shocking consumption figures are outdated in a world that is moving towards full electrification. The Tesla Cybertruck is expected to represent a new wave of viciously fast electric trucks, but we still don't know exactly when we'll see the production version of this long-awaited pickup. For now, the Ram wins because you can actually buy one, but the Cybertruck will be even quicker when it arrives, at least in tri-motor form. It will also offer a much higher towing capacity and a better range in tri-motor guise than the thirsty TRX. Whether it will be able to match the sheer theater of the TRX is a question we'll have an answer to as soon as we can get behind the wheel of the Cybertruck. 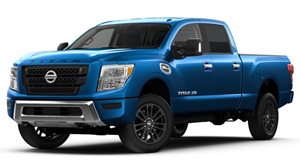 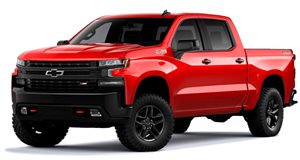 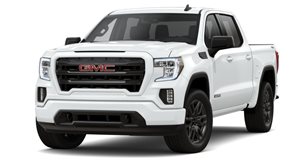 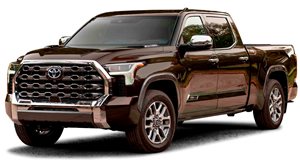 Check out some informative Ram 1500 TRX video reviews below. 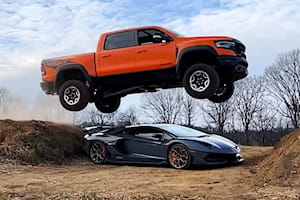 Video
12
Ram 1500 TRX Jumps Over $800,000 Lamborghini Aventador SVJ In Crazy Stunt
The stuntman owns both cars, so this was his prerogative as a car Youtuber. 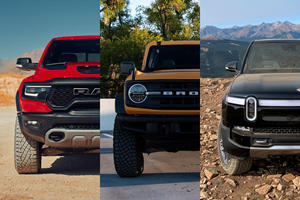 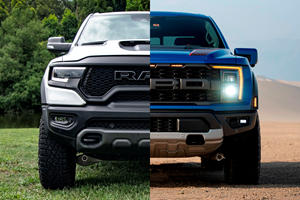 Comparison
12
Ford F-150 Raptor Vs. Ram 1500 TRX: Battle Of The Super Trucks
Should you plunk down your cash on a Raptor or TRX?