The 5th-generation Subaru Outback received a single facelift in its relatively short life and it was applied to the 2018 model, the second-last model year. 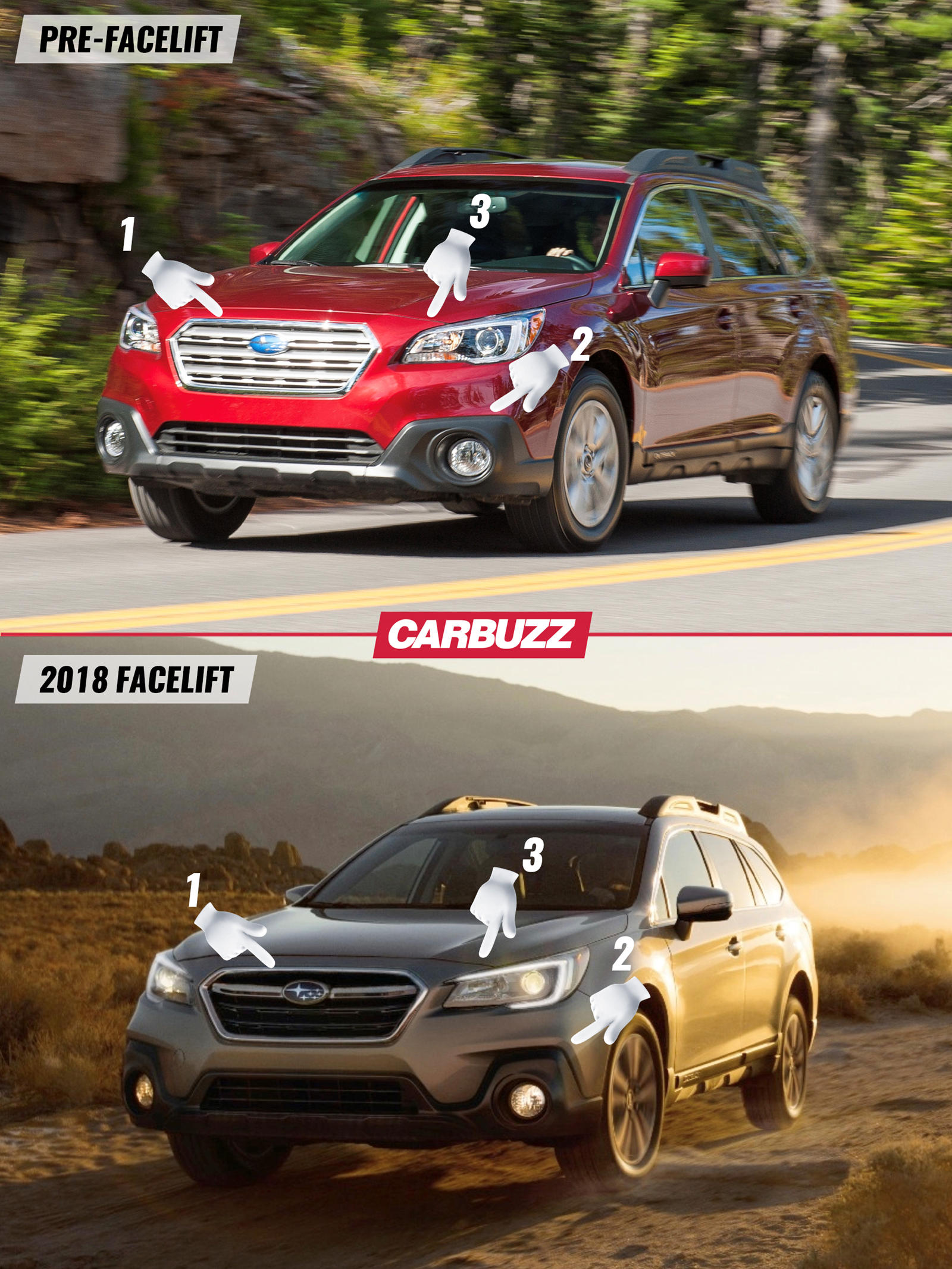 The rather fussy grille with all its chrome slats and slots was simplified and cleaned up. The facelift variant has a thinner chrome border and one thick chrome slat running horizontally through its top third - with the Subaru logo in the middle - and two thin slats below it 1. The bumper treatment is more aggressive, with the black fog light slots reaching up higher into the bumper and toward the headlights. Above these slots, the bumper gains crisp L-shaped creases 2. The headlights are subtly restyled and sharpened up, with the top edge of the headlight now running down to the grille with a pointy edge and no longer a smooth curve 3. 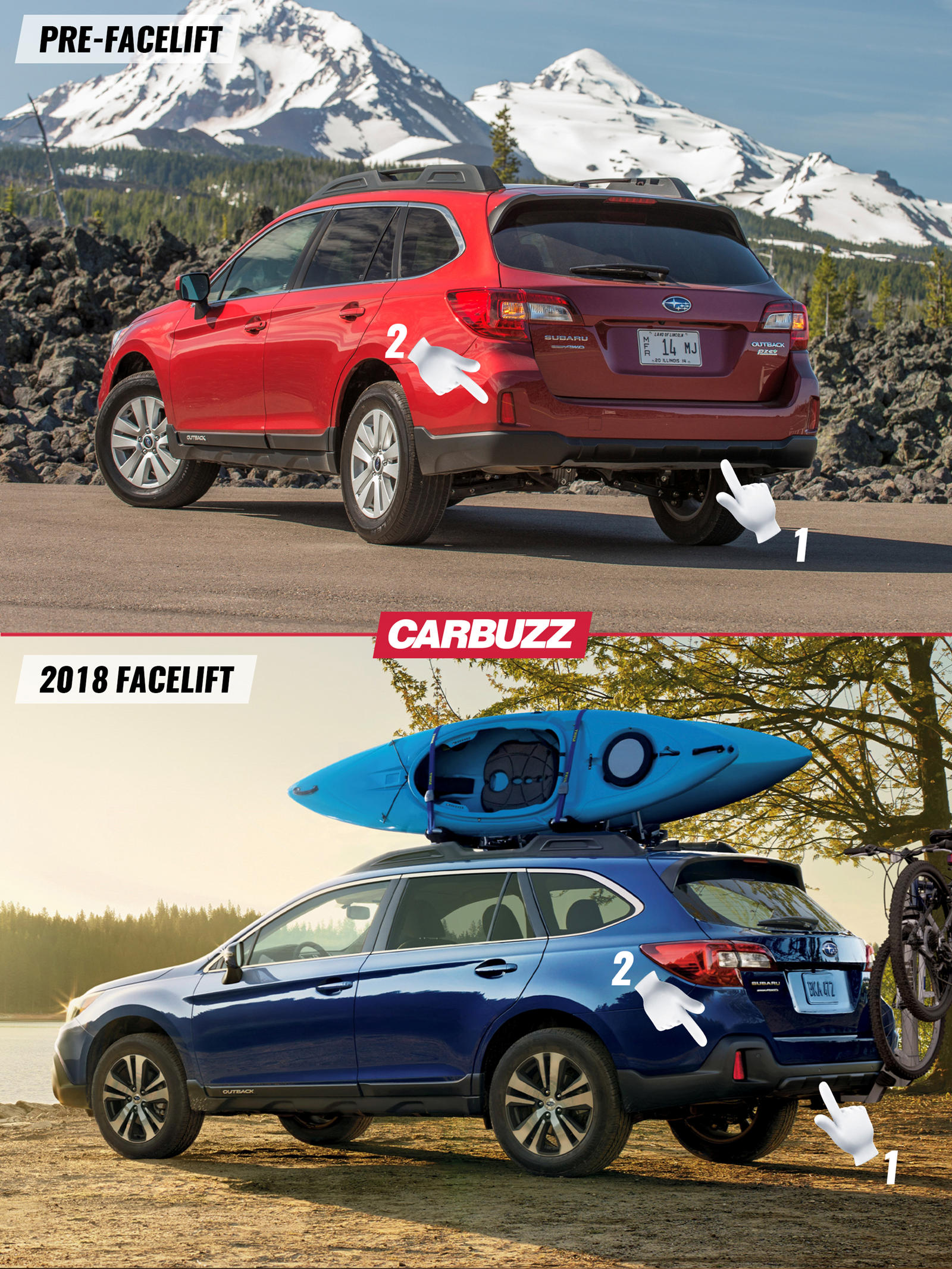 The rear received fewer changes, retaining the old sheet metal and rear lights. The bumper is new though, with the black rear valance mirroring the front one, reaching up into the bumper on either side of the tailgate and no longer running evenly along the lower edge of the bumper 1. At the front, these slots contain the fog lights and at the rear they contain the upright rear reflectors 2. 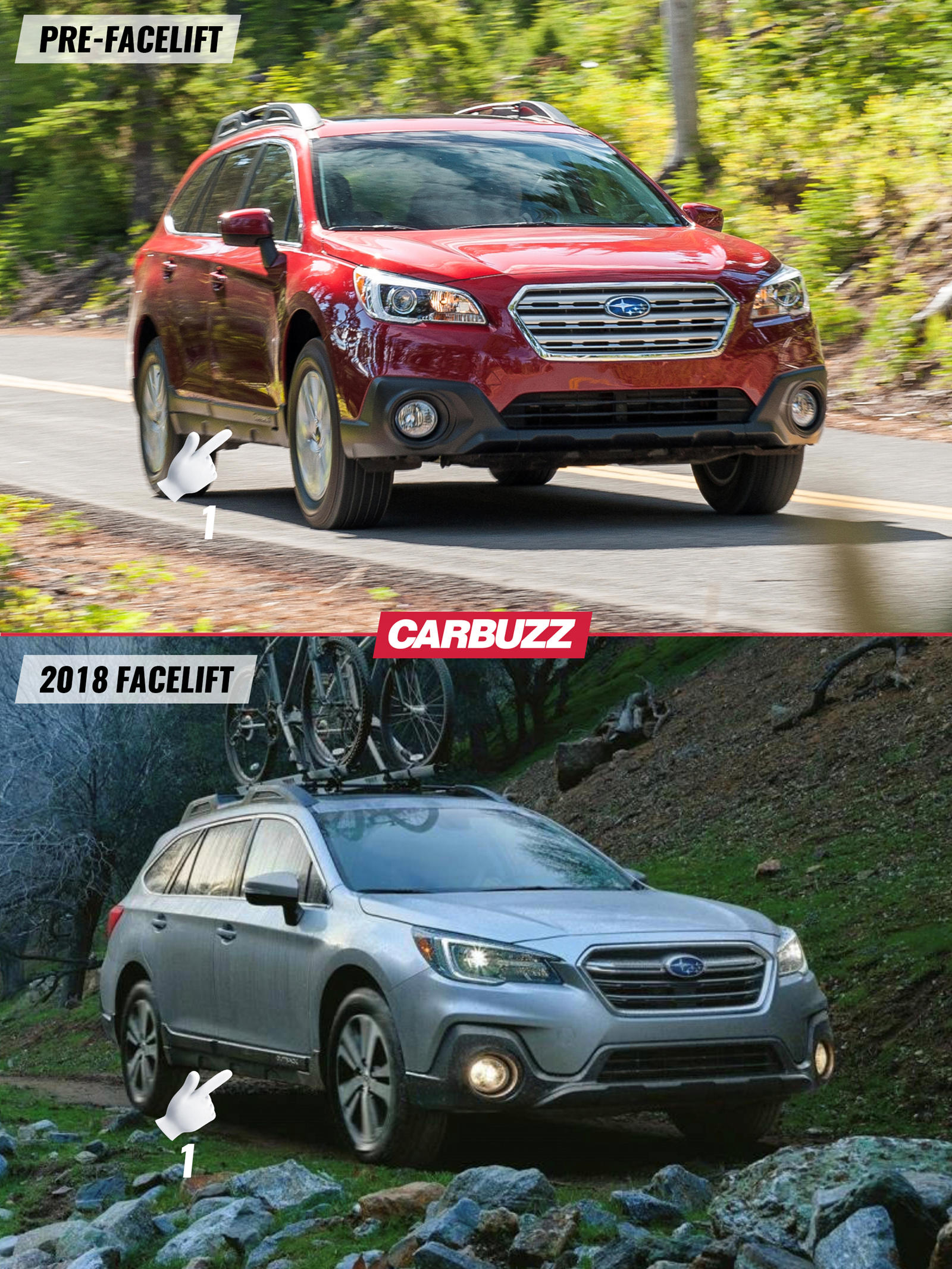 Besides the obligatory new wheel designs that accompany a facelift, the profile looks the same, save for the revised bumpers with their new lower valances that can also be seen from the side 1. 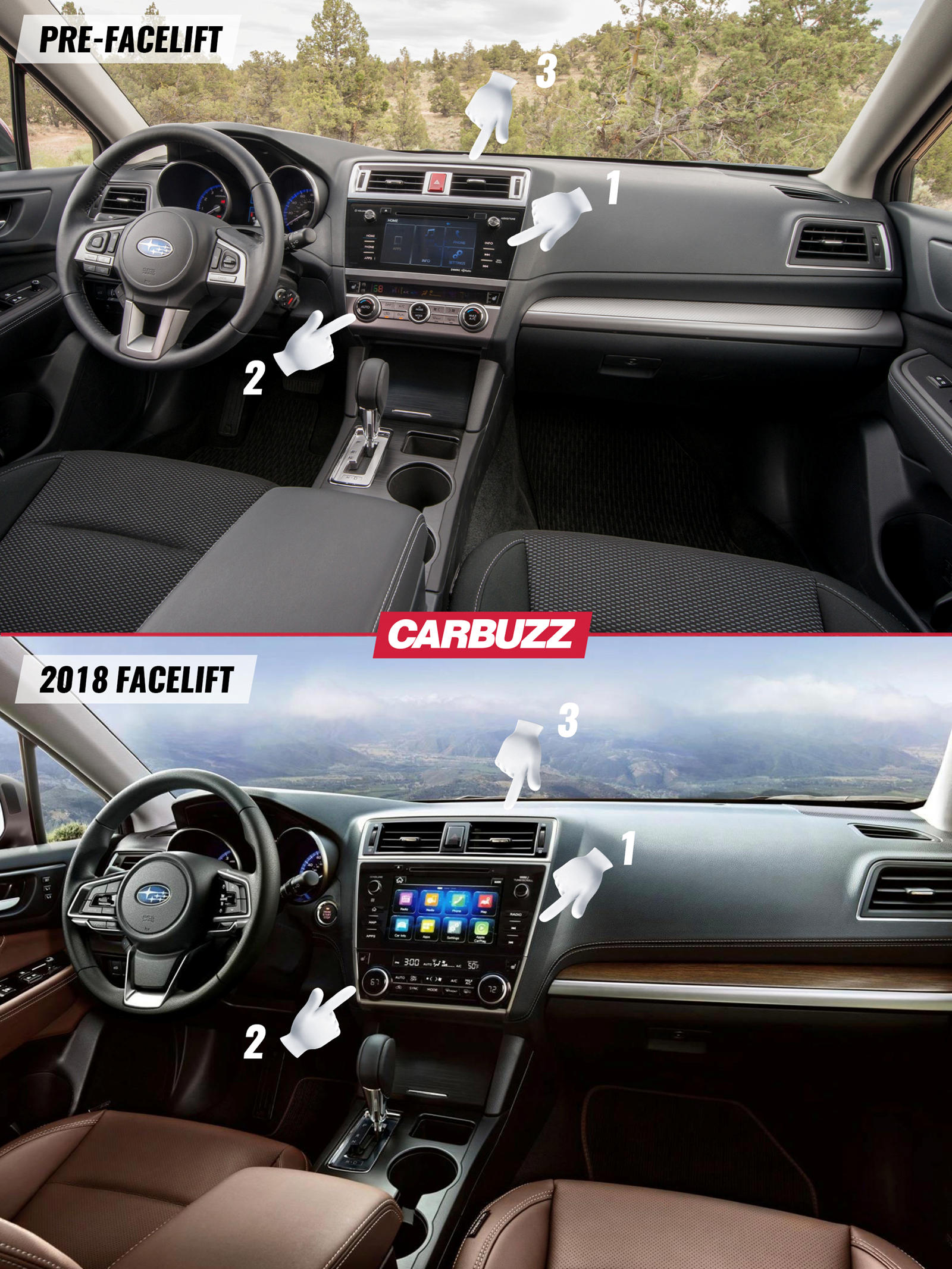 The interior received a freshening that is subtle but noticeable. The most obvious changes are to the center stack. The top half receives a new infotainment interface with a larger screen and revised buttons 1. The lower half is no longer layered in dark and silver plastic, but is uniformly black and contains a completely redesigned climate control interface, with two large round knobs on either side and buttons between them, whereas the previous silver panel had three smaller round knobs 2. The entire center control stack is black and now gains a silver border, also applied around the two center air vents, which are now larger 3.

The 5th-gen Subaru Outback had the same two engine options for its entire production run. The base engine is a 2.5-liter naturally aspirated FB25 flat-four with 175 hp and 174 lb-ft of torque, driving all four wheels via Subaru's symmetrical permanent all-wheel-drive system. The 0-60-mph sprint is dispatched in around 9.1 - 9.6 seconds. The other engine option is a far more potent 3.6-liter naturally aspirated EZ36D flat-six with 256 hp and 247 lb-ft of torque, capable of completing the benchmark sprint in around seven seconds. Both engines are exclusively mated to a Lineartronic continuously variable transmission (CVT).

Luckily, the 5th gen Outback was popular in America and there is plenty of user-submitted data. These figures show one thing clearly: that the 2.5-liter engine never achieves its claims in practice and that the 3.6-liter always beats its claims. It seems that owners are driving the underpowered 2.5 hard to make headway, while the six-cylinder is operating well within the ambit of its abilities more of the time.

The fifth-generation Subaru Outback BS has had a sound reputation for safety from the day it was launched. The NHTSA awarded the 2015 model an overall rating of five stars, made up of five stars for the frontal and side crash tests and four stars for the rollover test. The Outback received these exact same scores for all five model years. The IIHS awarded the 2015 Outback its top score for all its crash tests, as well as the Top Safety Pick+ award - the agency's highest accolade. Again, the Outback retained these scores for all model years, putting it in the top tier of safest cars on US roads.

Standard safety equipment on the base 2015 Outback includes ABS brakes, stability and traction control, eight airbags, active front headrests, automatic headlights, tire pressure monitoring, and a backup camera. All trims except the base car have access to EyeSight driver-assistance systems, such as pedestrian detection, forward-collision warning with automatic emergency braking, sway warning, adaptive cruise control, and lane-departure warning. For 2016, lane-keeping assist was added to the EyeSight suite. The 2016 Limited received standard blind-spot monitoring and rear cross-traffic alert. Automatic high beams and automatic reverse emergency braking are added to the EyeSight suite for 2017, as well as a top Touring trim that gets all the safety features as standard. Adaptive LED headlights with high-beam assist became available for the 2018 model. The final 2019 model year saw the biggest safety upgrade, with the previously optional EyeSight driver-assistance suite becoming standard equipment on all trims, with additional equipment - and auto-dimming interior mirror with HomeLink and a compass - added to Premium and Limited trims.

The fifth-gen Outback trims are relatively straightforward, with Base, Premium, and Limited trims for the 2015 four-cylinder models and the 3.6 only available in Limited. The 2017 model year saw the addition of a top Touring trim, available with either engine, and this is how the lineup remained for the rest of the production run. For all years up to 2018, the Base trim lost out not only due to fewer standard features but also because various extras weren't available on it, notably safety features. 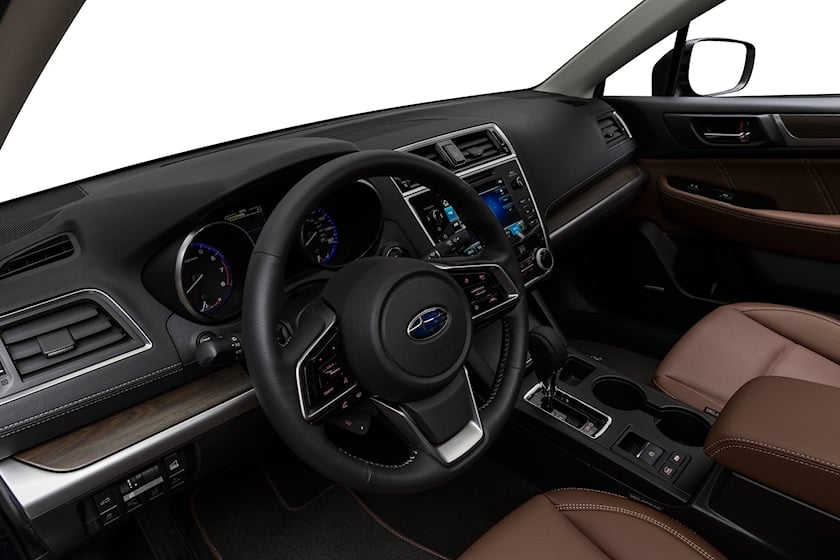 The interior of the Outback is spacious for a wagon and with more than 38 inches or rear legroom, nearly 39 inches of rear headroom, and a full 35.5 cubic feet of cargo space on offer, it offers lots of room for people and things. It's not as roomy as some proper crossovers, but it has more than enough space for a growing family and everything is screwed together tightly. It's not really upmarket, but it's pleasingly solid. Subaru does its best to make the most of what's on offer by providing leather as standard on both top trims; in fact, the Touring has sumptuous Java Brown leather trim, which does quite a lot to lift the interior and drive Subaru's luxury aspirations home. So too do the satin-silver highlights on the dashboard and steering wheel and welcome touches such as the rear-seat ventilation vents.

The Outback's engines are generally durable and it seems that the days of the EJ engines with their gasket issues and cambelt replacements are gone for good. The FB and EZ engines have chain drives for the valvegear and the gaskets hold up, so no problems there. However, they tend to leak oil as they age and the six-cylinder engine does experience the occasional issue with its cam-chain and serpentine-belt tensioners, while the four-cylinder may have an unhealthy appetite for oil if you drew the short end of the straw. However, Subaru has a reputation for troublesome transmissions, especially the CVT, which is the only one available on all fifth-generation Outbacks. The 2015 models are best avoided, but Subaru did extend the warranty on models with problematic CVTs and most of the issues should have been addressed by now. The CVT should not jerk, shudder, or hesitate.

A lubrication service where the engine oil and filter are replaced and the tires rotated is due every 6,000 miles. The cabin's air filter should be replaced every 12,000 miles, the engine's air filter and the brake fluid every 30,000 miles, the spark plugs every 60,000 miles, and the fuel filter every 72,000 miles. Subaru does not prescribe an interval for the replacement of the CVT's oil and stipulates that it should only be inspected every 30,000 miles. It prescribes transmission oil changes only for severe use, such as towing. There is no dipstick to check the oil level for yourself. Fastidious owners prefer to replace the oil from time to time and every 60,000 miles is a good call. Be sure to use a professional that uses the correct oil and knows how to do the job - or have it done by a Subaru dealership.

The Outback is generally durable, but the early CVTs proved troublesome, although most of these are covered by an extended warranty. Nothing major goes wrong with the engines, but about four to seven percent of FB25 engines exhibit excessive oil consumption, which is around one in 20. It's more an irritant than a problem and does not affect the performance or normal operation of the engine, but it can spell trouble if it's excessive and the oil level runs dangerously low, which can lead to engine failure. The EZ36D does not seem to suffer from this malady, but a faulty cam-chain tensioner can rear its head and should be attended to before the chain becomes damaged or before it fails completely and causes engine damage. Other than that, it's only really the EZ36D's auxiliary belt drive (again the tensioner) that can cause trouble. If it fails, the alternator stops working, forcing you to stop. This is just as well, because the water pump stops as well and the engine would overheat if you continued driving.

Besides these and a few other more common problems, there are also a few minor problems that do crop up from time to time and do not warrant their own sections in this review; we list them here:

The 2015 Subaru Outback was by far the worst in terms of problems and although many of these should have been fixed under warranty or recall, we'd avoid it because the first year of a new model is usually the most problematic anyway and production quality improves on later years. Also, keep in mind that pre-facelift models never had Apple CarPlay and Android Auto and were sometimes criticized for their stiff ride quality. In terms of the trims, we'd avoid the four-cylinder engine altogether. It is underpowered and in the real world, this means that its fuel-economy advantage is watered down because it has to be driven hard to deliver its best. We'd also avoid the base trim, which is not only worse equipped but has access to fewer upgrades and options as well.

If the budget stretched that far, we'd go for a facelift 2018+ Outback with its improved appearance and suspension. The 2019 model with its standard EyeSight driver-assistance suite is best, but this was optional on 2018 models, so a 2018 model so equipped is just as safe. We wouldn't hesitate to go for the six-cylinder either, because, in the real world, its fuel economy is better than the EPA claims and not that far off the four-cylinder's. Yet, it offers a lot more power, as well as a nicer sound and better refinement. The facelift Outback also has smartphone integration as standard.

With a few persistent issues and too many recalls, the fifth-generation Outback is not the last word in Subaru reliability but if you avoid the 2015 model and opt for a car with a full service history and all its warranty and recall work done, you'll have a solid wagon that can go many places cars cannot, without it handling like a truck. It really does offer an excellent compromise and should last a long time if properly taken care of - just don't skimp on the maintenance and remember that engine work is often expensive because of the inaccessibility of the horizontally opposed engine.