The Toyota Prius XW30 has been facelifted once during its lifetime, in 2012, with changes extending to all-new light units fore and aft, and the debut of the Toyota Entune subscription-based infotainment system. 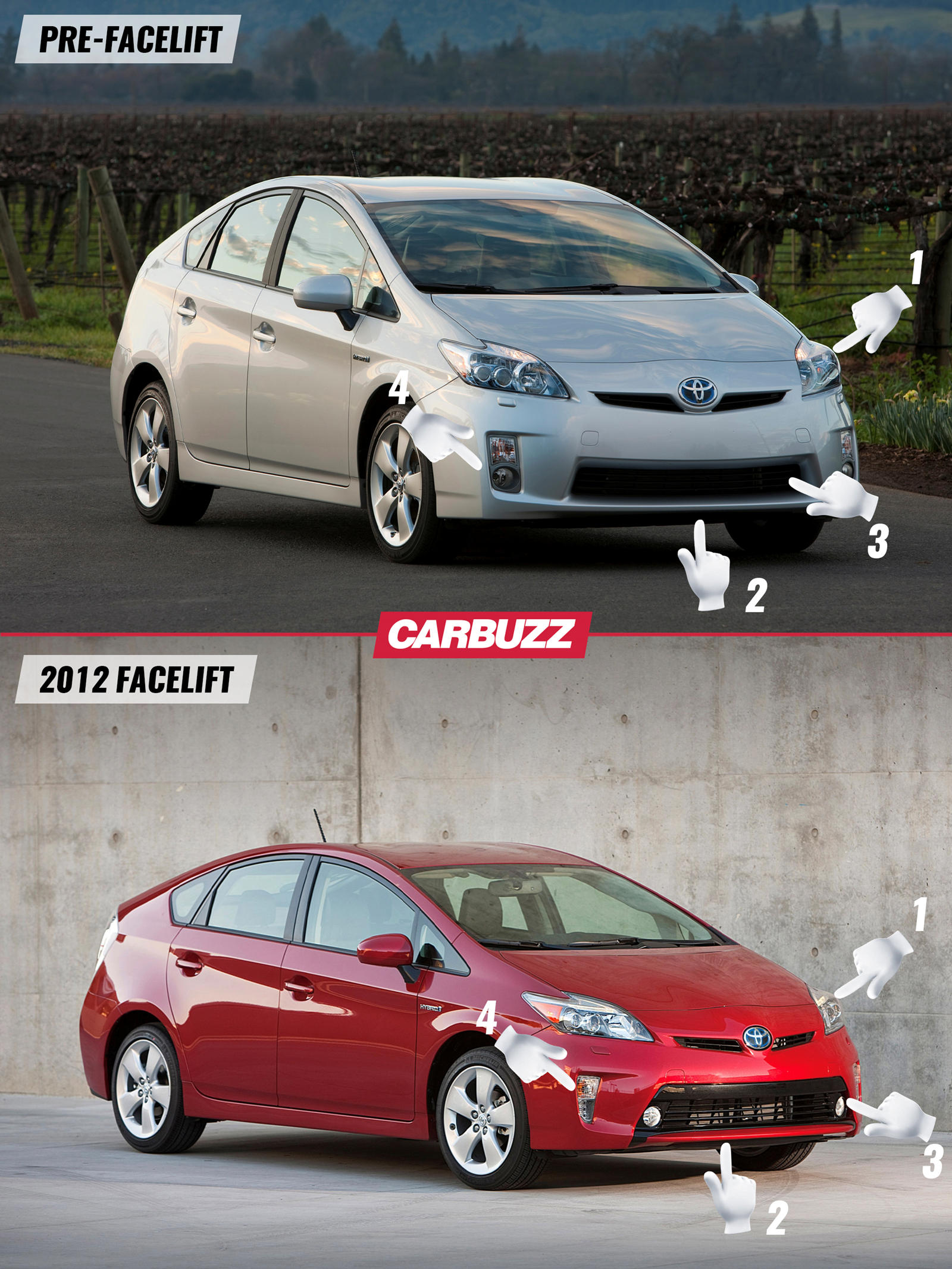 The 2012 Prius boasts all-new headlight clusters with new lenses and projector units within the same overall shape as before 1. The front bumper is all-new 2, with a far more aggressive lower fascia and air intake, now containing the fog lights on models so equipped 3. The upright slots on either side of the bumper that used to contain the fog lights lose their rectangular shape and taper towards the bottom 4. 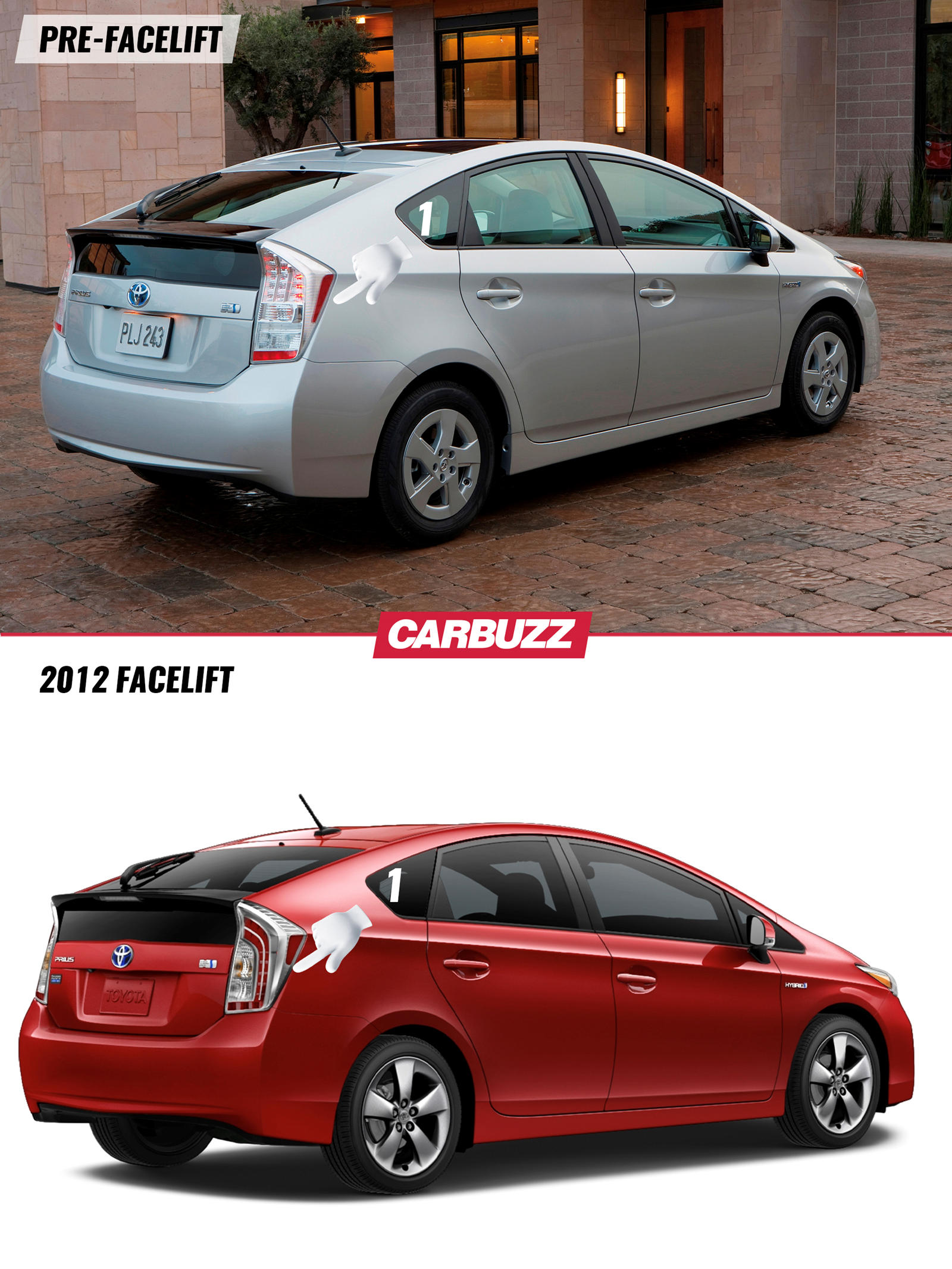 At the rear, the only noticeable difference is the redesigned taillights that retain their original shape but gain new lenses and swoopy C-shaped LED elements 1. 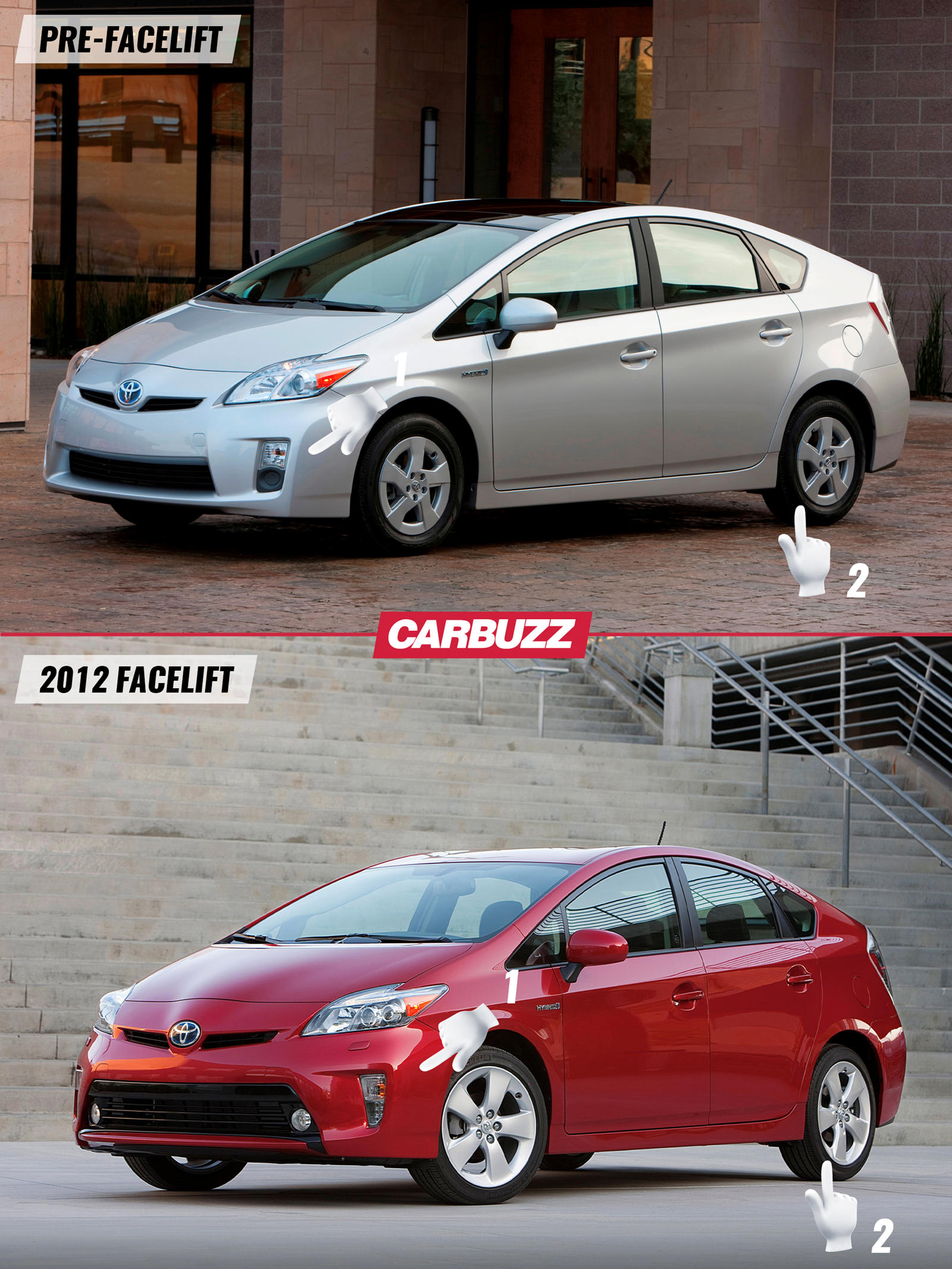 Only the eagle-eyed will be able to spot the revised front bumper treatment from the side 1, but the new 15-inch wheel covers on the Prius 2 are obvious 2. They have thinner spokes that actually expose a lot more of the ugly steel wheel underneath and can be seen as a step back from the old units that more closely resembled alloy wheels. Otherwise, the profile remains mostly unchanged. 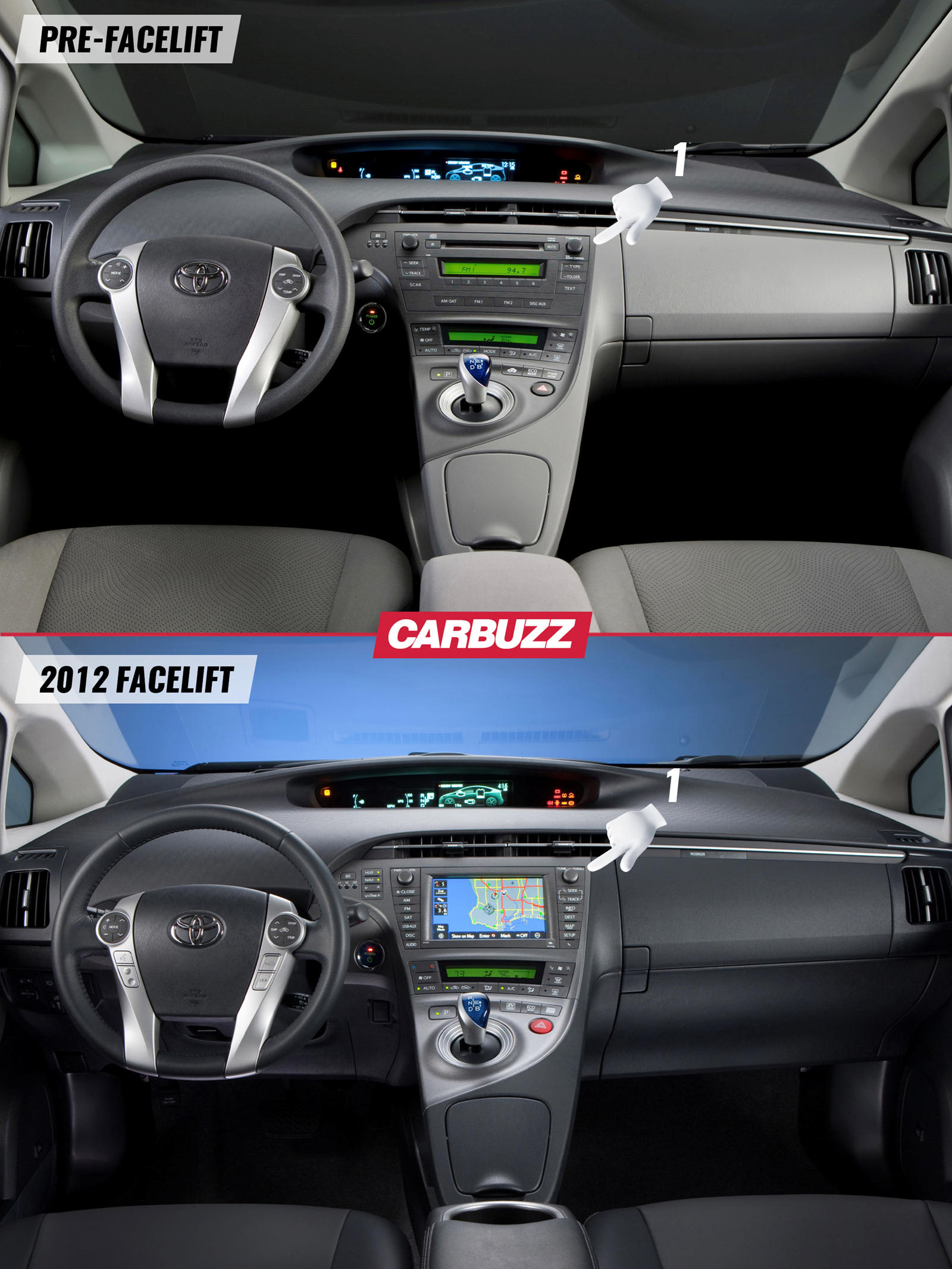 The overall style of the interior remains the same and even the steering wheel designs are retained. However, a variety of new audio head units are available 1, including the debut of Toyota's new subscription-based Entune infotainment system.

From the day it was launched to the day it was discontinued, the 3rd-generation Toyota Prius has only ever been offered with one drivetrain. The gas engine is an Atkinson-cycle 1.8-liter 2ZR-FXE unit with 98 hp and 105 lb-ft of torque. It is aided by a permanent magnet synchronous electric motor developing 80 hp and 153 lb-ft of torque. As their power and torque peaks do not coincide, the total hybrid system output is 134 hp. The drivetrain is connected to a continuously variable transmission (CVT) that drives the front wheels. The hybrid battery pack is a 1.3-kWh nickel-metal hydride unit. The Prius takes around 10.1-10.2 seconds to reach 60 mph from a stop.

Official EPA estimates have varied slightly over the five production years of the Toyota Prius gen 3 but they never drop below 49/46/48 MPG for the city/highway/combined cycles. Though EPA estimates can sometimes be optimistic, consumer reports show almost identical, if not superior, figures.

When the Toyota Prius third-generation launched as a 2010 model, the NHTSA still evaluated cars against the old, outdated pre-2011 standards, so only 2011 or newer ratings are worth noting. The Prius does well, with a five-star overall crash rating, made up of four-star ratings for the frontal crash and rollover test and five stars for the side crash. Due to more stringent newer standards, the 2014 Prius loses a star on its overall rating, which doesn't improve on the 2015 model. Over at the IIHS, the 2010 Prius receives "Good" scores across the board. The roof-strength test added for the 2011 model returns a "Good" score as well, netting it a 2011 Top Safety Pick award. It continues for the 2012 and 2013 models, while the 2014 and 2015 Toyota Prius boasts a Top Safety Pick+ award.

Even the base Prius 1 trim gets plenty of safety equipment. The 2010 baseliner comes standard with ABS, stability and traction control, and seven airbags, not to mention the decent crash ratings. Pre-collision and lane-departure warning systems are available optionally, so check if any of these are specified on a used Prius you're looking at. Nothing changed on the safety front until the final 2015 model year when all Prius trims received a standard backup camera.

The Prius trim lineup is quite simple and straightforward, comprising five trims: Prius 1 through Prius 5. Prius 1 wasn't a permanent fixture though, with the lineup kicking off with the 2010 Prius 2. The Prius 1 was added at the bottom of the lineup late in the 2010 model year and remained on sale for 2011, only to disappear for the rest of the production run. 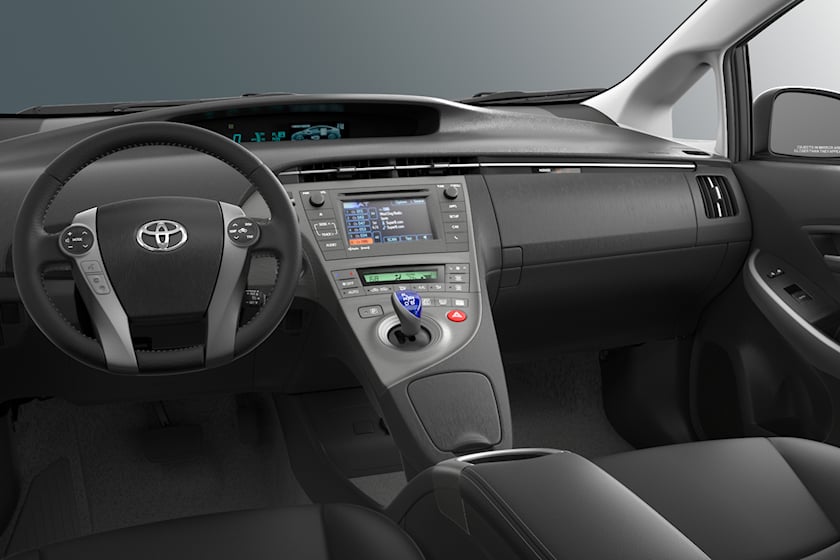 The 3rd generation Toyota Prius' interior has an attractive and modern design, but the materials aren't upmarket. Unfortunately, this doesn't improve further in the production run, although top-tier models with all the advanced electronic options fitted and the leatherette upholstery do look better inside, if not plush. The rear legroom of 36 inches, along with the spacious 21.6-cubic-feet trunk, are impressive for what is essentially a compact car. What is less impressive is the 37.6 inches of rear headroom, which will see tall passengers' scalps grazing the headlining.

The trims are straightforward, but the Prius 1 joined the lineup late in the 2010 model year, so some sources don't even list it as a 2010 trim. It was discontinued soon after. The Prius Persona Edition adds a cosmetic package to the Prius 3 and is available for two model years only: 2013 and 2015.

There are 3rd gen Prius models out there with many miles on the clock, they are not nearly as reliable as their predecessors, and earning bad marks for problematic brakes, piston rings, and hybrid-drive inverters. In fact, there were so many complaints about the 2010 model that it should be avoided altogether. The same applies to a lesser extent to the 2011 and 2012 models. That said, with the problems fixed and the recall work done, the Prius is a solid car that can last many years.

The basic oil service should be performed every 10,000 miles, but we always recommend halving that distance if you use your Prius in harsh conditions, such as in freezing temperatures, in dusty environments, or if you typically idle a lot. The first few services typically only entail the replacement of the engine oil and filter, as well as the cleaning of the cabin air filter, the rotation of the tires, and the inspection of the brakes and ensuring that the driver's floor mat is properly secured - a legacy of ill-fitting floor mats and defective accelerator pedals being responsible for millions of Toyota being recalled for unintended acceleration. At 30,000 miles, the cabin and engine air filters are replaced and a lot more systems and subsystems are inspected. At 120,000-mile intervals, the spark plugs must be replaced. Keep in mind that the nickel-metal hydride hybrid battery pack is guaranteed for 100,000 miles or eight years and that it will start to deteriorate after that time. A new battery pack will cost between $2,200 and $4,100 and a refurbished or used one at least $1,500.

Unfortunately, the 3rd gen Toyota Prius is a clear step back from its predecessor in terms of reliability and it has experienced various problems with both its internal combustion engine and hybrid system. In the quest for efficiency, the low-tension piston rings used on the 2ZR-FXE engine are notorious for getting clogged and stuck, causing oil consumption to soar. Because of Toyota's selective warranty conditions, it isn't a given that an owner would have this problem corrected while under warranty either.

The hybrid system cause problems, too, with many faulty inverters replaced under warranty. These are the expensive, big-ticket items, but there are myriad other smaller problems too, affecting the headlights and braking system, among others. Cared for properly and with all the major issues attended to, a 3rd generation Prius can exceed 200,000 miles, but there might be a few bumps in the road getting there. As always, meticulous maintenance helps and frequent oil changes are a must. If the CVT frequently gets clean oil, 2010, 2011, 2013, 2014, and 2015 Toyota Prius transmission problems are quite rare. Unlike some Toyotas, 2010-2015 Toyota Prius radio problems and Bluetooth echoes are not common either; similarly, Toyota Prius sunroof, power window, and driving problems are not often reported.

We dedicated a section below to each of the major problems, but some are not as serious, commonplace, or costly to fix, so we mention them here:

It's worth keeping in mind a few common error codes:

The 3rd generation Prius is beset by some persistent problems, for which Toyota has had to recall various years. The first years are by far the worst and problems dramatically decrease for later model years.

In the case of the XW30 Prius, the earlier, the worse. In fact, so numerous were the problems in the first model years that we would recommend avoiding all 2010-2012 models like the plague and only start considering a clean 2013 model. Many of the problems might have been sorted out under warranty or recall, but some big-ticket items such as the engine (oil consumption) and hybrid system (inverter failure) affect later models to a lesser extent. Avoid the barebones steel-wheeled Prius 1, as well as the 2, which is only slightly better.

As for the trim level, we wouldn't consider anything less than the Prius 3 with its upgraded infotainment and access to additional packages, such as the Solar Roof package and Navigation package, so check whether any of these have been fitted. The Prius 4 is even better equipped, but only really adds improved seating with leatherette surfaces and electrical adjustment. Since the interior is rather low-rent, try to find a Prius 5 at a good price, because it is the best-appointed, gets the LED headlights that never cause any problems, and runs on the nice big wheels, even if this does impact economy slightly. A 2014 or 2015 model should do nicely and should have most of its problems sorted out.

A meticulously maintained XW30 Prius with all its recall work carried out and all the necessary repairs done can provide you with years of reliable service. However, a full maintenance record is critical and the later the year, the better to avoid expensive problems. It does not uphold the Toyota reputation for reliability, but its reliable predecessor is neither as attractive nor as safe as the third-generation car, so we're loathe to recommend the gen 2 car for those reasons. The gen 3 can be an extremely economical and cost-effective compact car with a surprising amount of interior space - limited rear headroom notwithstanding - as long as you tread carefully and don't lose everything that you have managed to save on low running costs on expensive repairs. To avoid the pitfalls, take heed of all the warnings in this Toyota Prius 3rd generation review. As always, buyer beware.