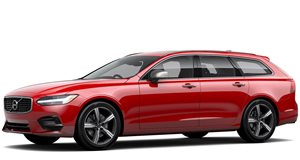 While there may only be one engine available to the V90, it can be configured in one of two ways. In the standard T5 configuration, the turbocharged four-cylinder develops 250 hp and 258 lb-ft for the front wheels, giving the wagon pretty modest performance. It accelerates relatively well, but it lacks the kick of V6-powered rivals. To make up for this, the engine is available in the T6 configuration, which sees a supercharger added to the standard turbocharger, increasing output to 316 hp and 295 lb-ft. The eight-speed automatic gearbox remains unchanged, but the drivetrain is swapped out for an all-wheel variant. In this stronger guise, the V90 is quite a bit quicker, even with the added weight of the T6 powertrain and AWD. While it can't quite compete with the likes of the Mercedes-Benz E-Class Wagon, the Volvo still gets a respectable 0-60 mph sprint time of under six seconds, if only just.

In its standard T5 configuration, the 2.0-liter turbocharged four-cylinder engine comes mated to an eight-speed automatic gearbox that directs the 250 hp and 258 lb-ft to the front wheels only. This gives the wagon enough power to get around town, but it doesn't feel quite strong enough to deliver the kind of fun that the V90's impressive handling could deliver. For that extra bit of oomph, you'll need to trade up to the T6 configuration. In this guise, the four-cylinder engine adds a supercharger to develop 316 hp and 295 lb-ft for all four wheels. This more potent set-up makes the V90 feel far more energetic, despite the extra weight. Merging and passing on the highway is a lot easier with the T6 powertrain, and getting around town feels effortless. In either configuration, the V90 gets an Aisin-sourced eight-speed automatic gearbox. While there may be the occasional clumsy gear shift, the transmission is generally smooth, especially during acceleration. The stop-start function on the engine can be a bit lazy, though.

By sticking with a four-cylinder engine, albeit a turbocharged one, instead of the larger V6s or V8s found in some rivals, the Volvo V90 is able to boast pretty attractive fuel consumption figures. With the slightly lower-output T5 powertrain, the wagon gets an EPA-estimated 22/33/26 mpg across the city/highway/combined cycles. Swapping to the T6 engine and its all-wheel drivetrain sees these figures take a bit of a hit, dropping to 21/31/25 mpg. To make up for this, the T6 gets a larger 15.9-gallon tank, as opposed to the T5's 14.5-gallon tank. Thanks to this, there is very little difference between each powertrain's estimated range, with the T6 getting around 398 miles to a tank, while the T5 gets around 377 miles.

Offbeat
Hyundai Has Turned Its Image Around