In a facility, so secret, only museum curators are allowed to enter it frequently.

Porsche has developed a reputation for producing some of the best sports cars the world has ever seen. Its expertise ranges from the road to track dominance, with racing titles won including rallies, Group C, endurance races, and everything in between. Its on-road exploits aren't without substantial credo either – refusing to conform to the standard set by others, bettering others with its unusual engineering makes them truly unique. No other pinnacle performance car manufacturer hangs the engine of its most important model behind the back axle.

Until 1998, Porsche still relied on air cooling for that same vehicle; and yet the Porsche 911 is still the benchmark sports car – the measure against which all others are compared, and often fall short.

One might imagine that with an illustrious 70-year history or road and track successes, Porsche might have a substantial amount of special machinery stored away. It does indeed, and while a large portion of its history is available for public viewing at the Porsche museum, it's the secret warehouse in Zuffenhausen that holds even more history.

Of the 500+ vehicles in Porsche's collection, only 85 or so can be displayed in the museum at any given time. The rest find a home in this rather special place – one devoid of signage and one so secret that only museum curators are regularly allowed to enter. We've picked just ten of our favorites from the secret collection to share with you.

I'd wager you've likely never heard of the Porsche 964 Boxster. After all, the 964 was the numerical code denominating one of the most famous generations of Porsche 911 ever. But while other manufacturers make use of camouflage cladding and faux body panels to hide the development of new models from prying eyes, Porsche developed the original Boxster in total secret by housing the mid-engined running gear in the body of a 964 Cabrio. This development prototype now lives in Porsche's private collection – the road-going mid-engined 911 many have dreamed of.

Nowadays almost every manufacturer has tried its hand at Formula 1 in some capacity – over the last two decades, everyone from Renault to Jaguar has been involved, with Ferrari, McLaren, Mercedes, and Alfa Romeo all taking part too. Porsche, however, has been somewhat of an absentee, though this wasn't always the case. Ferdinand Porsche originally had a hand in penning Mercedes and Auto Union F1 designs, and the company raced its own cars in the 1960s.

It returned to Formula 1 in the 1980s, which is where this gem of a race car hails from. Due to Porsche's turbocharging successes, it linked up with McLaren, supplying turbocharged 1.5-liter V6 engines for the McLaren MP4/2C race car. Piloted by F1 legends Alain Prost and Niki Lauda, the MP4/2C enjoyed much success, including three drivers' and two manufacturer championship titles. Porsche keeps the race car clean and in working order for displays and revival events.

These days, the second generation Porsche Panamera has evolved into a rather impressively stylish sedan and wagon, despite the first generation being a bit of an ugly duckling. Regardless of our opinions on its styling, though, the Panamera has always been highly competent. However, the idea behind the Panamera goes back many years before the first generation ever debuted. Back in 1988, Porsche toyed with the 989 Concept – a 4-door performance orientated sedan that was canceled in 1992.

The 989's styling is highly reminiscent of a 4-door 996-gen 911, which arguably makes it more stylish than the other Porsche sedan concepts hidden away in the warehouse. But the 996-inspired styling is made more interesting by the fact that the 996 generation 911 only debuted six years after the 989 was canceled, in 1997. It just goes to show how forward-thinking Porsche's design team was.

In the early 1980s, Porsche was eager to produce a successor to the 959 and looked to its new 964-generation 911 platform upon which to build it. The 965 – the internal code for it – was effectively set to be an all-wheel-drive hyper-911 with twin-turbos and a PDK transmission. The original 3.3-liter flat-six didn't work due to cooling problems, and Porsche worked through several alternatives, including using the Indy V8 engine. The only remaining prototype lurking about (pictured) featured a V8 engine sourced from corporate stablemate, Audi. Nothing ever really took off though, and the idea was canned. Running prototypes were produced, but only this one remains, living in Porsche's secret warehouse, with hybrid bodywork from both the 911 and 959.

Long before Porsche jumped in with McLaren to supply engines, it went into Formula 1 as a standalone constructor. In the early 1960s, Porsche upgraded its 718 Formula 2 race car for competition in F1, unsuccessfully. In 1962, it entered the new 804 race car, equipped with an air-cooled flat-8 engine. However, unlike the 718, which was hugely successful, against the Sharknose Ferraris and monocoque Lotus cars, the Type 753 struggled in motorsport's top tier. In Formula 1, the 753 racked up just one championship win for Porsche as a chassis manufacturer, with Dan Gurney at the wheel in the 1962 French Grand Prix.

Porsche doesn't like convertibles. Despite its commitment to the 'wrong' engine placement in the 911, the company caters to purists who much prefer the rigid, lighter weight construction of hard-top coupes for its sports cars. But there was a time when a TV star by the name of Tom Selleck needed a convertible sports car for a new TV show he was starring in. Porsche built a 928 convertible for Selleck but decided after that it didn't like it and the relationship ended there. The starring automotive role was filled by the Ferrari 308 – making it a cult classic in the process. Though many aftermarket specialists offer convertible conversions for the 928, the only Porsche factory-made 928 Cabrio sits in Porsche's warehouse.

The Dutchman responsible for designing the Porsche 924, several 911s, BMW Z1, and the Carrera GT, was also the man behind the Porsche Panamericana concept. The Panamericana was designed as a gift for Ferry Porsche's 80th birthday and served as an initial testbed for design features that would appear on the 993 generation 911.

The uniquely styled convertible debuted for public viewing at the 1989 Frankfurt Motor Show, built on the chassis of a 964 Carrera 4 Cabriolet using plastic and carbon fiber body panels. What made the Panamericana highly unique though was the wide wheel covers, intended to enable switching the wheels and tires to those of a far larger size in order to make the Panamericana somewhat of an off-roader.

Did you know Porsche once built a motorbike? It was once, and only once, and was developed by a Porsche designer named Mr. Hess, taking the forks and other mechanical bits from a BMW motorcycle and equipping them to a specially designed frame capable of housing an engine from a Porsche 356. The idea never really took off, and the Hess-Porsche Single Track 356 sits in lone existence inside Porsche's warehouse – though the project did inspire many a privateer to build their own equivalents using the same basic formula.

You didn't think we could have a list of special Porsches without a 935, did you? In light of the recent unveiling of a new GT2 RS-based 935, the original warrants inclusion here. Built from 1976 to 1981, the 935 was a 911-based race car featuring bespoke aerodynamic bodywork and a unique, 3.3-liter type 935 twin-turbo flat-six engine from which its name was derived. In racing trim, these were known to produce anything up to 845 horsepower. The 935 raced in the FIA Group 5 category, where it absolutely dominated. But when the FIA restructured its racing divisions in 1982, the 935 was made redundant, replaced by the 959-based Porsche 961 race car. These Martini-liveried 935s are regular fixtures at Porsche's museum and, in their off-time, is housed in Porsche's warehouse.

A special version of the 928 was gifted to Ferry Porsche for his 75th birthday featuring an extended wheelbase to accommodate taller rear passengers. Dubbed the 942, it was three years later that the concept evolved into the "Study H50". The Study H50 was effectively a 928-derived wagon, featuring 4 doors – although the rears were not full-sized and opened in a suicide door fashion – and a station wagon roofline. The prototype was thought to be lost soon after it was unveiled, but when the Panamera launched two decades later, the H50 surfaced once again – having been hidden away in the warehouse all this time.

Though the original Panamera might have had ties to the H50, it seems the latest generation Panamera Sport Turismo is the vehicle whose roots can be traced back directly to the 928 Study H50 prototype. 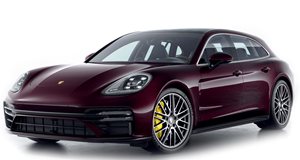