We can't state that the Camaro is better than the Mustang as fact though.

That rivalry has led to some insanely fast pony cars despite the Camaro taking a break from production after the 2002 model until bringing it back for the fifth generation in 2009. The Camaro has outsold the Mustang a few times through their history, including a five year period from 2010 through 2014. Now, 52 years later, the base model Camaro starts at $25,000 and you can get blistering world-class power and performance with the ZL1 model with the 1LE performance package for a little over $70,000.

It Wasn’t Called The Panther

Chevy actually went as far as preparing the badging with the car's development codename of Panther. However, the name was changed at the last minute. According to sources at the time, the name was actually found by Chevy designers in Heath's French and English Dictionary and translates as 'comrade.' Chevy representatives threw down some smack talk though and told the press it means "a small, vicious animal that eats Mustangs."

To announce the Camaro, Chevy's PR team gathered with selected media at hotels across 14 American cities to create the world's first mass teleconference. It was an achievement that needed 100 technicians from the Bell communications company to make sure the call took place smoothly.

Z/28 is the obscure order code you had to use to order the SCAA spec Camaro intended as competition for the race legal Mustang. However, according to legend, Chevy's boss Pete Estes disliked anything that wasn't a convertible so one of the Camaro team ordered a convertible Z/28 to be made. Estes loved it and the Z/28 moved into production, but it was almost 20 years before a Z/28 soft-top became an option for customers.

The 427 cubic-inch engine wasn't on the order sheets or part of a package option you could tick. You needed to know it existed and who to call for a Central Office Production Order and it cost just about double the price of a normal Camaro. Now, it's one of the most sought after and valuable Camaro options in the collector market.

IROC-Z is Not Just a Cool Sounding Name

IROC stands for the International Race Of Champions and was a race series that ran from 1973 to 2006, barring a hiatus from 1981-1983. The idea was to put the best drivers from other racing series into identical cars on different race tracks in order to sort out the best from the best. The series initially used the Porsche RSR, but, after the first year, the championship switched to use Chevy's Camaro until 1989. A single team of mechanics prepared each car so they were the same and the field of drivers was kept between 6 and 12 per series.

Right up to the point of release, the first generation Camaro nearly had a station wagon option. The idea was revived for the second generation but didn't make the cut. We can't decide if that would have been a cool Camaro or a horrible watering down of the pony car.

Inspired by a Ferrari

If you squint your eyes, you can see how styling of the second generation of Camaro was inspired by the Ferrari Lusso 250 GT. GM like the idea of a "European grand-touring aesthetic" for the body, and it paid off.

The first 4-cylinder engine in a Camaro isn't the recent turbocharged lump. The 1982 Sport Coupe came standard with a 151 cubic-inch 4-cylinder making just 90 horsepower. It accounted for 21,802 of 189,747 Camaros sold in that year.

The Camaro got its first LS engine in 1998 when the LT1 Gen II small-block was swapped for the all-aluminum LS1. It was rated at 305 horsepower and could be had with either a 6-speed manual or a 4-speed automatic transmission.

Not All Camaros Had Z/28 Stripes

When you see first-generation Camaros rocking SS badges and the two Z/28 stripes running from front to back, they're probably just artistic license from the restoration. Only Z/28 models from 1967-1973 got the stripes other than the 1969 Indy 500 Pace Car replicas. The 1967-1969 Camaro SS model had its own stripe packages, but the 1970-1972 SS Camaro did not have stripes at all.

Neiman-Marcus is an American chain of luxury department stores, famed for exclusive special editions that can be ordered from them. The Neiman Marcus Camaro was a 2011 convertible model that came with special paint and ghost stripes and cost $75,000. It sold out in three minutes.

According to Hagarty, there are more than one-million collector cars insured in the U.S. The Corvette is the most popular collector's car, the Camaro is the third most popular and that makes the Mustang second, and the meat in a Chevy sandwich. 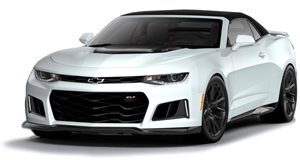