Contrary to popular belief, the CT4-V Blackwing is a sub-compact performance sedan.

Ever since Cadillac released its latest sedan models, the CT4 and CT5, there's been some confusion on what segments each competes in. We already took a look at the new CT5-V Blackwing, which rivals the BMW M3 and other similar cars such as the Audi RS5 Sportback and Mercedes-AMG C63. This is the territory where the ATS-V used to compete, not M5 territory like the CTS-V. So, where does that leave the 2022 Cadillac CT4-V Blackwing?

Cadillac markets the CT4 sedan as a sub-compact model, meaning it goes up against other entry-level models such as the Audi A3, BMW 2 Series Gran Coupe, and Mercedes-Benz CLA. Since there is no M2 Gran Coupe and the new RS3 hasn't been announced yet, we wanted to see how the CT4-V Blackwing stacks up against its closest performance-minded competitor, the 2021 Mercedes-AMG CLA 45.

The Cadillac CT4 is a uniquely-styled sedan from both the front and the back, thanks to its headlights and taillights that look unlike any other car on the market. Cadillac added more aggressive elements like a front splitter, side skirts, and a ducktail spoiler on the trunk for the Blackwing model. Perhaps even more so than the CT5-V Blackwing, the CT4-V Blackwing brings a youthful, sporty vibe that looks ready to tackle a race track.

By contrast, the CLA's AMG transformation is more subtle. Buyers can opt for a more aggressive spoiler and front canards, but the standard CLA 45 is pretty tame aside from the large wheels and Panamericana grille. These two sedans are proportioned very differently, with the Cadillac having rear-drive proportions and the Mercedes riding on a front-drive platform with a coupe-like side profile.

The Cadillac CT4 features a pretty spartan interior that feels like it could have a Chevrolet or Buick badge on the steering wheel. In Blackwing form, the cabin looks more premium with performance upgrades such as optional performance seats with carbon fiber backs, a performance steering wheel, and a new digital instrument cluster. Cadillac's infotainment lives on a small eight-inch infotainment system, but wireless Apple CarPlay and Android Auto are standard.

The Mercedes-AMG CLA clearly outshines the CT4 with interior design. Mercedes knows how to design a stunning cabin, highlighted by dual 12.3-inch screens and ambient lights on the air vents. Optionally, Mercedes also offers AMG sport seats to hold the driver and passenger in place.

Performance: RWD In An AWD World

The Cadillac CT4-V Blackwing has a major difference compared to any of its competitors; it only sends power to the rear wheels. In some respects, this can be seen as a disadvantage because the car isn't as practical in cold climates, and it can't get off the line as quickly as an all-wheel-drive car. However, sticking with rear-wheel-drive will likely make the Cadillac a more engaging driving experience than its competitors. It's also the only car in this competitive set to offer a six-speed manual transmission option. Cadillac has the enthusiast community on notice.

As for power, the CT4-V Blackwing blows away the competition with a twin-turbocharged 3.6-liter V6 producing 472 horsepower and 450 lb-ft of torque. The 2.0-liter four-cylinder turbo in the CLA 45 only produces 382 hp, and even the mightily Audi RS3 with its five-cylinder tops out at 394 hp. Only the two-door BMW M2 CS gets close with a twin-turbo inline-six producing 444 hp.

Cadillac says the CT4-V Blackwing takes just 3.8 seconds to hit 60 mph, which is only a tenth slower than the CT5-V Blackwing. The M2 CS will match this time, but the CLA 45 will be slightly behind, even with an AWD launch.

Looking at the CT4-V Blackwing's dimensions, it's a few inches longer than its rivals (2.4 inches more than the CLA), and it rides on a slightly enlarged wheelbase (around two inches longer) due to its RWD platform. Unfortunately, these superior exterior dimensions don't translate much into practicality. The CT4 offers 33.4 inches of rear legroom, which falls shy of the CLA's 33.9 inches. The rear headroom in the CT4 is much better because of the CLA's coupe-like roofline. As for trunk space, the CLA scores another win with 11.6 cubic feet of space compared to just 10.7 in the CT4.

Though the CT4-V Blackwing is longer than its key rivals, the interior dimensions bear out its sub-compact status. These measurements prove disastrous when compared to the larger compact class, with vehicles like the BMW 3 Series and Mercedes C-Class. These cars have wheelbases of 112.2 and 111.8 inches respectively, which are significantly stretched compared to the CT4 at 109.3 inches. Though the Cadillac is longer overall than the BMW and nearly the same as the Mercedes. With over 35 inches of legroom in the BMW and Mercedes, the Cadillac can't compete with these vehicles.

The 2022 CT4-V Blackwing comes with an interesting $59,990 starting price. That's only slightly more than the CLA 45, which costs $55,350 to start. With options, a CLA 45 can easily exceed $70,000, so it will be interesting to see what the Blackwing tops out at. Cadillac has not revealed full pricing yet, but the CT4-V Blackwing seems like a tremendous bargain for its power output.

This car has just one fewer horsepower than the new BMW M3 but costs $10,000 less. It has more power than an Audi RS5 Sportback and costs $15,000 less. Even the BMW M2 Competition, which produces much less power, only undercuts the CT4-V Blackwing by $1,000. Cadillac priced this car to have the German automakers worried. Some might say that the CT4-V is a playground bully looking to beat up on a much less powerful CLA 45, but perhaps, Caddy is just doing what it does best, bringing power to the masses at an affordable price. 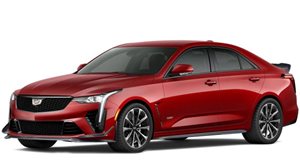 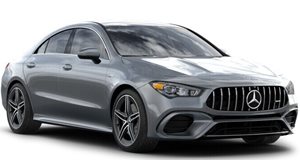