Chevy has made some good choices with the Bolt EUV.

Building an affordable car is all about compromise. Specifically, choosing where to compromise while maintaining a certain price point. The focus is on the target customer and what they perceive as important in a car for their lifestyle. If the target market values power and handling, then a spartan interior with few driver aids will be the compromise. If safety is the key, the best cost-based compromise for the expensive sensor system and software will be using a cheaper, less powerful engine to build.

Chevrolet's Bolt has been one of the best affordable electric vehicles for a while now, but the company has built on that with an SUV body style version. The 2022 Bolt EUV (Electric Utility Vehicle) rides a little higher, has a longer wheelbase, an EPA estimated range of 247 miles and a base price of $33,500 (less for the 2023 model). Chevy has made some solid choices in compromise to get to that price, and one we're not impressed by. During a week with the 2022 Bolt EUV, we were both delighted by the value proposition and baffled by an included option on our test vehicle. Mostly, though, we appreciated the choices made.

Upgrading the Bolt to more of a crossover body style is a logical progression, but only if the extra height, width, and length make sense inside the vehicle. Chevy grew the overall length by six inches, with over three of those inches going between the wheels. Three of those extra inches go to rear passengers as extra legroom, and it makes a difference if you're transporting adult friends rather than small kids. The back seat is now roomy for such a small vehicle, and the tradeoff in cargo space is minimal. At 16.3 cubic feet, the Bolt EUV's cargo space falls just short of the regular Bolt. A slight increase in ride height doesn't mean anyone is going to off-road the Bolt EUV, but parents putting small kids in the back will appreciate it over time. While the Bolt and Bolt EUV look similar, they don't share any body parts.

There's just one powertrain for the Bolt EUV, consisting of a 65-kWh lithium-ion battery pack feeding a 200-horsepower electric motor powering the front wheels. It's the same powertrain as the regular Bolt. The electric motor also makes 266 lb-ft of torque, which makes the Bolt EUV's extra 90 pounds of weight over the standard model unnoticeable under acceleration. So Chevy made no palpable compromise there. That healthy torque figure in a small vehicle makes the Bolt EUV brisk off the line; it boasts a zero to 60 mph time of just under seven seconds. That's quick enough for everyday driving, and we didn't demand more of the Bolt EUV over the week we spent with it. Where the weight and more upright styling make a difference is in the range. The estimated 247 miles is less than the regular Bolt's 259 miles. Still, that's plenty for a city car, whether it's the Bolt or the EUV model.

There's an inevitability when automakers ask their customers what they would like improved with their cars. The answer is invariably more space, and Chevy has delivered. The other demands involved technology, so the Bolt EUV comes with a large 10.2-inch infotainment touchscreen which is quick to respond to inputs and intuitive to use. Apple CarPlay and Android Auto are standard, as are voice recognition ability and a wireless phone charger. It's a big and worthy upgrade as the Bolt EUV is clearly aimed at the young, city-dwelling demographic. However, it's not all good news. While the interior is satisfactorily par-for-the-price in materials and style, the front seats feel like a significant compromise. They're not a carryover from the Bolt, and the seat bottom is hard and uncomfortable. Maybe younger bodies or more padded behinds won't be bothered, but we're far from impressed.

The Bolt EUV's suspension is built for comfort, and it easily deals with chopped up pavement. At highway speeds and coming across an unexpectedly big bump, the suspension shows its springy side, but overall it's perfect for a city car. Handling-wise, the Bolt EV is fine, meets expectations, and is fun to run around the city. If it weren't for the seats, we would prefer it over the standard Bolt - not that the seats in the standard Bolt are perfect. On a longer run, we started to realize how good the regenerative braking is at recapturing energy. On a downhill mountain stretch, we pulled back almost 20 of the 40 or so miles we lost going up the hill. A run into Los Angeles showed us that a clear freeway eats up the miles, while slower traffic with some stop and go is much better on the battery. Any which way, the Bolt EUV never left us with range anxiety. However, it did convince us that a 240-volt outlet for Level 2 charging equipment supplied or a Level 2 charger installed in the garage is essential if the commute doesn't have a charger at the end of it. The charger provided will charge off a standard outlet, but at a rate of only around four miles per hour.

Currently, the 2022 Bolt EUV's starting MSRP is $33,500 excluding a $995 destination charge, but on Chevrolet's website, the 2023 model shows a starting MSRP of $27,200. That turns the Bolt EUV into a bargain compared to the $34,000 Hyundai Kona Electric, which has close to the same power and range. At that price for the Bolt EUV, you can move up to any of the other trim levels and still not spend the $34,000 Hyundai wants for its Kona Electric. That includes the $31,700 (for 2023) Premier trim we spent a week with that adds things like 17-inch alloy wheels, ventilated leather-appointed seats, adaptive cruise control, rear park assist, and a plethora of extra safety technology. We would still suggest test-driving the Bolt EUV and then spending as much time in the front seats as possible to make sure they're not a dealbreaker.

Unfortunately, the Bolt EUV doesn't currently qualify for federal tax rebates, although local ones may apply. New legislation may bring back the federal tax incentives for the Bolt, though.

The Premier trim also sets you up for the option of Super Cruise, GM's excellent "hands-free driver assistance technology for use on compatible roads" that uses geo-cached mapping to operate. And that's where we found ourselves scratching our head as we would not recommend the Bolt EUV to someone who could justify the $2,200 upgrade with the freeway miles they log. While the Bolt EUV is fine on a freeway, it's at its best in and around the city. If that sounds like you and you're looking for a small yet capable EV, then the Bolt is worth a test drive. Just pay attention to those seats. 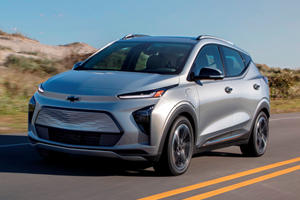