Before emissions regulations, the most common solution to get more power into a car was inevitably to put in a bigger engine. If that car is small, it's a challenge to fit something large that needs a lot of cooling into a small space. However, with a short wheelbase and less weight for the engine to propel, the result of a big engine in a small car is inevitably exciting. Or dangerous. Or both. Either way, though, it's a time-honored tradition, and that tradition is still practiced today. These are our favorite examples, past and present.

Carroll Shelby didn't invent shoving a huge engine into a tiny car, but he became a legend by doing so. The story starts in 1953 with a British company building a low-volume sports car with a 90-inch wheelbase powered by a straight-six engine making somewhere around 120 horsepower called the AC Ace. In 1961, Shelby wrote to AC Cars asking if the company could build him a modified version that could take a V8. Ford initially supplied Shelby with two Windsor 3.6-liter V8 engines and Shelby later toyed with fitting a 6.4-liter Ford FE engine, but it was the third attempt with the 1965 Cobra MKIII that became successful. Shelby fitted the sports car with a 7.0-liter Ford FE engine making 425 hp and 480 lb-feet of torque as standard. Shelby wanted his sports car to bite, and that's exactly what it did to the unwary.

In the American tradition of taking a British sports car and overloading it with power, Hennessey's Venom GT started it all; it was based on the light Lotus Exige/Elise and used a GM-supplied LS7 V8 engine with two turbochargers attached. The original version made around 1,200 hp with its most potent tune. The latest F5 version is even more bananas. The engine is still based on the LS V8 architecture, but Hennessey has built it with 6.6-liters of displacement and makes 1,817 hp and 1,193 lb-ft of torque. Hennessy claims a top speed of 311 mph and is only building 24 examples.

Also carrying on the theme of small British sports cars with an American V8 engine transplanted into it is the Ariel Atom V8. The Ariel Atom is a road-legal open-wheel sports car purely designed to drive to the track, put in laps, and then drive home again. The current version, the Atom 4, uses the turbocharged 2.0-liter engine from the Honda Civic Type R and is capable of hitting 100 mph in 6.8 seconds The Atom 500 V8 was an earlier limited edition model and came with a 3.0-liter V8 built by Hartley Enterprises in Milwaukee, Wisconsin. With the Atom 500 V8's road tune, the engine makes 475 hp at 10,500 rpm and 268 lb-feet of torque at 7,750 rpm, With its race tune, it'll generate 500 hp at 10,600 rpm and 284 lb-feet at 7,750 rpm. That's in a car weighing just 1,213 pounds, less than half the weight of a Civic Type R.

If you think Brits are afraid to shovel a giant engine into a small car themselves, think again. The last Aston Martin V12 Vantage left the factory with a 102.4-inch wheelbase (the Chevy Bolt EV has exactly the same wheelbase length) and is powered by a 5.9-liter V12 engine making 565 hp and 457 lb-feet of torque. It had a seven-speed automated manual transmission and could hit 60 mph in 3.7 seconds and then run on to 205 mph. The V12 Vantage S was about as old-school as you could get when it departed in 2018. The current Vantage is powered by an AMG supplied V8, but there is a swan song for the Vantage V12 coming as a 2023 model and just 333 units being built.

If you've ever driven a stock Mazda MX-5, you probably realize a V8 conversion defeats the point, but that doesn't mean the result isn't worthwhile. While not production cars, we can't ignore the amazing work of Flyin' Miata - a Colorado-based company that specializes in tuning MX-5 models. The company makes a seemingly endless amount of parts and kits for upgrading Mazda MX-5s for street or track, but it's the tuner's V8 conversions that grab headlines. Flyin' Miata will sell you a kit to make LS swapping any generation MX-5 as simple as an engine swap can be, but it can also offer turnkey products you can drive away. The car below was a special project using a Lingenfelter-built General Motors 6.2-liter LS3 V8 making 525 hp.

When the muscle car started to die out in the early 1970s, one of the strangest cars of the period was built. Muscle cars had become bloated and overweight, so Randall AMC, a dealership that literally wrote a book on tuning AMC vehicles, offered its own take on the weird little AMC Gremlin. AMC had already developed parts to allow its 5.0-liter V8 to be installed, but Randall AMC thought it was underpowered. So, the dealership went ahead and dropped a 6.6-liter version of the engine in and offered it to the public, along with a host of extra performance options. In 1972, Car Craft magazine took a well-optioned Gremlin 401-XR to the drag strip and promptly recorded a quarter-mile run in 12.3 seconds. That's a shade over two seconds faster than the Pontiac Firebird of the same year. It's also worth remembering the Gremlin had a wheelbase of just 96 inches, and, in 1972, traction control wasn't a thing, let alone electronic stability control. We shouldn't be surprised that only 21 401-XR models were built.

The Aston Martin Cygnet V8 is an example of what can happen when a company is forced to meet regulations in order to go about its real business. In this case, Aston had to sell a small car in order to comply with imposed fleet average emissions regulations. Aston did a deal with Toyota to rebadge the Toyota IQ city car as an Aston Martin model and sell it with a luxury interior. The tiny little Cygnet used a 1.3-liter engine making less than 100 hp and only around 300 were sold in total.

The Toyota IQ city car would be forgotten by now if it wasn't for Aston Martin. Well, Aston Martin and an Aston Martin customer with a sense of humor and enough money decided that the world needed a V8-powered Cygnet. The one-off Cygnet V8 edition is a marvel of engineering and uses the 4.7-liter V8 engine, transmission, suspension, brakes, and wheels from an old Vantage S, along with custom-made subframes to hold everything together. It produced 430 hp in a car with a wheelbase of under 80 inches. 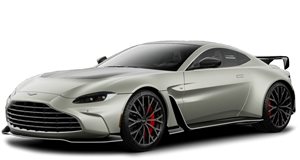 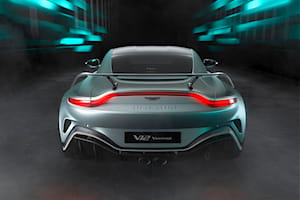