There are excellent reasons why four-wheeled vehicles with drive to each wheel are commonplace on the road versus six-wheeled vehicles with drive to each. The apparent reasons are cost, size, and weight. You wouldn't want to drive and park something with three axles on the road every day. And going off-road, something with four wheels is infinitely more maneuverable and more limber over a larger obstacle. What an extra axle with an extra wheel on each side of the vehicle brings to the game is two tires worth of extra grip and traction, and a better spread of weight. That suddenly comes into its own when traction is at a premium - like in mud and sand.

Because six-wheeled off-roading is such a niche market, it falls on niche companies to build them or tuners to take existing SUVs or trucks and convert them. As a result, they are expensive and often taken to whole new levels of crazy. These are some of the craziest.

While we've seen our fair share of 6x6 Jeeps, as far as we know, there's only one of these in existence, and it's utterly bananas. The Oculus Tron 6x6 Hemi Hellcat starts its build with a 6.2-liter Hemi V8 engine making 720 horsepower going under the hood of a Jeep Gladiator, and gets wilder from there. It looks insane and has featured in a major movie, but it's not just a visual statement. The Oculus Tron 6x6 features a 22-gallon fuel tank, a 3.73 rear axle ratio, auto-locking hubs, a brake-actuated limited-slip differential, and a single stainless steel exhaust. We last saw the monstrosity on eBay, listed for $220,000.

The luxurious Chelsea Truck Company's Flying Huntsman 6x6 Pickup is a little more realistic for general use than the Oculus Tron 6x6. The bodywork is hand-formed by the British firm with aluminum, and the donor Land Rover Defender 110 is extended by 34.6 inches for the extra axle. A rear roll bar is added, and under the hood is a 6.2-liter GM-supplied LS3 V8 engine making around 430 hp. Inside the extended Land Rover truck is a bespoke interior because you can't spend silly money and end up sitting on vinyl seats and listening to a tinny radio. If you decide you want an SUV instead, Chelsea Truck Co will even sell you a Huntsman Civilian 6x6 with a closed body and four rows of seating.

If you want to shut up the lifted truck posers in your neighborhood and have money to burn, you should talk to Hobbs Automotive. The shop took an M939 A1 tractor five-ton military 6x6 chassis, stuck a 2013 Chevrolet Silverado 3500 HD body on it, and gave it a 14-liter Cummins 855 CI diesel engine making 240 hp and 685 lb-ft of torque. As far as we're concerned, it's a rolling coal tune, a wind-torn American flag, and a "Let's go Brandon" bumper sticker away from being the last word in obnoxious A-hole bro trucks.

Mercedes actually sold the road-going Mercedes-Benz 6x6 G63 AMG, which is incredible for a mainstream manufacturer. However, Mercedes already had a six-wheeler it built for the Swiss army and used Magna Steyr to build the non-military version from 2013 to 2015. It uses the AMG 5.5-liter twin-turbo V8, making a little over 400 hp to all six wheels. There's no compromise in how the 6x6 G63 AMG was built and included an onboard air compressor, so the driver doesn't have to get out to lower tire pressures for slippery conditions and then get out again to raise the pressure for the road. If you want to see what it takes to defeat a G63 AMG 6x6, check out the video of supercar collector Greg B finding its limits in the snow in the Swiss Alps.

If someone is going to put crazy amounts of power into a Ford, it's going to be Hennessey. However, Hennessy also added an extra axle to the 2018 Ford Raptor Super Crew in this case. Under the hood, the 3.5-liter EcoBoost V6 now makes 600 hp, it's lifted an extra seven inches, Hennessey 20-inch wheels with 37-inch off-road tires, and the usual kind of additional bodywork the American tuner likes to tack on. The VelociRaptor 6x6 is rare, and the last time we remember one going up for sale, it had a selling price of $375,000.

Rezvani is known for building insane off-roaders based on existing models, including the insane Wrangler-based TANK. The Hercules 6x6 Pickup is also built using the bones of a Wrangler, not a Gladiator, and Rezvani describes it as "The God of All Trucks." You can get it with Jeep's stock 3.6-liter V6, a 500-hp 6.4-liter HEMI V8, or a 3.0-liter turbo-diesel, or drop around $250,000 on top of the Hercules 6x6's existing quarter of a million-dollar starting price and get it with a supercharged 7.0-liter V8 churning out 1,300 horsepower.

And if all of that wasn't crazy enough, you can get a Military Edition with ballistic armor made from Kevlar, bulletproof glass, and military-grade run-flat tires among several other upgrades.

The most absurd truck you can buy now from a mainstream manufacturer is the Ram 1500 TRX with its 6.2-liter supercharged Hemi V8 and optimistic 10/14/12 mpg city/highway/combined gas mileage estimates. So, Florida-based Apocalypse Manufacturing added an extra axle with two more wheels to answer a question nobody was asking. 37-inch all-terrain tires on 18-inch wheels tie it all together, but power remains unchanged from 702 hp. It'll only cost you $180,000, too, which seems like a bargain for something this extreme.

What's attractive to us about the 6x6 truck Apocalypse Manufacturing is calling Warlord isn't the name. Because that's just stupid. No, what we like is how stock the 6x6 TRX looks. From the photos, it seems like something that RAM could have put together as a concept that the bean counters would eventually kill before it made production.

At the time of writing, the Ford Bronco has been in production all of five minutes, and Apocalypse Manufacturing has already got a 6x6 version out there. Apocalypse Manufacturing doesn't just lengthen a vehicle, give it a five-foot-long bed, and put on a new axle, though. The Dark Horse runs as a 4x4 to the rear wheels but uses added hardware and software to create its auto mode that can decide when the front axle is needed. The Bronco's turbocharged 2.7-liter has been tuned to develop 400 horsepower to nearly match the Bronco Raptor, it rides on coilover suspension, and instead of a soft top, the Dark Horse has a slant-back, removable hardtop made with fiberglass. In its white paint, this one might be the most Florida truck we've ever seen.

Once in a while, when Americans believe that only they have the most badass off-roaders, a couple of Aussies will say, "Hold my beer and throw another shrimp on the barbie," while they have a crack at a project. In this case, Justin Montesalvo of Patriot Campers, an Australian company that builds and sells camping trailers and toy haulers, went to SEMA and liked what he saw. He was inspired to work with Jmacx Offroad Solutions to build the ultimate 6WD off-road tourer, and the Toyota Land Cruiser-based project was born. It's an incredible piece of engineering that rides on a custom air-suspension rig, a remote tire pressure system, carries a 70-liter water tank, and the engine, upgraded with a turbo, uses twin four-inch exhaust stacks. Inside, there's an electronics system made up of two lithium batteries, two AGM batteries, twin compressors, twin air tanks, solar panels, and a full lighting system. The wheels are purpose-designed 18-inch units wrapped in Mickey Thompson rubber. Unlike the majority of what Montesalvo saw at SEMA, the Megatourer 6x6 is not a show car. It's the real deal. 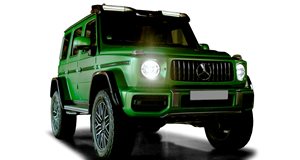 Teaser
This Is Our First Glimpse Of Acura's Electric Future 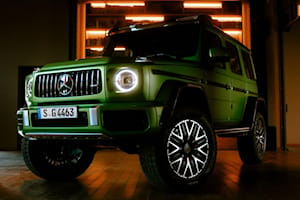