The modern sedan deserves more love than it's getting.

According to a recent JD Power report, SUVs and trucks accounted for approximately 80 percent of new-vehicle retail sales in the USA in the first month of the year. There's no getting around it - the outlook for the traditional sedan is bleak based on current buying trends. But what about the other 20% of the car-buying public? Are they seeing something that the majority isn't? Well, yes. It's amazing the clarity that can be had from a lower seating position where oxygen is more readily available. Quite simply, there remain multiple reasons to purchase a sedan over an SUV in 2022.

For the purposes of this comparison, we're going to compare the BMW 3 Series with its X3 cousin, and the Toyota Corolla Sedan with the Corolla Cross. Both BMW and Toyota pairings share the same platform, and we'll match them as closely as possible in terms of powertrain. If you aren't a serious off-roading enthusiast, or if you aren't towing much more than an occasional light trailer, then read on and see why a sedan is a smarter purchase.

On average, a sedan is lighter and more aerodynamic than a similarly priced SUV. With no desire to climb mountains or pavements, the sedan can be engineered to be as efficient as possible on tarmac where most of us spend most of our time. Both the BMW 330i and X3 sDrive30i use a 2.0-liter turbo-four engine, but whereas the former returns 26/36/30 mpg city/highway/combined, the equivalent X3 manages just 23/29/25 mpg. According to the EPA, the 330i's annual fuel cost works out to $400 less. The Corolla Sedan and Corolla Cross demonstrate the same pattern. Each has a 2.0-liter engine, but the former returns 31/40/34 mpg and the latter 31/33/32 mpg; in highway driving, the Corolla Sedan is far more efficient.

SUVs and crossovers are a lot taller than their sedan counterparts. Yes, this does improve interior space, but it results in top-heavy dynamics and the sensation that you're sitting on top of, rather than in, the car. The sedan's lower driving position, along with the fact that major controls are generally within easier reach in the more intimate cabin, make it the better choice for the enthusiast. Over the years, crossovers have narrowed the gap by becoming much nicer to drive, but rarely would you have more fun behind the wheel of one than in an equivalent sedan. The lower sedan typically exhibits less body roll in sharp corners, and a lower weight contributes to greater agility; the RWD 330i is over 500 pounds lighter than the RWD X3 sDrive30i. Both vehicles are great to drive, but few would choose the X3 over the 3 Series on their favorite twisty road.

This one is pretty obvious, as the lighter weight of a sedan will make it faster than an SUV with the same or similar power. Superior aerodynamics also play a part here. While both the 330i and X3 sDrive30i have turbocharged 2.0-liter four-pots, the 330i is actually more powerful and torquey, even though it's cheaper. It makes 255 horsepower and 294 lb-ft of torque, whereas the X3 sDrive30i produces 248 hp and 258 lb-ft. The 330i is almost half a second quicker to 60 mph; really, who wouldn't want a car that's faster, more fuel-efficient, and cheaper?

The Corolla Sedan with the same 169-hp 2.0-liter engine and CVT as the Corolla Cross is over a second quicker to 60 mph. Even better is that the Corolla Sedan can be had with a manual gearbox, once more underlining the driver-focused appeal of a sedan. There are many other examples out there. For instance, at around $35,000, you could get either a high-spec Camry V6 or a RAV4 with a much wheezier four-cylinder engine. The Camry is far more potent.

We'll admit, this one is purely subjective. But for the most part, the sedan is sleeker, lower to the ground, and less ungainly than an SUV. There's less empty space in the wheel arches, less ugly black plastic cladding relentlessly marketed under the term "rugged", and no brick-like front fascias. When you don't have to worry about maximum cargo capacity or off-roading, you can spend more time penning an attractive design.

Take a look at even the humdrum Corolla Sedan alongside its Corolla Cross sibling - there is simply no contest. The sedan is a far nicer vehicle to look at. And, while a Mercedes-Benz GLS-Class has the brash, get-out-of-my-way overtaking presence that many shoppers crave, it's not nearly as elegant as an S-Class. Another example of a sedan winning the catwalk contest over its raised siblings include the beautiful Volkswagen Arteon - no other VW SUV looks nearly as good. And, let's be honest, would you rather drive a Kia Telluride to the office every day instead of the athletic, sporty Stinger?

There's a common misconception that just because an SUV is larger and taller, it's automatically safer than a sedan. This isn't necessarily the case, especially when you delve deeper into every facet of vehicle safety. Like modern SUVs, the vast majority of new sedans emerge from tough crashworthiness tests with five-star ratings for crash safety. However, sedans are almost always ahead when it comes to rollover safety. Again, the height of an SUV makes it more top-heavy and increases the center of gravity. Therefore, they're more susceptible to being unstable during an emergency involving a sudden change of direction.

Large SUVs and trucks also pose a greater risk to pedestrians. According to Consumer Reports, of the 931 "frontover" fatalities recorded between 1990 and 2019, an alarming 80% involved an SUV, truck, or van. The combination of these vehicles' large, tall hoods and a bigger front blind spot were contributing factors.

Another aspect of vehicle safety relates to visibility. According to Consumer Reports, sedans generally have better visibility than SUVs. One might have thought that a taller SUV would dominate in this area, but the larger bodies and more pronounced pillars at the back make things more challenging from the driver's seat. Of course, there are exceptions - for instance, the Subaru Forester's visibility rates highly. But overall, sedans have the edge.

Specifically with regards to cargo, sedans are more secure than SUVs because accessing the enclosed trunk isn't as easy as it would be in an SUV, where the luggage area is easier to reach behind the rearmost seating row. With no cargo cover, or with a cargo cover that you may forget to close, your personal belongings are in full view of any shady characters loitering around your vehicle. The reality is that this isn't Austria or Iceland. In many North American cities, crime is a serious problem and a vehicle that is less likely to tempt thieves into a break-in is a smart choice.

7. Bang For Your Buck

Remember that weight difference of over 500 lbs for the BMW 330i and X3 Drive30i? That's 500 lbs of extra metal, aluminum, and strengthening that's required by BMW to give your SUV some mild off-roading capability that you'll probably never use. It naturally translates into a higher cost. Whereas the base 3 Series costs $41,450, the entry-level X3 goes for $43,700. And remember, it'll cost you more in fuel bills. Research indicates that the total cost of ownership for an SUV or crossover is 10-12% more than an equivalent sedan, also taking into account maintenance costs. Looking at our Toyota comparison, the Corolla Sedan begins at $20,175 and the Corolla Cross starts at $22,195.

The numbers make it clear that there are still many reasons to buy a sedan over a crossover or SUV in 2022. Chances are, you'll drive off in a vehicle that's faster, more enjoyable to drive, more efficient, safer in several aspects, and less expensive. Of course, there are exceptions and this piece doesn't seek to write off every SUV as a brainless buy. If you need more cargo space, more towing capability, and the ability to go off-road, an SUV is a better choice. But not everyone uses their vehicles for these purposes, and we'd bet that a large proportion of the 80% of shoppers buying an SUV would've ultimately been better served by a sedan. 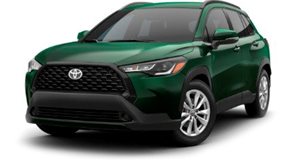