From the ugliest muscle car ever made to the ones that forgot to include muscle.

In the late 1950s and early 1960s, there was a period of convergence where automotive engine technology was outpacing safety legislation, emissions requirements barely existed for road cars and gasoline was cheap. The muscle car was born in a country where the largest automakers were based in areas dominated by straight roads and traffic lights. Drag racing already existed, born in the 1940s in California on decommissioned aircraft bases, but Detroit is where it took to the street in a big way.

Horsepower became cheap and people craved fast cars. But it was GM that opened Pandora's Box in 1959 when it put its 5.0-liter Rocket V8 from a luxury barge into the much smaller and lighter Oldsmobile 88. The muscle car was born. Soon after, the Pontiac GTO launched the segment into orbit. What came through the 1960s was a barrage of high-power cars that caught the public's imagination and, most importantly, were at least attainable if not easily affordable.

However, rapidly increasing insurance costs, tightening emissions legislation, and the 1973 oil crisis contributed to a steep decline in the muscle car. It saw a resurgence in the 1980s as technology started catching up with legislation, but the 1990s saw the segment wilt again. We often talk about the greatest muscle cars made and highlight exceptional examples, but now it's time to acknowledge there were some genuinely uninspiring muscle cars made - even at the height of their powers.

The Dodge Dart went on to be a legitimate inexpensive muscle car, but before it earned its stripes, the 1962 model existed. Customers could order it with a 6.2-liter V8 making 325 horsepower and 425 lb-ft of torque or even the drag-strip ready 6.7-liter Ramcharger V8, but that wasn't the problem. The automaker rushed to make the Dart a smaller car to compete with the rumored downsizing of Chevrolet's large cars that never came, hence the hastily put together styling. Dodge rectified the hideous mistake in 1963, and revisionist historians suggest that it was just an intermediate design. However, it was purely a rush job, as evidenced by Dodge dealers making enough noise at being left without a larger vehicle that they ended up with the short-lived Dodge Custom 880.

Yes, we're going to go there and drop a muscle car that can now fetch from a couple of hundred grand up into the millions on the auction block into this list. The 426-cubic-inch Hemi engine made 425 hp with 490 pound-feet of torque, and the 'Cuda has one hell of a racing pedigree. However, out of the factory, the steering was vague, and the suspension introduced a level of body roll that was downright dangerous for something making that kind of power. Then, there's the build quality to consider, which is best described as embarrassing, even for the time. The vast majority of restored versions are taken to better than the factory finish to turn it into the car it should have been when it rolled out to dealerships.

The 1970 Ford Torino Cobra was peak Torino with a full optioned for speed model being underrated at 375 hp. The most famous Torino, though, is the 1975/76 models used for the TV detective show Starsky and Hutch. However, the malaise-era Torino was a dog. It weighed in at around two tons and made a maximum of 260 horsepower from its enormous 7.5-liter V8. Even the stars of Starsky and Hutch disliked the car, mainly for its handling, although David Soul also cited the slippery seats not stopping him from being thrown around.

If you want a clear example of how far the muscle car descended from its golden years of the 1960s, let us present the Ford Mustang. The first generation Mustang ushered in the sub-genre of pony cars, and the 1965 Mustang became one of the most successful vehicle launches ever. Ford had changed the game again with a small, stylish, lightweight, sporty car with serious horsepower available in the options list.

The Mustang II undermined that in almost every way, despite Lee Iacocca wanting the evolved first generation to return to its roots in size and styling. The Mustang II was based on the Ford Pinto subcompact car; it was heavy, and it was woefully underpowered. Underscoring that is the King Cobra edition from the final year and its 4.9-liter V8 making a paltry 210 hp, the same as the first generation's V8 nine years earlier. However, the Mustang II was Motor Trend's 1974 Car of the Year, so there's that.

One of the worst muscle cars appeared at the end of the 1970s. The R/T performance coupe version of the Dodge Aspen came with a lot of indicators that it was a sports powerhouse, including "Rallye" wheels, a blacked-out grille, body striping, and decals and badging to let everyone know to expect something special. Unfortunately, there was nothing special about the Aspen R/T under the hood. Its 5.9-liter V8 made just 170 hp and wasn't available in California because it returned an average of just 15 mpg. Usually, people will accept bad fuel economy in a fast car, but a quarter-mile time of just over 17 seconds is laughable, even for the time, for that amount of displacement.

The 1980s didn't get any better for muscle cars, and the Pontiac Grand Prix 2+2 is one of the saddest homologation specials to grace American roads. NASCAR and aerodynamics were the key components for what was dubbed the "Aerocoupe." As a homologation car, you would be forgiven for expecting it to have become the same kind of legend as the 1969 Dodge Charger Daytona. That car had that massive nosecone, a ridiculously high rear wing, and a brutal 425 hp burbling away under the hood. Conversely, the Pontiac Grand Prix 2+2 a shorter trunk lid with a spoiler shaped into it, a contoured rear window, a slightly pointier nose, and made 165 hp because Pontiac couldn't fit its larger 180 hp V8 in the engine bay.

Only 1,225 were built in 1986, and 200 of those were Richard Petty editions. Yes, you read that right. Pontiac sold limited edition cars with Richard Petty's name on them that made 165 hp. Sorry, King.

Back in the day, the 1964 Oldsmobile Cutlass 4-4-2's 5.4-liter V8 made 310 hp and was born out of the horsepower war Oldsmobile was in with Pontiac. The 4-4-2 name indicated the model has a four-barrel carburetor, a four-speed manual transmission, and two exhausts. Oldsmobile launched its fourth-generation of the Cutlass with a 4-4-2 package, it looked good and its 5.0-liter V8 sounded great. But it made a disappointing 160 hp in the coupe version. The sedan wasn't much better, with just an extra ten hp under the hood.

Oldsmobile did resurrect the 4-4-2 badge twice after the fourth generation, but even the sixth-generation one only made 190 hp in 1990. 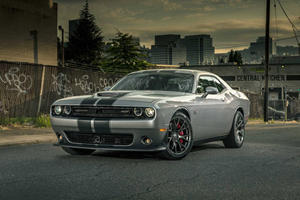