A Brief History Of The Volkswagen Golf R

The Volkswagen Golf R has evolved into one of the most capable hot hatches around, and as great as it is in standard form, it's a pretty good base for tuning too. The newest model in the lineup, based on the eighth-generation Golf, has evolved further than ever. You can get it as a wagon in Europe, but none of these awesome variants would exist without the original Mk. 4 Golf R32. In celebration of five generations of R-badged Golfs, Volkswagen is taking us on a trip down memory lane to see just how far the car has come.

In 2002, the aforementioned Mk. 4 arrived as the first Golf to wear the Volkswagen Racing division's R badge. The hot hatch was powered by a 3.2-liter VR6 motor developing 240 horsepower, but it was noteworthy for other reasons too. 4Motion all-wheel-drive was standard and in Europe, the car got the DSG dual-clutch transmission - a first for a production car.

Just think about that for a second - VW had built a roadgoing production performance car with a double-clutch gearbox before even Ferrari. The six-speed manual was the only option in North America and the car was limited to just 5,000 examples. It was finished in a Deep Blue Pearl color which would go on to define the Volkswagen Racing brand with various interpretations of this hue garnishing future models.

Take Two: The Last Of The VR6 Engine

In 2005, the next generation of R32 Golf - and ultimately, the last - would debut with 250 hp and the ability to do 0-62 mph in 6.2 seconds with the DSG transmission. But with more luxury and better tech, so came more weight. Again, North America got just 5,000 of these for the 2008 model year, this time with no manual gearbox option. Other changes included the addition of the production number laser-etched onto the steering wheel. The optional Recaro 'Wingback' seats were a highlight. Despite its increased heft and the lack of a manual transmission in the US, it remains an icon, and both it and the Mk. 4 version are celebrated in the Volkswagen tuner scene. There's even an R32-only event that happens every year called 'Wookies in the Woods', so named after the guttural growl of the VR6-derived engine.

Sadly, that Chewbacca-like sound was nowhere to be found in the next generation. Simply called the Golf R, the 3.2-liter narrow-angle V6 was killed off due to tightening emissions regulations, although many said it was because the R32 motor made the car too heavy and too slow. Thus began the era of the turbocharged Golf R. No longer a limited edition, it debuted at the 2009 Frankfurt Motor Show with an upgraded version of the Mk. 5 GTI's 2.0-liter TFSI motor, although it was badged TSI. In the GTI, a K03 turbo was fitted, but along with Haldex-based AWD, the R got a K04 turbo, boosting output to 256 hp in the US.

A new shade of blue debuted too, called Rising Blue Metallic, and this model came with a dual-exit center exhaust finisher. It arrived in the US in 2012 for the 2012 and 2013 model years, but while other markets got the DSG, the US went back to a six-speed manual only.

In 2013, the Mk. 7 Golf R debuted with a quad-exit exhaust, with US customers seeing it arrive two years later with 288 hp and both the DSG and manual gearbox options. The former was later upgraded to a seven-speed, and like the Mk. 6 before it, the 7 R used the GTI's motor with some upgrades that included the BorgWarner IS38 turbo, again borrowed from Audi's S3.

Launch control and DCC adaptive damping featured here, although these two additions were already available on the 6 in other markets. The sprint from 0-60 mph was possible in under five seconds and the new shade of paint called Lapiz Blue Metallic debuted. In 2018, the VW Spektrum program was introduced for the 7.5 facelift R, and the choices were wild. Canada got access first, with the US joining the party in 2019.

And finally, in 2021, the fifth generation of R-badged Golfs arrives with the Mk. 8 Golf R. The EA888 2.0-liter turbocharged four-cylinder (still called the TSI) now produces 315 hp and 310 lb-ft of torque. A newly-developed torque-vectoring 4Motion AWD system debuts too and for the first time, a drift mode is accessible. Lapiz Blue is again the color of choice, although, as with previous generations, other colors will be offered.

This will be the most advanced, most powerful, and most luxurious Golf R yet, but it all began with a crazy little hatchback from the early 2000s boasting an enormous engine that you'd never see in a hatch today. What a legend the Golf R has become. 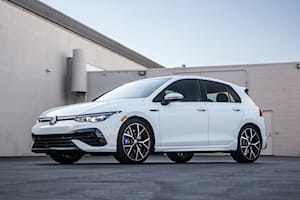