When we think German car tuning specialists, the first that spring to mind is AMG and Brabus for Mercedes, and Alpina, AC Schnitzer, and the M division for BMW. We often forget ABT Sportsline, a company with a long and rich history that specializes in tuning Volkswagens and Audis.

ABT Sportsline's roots go back to 1896 and a blacksmith called Johann Abt. He was an innovator when it came to horse-drawn carriages, but when his grandson started entering car races in the 1950s, the motorsport bloodline started. Also called Johann Abt, he founded ABT Tuning in 1967, and it's still family-owned. Currently, the CEO is Hans-Jurgen Abt, and it looks like there will be another generation to come as his son, Daniel Abt, works for the company and is racing in Formula E.

ABT is also heavily involved with Audi in its motorsports efforts, but we're going to concentrate on some of the outstanding cars the German tuning group has set free on the roads.

The RS7 has never been slow, but ABT cranked the 4.0-liter twin-turbo V8 to 666 horsepower and 612 lb-ft of torque. However, that was the base tune. The Power S package dialed the output up to 700 hp and 649 lb-ft, an increase of 140 hp, and 132 lb-ft over the stock Audi RS7. ABT brought more power to the party, but its remapped ECU and matched exhaust system kept everything super-smooth and useable. Along with the power upgrade, an exposed carbon-fiber spoiler, stainless-steel silencer system, muffler system, and ABT wheel spacers were available.

The Audi TT RS-R was limited to just 100 models. Starting with the already hardcore TT RS, ABT took it a step further, making it almost as quick to 60 mph as a V10-powered Audi R8. ABT gave the turbocharged 2.5-liter five-cylinder engine an additional 100 hp for a total of 500 horses. Torque was also increased to 420 lb-ft, resulting in a 0-62 mph sprint of just 3.4 seconds. A stainless steel exhaust system with quad tailpipe completes the engine work. But, power isn't all ABT added. A new aggressive body kit includes a carbon-fiber front spoiler, side skirts, and rear diffuser.

This entry won't be to everybody's taste, but there's something incredibly lovable about ABT's enhancement of Volkswagen's topless Beetle. It wouldn't be our first choice for a sports car, but a restyled front spoiler, body-colored headlight covers, and redesigned rear panel and skirt set certainly gives it a unique look. Custom suspension springs then lower the convertible by 30 mm at the front and 35 mm at the back, and ABT gave a choice of new wheels ranging from 18 to 20 inches in size. ABT was happy to tune any of the Beetle's engines, but the range-topping 2.0 TFSI could have its power increased to 260 hp and 258 lb-ft.

The R8 is a special car in many ways, but with the horsepower in the 2010 model pumped up an extra 75 hp to 600 hp, it becomes even more special. An increase in torque and all that power going to all four wheels gave the ABT version a 0-60 mph time of 3.8 seconds. The bodywork package was created by ABT's German touring car crew, including the distinctive rear wing. The cherry on top is the BR-type 20-inch wheels, which suit the car perfectly.

For the more hardcore Audi R8 fan, ABT set about creating a race version with license plates. Dialing up the output to 620 hp, and adding a new exhaust and suspension system was just the start. ABT then put it on a diet, starting with a carbon-fiber hood, front and rear aprons, adjustable rear wing, and tailgate, as well as the door mirrors, door panels, and windows. On the track, it hits 60 mph in 3.2 seconds while the ABT Sports suspension takes care of stability, and a ceramic brake system takes car of slowing down. Inside, there are Recaro racing seats, a 4-point seat belt system, an ABT Sports steering wheel made of carbon-fiber, and a roll bar. Only 25 were built, so its a rare and speedy bird.

At the start of the 2000s, the Audi Sport Team and Abt Sportsline A4 was raising hell in the German touring car championship. ABT decided to do something special for the road and created the special edition ABT AS400. The 2.7-liter twin-turbo V6 was tuned to generate 400 hp and 369 ft-lb of torque, enabling the car to sprint to 62 mph in just 4.7 seconds. With speed taken care of, ABT gave it a new suspension system and tuned it for road and track. It also got a new braking system, and each of the 25 models came with a custom interior that included new instrument clusters and aluminum pedals. Topping it off was a choice of 18 or 19-inch titanium-colored ABT sport wheels.

For those that bought an S6 in 2013 but wished they had spent more for the RS6, ABT had a solution. The twin-turbo V8's new 600 hp came from a tune and a new ABT turbocharger. That gave it 40 hp more than the 2013 RS6. ABT went on to tune the suspension and improve the aerodynamics. It hit 0-60 mph in 3.9 seconds, stuck to the road like an RS6, and, for good measure, ABT removed the speed limiter. So, you can imagine what they did with the RS6.

The Audi RS6 is now available in the US, and the ABT Audi RS6-R is, to our mind, the tuner's finest achievement on the road. It comes with 740 hp, compared to the stock 4.0-liter twin-turbocharged V8 engine's 590 hp, and a top speed of 200 mph. It also features a naked carbon-fiber body kit, new 22-inch wheels, and a new interior with lashings of carbon fiber, Alcantara, and new racing seats. ABT has done a great job of not going overboard on the looks and then going over the top on performance. 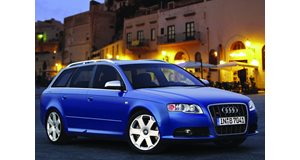