A used alternative luxury sedan can be a huge bargain.

At the 2019 Los Angeles Auto Show, Genesis showed off an extensive facelift for its flagship luxury sedan, the G90. The engine options remain the same, either a 3.3-liter twin-turbo V6 producing 365 horsepower or a 5.0-liter V8 producing 420 hp, but the exterior and interior have each been extensively overhauled. Pricing has not been announced yet but it should be close to the current G90, which starts just under $70,000.

Since the G90 is a less expensive luxury alternative to flagship models like the Audi A8, BMW 7 Series, and Mercedes-Benz S-Class, we wanted to put together a used Smart Buy list that was devoid of these three benchmark German models (with one small exception). Here are seven cheaper alternative luxury sedans you can get for less than a new Genesis G90.

Cadillac re-entered the large luxury sedan space with the rear-wheel-drive CT6 sedan back in 2016. While the CT6 has only been around for a few years, there is already doubt surrounding a potential successor and used examples have become affordable. We found several examples with the 3.6-liter 335-hp V6 or more efficient 2.0-liter 265 hp turbocharged four-cylinder for just $25,000. Even the twin-turbo V6 model with 404 hp can be found for less than $30,000.

Like Cadillac, Lincoln brought back its full-size Continental sedan for the 2017 model year yet its future is already in doubt. Lincoln will sell a few limited examples of a Continental with rear coach doors before the model exits production but based on their prices, a used example is the right way to go. Examples with the 3.7-liter 305-hp V6 can now be found for under $20,000 while the 2.7-liter twin-turbocharged V6 models are about $6,000 more. If you want the most potent 3.0-liter V6 with 400 hp and AWD, they cost around $30,000.

Before the Genesis brand was spun off into its own luxury arm, Hyundai sold an executive sedan called the Equus. Hyundai originally offered only one engine, a 4.6-liter 385-hp V8, but later introduced a 5.0-liter V8 with 429 hp. Used examples can be found starting at under $10,000 and even the low-mileage examples can be found for less than $35,000. It wasn't the most inspiring design of all time but the Equus is still luxurious even by 2019 standards.

The Lexus LS has long been the less expensive and more reliable alternative to a German flagship sedan. The last-generation LS 460 model has now become reasonably affordable with used prices starting at well under $10,000 for high-mileage examples. Lexus is famed for its near-bullet-proof reliability and the 4.6-liter 380-hp V8 will run like clockwork as you rack up the miles.

We said we weren't going to include a traditional Teutonic nameplate here but the BMW Alpina B7 is hardly a traditional car. Alpina takes a standard 7 Series and beautifies it with a new appearance package, a bespoke interior, and those wonderful wheels. Used examples from 2014 and earlier can be found under $45,000 and all come powered by a 4.4-liter twin-turbo V8 producing between 500 and 540 hp. It is easily the most expensive car to maintain on this list but it is also the most unique.

If you're shopping for a Genesis G90, chances are you want to have the most unique car on your block. It doesn't get much more unique than the Volkswagen Phaeton. Sold in the US from just 2004 to 2006, the Phaeton was the pet project of late VW Chairman, Ferdinand Piëch. The Phaeton was so well-engineered, it actually shared a lot of its components with the Bentley Continental. Engine choices in the US were limited to a 4.2-liter V8 with 335 hp or a 6.0-liter W12 with 444 hp. Like the Alpina, this one will require a ton of additional maintenance but it could be worth it to have one of the most interesting cars ever built. 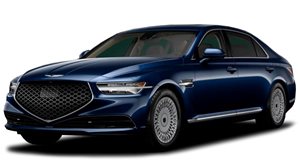 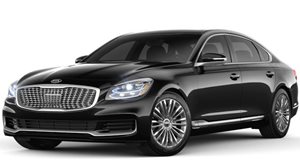