Is imitation really the best form of flattery?

The Chinese automotive industry has grown like wildfire in recent decades. The fuel for the fire is a lack of respect for copyright and the willful stealing of designs. Jaguar recently won a significant case in the Chinese courts against Jiangling Motors for its imitation of the Range Rover Evoque. Unfortunately for businesses having designs ripped off, there is no actual international copyright law, just international agreements between countries. The deals in place insist that countries recognize each other's intellectual property laws and abide by them but China has a reputation for not really caring. In recent years, however, China has slowed down on the number of copies being churned out but has far from ceased the practice altogether. Not only are some of the cars clear copies of existing vehicles, but they tend to be sold incredibly cheaply compared with the original and with less than stellar build quality and performance.

We're filing the following Chinese copycat cars under Good and Bad based mostly on how much they look like the original, and in no way condoning the practice.

If you live in China and want to impress people with a Porsche Macan but can't afford it, Zotye will happily sell you an SR9, formerly known as SR8. It's an impressive copy that could easily fool at first glance, and even a second glance given the similarity of the badges. Even the interior is a decent looking copy. Still, instead of having the base Macan's 248-hp turbocharged four-cylinder engine, you would be driving around using a 2.0-liter Mitsubishi engine that develops 190 hp. As for the driving dynamics, we're not optimistic.

The Mercedes-Benz GLA is a stylish subcompact SUV. The Link Tour K-One, however, is not. It looks like someone gave a designer all the ingredients for a GLA, and they just tossed them in a bowl before slapping it in the microwave. The styling elements are clearly "inspired" by the GLA, but the vehicle itself is a lot smaller and has an all-electric drivetrain. The drivetrain makes 128 horsepower compared to the 208 hp from the GLA's turbocharged 2.0-liter 4-cylinder engine. Beyond that, there's little else to compare.

The name Landwind evokes the idea of a swift vehicle, but looking at it evokes the feeling you're looking at a careful copy of the Range Rover Evoque. Range Rover thought so too, and this is the car that started legal action against the Landwind brand's owner, Jiangling Motors. A Beijing lawyer actually had the gumption to say: "Without detailed information, it's hard to judge whether Jiangling copied the design of the Evoque." However, his words rang hollow, and the Landwind X7 has just gone out of production due to the legal action.

The GE even has a sort Flying Lady emblem above the grille, that's how "influenced" the model from Geely was by the Rolls-Royce Phantom. Unfortunately for Geely, a fancy badge does not make a fancy car and this lacks any of the elegance and style of a real Rolls Royce. The first iteration of the GE was displayed at the 2010 Shanghai Auto Show and drew the obvious criticism straight away. The GE name stands for Geely Excellence and costs around $44,000; that's just a fraction of an actual Rolls Royce Phantom. Inside, the GE features pure wool carpeting, massage seats, subdued lighting, and a wine cabinet. It was quickly restyled for 2011 and went out of production in 2018.

Moving into unashamed clone car territory, the Dongfeng EQ2050 is a reverse-engineered AM General Hummer H1. The US doesn't seem to have a big issue with this copy as AM General Motors took part in getting American-made parts for the first EQ2050s built. Under the hood, it has a license-built Cummins turbocharged diesel engine that can be swapped for the original US-made V8 diesel lump. It went into production in 2014 and is used by the People's Liberation Army as well as Chinese Public Security Police forces and People's Armed Police Fire Fighting brigades. There's also a civilian version that's been previewed called the EQ2040H Brave Soldier.

If that large grille shape and side profile looks familiar, then you've seen the European market Ford S-Max before or the smaller US market C-Max model. Yet, somehow it has even less style or charisma. The Lifan Xuanlang MPV entered the Chinese market in 2017, and cost around $10,000. Frankly, the copy is as uninspiring as the original, and the Chinese version comes with either a 1.8-liter engine making 133 hp or a 2.4-liter power plant producing 167 hp.

We think this is a decent looking truck, but we also suspect someone was trying to be a bit clever in their design lifting. Instead of outright copying the Ford F-150, it's clear that the designers spent some quality time looking at the pre-facelift Ford Explorer. There are several versions of the T340 out there, and its equivalent price ranges from $16,500 to $21,300. It's powered by a 2.5-liter turbo-diesel engine making 127 hp and 236 lb-ft of torque, while four-wheel-drive models are available.

Clearly, little effort went into copying the Mini Cooper for the Lifan 320, and the designer may have seen a Fiat 500L on his way into the office for the more "upscale" 330 version. It first appeared in 2008 but stopped selling in China in 2012 due to low sales. It was a sign that the Chinese public was starting to want something more than cheap knockoffs of real cars. However, it can still be bought in Russia, and if there's any doubt that Mini was the "inspiration" for the Lifan 330, check out the interior picture below.

BAIC Group is a state-owned enterprise and has joint ventures with Hyundai and Daimler AG. It has also tried to buy struggling Western automotive concerns like Volvo and Opel, and successfully purchased Saab Automobile's technology so it could build Saab cars under its own badges. The BAIC BJ80 looks like a Mercedes G-Wagen, something a Mercedes-Benz spokesperson pointed out on social media, and rumor had it at the time that Daimler was not happy about the similarity. While the G-Wagen was an influence, the BJ80 is based on the Qishi S12, which is a clone of an earlier model Jeep Cherokee so it does have at least some ability to go with the rugged looks.

Suzhou Eagle specializes in a massive range of golf carts; some even dressed up as classic vehicles. The Suzhou Eagle Carrie isn't a golf cart, though. It's a full-size electric car the company showed off in 2015 to the amusement of some and the interest of lawyers at Porsche. It's an incredibly brazen design, but it does answer a question nobody asked: What would it look like if you crossed a Porsche Cayman and a Ferrari F12 together? Maybe like this, but it would probably have a top speed higher than 70 mph though. We thought it looked good at first, then the proportions started to sink in and everyone started to get a headache.

BAIC is responsible for our second favorite comical mashup of existing designs after the Suzhou Eagle Carrie. At the front, you can see a heavy hint of Jeep Cherokee in the BJ40, while the side profile is all Jeep Wrangler. It comes with a 2.4-liter four-cylinder petrol engine producing 143 hp, but in case you're wondering if it has any off-road potential, then it's worth knowing there's a model coming called the BAIC BJ40 Plus City Hunter Edition. However, it does boast a decent approach angle of 37 degrees and a departure angle of 33 degrees, and it sells well in Kuwait. Begrudgingly, we'll admit it looks pretty good, although Jeep probably doesn't agree. 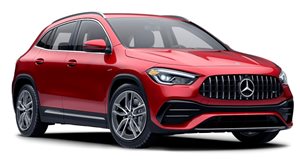