Buick has finally perfected its large sedan formula, but is it too little, too late?

When you look at the 2018 Buick LaCrosse, what do you see? A fine premium/luxury sedan that lures some business away from foreign brand competition, or a dated large cruiser that's more appealing to grandpa, who recently relocated to a new condo in Florida? Unfortunately, it's the latter answer that, unfortunately, is more common. As we've stated regarding the LaCrosse's competitors in this week's series, the large front-wheel drive sedan does not have a bright future, despite the fact that today's offerings are truly excellent cars.

In fact, they offer a lot for the money and the 2018 Buick LaCrosse is no exception. The first generation LaCrosse hit the market for 2005, but it was really nothing more than a heavily restyled Chevrolet Impala. It served as a replacement for the Century and Regal. Remember, this was GM pre-bankruptcy, so the overall level of build quality and refinement isn't what it is today. But still, the first generation LaCrosse was a step in the right direction for Buick, which at the time lacked identity. That all changed when the all-new, second generation LaCrosse arrived for 2010. It was unlike any previous Buick from the past few decades and signaled the start of a new era for the brand.

Built on a then all-new platform, also shared with the Cadillac XTS, the new LaCrosse was more upmarket than its predecessor, featuring an entirely new design language inside and out. Honestly, it was hard to believe a modern day Buick could look this good. Not only did this LaCrosse appeal to Buick's loyal customers, it also found some new business, such as those who cross-shopped with the Toyota Avalon and Lexus ES 350. Of course the LaCrosse was no sport sedan (it still isn't), but it still incorporated a number of new technologies, such as new front suspension design and a mild hybrid version.

The sales figures easily warranted a successor, which arrived for the 2017 model year and is still on sale today. Once again, it rides on a new and lighter platform, now shared with the Chevrolet Impala. It's larger than its predecessor and further refined. The rear seat is also larger than before, an important factor for many buyers. Once again, it ain't no sports sedan, but Buick does now offer an optional adaptive suspension package, including 20-inch wheels. Still a highway cruiser at heart, this $1,625 package enables the LaCrosse to handle a twisty mountain road without spilling over the edge (it weighs around 3,700 pounds).

If your budget allows, get the better suspension because without it the LaCrosse is still a big old sedan without much driving personality. There is an all-wheel drive version, available exclusively with the Premium trim, which adds another $2,200 to the price. Under the hood, all LaCrosse variants are powered by GM's competent 3.6-liter V6, good for 310 hp and 282 lb-ft of torque. Power is directed to the front (or all) wheels through a nine-speed automatic. Design wise, we like the exterior overall, but still think Buick could have pushed things further than it did. That's not to say it's a bad looking car, but considering the Avalon received a fairly dramatic redesign, the LaCrosse does sort of aim for the plain vanilla crowd.

Fortunately, there's still a lot of chrome touches and a handsome character line that arches upwards at the rear wheels. Inside you'll find a good-looking, though not ground breaking, design. There's greater use of soft touch materials than previously, and real wood trim is optional. We particularly like the 8-inch frameless touchscreen, home to GM's latest infotainment technology, which is a huge improvement over previous versions. Another bonus: Apple CarPlay and Android Auto are standard. Pricing? Darn reasonable. A 2018 LaCrosse begins at $29,565, while a fully-loaded model Avenir trim will ring up the total to around $53,000.

Quite a price range, we know, but that's what Buick was aiming for: a LaCrosse for many budgets. The larger issue at hand for Buick is dwindling sales, but of course you knew that already. In 2010, 61,178 LaCrosse sedans were sold, and sales have decreased every year since then. Despite last year's complete redesign, only 20,161 were sold. Compared to this time last year, the numbers are a bit better, but it's still too early to tell where things will end up come next December 31. And it's kind of a shame, really. As soon as Buick finally nails its highly-regarded large sedan formula, the segment appears to be disappearing.

Fortunately for Buick, it's preparing itself already for this likely event, thanks to its three-model crossover lineup that continues to draw old and new customers into showrooms.

Electric Vehicles
Tesla Will Save Drivers Money By Judging Their Driving 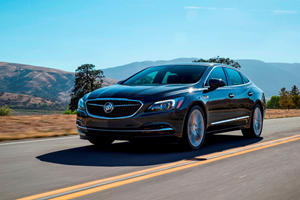