Another example of a perfectly fine premium large sedan losing the crossover fight.

There is absolutely nothing wrong with the 2018 Kia Cadenza. In fact, we fully recommend it for anyone in the market for a large front-wheel drive sedan. Like all Kias, it's a lot of car for the money. It comes with many premium standard features (and some optional ones for not a lot more money) that not too long ago were found in luxury sedans only. Now, you may be asking yourself what's the difference between the Cadenza and the K900, which the second generation model just had its debut.

The Cadenza is built on a FWD platform whereas the K900 is built on a RWD architecture, shared with the Genesis G90. The new K900, however, comes with AWD only. So think of the Cadenza as simply a larger Optima. First launched in the US for 2014, the Cadenza was the twin of the now discontinued Hyundai Azera. Both were designed to appeal to the Toyota Avalon crowd, which at that time consisted largely of aging baby boomers. The Avalon's recent redesign has a far more youthful and emotional look, but we also have a gut feeling its time is limited. Back to the Cadenza: why did it deserve to live on while its Hyundai counterpart bit the dust? Because of the new Genesis brand.

The largest sedan Hyundai needs is the Sonata, while the rest is left for Genesis. Meanwhile at Kia, the target audience is not only a bit more youthful, but also isn't ashamed to say they're driving around a big Kia sedan despite the brand's previous cheap car stigma. The sales numbers since 2014 are telling: nearly 30,000 units sold in the US. Is that a great number? Well, let's compare. Take the wildly popular Sportage crossover, for example. Around 250,000 have been sold in the US during the same time period. This figure is expected to only increase - for the Sportage that is. The Cadenza? Honestly, we don't know how much longer it can fight on. It's a losing battle.

And that's a shame because, as we said, the current Cadenza is a fine sedan. Styled under the guidance of Kia's superstar design boss, Peter Schreyer, the new for 2017 Cadenza features the latest incarnation of the brand's "tiger nose" front grille with zigzag-shaped LED headlights. There's a similar pattern out back. Notice the clean body panels and confident stance. Despite being FWD, the Cadenza, from certain angles, could be mistaken for something RWD, which was exactly the point. In fact, we'll even go so far to say the Cadenza is almost like a blend between a Volvo S90 and an Audi A6. Remember, Schreyer's previously employer was the Volkswagen Group, where he designed the original Audi TT.

It's an elegant look overall and the panoramic sunroof is another luxurious touch. Heck, for the top trim SXL there's even power rear window sunshades. Not bad for a car that tops out at $45,000. It looks and feels a lot more expensive than it actually is. How does it drive? Well, in our experience with the previous generation, we weren't overly impressed. Without question it was not a sport sedan, no matter how hard someone may try to convince you otherwise. The second generation Cadenza is said to be a big improvement, though still don't call it a sporty, but rather a very comfortable cruiser. And that's just fine. Kia already has a RWD sport sedan, the Stinger GT.

Meanwhile, the new K900 is there to take the AWD luxury sedan fight straight to the likes of BMW and Lexus. As for the Cadenza? Therein lies the problem we predict Kia will soon be faced with. Despite the second generation only being on the market since last year, chances are it won't see a replacement. For all we know, it may be discontinued just when its mid-life refresh should be happening. But again, this is all speculation based on current industry trends. Kia dealerships may already be asking Kia corporate why the largest crossover it sells is the mid-size Sorento? Why not a full-size crossover with a more usable third row of seats?

If the answer boils down to the matter of not wanting to over-saturate the Kia vehicle lineup or not, the Cadenza could be the first to be sacrificed for the sake of additional crossover profits. That's just basic business. 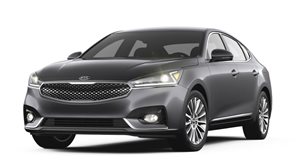 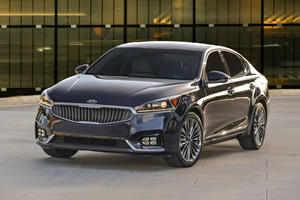