The Koenigsegg Jesko was amazing enough, but then Koenigsegg announced the Jesko Absolut, and we couldn't decide which was best. The original for handling and insane pace, or the Absolut for even more insane pace? Unless you're one of the lucky few with the kind of money to actually need to make a choice (Koenigsegg won't let you have both), it probably doesn't matter. We've just been soaking up the teasers and videos of the new "megacars", as Christian von Koenigsegg calls them, with their epic engines. Just a few days ago, von Koenigsegg whet our appetites further by revealing a pre-production Jesko, and a few days on from that, he's taking us on a personal tour of the car's many exciting features while also revealing the car's new name.

There's plenty to talk about here, so let's get started. CvK starts by mentioning again that the orange finish of this pre-production prototype was inspired by the CCR. Interestingly, almost half of the CCR models ordered at the time were in this color, so it's quite special to the company. Koenigsegg says that the Jesko was designed from the tires up, and they're quite remarkable too. Michelin Pilot Sport Cup 2 R rubber specially developed in collaboration with Koenigsegg is wrapped around Aircore carbon fiber centerlock wheels that weigh less than 15 pounds. The composite brakes were also made especially for this car and promise "next-level braking performance".

Around this point, you may be wondering what the new name of the car is, so let's prepare you by saying that it seems perfect for a car meant to chase lap times but that we also think it was borne of a desire to stop hearing this car being called the "standard" Jesko. So here it is: Jesko Attack. Yes, you have a big engine meant to chase horizons, but the really special stuff pertains to the handling when you're attacking a track. Starting at the front, the signature removable roof cannot be stored in the front luggage compartment. That's because the car features a massive air dam that exits through the front hood for exceptional downforce. It's also because of the complex Triplex suspension system, which features an additional damper, but more on that later.

Brake vents exit behind the front wheels, into the flow of the air heading for the massive rear intercooler ducts in and behind the doors. In the side rollover bars of the roof, new intakes for the engine have been stealthily integrated so as not to disrupt airflow, but an added benefit is that the team was able to create a "wider, longer, bigger rear window," giving the Jesko Attack a "reasonable rearview" for the first time. Visibility and comfort are actually better all-round, as the windscreen has been raised compared to earlier Koenigsegg models for a better outward view, and the monocoque has been stretched by 50 millimeters to create the "roomiest" Koenigsegg ever made.

But back to aero. The thing most people will take note of is the protrusion at the rear. Pioneered on the One:1, the top-mounted active rear wing was refined and made smaller for the Agera RS, but here, CvK says that a "massive rear wing" is one of the lightest, most efficient ways to create downforce. He does acknowledge that others have found success with fans (GMA T.50, ahem) and other measures, but Koenigsegg still finds this design to be the best way forward. Because it is top-mounted, there are no pylons holding the wing up. This means there is no underwing airflow disruption, and with that being the part of the wing that CvK says creates the most downforce, the otherworldly aero appendage really starts to make sense as more than an attention-grabber.

Right, onto the performance. We already know quite a lot about the 1,600-horsepower-plus 5.0-liter twin-turbo V8 in this car, and CvK again touches on what makes it special. With no flywheel or traditional clutch, CvK says it "feels almost like a Formula One engine". A few gratuitous revs before he sets off prove that he's not wrong - this sounds like a highly-strung race engine. Its 9-speed sequential transmission gets a little demo later in the video, but before we forget all about the aero, let's get back to that multi-faceted suspension system we touched on earlier. In a car that will be capable of well over 278 mph, and with so much downforce necessary to keep it stable, the suspension has also been suitably upgraded.

It's a Triplex suspension system at the rear and now at the front too, meaning additional horizontal shock absorbers and springs connected to a hydraulic tensioner that increases the pretension on the spring the faster you go. That means even more stiffness at high speeds, but it also means more comfort, because that additional spring and shock absorber gain another damper on each end of the car, with active bump and rebound dampening. Long story short: you have two types of active rebound systems on the car, and thus the best of the best when it comes to both handling and comfort.

We'll get to the interior in a moment, but one of the things that CvK highlights about the cabin is the shifter, and since this pertains to performance, we'll start here. It's kind of unique for a modern Koenigsegg to see a shifter, but it's not connected to any old gearbox. The nine-cog Light Speed Transmission features UPOD, or Ultimate Performance On Demand. What this means is that you change up and down a gear as you would with a regular sequential with one click back or forward, but a double-click of the shifter forward or back jumps you to the furthest gear from the one you're in - all without under- or over-revving.

As an example of how it works, CvK says that if you're in sixth gear at roughly 70 kph (about 43 mph), a double-click forward on the shifter would send you straight to third gear at 7,000 rpm in the same time that the gearbox would take to shift down to fifth or up to seventh. Instant performance indeed.

Finally, we can focus on the cabin. The seats are prototype units that are going to be changed for the production version, but we honestly can't spot even the faintest wrinkle in the leather or deviation in the stitching. In any case, the entire cabin is new and the doors are longer for easier ingress and egress. We suspect that Christian got tired of struggling to see out of or even get into his own cars, so the Jesko Attack can "fit really large people inside this car, comfortably." As you'd expect, even getting in is an occasion with these doors, but in the Jesko Attack, the proprietary hinge has been "twisted", allowing the door to move "outwards, forwards, and upwards" for better clearance. Another new patent in the bag for Koenigsegg.

As attractive as all the carbon is, things that really make this megacar stand out as special include the side airbags, clever storage pockets in the doors that won't drop all your stuff on the floor if you forget to close them and then open the door, and the fact that you even get two cupholders. The center bin has three USB-C charging ports, the passenger glove box opens via the screen and has space to charge your phones, and there are pockets behind the seats too. In addition, the evolutionary infotainment suite offers Apple CarPlay (CvK has previously said that Android Auto can be specced too), an upgraded sound system, navigation, and over-the-air (OTA) updates. That means that the infotainment system and all other electronic functions will always be added to and upgraded.

The magnetic key is again a stunning party piece and can be finished to match the interior of the car. Slimmer than before, it has remote functionality for the numerous cool tricks that a Koenigsegg can pull off, including Ghost Mode, which opens and closes the hoods and doors for a stunning display. As usual, you get the various track, wet, snow, and other driving modes, along with launch control electronic stability control, a nose-lift system, and the Gemera's SmartCluster instrument screen. This is attached to the steering wheel directly for a perfect view at all times, but Koenigsegg wants the self-leveling of the display to be a touch smoother still, so this will be further enhanced in the production car.

This Is No Ordinary Hypercar

That steering wheel is quite special. Despite the team removing all stalks and putting things like the lights, wipers, and turn signal indicator switches directly on the wheel itself, it's minimalistic. Remember when Ferrari first tried this with the 458 Italia? That manettino dial on the steering wheel made it so fussy that you'd indicate to turn when you wanted to hoot, and so on. None of that here - this is a stunning design that seamlessly integrates two small touchscreens with haptic force feedback and active graphics, but despite so much at your fingertips, it somehow looks clean and classy. Furthermore, it genuinely looks ergonomic.

The whole thing looks utterly spectacular, and you can't help but smile along watching someone like Christian von Koenigsegg speak with genuine passion and excitement, even when he's not driving the car and only talking about its technical details; this company looks like it's having fun. Koenigsegg Jesko Attack. What a name. What a car. What a time to be alive.

Electric Vehicles
China's New EV Is A 1,200-HP Hypercar On A Supercar Budget 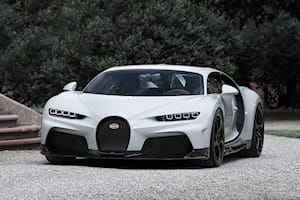