CarBuzz can confirm Nissan will unveil a redesigned Maxima in Detroit next year.

Following the unveiling of the sixth-generation Nissan Altima at the 2018 New York International Auto Show, attention quickly turned to Nissan's flagship sedan, the Maxima. Speaking to inside sources with intimate knowledge of the matter, CarBuzz can confirm that the car's 2020 redesign will be revealed to the world at the 2019 North American International Auto Show in Detroit next January. Expect new looks and a significant upgrade to the sedan's technology.

Nissan's knife work is expected to bring a sharper, brighter, and edgier face to the Maxima, much like the company's Vmotion 2.0 concept, along with new "wrap-around" taillights as seen on the 2019 Altima. Nissan has only recently begun testing the redesigned Maxima on public roads. A lightly camouflaged development mule was spotted running around for the first time earlier this month. Despite the confirmed delivery date, there are still many questions swirling around the forthcoming Maxima. Namely, will it continue to make use of Nissan's 3.5-liter 300-horsepower VQ V6 engine?

Keeping the engine would give the Maxima a more tangible point of differentiation over the redesigned Altima, which dropped the V6 option in favor of Nissan's 2.0-liter variable compression turbo engine, but now offers more interior space than its bigger brother despite the several thousand dollar price difference between the two. There's also the potential for Nissan to port over the Altima's heavily revised 2.5-liter naturally aspirated four-cylinder and offer Maxima shoppers a second powertrain choice. Same goes for the Altima's new all-wheel-drive system. Segment rivals from Dodge, Chrysler, Ford, and Buick all offer AWD options, albeit paired with V6 engines.

We do know there will be a significant upgrade to the Maxima's suite of safety and driver assist systems with the addition of Nissan's ProPILOT Assist which first debuted on the 2018 Leaf, before migrating to the new Rogue and now the Altima. There have also been rumors of a new Nissan infotainment system due to make its debut with the flagship Maxima, but our source remained mum on details beyond the 2020 Maxima's unveil date. "Many of your questions will be answered in Detroit." 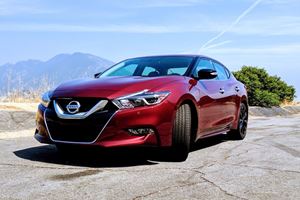