Fastest Minivans On The Planet

OEM minivans with 7 seats and sub-8 second 0-60 mph times - the kids will not be late for school again!

The current performance rage seems to be super-SUVs that move a family from point A to point B as quick as possible. But before the SUV craze hit the world as hard as it did, MPVs and minivans ruled the roost. Sure, you can still get minivans, but their popularity has dwindled substantially. Nevertheless, there were and still are some pretty rapid ones – for when the kids are late for school and what not. We've found the quickest 7-seater minivans of the bunch – family vans quick enough to potentially even give a hot hatch or two a run for its money.

The Dodge Grand Caravan is a master of versatility, packing features like 'Stow 'n Go' seating and space for up to 7 occupants, with luggage space available still. But for the purposes of this article, it's the engine that we're interested in – the 3.6-liter Pentastar V6 engine develops 283 horsepower, and drives the front wheels of the minivan through a 6-speed automatic transmission. That's enough grunt to get the Grand Caravan from zero to 60mph in just 7.9 seconds. The slowest on this list, but at under 8 seconds it's mighty impressive.

The Chrysler Pacifica may have come along to replace the aged Town and Country, and in doing so it's helped redefine the minivan segment as one that can stand the test of modern society. But, with upgraded safety, comfort, and a move towards being all things to all people, the Pacifica is slower than the model it replaces. Much like the Grand Caravan, the Town & Country featured a 3.6-liter V6 engine up front with 283 hp and front wheel drive. It even used the same 6-speed automatic transmission but was rated 0.1 seconds quicker from zero to sixty, with the figure resting at 7.8 seconds.

Did you know the Opel Zafira OPC was, and still is, the fastest MPV to have ever lapped the Nurburgring Nordschleife? OK, so not many manufacturers actually try for that record, but with a time of 8 minutes and 54 seconds, it's still respectable. Built by Opel's in-house tuning firm, the Opel Performance Center, the Zafira OPC was a seven-seater powered by a 2.0-liter turbo four-cylinder with outputs of 237 horsepower. It drove the front wheels through a manual 6-speed gearbox and could manage the 0-60 mph sprint in a claimed 7.4 seconds, though real-world testing often yielded times closer to 7 seconds dead. It was notorious for understeer, despite sports suspension, proving that the laws of physics can never truly be beaten.

Though the BMW 225i Active Tourer may be quicker, it only has 5 seats. The 220i Gran Tourer, however, packs a full 7, and powered by a 2.0-liter turbo 4-cylinder shared with the 3 Series it generates an impressive 189 horsepower. But it's not how much you have as what you do with it, and in the case of the 220i Gran Tourer it channels it all through the front wheels via an 8-speed automatic. OK, so it's not the rear-drive BMW we're used to, but the Gran Tourer will still clock 0-60 mph in 7.3 seconds, despite the power deficit over other models on this list.

Two Ford S-Max models could've made the list, actually, but as the most recent, most powerful, and the quicker of the 2, the S-Max 2.0 EcoBoost takes this spot. Replacing the old 5-cylinder, the new S-Max EcoBoost packs a turbo 4 cylinder with just 237 horsepower. The Focus ST-sourced engine drives the front wheels through a 6-speed automatic transmission and dismisses the 0-60 mph sprint in just 7.1 seconds – despite factory claims of 7.9 – while running the quarter mile in just 15.3. Spirited stuff from the Blue Oval, though not quite Mustang GT350 pace.

So you live in the US of A, have a family, but can't get past the thrill of acceleration? Well, the Toyota Sienna AWD is one of the options you need to look at then. The 3.5-liter V6 under the hood generates an impressive 300 hp but channeled to all-wheel drive it bags the Sienna a 0-60 mph time of just 7 seconds. Of all the minivans currently on the market, just one gets to the mark quicker.

Breaking into the sub-7 second range, the Honda Odyssey is a surprise package. The 2018 Honda Odyssey is marketed as 'The Fun Family Minivan,' racking up awards left, right, and center. With a base MSRP of $30,090 its great value too, and with sliding doors and huge versatility with the seats, practicality is up there with the best. It's 3.5-liter V6 engine up front develops 280 horsepower and 262 lb-ft of torque, and drives the front wheels through a 9 or 10-speed automatic gearbox. With the 10-speed gearbox, Motortrend recorded a 'blistering' 0-60 mph sprint of just 6.9 seconds, making it the quickest minivan on the market today.

The Mercedes-Benz R-Class was a strange thing. Mercedes built the minivan from the underpinnings of the ML-class SUV, which meant it featured all-wheel drive as standard, but also meant the R-Class was big and heavy. Fortunately, the mad scientists at AMG figured that if it was based on the ML, then a 6.2-liter naturally aspirated V8 could be shoved under the hood. It developed 510 horsepower, and through the efforts of a 7-speed automatic transmission, it propelled the massive R63 AMG from zero to sixty in 4.2 seconds. It was also massively spacious, and refined, owing largely to the US-spec long wheelbase. As far as production minivans went, the R63 AMG ranks as possibly the greatest of them all.

OK, so we cheated a little on this last one, but only because of the insanity of it. The Renault Espace F1 is only a four seater… and it's not really based on the production Espace either. But, it was developed in-house by Renault and celebrated 10 years of both the Espace and Renault's F1 exploits in 1994. The Espace revolutionized the minivan, but this particular concept fused minivan and Formula 1 car into one piece of insanity.

Using the carbon-fiber body of an Espace, but effectively the chassis of an F1 car – also made from carbon fiber – Renault was able to mid-mount a 3.5-liter RS5 V10 from the 1993 Williams-Renault FW15C F1 car. They dialed up the outputs to just short of 800 horsepower and used F1 running gear and tire technology to enable a 0-62 mph sprint of 2.8 seconds, 0-124 mph in 6.9 seconds, and a top speed of 194 mph. It even featured carbon ceramic brakes, and huge aerodynamic work to ensure it could handle and stop with some stability and efficacy. 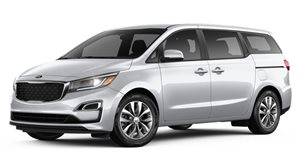