Some unsung heroes and some we should actually forget.

When it comes to legendary cars from a single brand, Ferrari may well have the longest list. However, an automaker doesn't deliver a long list of beloved cars without producing some either easily or best forgotten. Going back to the company's origins and Scuderia Ferrari started out as the racing arm of Alfa Romeo in 1929. Alfa brought its race team in house in 1938, hiring Enzo Ferrari as manager. He left Alfa in 1939 under the proviso he wouldn't use the Ferrari name on a car for four years. Technically, the first independent Ferrari vehicle was the 1940 Tipo 815 race car, and the first Ferrari badged car was the 1947 125 S, complete with a V12 engine. The last car Enzo Ferrari oversaw was the Ferrari F40 in 1988. Other legendary models include the 250 GTO, Spyder California, Daytona, Testarossa, 288 GTO, Enzo, and LaFerrari, etc. However, the following list is an ode to the cars that even the most ardent of Ferrari enthusiasts may have forgotten.

Sometimes described as the poor man's Daytona, the 365 GTC/4 was built from 1971-1972 at a much lower price point. It was also described as 'Il Gobbone,' meaning 'The Hunchback' due to its unusual silhouette at the time. We think the 4.4-liter V12 engine four-seater based on the GTB/4's platform has dated incredibly well, though. It has curves that have stood the test of time better than the much-coveted and collectible Daytona. Don't think it's a bargain basement classic Ferrari, though; they're currently going for anywhere between $150,000 and $250,000 and as high as $499,950 for a recent nut and bolt restoration.

For the longest time, Enzo Ferrari refused to build a mid-engined road car. The legendary coachbuilder Pininfarina, specifically Sergio Pininfarina himself or the company's director of design, Aldo Brovarone, decided that was a mistake. As a result, Pininfarina created the 1965 Ferrari 365 Tre Posti, which translates as "Three Places," or in this case, three seats. That means, long before the McLaren F1, the 365 Tre Posti boasted a central driving position flanked by two seats for passengers. Enzo Ferrari didn't sit up and demand Ferrari build a mid-engined road car immediately, but you can see some of the design influence in the Dino. It wasn't until 1973 with the 365 Boxer Berlinetta that Enzo finally saw sense and put the engine behind the driver in a road car.

The final V8 model developed under the direction of Enzo Ferrari was the Ferrari 348. Car And Driver's Patrick Bedard compared it to a truck, the GMC Syclone, and preferred the truck. "It was the turbocharged, all-wheel-drive, 280-hp GMC Syclone. But even the most extraordinary of pickups shouldn't be able to kick any Ferrari's butt. And that was the problem with the 348 - it was ordinary," Bedard wrote. And that's why it's one of the most forgettable models. When sellers try to unload them, they're often described as the balance between the old and new Ferraris with a howling V8 engine. However, a 348 with just 12,000 miles on the clock recently sold for $65,000. That's a lot of money in the real world, but it's peanuts for a mint condition classic Ferrari.

Lamborghini pulled off the styling for a mid-engined four-seater back in the day, and Koenigsegg has just done it in the 21st century with the Gemera. Ferrari completely failed, however. Somehow, it's even worse than its angular 308GT4 predecessor, but the Mondial stayed in production for 13 years. The body was by Pininfarina, but it never looked right and has not stood the test of time. Not helping it appeal to driving enthusiasts, the 3.0-liter V8 engine only made 205 hp and propelled the Mondial to 60 mph in a lethargic 9.3 seconds. Hagarty describes the Mondial as the most accessible Ferrari, but it's worth pointing out that the most accessible Lamborghini is a tractor. We found one for $16,039 and would rather drive that around a field than a Mondial on the road.

The 355GT4 somehow stayed in production for 17 years from 1976 and through two name changes. Save for the blatantly Ferrari wheels, it could easily pass for a stylish Japanese midsize coupe of the era. It's a sad affair with a Ferrari badge, though. This piece of Italian Stallion blasphemy continued in the drivetrain, with a 4.4-liter Colombo V12 matched to, of all things, an optional GM sourced Hydra-Matic 400 3-speed transmission for the 400 name change year. For those that care, it's the same transmission GM put in Cadillacs and trucks in the 1960s and 1970s. The Hydra-Matic 400 was an excellent durable transmission, but in a Ferrari?

What happens when you take a perfectly respectable Ferrari 308 and drop in one of the smallest displacement V8s yet made? You get the 208 GTB and GTS. It's powered by a 2.0-liter version of the 308's engine to avoid the tax Italy's government was putting on higher displacement engines at the time. Only a few hundred units were built from 1980-1981, and although they looked fast, the engine only developed around 150 hp. There was a turbocharged version that Ferrari likes to describe as "pioneering" that was "influenced" by the Ferrari 126C2 Formula One car of the time. However, it only made 215 hp compared to the naturally aspirated 308's 240 hp. The easiest way to tell a 208 Turbo from a 308 is to either watch the owner floor it and go nowhere fast, or look for the lower additional air intake at the rear. 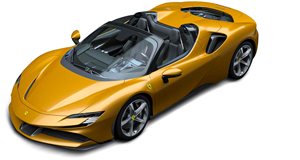 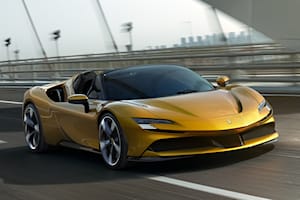 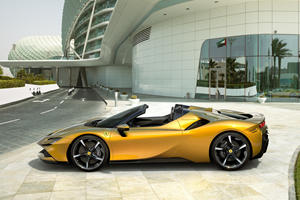