This luxury off-roader won't let you down.

As automakers ditch body-on-frame SUVs for car-based crossovers the 2020 Lexus GX quietly goes on offering capable performance and bulletproof reliability. Despite being (by far) the oldest model in the Lexus lineup, the GX manages to steadily sell around 25,000 of them per year. The GX is incredibly simple and reliable by modern luxury car standards and due to its high build quality, depreciates slower than any of its rivals.

The GX is currently in its second-generation, which was introduced way back in 2009, and a brand-new one starts off at $53,000. That seems a lot to spend on a car that hasn't been significantly updated in over a decade but if you are willing to buy a used first-generation model, you can get a much better deal.

The first generation GX, known as the GX 470, was offered in the US market from 2002 to 2009. Just like the current version, it was based on the foreign market Toyota Land Cruiser Prado, which is well-regarded as an off-road workhorse across the globe. In order to transform the Prado into a GX, Lexus upgraded the cabin with leather, wood trim, and technology features like navigation.

It still shared suspension components with the 4Runner though, ensuring that it could tackle off-road terrain. Lexus also added Adaptive Variable Suspension and Downhill Assist Control, which could bring the car down steep slopes automatically.

Even the newest examples of the GX 470 are more than a decade old now, so prices are very affordable. A small cult following surrounds these cars as a more opulent alternative to a 4Runner or Wrangler so low-mileage examples (under 60,000) can command over $20,000. Most examples fall well within the $5,000 to $15,000 range though, with the price highly dependent on mileage and condition. These cars are known to be among the most reliable luxury cars built in the 2000s but obvious wear and tear items should be expected when buying a used car that is out of warranty.

As the name suggests, all GX 470 models were powered by a 4.7-liter V8 paired with a five-speed automatic transmission turning four-wheel-drive with a low range. The V8 originally produced 235 horsepower and 320 lb-ft of torque but was later upped to 263 hp for the 2005 model year with the addition of variable valve timing. With a curb weight of 4,871 pounds, the GX 470 wasn't a quicker performer but it could crawl up steep inclines with relative ease thanks to an 8.3-inch ground clearance and good approach and departure angles. It was also quite adept at towing up to 6,500 pounds.

The GX 470's cabin is highly dated by modern standards but was considered luxurious at the time. Lexus gradually improved the technology with an updated navigation system and Bluetooth but the cabin design never changed much during the model's lifespan. To access the low range, for example, drivers use an old-school manual lever. An auxiliary input jack added on the 2007 model ensures you will be able to listen to your music in 2020 but pre-2007 examples still feature a built-in tape deck, which is also capable of running one of those nifty AUX adapters.

The GX 470 only came with two rows of seats as standard but a third row was available optionally, allowing space for up to eight passengers. It should be noted though that the third row is tiny by modern standards with just 24.9 inches of legroom. Having the third row in place limits cargo capacity to around 11 cubic feet but these numbers expand to 49.7 and 77.5 cubic feet with the third and second rows folded down. With an old-school V8 under the hood, expect poor fuel economy figures of 14 mpg in the city and 18 mpg on the highway.

If you are looking for an old-school off-road vehicle and the usual suspects like the 4Runner and Wrangler are not luxurious enough, the Lexus GX 470 should be on your shopping list. This forgotten luxury SUV will stand out on an off-road trail and keep you well-insulated on the drive home. It is also bulletproof reliable and holds its value better than most nameplates. The Lexus GX 470 is a used luxury SUV that you can depend on. 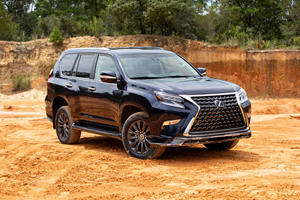 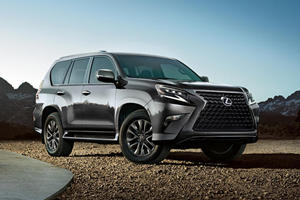