This is the best used car around.

When Hyundai spun off the Genesis brand into its own separate company, it took the Genesis and Equus models and rebadged them as the G80 and G90. We want to focus on the latter car, the Genesis G90, which exists as the flagship in the company's lineup and a competitor to the Audi A8, BMW 7 Series, Lexus LS, and Mercedes-Benz S-Class. The G90 has been on sale in its current form since 2017 and the car has just been given its biggest refresh yet for the 2020 model year.

We've already talked about how the Hyundai Equus and its corporate sibling, the Kia K900, are among the best value used luxury cars on the market. With the recent facelift of the G90, used examples have now become a bargain with many available for less than half the price of a new one.

The G90, at least before its latest facelift, was a pretty discrete sedan that wouldn't draw too much attention. If you were to take off its Genesis badge, those who don't know a lot about cars might think it was a Mercedes or a Lexus. But despite its rather nondescript nature, the G90 was (and still is) an excellent car. It offers stature matching the largest European luxury sedans like the 7 Series and S-Class with more affordable maintenance costs and a lower purchasing price. It may not have the brand prestige of a BMW or Mercedes but the G90 offers more luxury than most buyers will ever need.

Pricing for the 2020 Genesis G90 starts at a reasonable $72,200 for the twin-turbocharged V6 model. This might sound like a lot but it is actually around $10,000 less (or more) than most of its competitors from Europe. If you are willing to buy a pre-owned example, you could pay less than half as much.

We found 2017 G90 examples starting for less than $30,000. This is tremendous value for money for a full-size luxury sedan that's practically fully-loaded at any trim level. Not only is the car itself affordable, but the maintenance costs will be more affordable than many of the highly-depreciated luxury sedans in this segment.

Buyers will have a choice of two engines in the G90. The base motor is a 3.3-liter twin-turbocharged V6 producing a healthy 365 horsepower going out through an eight-speed automatic transmission. There is also a 5.0-liter V8 model which despite producing 420 hp, isn't any faster than the turbocharged V6. Buyers of the V8 will enjoy the sound of the motor and the prestige of having eight cylinders. That's it. All-wheel-drive is also available on either model with 0-60 mph taking around 5.3 seconds on either model. This car is more of a highway cruiser, built to offer comfort rather than straight-line performance.

Inside of the G90, drivers will be treated to a luxurious cabin filled with Nappa leather and high-quality wood. The buttons for the infotainment and climate feel a bit cheap compared to an S-Class but they function well and are simple to understand. The back seat is a particularly nice place to be, with V8 models including power-operated recline, heating and ventilation, audio controls, and sun shades. This cabin will make you feel like a CEO on a manager's budget.

Full-size luxury sedans are not always known for being the most practical and the G90 isn't a major exception to this rule. Most mid-size offerings offer greater practicality with folding rear seats but the G90's trunk still offers an acceptable 15.7 cubic feet of space. Fuel economy for the V6 model is rated at 17 mpg in the city and 24 mpg on the highway with AWD coming in with no penalty at the pumps. V8 models suffer by around one mile per gallon in each category.

If you're searching for executive-level luxury on a budget but don't want to roll the dice on pricey European car repair bills, a used Genesis G90 is the perfect car. It may not have the cool factor of a depreciated twelve-cylinder German car but when that car comes back from the dealership after a five-figure repair bill, you may be happy to have traded in some of the prestige. The brand-new 2020 G90 remains an excellent luxury bargain but a used example is an even better deal. 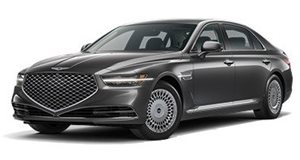