The most exclusive cars in Aston Martin's history.

Today, the name Aston Martin conjures up images of powerful, sophisticated, stylish automobiles. However, that wasn't always the case. Aston Martin was founded by Lionel Martin and Robert Bamford in a small workshop in London in 1914 to build race cars. The automaker's name is based on Martin's last name and a competition known as the Aston Hill Climb, where Martin and Bamford first found success with their self-built car.

The summer of 1914 wasn't a great time to start a new business, as on July 28 of that year, the first World War ignited. Following the war, Aston Martin continued to build race cars, but in the 1950s and 1960s, the company became known for its expensive grand touring cars. This was epitomized by the DB5 - the preferred car of choice for suave spy James Bond in the 1964 film Goldfinger - that started Aston Martin's cars down the path of becoming icons. Helping that iconic status has been some incredible special editions. Here are the best of them.

The Aston Martin One-77 first appeared at the 2008 Paris Motor Show under a shroud that Aston Martin called a "Savile Row tailored skirt." Nobody saw the One-77 until 2009, since when just 77 units have been built. It has won design awards and been in video games, but the real thing is still one of the most expensive Aston Martins around when it shows up at auctions. The styling is achingly sleek and beautiful, but under the hood is a brutally powerful upgraded version of Aston Martin's 6.0-liter V12 engine. The famed engine builder Cosworth was put to work and bored it out to 7.3 liters while also making it 25% lighter in weight. The naturally aspirated engine makes 750 horsepower and 553 lb-ft of silky smooth but relentless torque.

As the Vanquish entered the final phase of its life cycle, Aston Martin unleashed 175 versions of this ultra-cool special edition. The Vanquish S Ultimate was briefly available in three exterior color design themes and either Coupe or Volante body styles. The Ultimate Black paintwork with Copper Bronze graphics was, to us, the coolest way to order a Vanquish S Ultimate and came with an Obsidian Black leather interior with Chestnut Tan accents. The other combinations were Xenom Grey paint with Cobalt Blue graphics over Phantom Grey leather upholstery, or White Gold paint with warm Bronze graphics over the Chestnut Tan leather with Obsidian Black accents. Under the hood is Aston's naturally aspirated 6.0-liter V12 with 595 hp available to send to the rear wheels.

The most extreme Vantage out there is the track-inspired GT12 edition, but only 100 were made. A 5.9-liter V12 provided 595 horsepower and breathed out of a full titanium exhaust system, but its sprint to 62 mph in just 3.5 seconds was down to massive amounts of torque and the car weighing just 3,450 lbs. It was lower and wider than a standard Vantage, and also had the prominent rear wing and pronounced front splitter attached along with new suspension geometry and lashings of carbon-fiber.

In 1959, Aston Martin took a historic outright win in the Le Mans 24 Hours and built the DB4 GT race car. Only 75 were built between 1959 and 1963, and they command big money when they surface at auctions. In 2017, Aston Martin started building another run of 75 DB4 GT models using a blend of classic craftsmanship and modern techniques. They are even manufactured with carry-on VINs following straight from the last original DB4 GT. Just like the original, under the hood is a Tadek Marek-designed straight-six cylinder making 344 hp through a four-speed manual transmission and a limited-slip differential.

Zagato is a coachbuilding company based in Milan, Italy, that dates back a little further than Aston Martin. The companies regularly team up to produce a series of special editions. Only 325 of this run of cars based on the Vanquish were built, made up of 99 Coupes, 99 Volantes, 99 Shooting Brakes, and 28 Speedsters. That makes the Speedster the rarest, and it sold out immediately.

It's not just the body styles that make these Zagato cars special. Each of the body panels is made from carbon fiber, and the cars feature Aston Martin Vulcan-inspired 'Blade' taillights and repeat 3D Zagato 'Z' motifs on the grille and meshes. Through the range is Aston Martin's naturally-aspirated V12, but the adaptive suspension is fine-tuned for each model.

Aston Martin's Q department was commissioned to produce a limited run of V12 Vantage models inspired by the 1998 supercharged V8 Vantage V600 model. The new Vantage V600 was put together with the purist in mind and as little electronic interference as possible. Only 14 of what Aston Martin calls the "ultimate analog Vantage" were built. It features an upgraded version of the 6.0-liter naturally aspirated V12 engine making 591 hp matched to a 7-speed manual transmission. All the bodywork is carbon fiber and takes styling cues from the 1998 V600 model, while the suspension is also a significant upgrade featuring 3-stage adaptive damping.

It doesn't get more special than a 24 model run of a single car, particularly when that car is a track-only 800-hp 7.0-liter V12 supercar that costs $2.3 million from the factory. On top of a screaming great V12 engine, the 24 Vulcans also feature an F1-style pushrod suspension, and the monocoque and body are all carbon fiber, built to comply with FIA regulations.

Even more special are the models that have the AMR (Aston Martin Racing) package fitted. While there's no power added with the package, the gear ratio is shortened, and the downforce increased to give it an even more vicious edge.

The V8 Vantage Le Mans was announced in 1999 in celebration of the 40th anniversary of Aston Martin's victory at Le Mans. Production was limited to 40 editions of the car built during it's 'awkward' phase when the brand was owned by Ford. That might explain its Mustang like looks, but not the fact that it made an insane 608 hp and 600 lb-ft of torque if you opted for the 'Works Prepared' engine. The standard twin-supercharged engine made 550 hp in 1999, so it wouldn't exactly have been settling to stick with that.

At the time, the V8 Vantage was the most powerful car in the world, but for the Le Mans version, Aston also added Koni shocks, Eibach springs, stiffer anti-roll bars, new vents on the bodywork, AP Racing 6-piston calipers on ventilated discs, a new grille, and magnesium wheels.

The conception and launch of the DB7 Zagato might make it the most Aston Martin of Aston Martin cars. The idea was formed when then Aston Martin CEO Dr. Ulrich Bez and Dr. Andrea Zagato were having dinner at the 2001 Pebble Beach Concours event. They figured that a third-generation Aston Martin Zagato could be done, and Zagato's Chief Designer Nori Harad got to work, with the car coming into existence under Aston's then Director of Design, Henrik Fisker. The car's reveal then took place in London at the premises of the bespoke tailors Gieves and Hawkes at Number 1 Savile Row. By the time it was given a press launch, all 99 models slated to be built were sold.

Only 19 of the planned 25 1960 DB4 chassis were built at Newport Pagnell to be shipped to Italy for the body to be fitted by Zagato before being returned to the UK to be trimmed and finished. Amazingly, the bodywork was designed by 23-year-old Ercole Spada - he had joined Zagato as an apprentice in February 1960. In 1991, the two companies built four more DB4GT Zagato models, and another two in 1992. 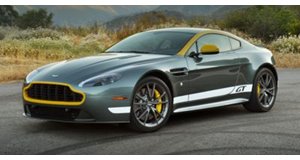