Here's How The Ford Explorer Timberline Stacks Up Against The Competition

These three-row off-roaders are as competent as they are roomy.

Off roading is done best with short wheelbase vehicles like the two-door Jeep Wrangler, new Ford Bronco, Mercedes G-Wagen or Land Rover Defender. They're better at fitting through tight trails both lengthwise and widthwise and all feature hardcore 4WD systems with locking differentials and low ranges. But all of them only have two rows of seats, which means you can bring five people at most for your next off-road adventure.

But American buyers want it all. They want off-road capability, though it's debatable how many actually use it; they want comfort the majority of the time; they want cargo space and they want room to bring the whole brood. That's why we're now seeing non-luxury full-size off road vehicles like the new Ford Explorer Timerbline and Jeep Grand Cherokee L. The recent Subaru Outback Wilderness almost fits the bill, but today we're looking at three-row SUVs with a penchant for going off road. We'll break down all the important specs of the new Timberline, Grand Cherokee L, Honda Passport - which might be a little outmatched here - and the reigning champion Toyota Land Cruiser (which may not be long for our shores).

The first concern when either hitting your local off-road park or honest-to-goodness trail is ground clearance. It measures the lowest point of the vehicle, usually at the differential, and it's a height at which you don't have to worry about logs or jagged rocks. In this group, the new Grand Cherokee L has a base ride height of 8.3 inches, which would put it on the low end, but with the optional Quadra-Lift air suspension it can go up to 10.9 inches, the best on this list.

The Toyota Land Cruiser comes in next with 8.9 inches, followed by the new Explorer Timberline at 8.7 inches, and the Honda Pilot at 7.3 inches. For the record, the smaller and two-row Outback Wilderness has an impressive 9.5 inches.

Approach, departure and breakover angles measure the angle at which you can safely drive (approach or depart) without scraping your undersides. Bigger is better, and it's a function of ground clearance and length. Here the stubby Land Cruiser takes the win, which can approach a 32-degree incline without issues and depart from a 24-degree hill. Breakover angle is the maximum possible angle that a vehicle, with at least one forward wheel and one rear wheel, can drive over without the apex of that angle touching any point of the vehicle other than the wheels. Imagine driving over a triangle, and then measuring the angle where it won't hit the underside of your vehicle. The Land Cruiser has 21 degrees of breakover.

The Jeep Grand Cherokee L, in its optional lifted position, has a huge approach of 30.1 degrees, though it goes down to 20.6 degrees in standard form. Its departure angle is 21.5-23.6 degrees and breakover is 19.2-22.6 degrees. The Ford Explorer Timberline is third here, with measurements of 23.5, 23.7 and 18.9 degrees (approach, departure, breakover). The Pilot, not a known off-roader, is last with 19.7 degrees approach and 20.8 degrees departure.

The reason the two-door Wranglers, Broncos, Suzuki Samurais are so good off-road is that they're short. If you've ever gone off-road in a full- or even medium-sized pickup, its an exercise in three-point turns to get around obstacles and tree trunks. So shorter and narrower is better. Here the Land Cruiser wins again with just 194.9 inches of length and about 78 inches of width. The Honda Pilot is next at 196.5 inches long and 78.6 inches wide. It's followed by the Explorer (199 inches long and 79 inches wide) and then the Grand Cherokee L, which is significantly longer and wider at 204.9 and 84.6 inches. The two-row Outback Wilderness is predictably shorter than the rest at 191 inches.

The last piece, and probably the most important, is the four-wheel drive system. All the entries have 4WD or AWD, but there are important differences. The Land Cruiser has a true, full-time four-wheel drive setup with a Torsen limited-slip locking center differential along with a two-speed transfer case with low range. The system works with the company's Active Traction Control using both brake and throttle to control wheelspin, as well is its multi-terrain drive modes.

The Jeep has three decades-proven options for 4WD: Quadra-Trac I, Quadra-Trac II and Quadra-Drive II, each more capable than the last. QT1 has a single-speed transfer case that can send power to either axle. QT2 has a two-speed case with low range, and QD2 has the two-speed transfer case, low range and an electronic limited slip differential. Quadra-Drive II is available on the Overland 4x4 model when equipped with the Off-Road Group, and standard on Summit models. It too has off-road drive modes for rocks, snow, mud and sand.

One of the few things on the Explorer Timberline that was untouched was its intelligent four-wheel drive system. It's really more like an all-wheel drive system in that it "automatically adjusts torque between (all four) wheels based on conditions and driver inputs to deliver the best traction - providing pre-emptive torque before wheel slip occurs." It too has a Torsen limited-slip that distributes power to the wheel with most traction, as well as drive modes for deep mud, trails, and snow and sand.

Finally, we have the Honda Pilot, the company's second most rugged vehicle after the Passport. It has an all-wheel drive system called intelligent Variable Torque Management that features true torque-vectoring. It's standard on all AWD models and uses an electronically controlled rear differential to send torque front, back and side to side. Honda says "the benefits are superior all-weather handling, and neutral, accurate steering under power." The same system in smaller Passport is excellent.

At this point, it looks like the Jeep Grand Cherokee L and Toyota Land Cruiser would run sandy circles around the other two, though we'll remind you that the Cherokee is by far the biggest of the group, making it a tight squeeze on small trails. But we still have to factor in price.

The Toyota Land Cruiser is a luxury car priced at $85,665. It has a ton of capability, maybe the most on this list, but is double the price of some others. The Ford Explorer Timberline comes in at $45,765, about $13K more than the base model. But it seems like a smart move as the company reported there's been a 56% increase in off-road use among its owners.

The base Jeep Grand Cherokee L is $36,995, but if you spec the Overland trim, which comes with all the off-road goodies, you're looking at about $57,000. If you add the optional Off-Road Package with the eLSD, skid plates and big wheels, which the Ford comes with as standard, you're adding another $1,095. The Honda Pilot is the cheapest of the group with a base price of $32,550, but all-wheel drive adds another $2,000 for a total of $34,550.

Right off the bat, we'll kick the Land Cruiser and Pilot off the list. The Land Cruiser is way more expensive than the rest, and the Pilot, besides its three-row configuration and all-wheel drive, would get left in the dust on trails the Ford and Jeep would conquer. So, it comes down to the two domestics.

The Jeep has a more rugged 4WD system and platform than the Ford, but it's also way bigger and more expensive. And the Explorer Timberline looks stellar with its deep green launch paint color and tall sidewall tires. For that, it's output and right size, we're giving the overall nod to Ford in this matchup.

We haven't driven either of these new players yet, but we will, soon. And we'll insist on a test that includes boulders, sand, mud and snow, depending on the weather. But it's Michigan, so it's all possible. 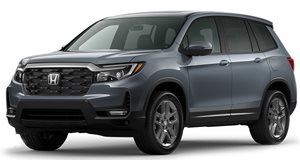