McLaren's hardcore hypercars battle it out.

McLaren is on the up - the supercar brand that just a decade ago didn't have a single car in production now has a full repertoire of 14 derivatives, with the new Artura hybrid on the way to make it 15. These range from the sedate to the downright criminally insane, but there are no two McLarens as crazy as the Senna and the newly-unveiled Sabre. Both are street legal, despite not really being built for the road. Instead, they're built to decimate lap times and be the best track car they can be. But in the battle of the Big Macs, which one reigns supreme?

The McLaren Sabre might be the newest model from the British manufacturer, but that doesn't mean it's all-new. No, it's actually based on the Senna, which means that, if you squint, the two share some similarities. Both are built with function in mind over form, which is why the garish wing and various winglets all over the body exist - they're sure as hell not for style. But to our eyes, the Sabre is a far better-resolved design. It's somewhat sleeker than the McLaren Senna, which looks closer to a Le Mans racer than it does a streetcar. The flowing lines and integration of the massive wing work better on the Sabre, and the revised front end looks less chaotic. While the long tail and various diffusers are still built for purpose, the limited-run Sabre is a far prettier hypercar.

Performance: Take It To The Track

The track is exactly where these supercars are intended to live their lives. Many will no doubt sit in hermetically sealed chambers that prevent even a speck of dust tainting their paintwork, but both are highly capable. With a carbon-fiber tub at their core, both are lightweight devils with similar curb weights of under 3,000 lbs. Both also share a twin-turbo 4.0-liter V8 engine mounted amidship, but while the Senna has 789 horsepower and 590 lb-ft of torque on tap, the Sabre has 824 hp and matches the Senna's torque. This makes it the most powerful non-hybrid McLaren yet. The supercar manufacturer hasn't made any bold acceleration claims, but considering the Senna sprints from 0 to 60 mph in under 3 seconds, we wouldn't be surprised if the Sabre is marginally quicker. It is faster, though, with a claimed top speed of 218 mph, a full 10 mph faster than the Senna and making it slower than only the McLaren Speedtail - the son of F1 itself.

Interior: A Carbon And Alcantara Affair

McLaren hasn't divulged too many details about the Sabre's interior but built by MSO, it has bespoke touches like more padded 'cobra-style' seats. Entry is gained by the same butterfly-style doors as the Senna. Unlike the latter, though, there aren't available glass panels in the doors, which makes the Sabre feel more claustrophobic. Both are wonderful displays of beautifully crafted carbon fiber and Alcantara though, with smatterings of both visible on just about every surface possible. As to which is better, the Senna is more fit for purpose, but the Sabre feels more exclusive and will likely be more comfortable to live with.

The McLaren Senna is considered a series production vehicle, although production will be limited to just 500 units globally. All are currently sold out, despite the fact that many of the 500 still haven't even been built. The Senna is expensive, too, with a price in the US of around $1 million, although customization will easily drive that figure even higher as no car leaves the factory in a stock manner. But the Senna is a common racehorse to the unicorn that is the Sabre. Just 15 Sabres are being built by MSO, and unlike the Speedtail that isn't road-legal in America, the Sabre is built exclusively for the US market. Each will be tailored to the customer's demands, meaning no two will be the same. McLaren hasn't divulged the Sabre's price, but you can bet that it makes the Senna look cheap. 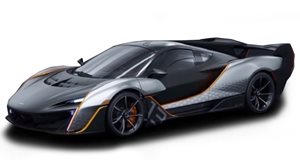