Is The Audi RS Q8 Worth The Upgrade Over A Standard Q8?

And are we missing out on the mid-level SQ8, sold outside the US?

Audi has finally revealed its first RS-branded SUV in the US, the RS Q8. Based on the Q8 SUV, the RS Q8 takes what is already a handsome vehicle and dials up the aggression with a more potent V8 shared with the RS6 and RS7 doing the business. Unsurprisingly, the RS Q8 is much faster than its standard counterpart. In fact, Audi has already claimed the SUV lap record on the Nurburgring, beating out its corporate sibling, the Lamborghini Urus.

Pricing has yet to be revealed for the RS Q8, but we expect it to start at around $120,000, meaning it will be roughly double the price of a base Q8, which starts at $68,200. This is a huge premium to pay for the added performance, which is why we wanted to break down the differences between the two SUVs and see if the RS Q8 is worth the price. And with such a massive price delta between the two, we wonder if Audi will offer the SQ8, which is only sold in Europe, in the US.

The Q8 was already a looker, so it really didn't need much help to attract attention on the road. This didn't stop Audi from going mad with the RS Q8's styling, adding an RS-specific radiator grille, wider wheel arches, a roof spoiler, a rear diffuser, and larger RS wheels. The result still looks like a Q8 but with much more aggression. Audi's bright green launch color doesn't hurt either. These styling tweaks don't just help the RQ Q8 look more aggressive, they also help keep it stable at high speeds.

The most significant change on the RS Q8 comes under the hood, where the Q8's 3.0-liter turbocharged V6 has been replaced with a larger 4.0-liter mill with two more cylinders and an extra turbo. Output leaps from 335 horsepower and 369 pound-feet of torque to 591 horsepower and 590 lb-ft of torque, dropping the 0-60 mph time from 5.9 to just 3.8 seconds. The top speed is also boosted from 155 mph to 189.5 mph with the optional RS ceramic brakes.

And it isn't just raw power where the RS Q8 sees an improvement in performance. It rides on a new adaptive air suspension with RS-specific tuning, which helps minimize body roll during hard cornering. To help the RS Q8 scoot around tighter bends and help it remain stable in the fast sweepers, all-wheel steering comes standard. We don't envision too many people taking their SUVs to the race track but if they did, the RS Q8 would easily wipe the floor with the lesser Q8.

Like the Q8, the RS Q8's cabin is a lovely place to sit. The overall layout doesn't change much with Audi's excellent Touch MMI infotainment system making a return here. There are some noticeable changes to the Virtual Cockpit gauge cluster though, as the RS Q8 gets the same retro-inspired graphics found in the RS6 and RS7 that can display g-force, lap times, engine temperature, torque readouts, and tire pressure.

Some of the materials have changed to distinguish the RS Q8 from its lesser counterpart. Carbon fiber trim adorns the dashboard and center console while sportier RS seats hug the driver more tightly. There is also a more aggressive, flat-bottom steering wheel with larger paddle shifters.

Even though the RS Q8 is geared towards performance, it hasn't been hindered as a practical SUV. Unlike other SUV Coupes like the BMW X6 and Porsche Cayenne Coupe, the Q8's roofline isn't as compromised, meaning it still offers a nice amount of room in the rear with ample cargo space. Audi says the RS Q8 will have identical cargo capacity as the standard Q8, meaning 30.5 cubic feet behind the rear seats or 60.7 cubic feet with the seats folded.

But What About The SQ8?

Is It Worth The Upgrade?

No matter which luxury manufacturer you look at, the highest performance version of a car is always going to cost significantly more than its base counterpart. With regards to the RS Q8, the performance improvements are massive compared to the Q8, so it certainly seems worth the upgrade if you want to have one of the fastest SUVs on the road. We still believe there is a market for a mid-level SQ8 though, which would offer a healthy bump over the Q8 without being as overwhelming. 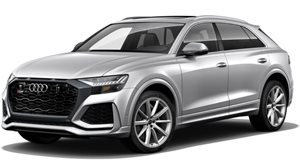