Japanese Police Cars You'll Want To Be Pulled Over By

Police cars to look out for when drifting your way down the mountains of Gunma.

Japanese police departments tend to use practical cars because being in the police service is a serious and practical job. However, for public relations exercises, Japanese police departments aren't averse to having something a bit special to show off or occasionally put into service. Occasionally though, they do actually use special cars on duty, including for trying to control Japan's well documented street racing and drifting culture. These are the Japanese police cars that you wouldn't be surprised at if one showed up in the rearview mirror with flashing lights blazing.

The police of Japan's Tochigi Prefecture was gifted the car that earned the GT-R the nickname Godzilla. The resident that gave the department the car is quoted as saying he "hopes the car is used for preventing traffic accidents." However, the amount of pictures of it out on the streets being taken by other motorists suggests it could just as easily end up causing one.

As a highway patrol car, the NSX actually made sense. Reliable, not too thirsty on gas, and not a car your average motorist is going to be able to lose before the helicopter shows up and starts directing their capture. In its day, it would have been the equivalent of German police driving an Audi R8 or British police driving a McLaren. It appears this NSX was actually donated by Honda to the Tochigi Prefecture and intended to chase modified street racing cars.

The FD generation RX-7 was chosen as a public relations vehicle by a police department in Japan. Probably because if it put in the number of miles a regular patrol car they would spend a large chunk of budget in oil and apex seals. However, there have been reports of FD RX-7s being used on patrol in Hiroshima, Kyoto, Niigata, and Tochigi.

We have to wonder if the cops that got to drive the rally-bred version of the Impreza as a police car took a few side turnings onto dirt roads as part of their patrols. Our favorite Impreza police car is still the one that showed up in Hot Fuzz, which reminds us that the director Edgar Wright also used an Impreza as the first hero car for Baby Driver.

The R33 Skyline used as a police car here is a rare bird indeed. The limited version built by Autech had four doors which would have made it more useful for picking up miscreants and thieves. It belongs to Kanagawa prefecture and although the name Autech sounds like it may be German, it's a Japanese tuning company based in Chigasaki that specializes in Nissan cars. They also tune Nismo engines for race cars in Super GT racing.

Three 350Z Nismo cars were actually used for working duties in the Tokyo Metropolitan Police Department's High-Speed Patrol Unit. While it makes for a striking and reliable pursuit car, the questions we have is: where do you put them if you actually arrest someone and just how much negative effect on aerodynamics does that light-bar have? Most importantly though, would it be able to actually catch DK?

All-wheel-drive, all-wheel-steering, twin-turbo engine, active suspension. What could possibly go wrong? Well, quite a lot it turns out, and the 3000GT was also a heavy beast. While it was a big swing and one hell of a car, the idea of it being in service sounds like a costly affair.

The range-topping VR4 trim of the Gallant was in service with the Ibaraki police in Japan. This was the car built for Group A rallying but was superseded almost immediately by the Evolution and became Mitsubishi's showcase car for its new technology instead. VR4 stands for Viscous Realtime 4-wheel-drive and the twin-turbo engine could accelerate the Gallant to 60 mph in 5.7 seconds and, with the regulator disabled, the 8th generation had a top speed over 150 mph. Looks like a smart choice for a police car to us. 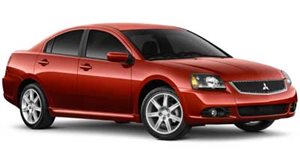