We break down the details of Jeep's next smash hits.

After presenting the Grand Wagoneer Concept late last year, Jeep has now released two new models that will act as full-size flagships in its lineup. The 2022 Jeep Grand Wagoneer will be joined by the 2022 Jeep Wagoneer, and while speculation originally was that they would be differentiated by two- and three-row seating configurations, this has proven not to be the case as both ship as large 3-row SUVs. So what does the "Grand" add to the Wagoneer?

The Wagoneer to Grand Wagoneer relationship is more akin to the GMC Yukon to the Yukon Denali. Both vehicles are virtually identical in size, so the main differentiator here is luxury. Here's everything you need to know about the Jeep Wagoneer and Grand Wagoneer.

Much like the GMC Yukon Denali, the Grand Wagoneer is essentially a more blinged-up version of the standard Wagoneer. The Wagoneer features LED headlamps, fog lamps, accent badging, and a standard sidestep, while the Grand Wagoneer adds a two-tone effect with a black roof, new hood, blingy front-end and grille, premium LED lighting, fender flares, and power-retractable side-steps. Each model rides on 20-inch wheels as standard, but 22-inch wheels are available. A Grand Wagoneer Obsidian will arrive later on, featuring a blacked-out exterior.

Interior: How Many Screens?

There are two key differences between the Wagoneer and Grand Wagoneer in the interior; screens and materials. The Grand Wagoneer includes up to 75 inches of screen area, while Wagoneer offers a still-impressive 50 inches. Both models receive massive touchscreen infotainment systems and digital instrument clusters (with the Grand's being a bit larger), but the Grand Wagoneer adds a lower comfort display for the climate controls plus a 10.25-inch passenger display. Both models boast a rear entertainment system in the middle row with the first application of Fire TV for Auto, allowing passengers to watch TV and movies.

Both models boast nicer cabins than we've seen from Jeep in the past, but the Grand Wagoneer is clearly the more luxurious of the two. This model includes a knurled start button surround, French accent stitched leather, carved wood or metal trim, and liquid chrome HVAC bezels.

These new models both feature V8 power under the hood, but the two engines are quite different. The Wagoneer comes standard with a 5.7-liter Hemi V8 paired with the eTorque mild-hybrid system used on the Ram 1500. This engine produces 392 horsepower and 404 lb-ft of torque, making it much more potent than the 5.3-liter V8 base engine found in the Chevrolet Tahoe and GMC Yukon. Thanks to the eTorque feature, the stop-start system feels smoother, and the engine is slightly more efficient.

Competition: Gunning For The Big Boys

Speaking with Jeep during a briefing for the Wagoneer and Grand Wagoneer, CarBuzz asked about possible competitors. While the company's executives joked about having no direct competition, they eventually tossed out the GMC Yukon, Cadillac Escalade, and Lincoln Navigator as a few obvious benchmarks, excluding less luxurious Chevrolet Tahoe and Ford Expedition from the list. It's not a one-to-one comparison, but the Wagoneer should compete with the GMC Yukon while the Grand Wagoneer challenges the Cadillac Escalade and Lincoln Navigator in the luxury segment.

Just like the competition, the new Jeeps offer seating for up to eight adults, or seven if buyers select the second-row captain's chairs. The Wagoneer twins offer 179.2 cubic feet of overall passenger volume, which is more than the Ford and GM alternatives, even in their extended forms. In terms of dimensions and storage space, the Jeep models split the difference between the standard Yukon, Escalade, Navigator, and the larger Yukon XL, Escalade ESV, and Navigator L.

Pricing between the Wagoneer and Grand Wagoneer is pretty wide, covering the distance between the premium GMC Yukon Denali and the luxurious Cadillac Escalade. The Wagoneer Series I starts at $57,995, making it pricier than a base Yukon ($50,700) but less expensive than the Yukon Denali ($66,900). At the higher end, the Wagoneer Series III Off-Road tops out at $86,665 - fully-specced - placing it above the Escalade's $76,195 starting MSRP and Navigator's $76,185 MSRP and a bit higher than a loaded Yukon Denali.

The Grand Wagoneer breezes right past the Escalade and Navigator with an $86,995 starting price for the Series I model. Pricing reaches $107,980 for Series III when fully kitted in Premium guise, and Jeep says this model can crest $111,000 with options. It may sound like Cadillac and Lincoln hold the advantage here, but the Escalade and Navigator can each reach around the same price in their top trim levels. Jeep will bring new competition to the full-size SUV segment, and we look forward to seeing how this category heats up. 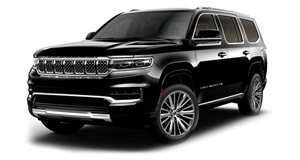 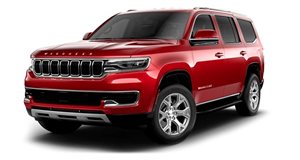 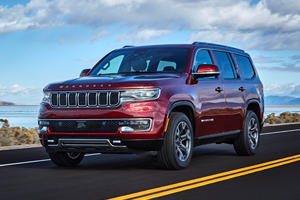 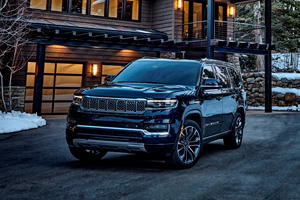