It's a beast on the road and off, and barely makes sense, but it's fun.

It's really easy just to yell "more power" every time someone says, "how do we make this car better?" But that really misses the point. As we've said before, it's not always about speed, but the sensation of speed. Doing 85 mph in a BMW 8 Series feels like nothing. Do it in a Miata and it's a little hairier. Do it on a motorcycle and (at least for the inexperienced) it feels like twice that speed. But the thing about the Wrangler is that, it did need more power.

Not for going off-road, although, it's fun there too, but to make this car laugh-out-loud funny to drive, day in and day out. Between the actual motive force, the sound, and the sights of things moving by at 60 mph in 4.5 seconds, the Jeep Wrangler Rubicon 392 makes perfect sense, for insane people, which we are.

So we'll start there. This is the first time a Wrangler has featured a V8 for forty years, and this one is a far cry from the 5.0-liter, 125-horsepower Malaise Era eight in the 1981 CJ Jeep. This doesn't just get the 5.7-liter Hemi, though we've seen a few concepts with that. Instead, it shoehorns the massive 6.4-liter making 470 hp and 470 lb-ft of torque.

On startup, it sounds hilarious, even in the quieter modes. If you leave it with the exhausts fully open, that's how it'll start up. And that means waking the kids, the neighbors and small animals every time you turn the key. The same thing happens when you floor it; this thing seriously sounds like a Dodge Challenger Scat Pack at full tilt.

With that kind of power and torque, anytime you push the pedal this Wrangler will leap forward after squatting down. It'll run to 60 mph 4.5 seconds, which is Ford Mustang GT times. Top speed is immaterial, considering you never want to get close. At expressway speeds, driving a kite can get pretty dicey; it reacts to wind, and semitrucks passing in the other direction. This is a two-hands-on-the-wheel kind of car. It feels a little dangerous, and that's why we like it.

So the current generation of the Wrangler is so much better than the old one, in every way. Inside the cabin, where you'll spend most of your time, everything is oversized. Not the screen, of course, this is a Jeep after all. But the volume and tuning knobs, climate buttons, gear selector and four-wheel drive selector are all chunky, and easy to grab with gloves and without looking.

It has all of the modern conveniences including the touchscreen with the Uconnect system, which is better than it ever has been. It has Apple CarPlay too, with media inputs covered by flaps to keep the dirt out. Paddle shifters can be used to switch gears and new drive modes can be selected at speed. Leather, heated seats are standard as is navigation and a special off-road screen noting pitch, roll, altitude and more.

The thing about the Wrangler 392 is that it doesn't look that different from a regular Wrangler. If you took the hood off (you wouldn't want to, it has special air intakes), that would get rid of that Ram Air snout, and the 392 badges. It mostly looks like a regular jeep after that.

Our tester had the hardtop with the rollback sardine part, which we think is the best way to go. The full soft top is way too loud, and seems to catch wind even more than the hardtop, but with the rollback option you get the best of both worlds. And those 33-inch off-road tires are standard with 17-inch dark beadlock wheels. The only other real giveaway is the dual exhaust, and of course the ruckus that this thing makes when driving.

So here's where the problem lies. The 2021 Wrangler Rubicon starts at $74,640. That's more than double the price of the base model. For that price you could buy the Hellephant engine, pay someone to swap it in and have more power than this 392. However, once you start doing stuff that like, whatever happens is on you. No, with this hot-rod Wrangler you get factory engineering, a factory warranty, and a powertrain that's been proven for a decade.

Having just driven the Mercedes G-Class, it was hard not to compare the two. They both have off-road chops and lockers all around, they both have V8s and both are hilarious and dangerous to drive. But the base model of that, which has less power than this, starts at more than $130,000. So, there's really no comparison there. There's really no comparison anywhere as this vehicle is some unholy marriage of muscle car and off-roader, and we're not sure anyone has done that before, without using a pickup truck as a base. If you want an off-road setup that's like no other, Jeep knows where you can send the check. 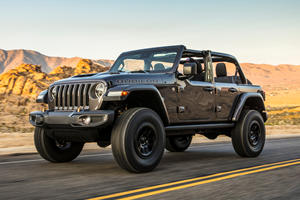