Things could have been a lot different for these famous automobiles.

Designing anything involves a varying degree of trial and error. When it comes to something as large and complex as a car, it's a refinement process. Form is defined to a large extent by function, both in how the vehicle is to be used and the powertrains and features required by the brief. For example, powerful sports cars typically have a long hood for the large engine and trucks and full SUV's tend to be boxy as a box allows the most space for storage and passengers. Nowadays, legislation has a huge effect on how vehicles look and has affected some of the defining aspects of different kinds of vehicles. Pedestrian safety, roll-over safety, lighting, front and side impact safety all has to be rolled into a design. Ian Callum, most famous for his work with Jaguar and Aston Martin, recently mentioned that the only real place on a car left for a designer to get truly creative is the back.

But getting a car to look right has always been a process, and that means designs get rejected for all sorts of reasons. These are some of the most interesting ones.

Opinions are divided on the Mustang II but, love it or hate it, part of the reason the Mustang survived is that Ford's president at the time, Lee Iacocca, wanted the second generation to be fuel efficient. It was a prescient move because just a few months after the Mustang II went on sale the oil crisis hit hard. Some of the design suggestions were weird, and one looks like a direct rip off of the Chevy Monza, while another looks pretty damn cool and may have been a better choice aesthetically. For reference, the first image is the final design.

There are very few images available of the C5 Corvette designs that were rejected, but this one has escaped into the wild. According to lore, this particular design was rejected as the rear was too radical. The interesting thing is it appears to have been referenced heavily in the design of the C7 generation Corvette and, in particular, the four centrally mounted exhaust pipes and the angular 'hips'. For reference, the first image here is the rejected C5 design, and the second is the C7 generation Corvette.

As the new century began, proposals for the big rebirth of Ford's Mustang started to take shape. Initially, a lot of designers tried to combine the early, classic, Mustang shape with Ford's New Edge design language, and ended up with something clunky or that simply wasn't sleek. After taking a big step back, the design team picked out key elements from the original Mustang and applied the 2-2 fastback profile with the forward leaning grill, deep-set headlights, and the tri-bar taillights to create something retro-futuristic under the stewardship of J Mays, a man noted for doing the same thing with the Volkswagen Beetle and the rebirth of the Ford GT.

Chevy struggled to bring back the iconic pony car after the fourth generation, to the point CEO Rick Wagoner pulled a concept from the auto show circuit in 2005. Ford was showing that retro styling could be done, and Wagoner instructed his design team to be more subtle with the throwback visual design cues, and something beautiful was born. Thankfully that 1990's idea of a futuristic grill was dropped.

The W140 generation was a defining moment of the S-Class. People use the term "over-engineered," but that's an often misused term that doesn't mean what people think. The W140 wasn't overladen with features or too complicated, it was exquisitely engineered. Sure, it was a giant of a car but it doesn't feel it to drive a well-maintained one, even now. Its design process was painstaking, and there were numerous aesthetic designs proposed. Some were not great, and would have aged a lot worse.

This is more of a design that died with a company rather than one that was rejected. This is what Jason Castriota was doing with Saab 9-3 in 2011 after being hired just a year before the brand became defunct. A new platform was planned, and the 9-1 and 9-3 were going to be aimed at a younger demographic. Saab was planning to take the 9-3 back to its hatchback roots, and even more heartbreakingly, there was a planned 2-door sports coupe called the Sonett that would have been slightly larger than the Audi TT and powered by a 400-horsepower engine.

We can see what the design team was thinking by keeping the general theme of the 911 but making it contemporary for the time and giving it an extra light on each side at the front. There's not much else to say about this one, except that it would have been a terrible looking car and, thankfully, cooler heads prevailed.

What you're looking at in the pictures below is the redesigned DB7 that saved Aston Martin after Ford purchased the brand. However, there's quite a story in how it came to be. Jaguar was trying to get a car codenamed XJ41 to the point of production before they took one look at the bloated budget and killed it outright. The legendary race car driver, team owner, and a man heavily involved with Jaguar, Tom Walkinshaw, saw disaster was coming and dug into his own pocket to commission Ian Callum to adapt the XJ41 body onto the XJS chassis, then pitched the design back to Jaguar. It was a quick and incredibly cost-effective solution that Jaguar promptly rejected.

By now, Jaguar and Aston Martin were owned by Ford, and Ford had little interest in Jaguar based on its history of lacking profits. So, Walkinshaw took Callum's XJS-based coupe to Aston Martin without mentioning it to Jaguar and told Aston that was the car that would save them. It did, and it was a work of genius with Callum raiding every Ford owned parts bin he could and using things like the rear lights from a Mazda 323 and indicators from the MX-5. When he couldn't find cool enough door mirrors, the got them from Citroen's CX-5 because they were cheap. 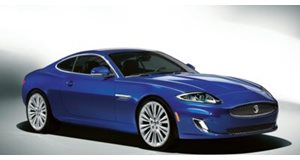 First Drive
2021 Mercedes-Benz S-Class Sedan First Drive Review: The Pinnacle Of Luxury
If you have the means, the S-Class is worth every penny.