Because nothing looks sleepier than a crossover.

The first factory sleeper car is probably the Chrysler 300C, which packed a 5.4-liter FirePower V8 and sold as a luxury vehicle for Nascar homologation purposes. In the UK, a sleeper is often known as a Q-car and dates back to 1956 to describe an unmarked police car. It became a more common term in the 1960s when a journalist described the Lotus modified Ford Cortina as a Q-car. That term derives from the British Navy's Q-ships, which were merchant ships containing concealed weaponry. In contrast, the term sleeper derives from the idea of a sleeper agent - someone who fits in surreptitiously into their surroundings until activated as an asset.

In the modern automotive era, nothing fits into traffic more surreptitiously than a crossover. It's rare for a crossover to be fast without having a ton of extra body styling and badges, though. However, a few have slipped through the net and don't declare too loudly just how much power they're hiding.

Although it was killed off in 2017, the Infiniti FX50 was a modern marvel. What we're looking at here is the second generation, which had an optional 5.0-liter V8 instead of the standard 325-hp 3.7-liter V6. They are rare, but if you can find a V8-powered Infiniti FX50, then you'll also find 390 hp at 6,500 rpm and 369 lb-ft of torque at 4,400 rpm, all wrapped up in an unassuming shell of a crossover. The weirdest thing about the engine is that it's derived from the LMP3 race car engine, which produced 420 hp and, as far as we can tell, can't be found in any other production car.

The Touareg Hybrid looks like any other Touareg, with the hybrid badge just adding to its disguise. It may be a hybrid, but this is certainly no Prius, as matched with the electric drive system is the same supercharged 3.0-liter V6 found in the Audi S4 and S5 of the same model years. In total, the drivetrain made a total of 380 hp and 428 lb-ft of torque. It was recorded with a zero to 60 mph time of 5.9 seconds, which is fast enough to still give many cars a shock from the lights.

If you have a family or have to carry a lot of gear around regularly, the Ford Flex is a solid choice as a sleeper. In 3.5-liter V6 EcoBoost Limited trim, it'll sprint to 60 mph in a surprisingly spritely 5.7 sec and run the quarter-mile in 14.2 seconds at 100 mph. While you may not be taking on everything you see at the traffic lights, you have the ability to then pack it with kids and gear for a weekend road trip. To sweeten the pot, the Flex is not going to be in production much longer, and Ford is heavily discounting the crossover at the moment.

If you want more power, then it has been open season on tuning the 3.5-liter V6 EcoBoost for some time now. We wouldn't blame anyone for considering the stock 365 hp and 350 lb-ft as a starting point.

There was a time when Subaru turbocharged everything, and that included the usually benign Forester. If you can find one in good condition that hasn't been messed with by a tuner, then its time to wear a plaid shirt, give your hair a side parting, put on some hiking boots, and scare the dog with the responsive 210 hp and 235 lb-ft of torque from the boxer engine. With a manual transmission, the Forester 2.5 XT is capable of a 5.3-second sprint from zero to 60 mph. For a frame of reference, that's close to a full second faster than a Subaru BRZ.

The Chevy Trailblazer was replaced by the Traverse, but we don't expect the Traverse to ever pack the punch of the Trailblazer SS. Along with the upgraded suspension, thicker front rotors, polished 20-inch wheels, and some SS badges, the Trailblazer SS packed the C6 Corvette's 6.0-liter LS2 V8 under the hood. No side skirts, no aggressive aero parts, and nothing other than the SS badges to show the driver has 390 hp and 400 lb-ft of torque at 4,000 rpm at their disposal. Once the Chevrolet Trailblazer SS gets going, the burble from the engine turning into a howl is a giveaway, but by then, anyone trying to keep up is already watching it get smaller.

The Trailblazer name is slated for a comeback for the 2021 model year, and so far, there's no mention of an SS model, but the fact there is an RS model gives us hope.

Mass production of the ML63 AMG started for the 2008 model year, but 2007 saw a limited edition rocking a hand-crafted 6.2-liter V8 engine making 502 hp and 465 lb-ft. It could clear zero-60 mph in just 4.8 seconds and made it the most potent naturally aspirated SUV in the world. Following that, AMG switched to a 5.5-liter V8 biturbo engine that, in 2011, made a glorious 550 hp and 560 lb-ft of torque with the optional Performance package.

It's amazing that someone actually vocalized the idea of putting a V10 turbodiesel engine in a Touareg V10 TDI. It's even more surprising that it actually happened. The twin-turbocharged engine produces 310 hp and a massive 553 lb-ft of torque if you can still find one. It was only built in 2004, 2006, 2007, and 2008, and if you were to buy one, you could probably tow your house into a different zip code with it. There's a video that pops up on YouTube once in a while of a Touareg V10 TDI schooling a heavily modified and lifted heavy-duty Chevy Silverado. Without a load to tow, though, there's nothing that quite compares to the surge of a V8 in a mid-sized crossover taking you to 60 mph in 6.2 seconds and running a 14-second quarter mile.

We've seen some oddball crossovers on the list, but the Saab 9-7X Aero is our favorite. GM had a full stake in Saab before the brand disappeared, and the 9-7X Aero was built on the General Motor's GMT 360 SUV platform. That's the same platform the Trailblazer was on, and 9-7X Aero was, effectively, an upmarket version of the Chevrolet Trailblazer SS. That means it wore a Saab badge, but under the hood was the same 6.0-liter LS2 V8 making 390 hp and 395 lb-ft of torque. It also made it the fastest Saab you could buy. Sadly, but not unsurprisingly, only 500 or so were sold in its two years on the market. 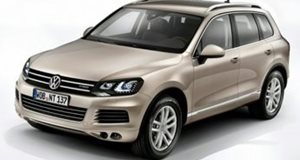