Two of the most accessible and most enjoyable sedans go head to head.

We've just seen the reveal of the all-new Honda Civic Si, and it looks like a great car with loads of fun in store for enthusiastic drivers. Sure, some people will argue that it should have more than 200 horsepower, but if you're one of them, this car is not for you. Honda has engineered this to be a car that you can not only drive daily but can abuse daily. Its power is now more evenly spread, and it encourages you to chase more revs, making for an engaging and fun drive even at lower speeds.

Remember, it's more fun to drive a slow car fast than to drive a fast car slow. But the internet trolls have a point - the 228-hp Volkswagen Jetta GLI could make the Civic Si look dull. Will it? Let's find out.

Let's be honest. From the front, the new Civic Si looks almost identical to the regular Civic that your grandma will be using to buy wool and knitting needles. Besides a mildly altered front bumper and slightly different mesh design for the lower grille, the Civic Si looks pretty pedestrian.

There are gloss black accents like the mirror caps, rear spoiler, and 18-inch wheels, but you'll have to stare at the new rear bumper with its twin-exit oval pipes to really feel like this is a different model. Then again, do you really need to dramatically alter the styling when the Civic Si gets access to a gorgeous and exclusive paint finish like Blazing Orange Pearl?

The Jetta GLI is much more obviously a performance car. Its front and rear fascias are completely different from those of the regular Jetta, with the former boasting that red stripe and honeycomb mesh grille inspired by the Golf GTI. The rear of this car has been redesigned too, gaining a new faux diffuser and GTI-typical twin-exit exhaust tips. The 18-inch alloys you get here are also much bolder, but you do have to spec the Black Package to get access to darkened accents for the mirror caps and trunk spoiler.

This also adds a black roof, but even without those upgrades, we have to say that the Jetta GLI looks far more sporty and upmarket without looking like it's trying too hard. Some will love the restrained approach of the Civic Si's styling, and I'm one of them, but do you really want to have to explain to your mates that you're in the sportier version every time they see your car next to that of a pensioner?

Stepping into the Civic Si, you're greeted with body stabilizing sport seats, a metal honeycomb dash with Si-specific red trim accents, and metal sport pedals that match the finish of the gear-lever. But while the exterior design is rather dull, the seats have been styled in a very in-your-face type of way.

A checkered black-and-red theme contrasts heavily with the otherwise restrained black leather and red stitching combo that also features some carbon-like trim elements. With a nine-inch touchscreen infotainment display and a 12-speaker Bose sound system as standard, it's a decent overall package, but we can't help but feel that screen looks like a bit of an afterthought.

The Jetta's interior design is far more classy and far more resolved. Here too, there is a theme of black and red, but this car executes the idea far better, with a driver-centric dash housing two screens. Ahead of the driver is a 10-inch display, and to the right of that is the MIB3 infotainment display with a BeastAudio premium sound system. You also get ambient lighting to change the mood if you don't like red, and you get metal sport pedals just like in the Civic Si.

However, we're not impressed by the haptic controls on the steering wheel, and there's far more cheap and nasty plastic in here than we'd like. Sure, other, more premium materials feature too, but on balance, we'd call this one a tie. At least both cars use physical knobs for volume and climate controls.

The Civic Si's 1.5-liter turbo-four produces 200 hp and 192 lb-ft of torque, the latter of which is available from as low as 1,800 rpm all the way to 5,000 rpm. A new dual-coil silencer enhances the noise you get when rowing through the gears, although some of this pleasure is ruined by artificial noises that are pumped through the speakers.

Still, with a lighter flywheel, throttle response has been drastically improved, and the six-speed manual gets 10% shorter throws and a more rigid shift lever mounting bracket for those gorgeous notchy shifts that make a manual so fun. A rev-matching system has been borrowed from the Civic Type R too, but this can be deactivated. The steering, springs, and torsional rigidity of the body have all been re-tuned too, offering better handling than ever.

The Jetta also gets a six-speed manual gearbox as standard, while those who don't want to use their left leg at all can opt for a seven-speed dual-clutch DSG system. Combined with a VAW electronic limited-slip differential, the 2.0-liter turbo-four under the hood makes the most of its 228 hp and 258 lb-ft of torque.

Although neither company has published performance figures, it seems pretty obvious that the Jetta GLI will win every drag race, but with Honda's penchant for outstanding chassis design, we've got a feeling that the Civic Si will remain the benchmark for handling enjoyment. The Jetta GLI comes with adaptive suspension though, so we'd go for the VW if you want a more comfortable daily driver that can still be a blast to drive. As an all-rounder, the Jetta GLI will be better, but the enthusiast will almost certainly have more fun in the Civic Si.

Neither automaker has yet announced pricing for their latest sporty sedans, but the 2022 Civic Si is unlikely to be much pricier than the old model that started at $25,200. The Jetta GLI does away with its entry-level S trim for the 2022 model, so you have to get the full-fat Autobahn trim, which previously cost a little less than $31,000. With such a big gap in pricing, we feel compelled to recommend the Civic Si, at least on paper until we get to drive both. The Civic Si is expected to hit US dealers later this year, which should coincide with the GLI's fourth-quarter release.

Ultimately, we feel that Honda went too far with the styling of the last Civic and not far enough with this model, while the Jetta remains a car that you can feel comfortable in no matter how affluent the neighborhood. We also feel that a little more power wouldn't go amiss, but overall, the lower price point and likely superior driving engagement mean the same things they always have. Buy the Jetta to be comfy and fast in a straight line, but if you want to save a few bucks and really enjoy taking corners, have the Civic Si. 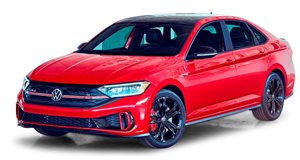