The 2023 Porsche 911 Dakar Is A Massive Missed Opportunity

Why isn't it going racing?

Last week, Porsche finally announced the 911 Dakar, making the entire CarBuzz office jump with joy. We've been big fans of the 911 Safari trend since it became a thing, and Singer's version was undoubtedly the best until Porsche came along and announced that you could buy an off-road-ready 911 straight from the factory.

To some, it's a stupid idea. Why give the most iconic sports car of them all a lift? Because there's a genuine motorsport connection, and that makes all the difference. A lifted Aston Martin V8 Vantage would be stupid, but because Porsche competed in the Paris-Dakar Rallye with the 911, there is historical context. Therefore it should be allowed to exist.

But there are some problems.

The number one downside we've been able to spot so far is that we had hoped the 911 Dakar would be a permanent addition to the range, much like the other motorsport-inspired model, the GT3. Alas, only 2,500 models will be built, and we're dead certain all of them have been scooped by now.

On the eve of its debut, not all had been sold, but judging by the response from the online community, they're certainly all gone. In an exclusive interview with Porsche, CarBuzz discovered why it is a limited edition car. We were told that if there is enough interest, it'll build more in a few years. But for now, it's gone, which makes us sad for two reasons.

The main reason we love Safari 911s, and Porsche's official version, even more is that it allows you to act like a bit of a loon on the last unchecked pieces of road in the country. Gravel roads have speed limits, but when did you last see a police officer patrolling a quiet gravel road? If you own a large piece of property, even better. You can do a fence check at your ranch at 104 mph. Sure, you could also buy a Raptor, but ranching with a 911 hits different.

And don't think it can't. This car was put through hell during its developmental testing. It went from hot to cold, was jumped a thousand times, and the famous Walter Rohrl drove it sideways on ice, pulling the kind of angles we noobs can only ever hope to achieve.

It was built for fun. That much is clear from the official press photos. Porsche wants you to go sideways, which is the slowest and most fun way around a corner.

No One Wants To Damage An Appreciating Asset

But that brings us to another problem: these cars won't be used for their intended purpose. The 911 Dakar launched with a reasonable MSRP of $220k; you'll never find one at that price again. The values of these cars started increasing the moment they sold out, which means they're bound to become garage queens.

If you're rich enough, hooning a $220k Porsche on a gravel road is no big deal. If you scrape the roof, you simply buy another. But since there isn't another available, you'll be more careful.

Best to park it and leave it alone; rich people don't stay rich by gambling with appreciating assets.

So the vast majority of these vehicles will be stuck in a garage, and the amazing Rallye Mode will never be engaged. Owners will never use the Rallye Launch, explicitly designed to launch the Dakar hard on a loose surface. It's destined to become yet another car you'll only see on special occasions, like when an owner wants to make a splash at a Cars & Coffee.

The 911 GT3 and GT3 RS are no longer the most notable models in the range. If you really want to draw a crowd, you'll have to go in the officially lifted 911.

People will stare at it, discuss the various components needed to make it work (like the cooling system from the 911 Turbo since the engine was meant to work hard), and then the owner will return to their parking spot on a route that takes them nowhere near a muddy road.

It makes us sad when we think about what could have been. After the first spy images emerged, we called it the 911 Safari. It had become the colloquial name of 911s on 'roids, so it was a safe bet. A few months later, the "Dakar" name emerged, and sure enough, Porsche confirmed the name right before the car's launch.

It was a bold move. To us, it sounded like a statement of intent.

Porsche doesn't do things lightly - look at the new GT3 RS, which has more downforce than the racing car it's meant to mimic - so we were 100% convinced Porsche would take the 911 Dakar to the Dakar to compete.

If you look at all the information leading up to the launch, you'd have come to the same conclusion. First, the name. Secondly, Porsche sent 911s with portal axles up a volcano.

Those portal axles aren't an option on the Dakar configurator - we looked everywhere to make sure - so why else would Porsche equip a 911 with portal axles? We were convinced it was a test disguised as a publicity stunt.

Alas, this is not the case.

But we still can't fathom why. Porsche would be a shoo-in for a win, too. Maybe not the overall win, but a class win for sure.

The Dakar Rally is divided into classes. The hero cars like the electric Audi and the Gazoo Racing Hilux are bespoke and have nothing in common with the cars they're supposedly based on. The Hilux, for example, is a mid-engine racing machine with a custom engine setup. In fact, the suspension setup on each axle costs around the same as a road-going Hilux.

But there's also a class for production cars, and Toyota owns it every year. It sends two Land Cruisers; all they have to do to win is finish. Speed doesn't play as significant a role as in the top-tier categories.

A 911 Dakar with portal axles would have easily decimated these Land Cruisers. While speed isn't a factor, we can easily see the 911 with its GTS engine setting an average speed of roughly 10 mph more than the Cruisers.

It would have been an easy win, but Porsche missed out. We see this as a missed opportunity since the Dakar got its name from a Dakar-winning 911.

Repeating that victory would be akin to the Ford GT going back to Le Mans 50 years after its original win, and beating Ferrari again. It would have cemented the 911 Dakar's name in the history books.

Sadly, it turns out the 911 Dakar will never be anything more than a garage queen. 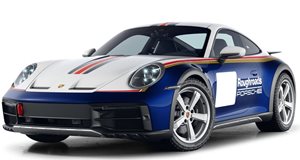