The Mazda5 Is The Awesome Stickshift Minivan You Should Buy

Having a family doesn't mean you need a boring car.

The list of enthusiast-friendly cars becomes pretty short after having a couple of kids. New parents could buy a massive, guzzling SUV like a Chevrolet Tahoe or if they are more well-off, a Lincoln Navigator, but those are now extremely expensive to buy and run. The most likely scenario is that they'll end up with a minivan.

But minivans don't have to be boring. From 2008 to 2015, Mazda built a minivan that enthusiasts could love. It was called the Mazda5, and should appeal to anyone worried about swapping their sports car for something more practical.

The Mazda5 was technically what the Europeans call an MPV (multi-purpose vehicle), meaning it was smaller than any other minivan sold in the United States. Mazda sold the first-generation model from 1999 to 2004 and decided to import the second-generation to the US from 2006 to 2010 and the third-generation model from 2011 to 2015. It was also sold around the world badged as the Mazda Premacy, Ford Ixion, Ford Lio Ho, Ford i-MAX, and Nissan Lafesta Highway Star.

Since the Mazda5 was so small by minivan standards, it felt nimble to drive while still offering plenty of passenger space. US safety regulations required Mazda to sell it as a six-seater, ditching the seventh jump seat mounted in the middle of the second-row as part of the automaker's "Karakuri Seating System." The Mazda5 was always underpowered but it was notably one of the most fun-to-drive minivans ever sold in the US market.

Even when new, the Mazda5 was never costly compared to larger minivan alternatives like the Honda Odyssey or Toyota Sienna. The 2015 base model carried an MSRP of $22,000, making it exactly $8,000 less than the least expensive Odyssey at the time. Today, high-mileage second-generation models can be found for under $3,000 and even a much newer example with low-mileage can be found for just over $15,000.

These cars no longer have factory warranty coverage but the Mazda5 is known to be pretty simple and reliable to run. We happen to prefer the stylish pre-2011 model before Mazda incorporated its "smiley face" grille but the facelifted cars do have some notable improvements, including a newer engine.

The biggest downside to the Mazda5 minivan is a lack of a more powerful engine option. From 2006 to 2010, it was only offered with a 2.3-liter four-cylinder producing 153 horsepower. Yes, this sounds pretty boring considering a new Odyssey produces 280 hp, but the Mazda5's engine could be paired to either a four- or five-speed automatic (yawn) or a five- or six-speed manual. This means the Mazda5 was likely the last minivan to be sold with a manual transmission in the US.

For 2011, Mazda updated the engine to a 2.5-liter but it only produced 157 hp, just four more than the 2.3. A six-speed manual became the standard transmission while a five-speed auto was available as an option. Even with the manual, the 8.2-second 0-60 mph time was pretty uninspiring but the Mazda5 was pretty fun to drive around corners (for a minivan). Since the Mazda5's platform didn't differ too muchfrom the Mazda3, there isn't much to stop an ambitious owner from swapping in a MazdaSpeed3 drivetrain to create the ultimate MazdaSpeed5.

Inside, the Mazda5 is exactly what you'd expect from a Mazda-built car of the era. The plastics were fine and the technology was average for the time. Mazda didn't drastically change the overall layout of the cabin from one generation to the next buy you can clearly detect a newer steering wheel, gauge cluster, and glovebox storage area on the third-generation car. If you look closely at the gear knob on the manual model, Mazda fans may notice it is the exact same one used in the NC generation MX-5 Miata.

Mazda was able to package six seats into the 5's diminutive wheelbase, with two seats for each of the three rows. The cargo area boasted 11.7 cubic feet of storage with the third row up, which increased to 27.5 cubic feet when folded. With all three rows folded, the Mazda5 could hold up to 44 cubic feet. This is around half of the hauling capacity of a larger minivan but it may be acceptable depending on your family's needs. Mazda even included some clever storage areas under the second-row seats. As a positive side effect of the Mazda5's small size and lack of power, it achieved excellent fuel economy ratings of 21 mpg in the city and 28 mpg on the highway.

If Mazda ever built a MazdaSpeed5, we might be talking about it as the coolest minivan this side of a Mercedes R63 AMG. This dream never became a reality but the Mazda5 was still a fun-to-drive minivan that is now affordable and reliable to own. It still offered a manual transmission, a rarity for a minivan in the US, and its small size meant it was far more nimble than its rivals. So if you have a budding family and want a minivan that doesn't completely suck to drive, check out a used Mazda5. 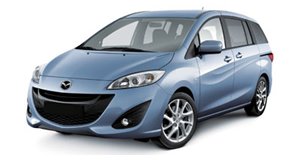 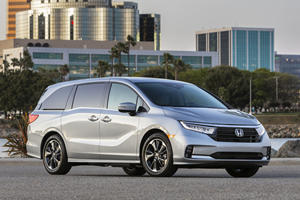