The Mercedes-AMG GT Is Already A Used Bargain

The time to buy one is now.

Taking on the Porsche 911 is not an easy task. The car has been in production since 1963 and has arguably the most loyal following of any sports car in existence. Most people thought Mercedes was daft to challenge Porsche with its own bespoke sports car but perhaps those people have never watched Formula One.

Designed by the company's hardcore AMG division, the AMG GT is a sports car that, at the surface, looks more like a Corvette than a 911. It's brash, front-engined, and V8-powered. You know, all of the calling cards of a great American sports car. But delve a little deeper and you begin to see that the car has more clever engineering than you initially thought. A brand-new AMG GT is priced similarly to the 911 but having already been on the market for five model years, you can now get a great price on a used one.

The Porsche 911 takes itself pretty seriously. And in most scenarios, it won't cause people to turn heads when you arrive in one. The AMG GT, on the other hand, enjoys making exhaust burbles wherever it goes. It loves being the center of attention. From the moment you fire up the twin-turbo V8 engine, you get the distinct impression that AMG wanted to design a car that was all about occasion. A precision driving instrument it may be, but fun is at the core of its mission statement. That's rare for a German car.

A person who purchases an AMG GT wants the best of what a Porsche 911 and a Chevy Corvette has to offer: European sophistication mixed with a splash of lunacy. While not a direct successor to the popular SLS, the AMG GT is more of a driver's car and should be on your shopping list. Six-time F1 champion Lewis Hamilton even helped with its development.

A 2020 Mercedes-AMG GT Coupe will set you back $115,900 and you'll have to pay $127,900 to drop the top in an AMG GT Roadster. But believe it or not, the starting prices of used examples are less than half the cost of a new Roadster. Used AMG GT from 2016 can now be found starting in the mid-$60,000 range. And since Mercedes only offered the GT S in the first model year, all of the least expensive examples on the market have the more powerful version of the V8 engine.

The Roadster wasn't released until the 2018 model year, so prices are a bit higher. You can pick one up starting at around $85,000. You can even find plenty of examples of the Coupe and Roadster with a certified pre-owned warranty, starting at around $75,000. Mercedes' CPO program includes a one-year, unlimited-mile warranty with roadside assistance.

Like the 911, the AMG GT is offered in a variety of performance variants. All versions are powered by an M178 4.0-liter twin-turbocharged V8 mated to a seven-speed dual-clutch transmission but the output ranges drastically. Base GT models produce 479 horsepower while the GT S increases that figure to 515 hp. The AMG GT C was introduced in 2017 as a bridge between the S and R models, producing 550 hp and getting the widebody treatment of the R.

If you live at the track, the AMG GT R is the most race-focused with 577 hp, good for a 0-60 mph time of 3.6 seconds. There's also an AMG GT R Pro version that's even more extreme. All versions (except for the Pro) are available in Roadster form, though you'll have to sacrifice fractions of a second around a track and on your 0-60 mph runs.

Mercedes has the best interiors on the market right now and the AMG GT is no exception. Whereas the 911 is all about minimalism, AMG set out to wow the driver and passenger with an aggressive yet somehow elegant cabin. A massive center console houses all of the important drive controls and further up the dash, a row of air vents sits like a string of pearls to add some bling to the cockpit. In 2020, Mercedes improved the GT's cabin with a larger infotainment screen, digital gauges, a revised center console, and a new steering wheel.

As expected of a two-seater sports car, the AMG GT is not the most practical car in the world. However, the Coupe offers a fairly acceptable 10.1 cubic feet of storage courtesy of its hatchback design. Opting for the Roadster downgrades the cargo space to a conventional trunk, which only offers 5.8 cubic feet of space. As for fuel economy, even the most frugal version of the AMG GT drinks fuel at a rate of 16 mpg in the city and 22 mpg on the highway.

The Mercedes-AMG GT is the type of exciting sports car we rarely see in this day and age. It offers a precision driving experience with the lunacy typically associated with American sports cars. A brand-new one is an expensive proposition, priced mainly for Wall Street types who don't want a 911 to impress their clients. But if you save up your pennies, a pre-owned example is relatively affordable and will still enable you to move in the same circles as a brand-new one. Above all else, the AMG GT is a laugh riot and we highly recommend that you try one. 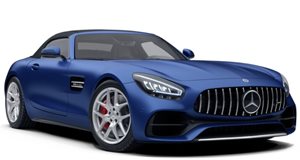