The Mercury Marauder Is The Badass Performance Sedan You Forgot

And now is the time to buy one.

The market for rear-wheel-drive performance sedans is shrinking rapidly. Your choices have become extremely limited as sedans continue to be phased out in favor of SUVs and crossovers. Not only are cars like the Mercury Marauder a dying breed, the brand that built it no longer exists. The Marauder name first appeared back in 1963 as a trim option for the Mercury Coupe, later returning in 1969 as a fastback version of the Marquis.

Mercury decided to bring back the Marauder name in 2003 for a high-performance model based on its full-size Panther platform, which underpinned the Mercury Grand Marquis, Ford Crown Victoria, Lincoln Continental, and Lincoln Town Car. The car mostly known for limo, taxi, and police services was now being powered by a Mustang heart. And with a badass name like Marauder, how could this be anything other than awesome?

If you do manage to find a nice one, a used Marauder represents an affordable entry into a class of car that doesn't really exist anymore. The Panther platform was famed for its reliability but the Marauder added important performance components not found on any of its siblings aside from the Ford Police Interceptor. The Marauder perfectly fits the mold of a sleeper sedan, an unassuming car with excellent performance chops.

Marauder prices range drastically depending on price and condition and since supply was so low to begin with, there are only a few dozen up for sale at any given time. Even so, used prices for examples with over 100,000 miles start at just over $5,000 while more well-kept examples can command around $20,000. Being built on a platform known for handling over one million hard service miles with ease, a used Marauder should put up with your abuse.

It may seem crazy to think Mercury built a performance version of the same car used by taxi drivers, but this same platform was also heavily used by the police in the US to chase bad guys. The initial concept car was set to use a supercharged V8 power plant but the production version ended up using a 4.6-liter modular V8 from the Mustang Mach 1, producing 302 horsepower and 318 lb-ft of torque, which were stellar numbers back in 2003. Power was routed out to the rear wheels through a 4R70W four-speed automatic linked to a limited-slip differential.

Many owners on the aftermarket have even swapped in a manual transmission and added the supercharger from the Mustang Cobra. Mercury made sure the chassis could handle the additional power of the Mustang V8 by adding heavy-duty suspension components from the Police Interceptor, rack-and-pinion steering to replace the Grand Marquis' recirculating ball system, and an aluminum driveshaft.

Most of the Marauder's interior components are shared with other Panther platform cars but Mercury did make a few changes to set it apart from the others. For example, the Marauder featured a console-mounted shifter, which was also found in the Crown Victoria LX Sport and Grand Marquis LSE. Other versions of the Panther setup used a column-mounted shifter, allowing for a bench seat upfront.

Leather seating came standard and all of the wood trim was replaced with satin aluminum trim. Mercury also designed unique aluminum instrument gauges with a 140-mph speedometer and a tachometer, which required a relocated voltmeter and oil pressure gauges in front of the shifter.

You may not be wowed by early 2000s Ford interior plastics but the interior volume of Panther vehicles is larger than many luxury sedans sold today. The Marauder's lengthy 114.7-inch wheelbase allowed for a spacious backseat with 38.4-inches of legroom (more than you get in a brand-new Ford Taurus). Cargo capacity is equally spacious with 20.6 cubic feet of storage, though the Panther platform's design did not allow the rear seats to fold into the cabin. Fuel economy isn't great with EPA ratings of 17-mpg in the city and 23-mpg on the highway.

Finding a modern performance sedan without insane maintenance costs and spotty reliability isn't easy in 2019. There are still a few budget options out there but finding one with a V8 engine can be pretty costly. The Mercury Marauder offers mafia hitman styling, a Mustang heart, and plenty of available upgrades on the aftermarket to make it your own.

Since Marauder sales fell well below Mercury's initial predictions, there aren't many of them on the used market and they could become collectible in the future. Now is the time to buy a Marauder before prices skyrocket. 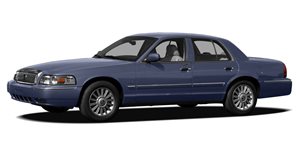