Including a couple of dubious Dubai claims...

The United Arab Emirates (UAE) is legendary for the amount of wealth in its main cities. We're talking insane amounts of oil money here. Dubai that has air-conditioned bus stops, ski-slopes in shopping malls, and traffic jams that look like supercar meets. Occasionally, you'll even spot someone in a car that's taking their pet Cheetah for a ride in the passenger seat.

Our focus here though is the kind of cars that oil money can buy, and in a couple of cases, money could but probably didn't buy. There's everything from solid gold cars to the most exotic police cars on the planet, so let's get cracking.

It's not the only over the top police car in Dubai, but the Dubai police Veyron was certified as the world's fastest police car by the Guinness Book of Records in 2017. Major Sultan Al Marri of Dubai Police's General Department of Transport & Rescue says of the Veyron police car: "We're not looking to just show off with the car, we're looking to show tourists how friendly the police is here in Dubai."

According to the reports, this monstrous display of wealth was unveiled at the Dubai Auto Show to celebrate the 50th anniversary of the Mercedes-Benz SL550 back in 2007. It's said to have been paid for by the billionaire Saudi Prince (Amir) al-Waleed bin Talal bin Abdul-Aziz, who is a member of the Saudi royal family and one of Time magazines top 100 most influential people in the world for 2008. The car reportedly cost $4.8 million dollars, is covered in 300,000 diamonds and, according to reports, Prince Waleed was charging people $1,000 to touch the car.

We say 'reportedly' as, according to Snopes.com, it has been identified as a crystal-encrusted SL 600 worth about $1 million by a company called Garson USA and was displayed at DUB Magazine's Custom Auto Show & Concert in 2008. It's entirely possible Prince Waleed does own a diamond covered car, but if this was it then the value of the diamonds would be well in excess of $4.8 million dollars.

What's better than a $4.8 million car in Dubai? A $7.5 million car of course. It's a 1:8 scale model created by Robert Gulpen Engineering in Germany and was carved from a 500-kilogram block of solid gold and uses other precious metals for detail. It was auctioned off with a hefty amount going to charity, and no doubt needs a well-supported shelf to display it on.

If you want to drive a gold car, it's going to have to be plated in the precious metal. However, that's not very expensive for someone with Turki Bin Abdullah's means, so he had a series of cars gold plated including a Bentley, a Ferrari, and Brabus G700. He also likes to have them transported overseas so he can show off his wealth, which must be nice.

This isn't gold plated, the body itself is claimed to be made of white gold. Cost is reported at around $2.5 million and the V10 quad turbo has been ramped up to a claimed 1,600 horsepower and makes a claimed 1/4 mile in 6.89 seconds running on biofuel.

We suspect we should probably use the world claimed a fourth time though. We think it's probably a chrome-like wrap, or created using the same paint and polishing technique used to fool people into thinking a Dubai owned Audi was made from solid silver back in 2005.

This one we do believe and it's incredibly crafted and insanely beautiful. It's a Veyron Grand Sport detailed with porcelain inlays by the Royal Porcelain Factory in Berlin. It's been painstakingly crafted to eliminate surface lines between the colors and the effect is stunning and the word masterpiece is not hyperbole. It was sold to somebody in Dubai for $2.5 million dollars.

While Godzilla is a stunning piece of performance engineering, it's pocket change to an average Dubai billionaire. It was built in Japan with Kuhl Racing and using the skills of expert engraver Takahiko Izawa to create the intricate patterns in the gold. Once it was displayed in Dubai, the inquiries from the elite wanting to buy the car came quickly.

Cars Coin is a company based in Dubai that hand decorates car with a layer of coins. Any kind of coin is going to look… something, but you can choose modern or antique coins. A Range Rover is perfect for the project as the weight of those extra coins adds up to hundreds of kilograms.

Lamborghini only built five coupes of its 50th-anniversary car and kept one for itself and one for testing. The other three were sold, and the chances of seeing one are slim but get bigger if you go to Dubai. Al Jaziri Motors confirmed they sold one, and the other two went to the US. The buyer remained anonymous, but the $3.9 million price tag is public knowledge.

W Motors is a Dubai based company, and you'll remember Lykan Hypersport jumping from one building to another in Dubai if you've seen Furious 7. The Lykan Hypersport has a claimed 0-62 time of 2.8 seconds, and one of the few people that can test this out is a driver on the Abi Dhabi police force. The department bought one in 2015, and we suspect the chances are high that there has been a race between this and the Dubai police's Veyron late one night on a long stretch of desert road. 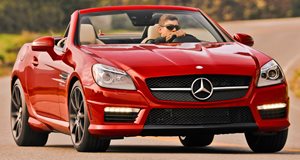