The Volkswagen CC Is Your Budget Ticket To Luxury

Back in 2004, Mercedes-Benz created a new segment called the four-door coupe, to help sell the then-new CLS. It was based on a conventional E-Class but featured a fastback roofline typically only found on two-door cars. It only took five years before the idea took off and Volkswagen brought out the first affordable four-door coupe, the CC. VW built the CC from 2009 to 2017 before eventually replacing it with the even more beautiful Arteon.

It was originally called the Passat CC (Comfort Coupe) and shared its platform with the mundane mid-sized sedan but the CC was longer, lower, and wider. We think the CC is one of the best-looking modern VW products and used examples have now become a bargain.

The VW CC is a great used purchase because it looks far more expensive than it really is. Originally, the car didn't even have a 'CC' badge on it, so most people didn't even know what kind of car it was. VW managed to take the concept of the CLS and bring it to an affordable price while also offering a plush ride, luxurious interior, and strong powertrain options. Reliability is a bit of a question mark with used German cars but the CC is still available as a certified pre-owned car, which should alleviate some of the maintenance costs. The CC is also far simpler than most of the highly depreciated German luxo-barges we recommend, so it shouldn't be too costly to own.

In the United States, VW only offered the CC with two engine options - a 2.0-liter turbocharged four-cylinder and a 3.6-liter VR6. The 2.0T was offered with a six-speed automatic (later a six-speed DSG) or a rare six-speed manual. Power was sent to the front with optional all-wheel-drive, though the manual option was only available with drive going to the front wheels. This engine produces 200 horsepower and 207 lb-ft of torque, resulting in a 0-60 mph time of around 6.5 seconds.

The larger V6 engine produced 280 hp and 265 lb-ft of torque going out to AWD only. Even though this engine produced more power, it only resulted in a slightly quicker 0-60 mph time at the expense of fuel economy.

VW made sure the CC stood out over its more mundane sedans with a more luxurious, Audi-like interior. The seats were available in all black or a cool two-tone with black and beige and all of the materials felt on par with most entry-level luxury cars. Depending on the trim, the CC could feel pretty basic on the inside but higher trim levels included heated and ventilated seats, built-in navigation, and smartphone connectivity (on later models). The CC feels like an excellent middle ground between a mainstream sedan and a more expensive luxury model.

Due to its coupe-like roofline, the CC was slightly compromised compared to standard sedans like the Passat. And unlike its successor, the Arteon, it featured a conventional trunk rather than a hatchback, limiting practicality. The trunk still boasted 13.2 cubic feet of space with the ability to fold down the rear seats for additional storage and the back seats themselves were fairly roomy with 37.3 inches of legroom. Fuel economy was an acceptable 22/31/25 mpg city/highway/combined with the four-cylinder and FWD, but with the V6 those figures drop to 17/25/20 mpg.

The CC remains one of the most handsome cars VW ever produced and even with the new Arteon garnering rave reviews, the CC is a great used purchase. Prices have now dipped to a point where the CC is affordable on most budgets and CPO examples are plentiful if you are concerned about German reliability. So if you are looking for coupe-like styling, a cushy ride, and a great price, you should consider a used VW CC. 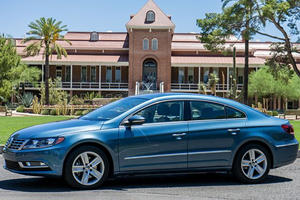